Ladder is in a bit of a weird place in my opinion, and I was hoping to start here with some suggested changes before V4.2 came out. This should branch off into other chassis bits too.

Just dropping these here on the forums so they don’t get buried on Discord. Please weigh in on what you think of Ladder V. Everything else. 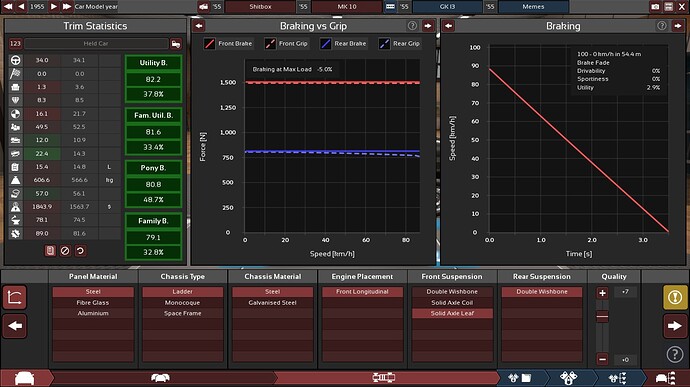 20200613164530_11366×768 176 KB
Just one bit of context. This is a 1955 small body car. The held stats are for the same car but monocoque, while the new stats are for a +7 quality ladder, with tweaks to the car to get close to accurate/similar stats. The ladder is worse in almost every way except for Utility, barely, and Offroad, which appears to be mostly attributed to “stability” for some reason.

One thing I will note though, is that the ladder has significantly less ET when it’s not quality spammed to match the monocoque standard. Chassis stiffness is half though, and the safety as can be seen are garbage.

For reference too, the car was originally built in the Campaign targeting Archana and the fleet segment.

Thanks for that! I shall put that on my list of things to look into for LCV4.2