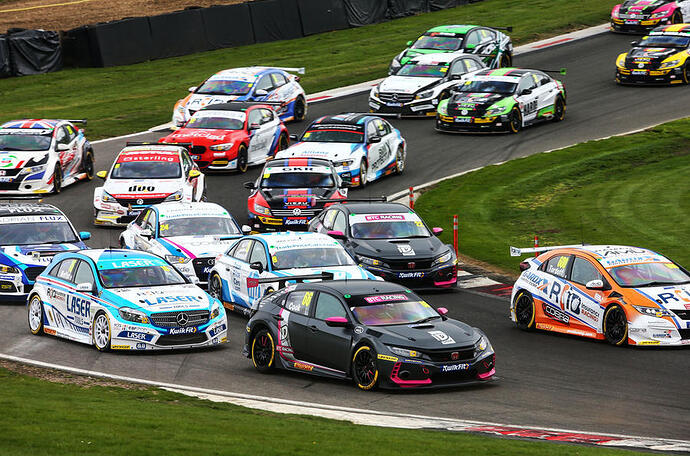 btcc-04_0_0900×596 153 KB
It came to my mind recently. But how about a challenge series where each challenge would have your cars / brands compete in a form of a spec racing series. Each challenge will focus on a certain series whether fictional or IRL. This could focus on series such as WRC, BTCC, GT, IROC, Supercars, Pro Mod NHRA, etc.
Engineering will be key, however, keep in mind you’re going to be following the rules and specs of each specific series, so no teams should try to cheat their way to take advantage of others. Results of each contest would be tested on 3 race tracks, better overall in average lap times that meets the rules will win.

Sounds fun don’t it.
I’m thinking when v4.2 comes and resets the game, that this challenge series can be put to use.
overall thoughts and discussion.

This is just throwing an idea out.
Hopefully bringing a discussion and ironing out ideas and making specific rules.
This is more aimed like a simple format so each host could put out rules and results of each challenge on possibly CSR / CSC type of deal.
No sort of role playing or driver profiles needed.
Just a car that meets spec, 3 random race tracks that shall not be discussed until after submissions close. Results of each and better average lap time determines the victor.

Are you sure you know what you’re in for with this? Making a single racing challenge that’s reasonably realistic, and yet still fun to participate in is a gigantic undertaking, let alone several of them…

It is indeed a challenge, I did run TGR, which was huge in itself, however the RP aspect kind of ran away from me and there were only a few active members doing so.
Being this idea was going to run along the lines of a simplified system unlike say ARXL. It could have somewhat of a CSR vibe with different host per challenge.
Which honestly that can be a bit of a hassle for others that are not familiar with motorsports and what goes on behind them. So this probably will not be a popular series to run unlike CSR / CSC/ AGR etc.
I’ve been perma-muted by you since October on the AOD. so I can’t really discuss ideas and plans there.

I just throw the idea, if its going to be a challenge series, you may want to start from early years with the GT championship idea, and when the submits are done with the year limitation, you continue with the series, but everyone has to submit the same car with new technology because of the new year limitation.