Founded in 1996, the first Taylor Car started develop immediately. After several unapproved variations, the 1st car produced known as the Micro MK1, was ready for production by 1998. After that, more models were created and more sub-brands followed (Monster in 1998, followed by Solaris in 1999). Many of the models had innovative technology for it’s time, but the first were quite basic and focused on affordability. 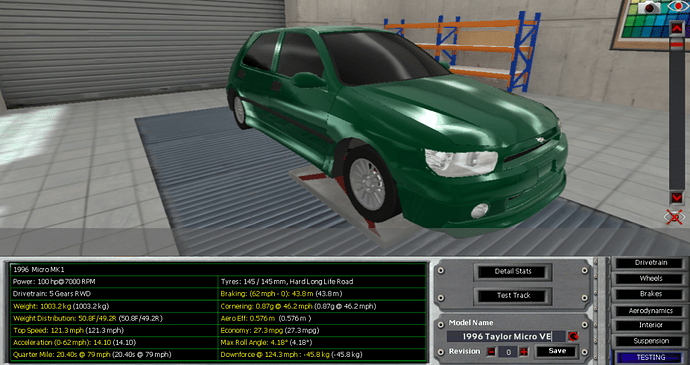 MicroVEMK1_zpse4b55354.png1024×542 507 KB
Taylor was the first brand in the group’s founding, and it’s first creation was the Micro in early 1998, a compact car that made value it’s first priority. The Micro VE was straightforward, a simple 5 seater, 5-door hatchback powered by a simple 1-liter Inline 4 with 100hp. Being a small engine, and the car weighing just over 1000kg, this car wasn’t a speed demon by any means. But it’s performance was modest for a entry-level city car at the time, Priced at $8,630 for the 5-spd Manual and $9,240 for a 4-spd automatic, the Micro VE definately was great value in the compact class. 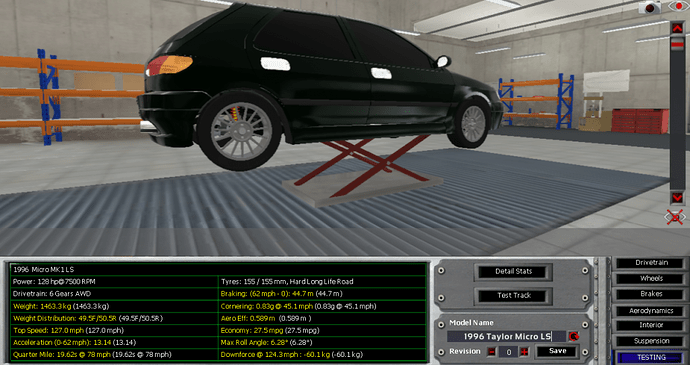 MicroLSMK1_zps5be29178.png1024×542 497 KB
Arriving in fall 1998, the Micro LS was the 2nd trim package for the Micro. Not only did the car gain upscale features like a Leather Interior and a 8-Speaker stereo system with a 6-disk CD changer, it gained extra power from a 1.2-Liter DOHC Inline-4 mated to either a 6-speed Manual or 5 speed Automatic, as well as the option of All-Wheel-Drive. 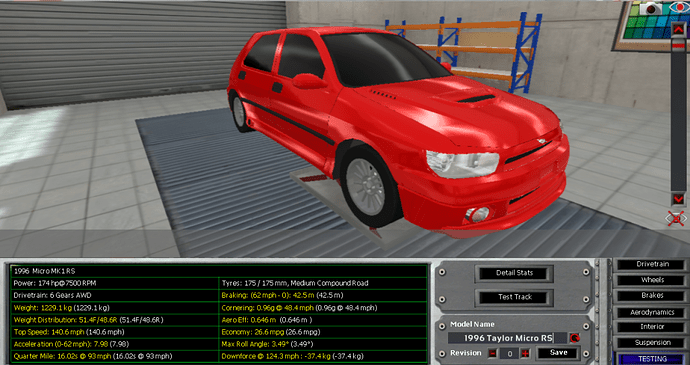 MicroRSMK1_zps3da65033.png1024×542 510 KB
In Summer 1999, Taylor wanted to boost sales of the Micro by spicing it’s small hatchback up a bit. This resulted with the Micro RS. Taylor increased the compression and added a Turbocharger to it’s 1.2L Inline-4 and then tweaked the 6-spd Manual and 5-spd Auto gearboxes, as well as used lighter materials in the interior and made it’s All-Wheel-Drive system standard. This turned the basic, bargain-priced into a potent, yet still quite affordable AWD Hot Hatch. 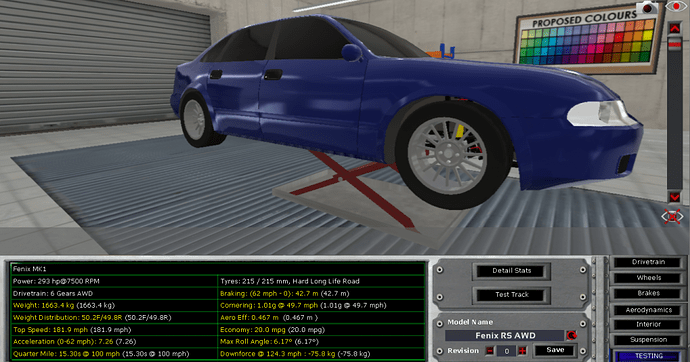 FenixRSMK1_zps67e9eed0.png1024×538 502 KB
Around the same time the Micro RS came out, Taylor also was ready to add a new midsize sports sedan to the lineup. This became the Fenix. While many American Automakers at the time were using V6s and V8s for their high-performance sports sedans, Taylor took inspiration of European and Japanese Sports cars and instead built a Straight-6 to apply to the car. Taylor’s EQ Straight-6 engines were in development since the Micro’s release, and by now it was ready for application. Combining the Straight 6 mated to a 6-spd manual or 5-spd automatic with a Double Wishbone Suspension and All-Wheel-Drive tuned for more power to the rear wheels resulted for a car that had the combination of American styling and European Sports Car handling. 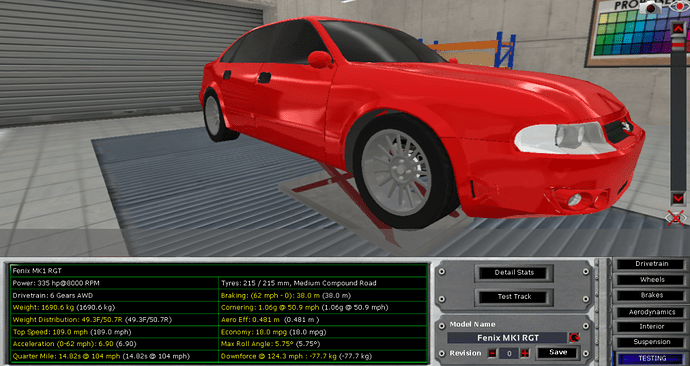 FenixRGTMK1_zpsa1541d9f.png1024×544 503 KB
While the Fenix’s Straight-6 was created in 1998, Taylor’s newly created racing team “Pikachu Racing” was turned into the development team of a more potent version of a already impressive EQ-series engine. Where Direct Injection was not mainstream in cars until 2003, Pikachu Racing experimented with this technology in it’s Fenix GT-3 Racing car specifically for development for it’s application in future Taylor Cars. In early 2000, Taylor announced that the new EQ30-DI engine for the Fenix RGT will feature Direct Injection, standard RWD, and only available in a 6-speed Manual. With Direct Injection not a proven technology for use in street cars, the EQ30-DI was ahead of it’s time and the build was pricey. However, this expensive downside became a huge advantage as it was nominated as one of the “10 Best 6-Cylinder Engines in the world” by 2001, a rare feat for a newly-made manufacturer just 5 years old.

I do really like the Fenix RGT. looks pretty similar to audi A4 but it does have a nicer and more detailed design that the original A4.

) better. Just keep up that work. i’m looking forward for your next designs ^^

I really liked that 1.0 engine. Is it aspirated or turbocharged?

I really liked that 1.0 engine. Is it aspirated or turbocharged?

The 1.0-Liter is Normally Aspirated with VVT, and VVL. It allowed for a smoother powerband that is suitable for a commuter car. I wanted to keep the engine clean and efficient for a car in the late 90s while being long-lasting (the Turbocharger made the 1-liter engine require a lower compression as well as a heavier fuel mixture, which reduced engine life and increased emissions).

However, I did carefully adjust the quality setting to optimize the power to near the maximum that 1-liter engines were producing at the time, while keeping the build hours under 110hrs. 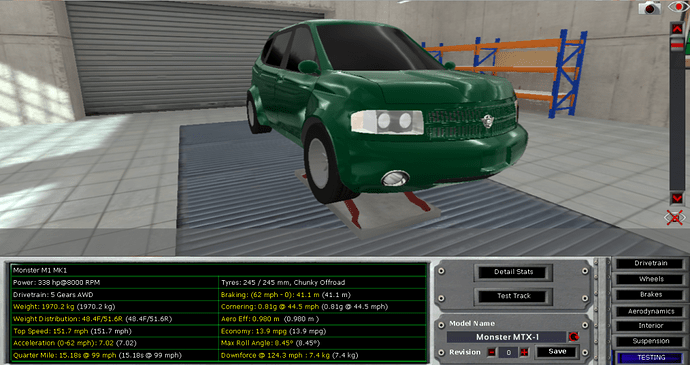 MonsterMTX-1MK1_zps6f1c3db7.png1024×542 503 KB
The Taylor Automotive Group was wanting to put itself in the SUV business, and Monster was the result. The first of it’s 4x4s added was the MTX-1, a V8 Midsize SUV with serious Off-Road potential. Unlike many pure 4x4 brands at the time (Land Rover, Hummer, Jeep), Taylor wanted to have value in the Monster brand. The MTX-1 may be a off-road ready 4x4 with locking differential, a V8 with great low-end torque and frame protection plates standard, but it’s made affordable thanks to a Simple 5-seater layout with only the basic and essential features (4-speaker Stereo, Hand Crank windows, Airbags, etc.) standard. Due to the lack of higher end features, it was lighter than most midsize SUVs which gave it better performance on and off the road. However due to the lack of fuel economy, Taylor decided to cancel this model in 2001 to make room for a redesign, making this generation of the MTX-1 short lived. 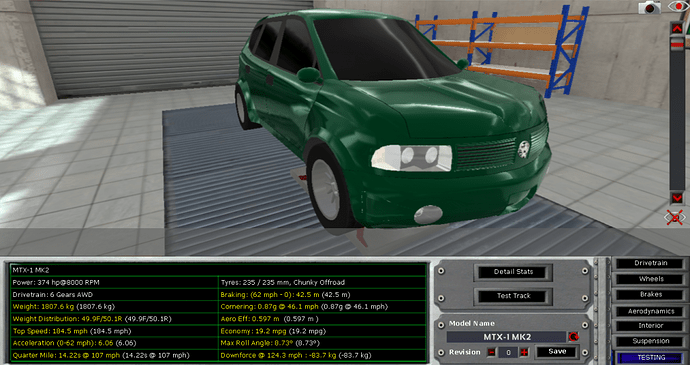 MTX-1MK2_zps3688fd0b.png1024×543 509 KB
After a issue with fuel economy in the first-generation Monster MTX-1, Taylor quickly responded and redesigned the SUV for the 2001 model year. Despite appearing almost similar to the original, aerodynamics have been improved and the engine had been overhauled. Taking technology from Taylor’s Fenix Sports sedan, cast-iron engine block and steel exhaust system was taken off for a much lighter Aluminum block and exhaust system, the steel body panels were replaced with aluminum (frame and reinforcements were still made of steel), the valve timing and compression was improved, and the 5-speed gearbox was replaced for a 6-speed. Due to these tweaks the MTX-1 was 163kg lighter, as well, power and fuel economy was increased. Off-road capabilities were not sacrificed in the creation of the 2nd-generation MTX-1, in fact the same tweaks for fuel economy have also improved it’s hill-climbing ability. Those improvements may have increased cost, but the noticeable gains in on and off-road performance as well as fuel economy was definitely worth it. 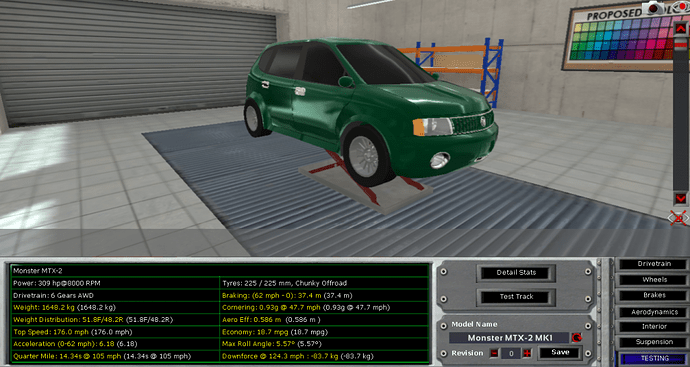 MonsterMTX-2MK1_zps2ec8053b.png1024×545 512 KB
After the Monster MKT-1’s redesign, the bargain price that lured many to the SUV was lost in order to boost fuel economy. However, Taylor wanted to keep a value-focused SUV in the lineup. At the same time of the MTX-1’s redesign, they also made a smaller but capable model to maintain the Monster Brand’s value-based approach. The MTX-2 may be smaller in size, but was still just above the minimum of the midsize class. Despite the smaller dimensions, It had plenty of room for 5. The engine used was a smaller version of the XT engine line, it used technology from the 1st-generation MTX-1 but due to the lightness of the MTX-2, it was almost as quick and fuel-efficient as the 2nd gen MTX-1. 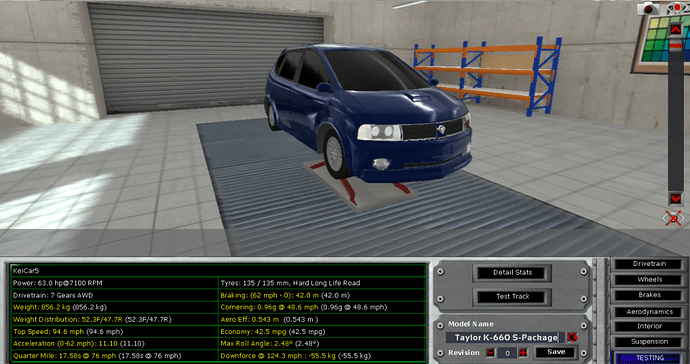 K660_S_zps93821557.png1024×541 513 KB
In 2013, Taylor started selling cars in Japan. Though the Micro was a decent Class-5 (under 2 liters) seller in Japan, Taylor wanted to start competing in the most competitive class in Japan, the Kei-car market. Kei-Cars had to meet strict standards, such as a 660cc engine with no more than 63hp, a maximum length of 11.2 feet, and hold no more than 4 passengers. Having the knowledge of Japan’s cars and regulations, this was able to meet all the qualifications. The K-660 was Taylor’s challenger to popular Japanese Kei-Cars such as Suzuki’s Wagon R, Daihatsu’s Move, and Mitsubishi’s EK-Wagon. Determined to not be a sales flop like the last foreign Kei-car entry, Smart’s Fortwo-K, Taylor wanted to style it’s Kei-car in a way that has appealed to Japan’s Kei-Car market for so long by providing a somewhat boxy 5-door wagon style.
Manufactured in Japan, the K-660 was available in FWD or AWD, a 6-spd manual or 7-speed CVT with Manual mode, and available in various optional styling packages. With plenty of torque, very sharp handling, and a plush but compliant ride, it was great in the tight streets and mountain roads. Due to the features and performance, the K-660 was a successful in taking a decent portion of a competitive market, a feat that hasn’t been successful with other Kei-cars from brands originating from outside Japan. 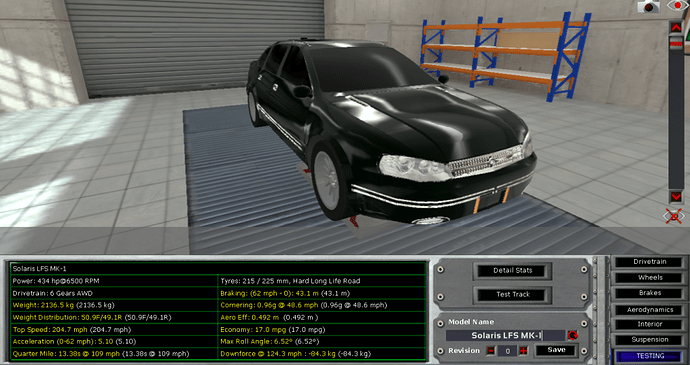 LFSMK1_zps87939fcb.png1024×543 529 KB
Taylor was ready to get into the Luxury market with it’s new Solaris sub-brand. The LFS (Luxury Full-Size Sedan) was the first car built in the lineup. Both the interior and engine were Hand-Crafted, making it truly a premium vehicle in terms of price. The LFS’s 7-liter V8 was not only quiet, it provided smooth but quick performance and fuel economy that was above-average for a hand-crafted luxury sedan. The aerodynamic design used may of not been the best looking for a high-end luxury sedan, but it provided reduced drag, which helped this car achieve a top speed over 200mph. A feat that is rare in a luxury sedan at the time. Customers can choose a variety of options, including a 6-spd Manual or 6-spd Auto gearbox, and either Rear or All Wheel Drive. With the perfect balance of luxury and performance, this made expectations very high for future models, including supercars. 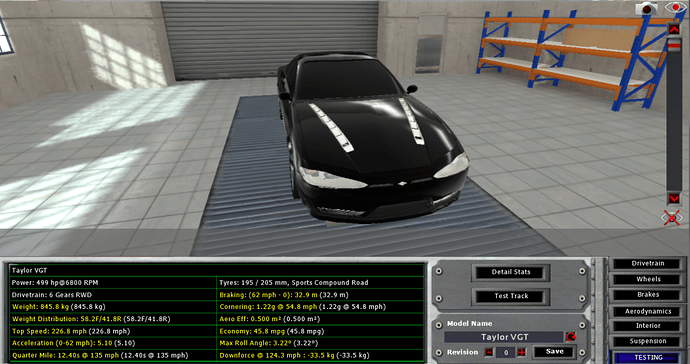 TaylorVisionGranTurismo_zps6a0acd8b.png1024×541 523 KB
The Vision Gran Turismo project was created by Japan’s Polyphony Digital during the creation of their new PS3 game, Gran Turismo 6. Working with various designers inside and outside the automotive industry to show off their designer’s vision of the future of the automotive industry would look like, these cars also would be added to GT6 or a future Gran Turismo game. Anyone from the design and vehicle industry was welcome to submit their designs, and Taylor became one to take on this challenge. Utilizing a car built from the ground up, it appeared like a future Solaris-Branded model and featured so much technology that made it different from many of the other contenders.
The Taylor VGT was a vision of the ultimate lightweight eco-supercar. Fully constructed and functional, the VGT weighed less than 900kg but was more durable as other small supercars in the modern era, thanks to the combination of carbon-fiber, titanium, and magnesium used throughout a car slightly larger than a Tesla Roadster. The drivetrain setup was also potent and agile but also economical, using a 3-mode hybrid system that combined a front-mounted 3-liter Turbocharged Inline 4 mated to 2 rear-drive wheel-mounted 40kw electric motors and a Transmission mounted KERS system. Pushed to the limitations of what was currently available, the system’s combined output was 499hp and 680ft/lbs of torque to the rear wheels. To keep it’s lightweight yet high-storage lithium ion battery pack active for a long time under aggressive use, it used both regenerative braking while stopping and wind power from several small generator fans inside the engine bay while in motion. The gearbox was optimized to keep power to the ground on launch by increasing the first gear’s ratio and able to be ran only with the electric motors until 115mph, it will do 0-60 times in a still quick 5.0 seconds on only 1 of the 6 gears. It may not be supercar quick off the line, but once it passes 2nd gear you’ll feel the supercar performance rush in.
Only 3 modes were accessible: EV-Eco for efficient EV driving in the city, EV-Power for maximum use of only the EV Motor, and Combined for the full potential of the car. Taylor claims in this car’s combined configuration, the VGT would be able to achieve combined fuel economy ratings of 45mpg while still being able to achieve speeds of over 225mph. There was no signs given about this car becoming a reality even as a limited-production model, to most this is simply a one-off drivable concept car. However, technology used in the development might be used in future hybrid applications throughout the company’s lineup.