X is a Nomad without a clan, having exiled themselves long ago since they just don’t quite fit in with other people. Once a scavenger within a large family, they now roams the highways as an ‘independent contractor’ in search of riches in derelict buildings and cities left behind since collapse of the Old USA.

After several years (and even more repairs) as a trusty mate, X’s modified Thorton pickup truck is just about giving up the ghost. Having barely outmaneuvered a group Raffen Shiv bandits after the front differential grenaded itself, X figures it’s time to get something new before the issues completely overwhelm their repair skills. This means selling some ware and making a rare trip into Night City to visit a used car lot or two with a chip full of Euro-Dollars.

X has a few ideas for their next vehicle. Of course it has to look stylish. They can’t show up to any Nomad camp or covert corpo deal in the desert in some rag-tag shitbox. Considering the long rural travels, X will need something running on good ol’ CH000H2 fuel. Rugged, offroad capable, and dependable are a given, but so is some modicum of performance to keep some distance from any Raffen Shiv. The old Thorton pickup was not the most agile vehicle but it made up for it in working as a battering ram to clear through anything smaller and faster that got too close. The main advantage of it was the huge amounts of cargo space it offered, even if that meant using up more time and fuel during a scavenging run. The other possibility is to go with something smaller and faster that might need to make more trips for some jobs but will save time and fuel along the way. After these main considerations, X wants something comfortable as it will not only be used for long drives but also as an impromptu camper when travelling into areas that might need a quick exit at a moment’s notice.

All in all, X is looking for a used offroad-oriented vehicle of 2060 to 2070 model year, and it has to be something that can be used for scavenging runs, as well as something they can sleep in on the go (either reclining the front seat onto the back row or sleeping across a single bench seat). Full on overlanding vehicles aren’t important, X will modify stock rides for their uses. As long as it has power sent to all four wheels, enough interior and cargo space, and some modicum of ruggedness then it can be transformed into the ideal scavenging vehicle. 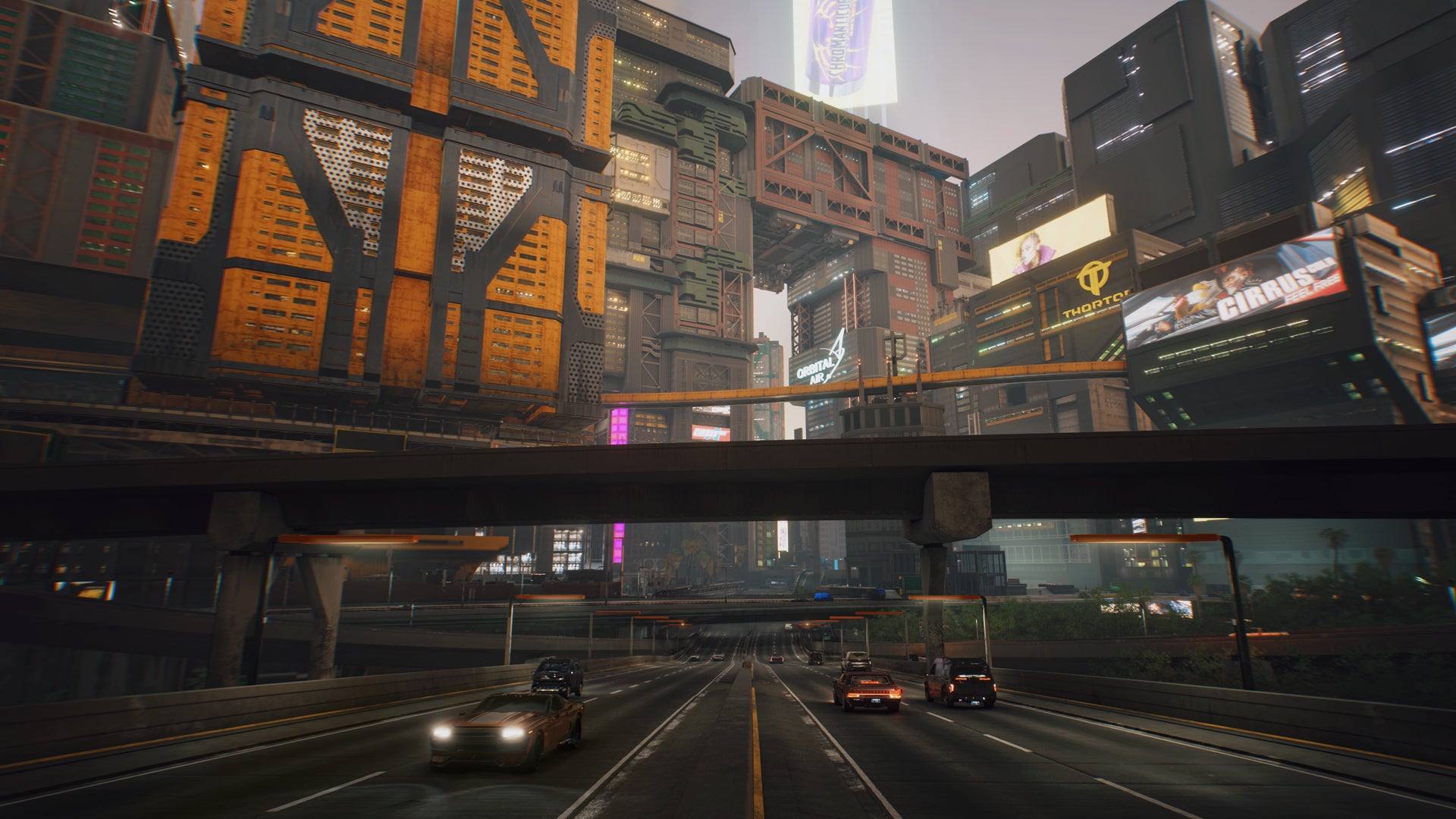 Now enjoy building and let me know if there’s any issues or clarification needed in the rules. Here’s some music for the ride. 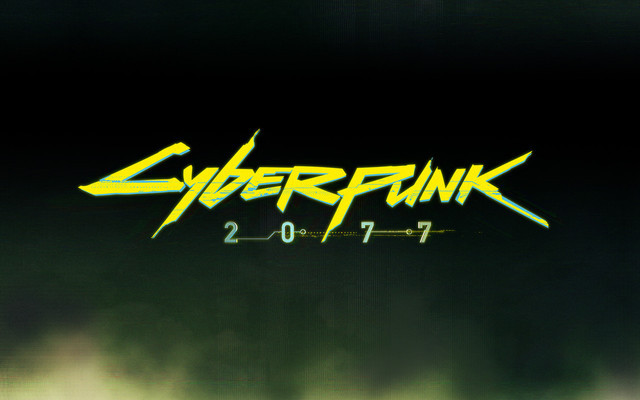 This round’s theme is basically “Cyberpunk Mad Max” - and it also reminds me somewhat of Rage 2 for some reason.

Anyway, will towing capacity be factored into the judging criteria along with load capacity and cargo volume?

Would the “Haynes Zombie Apocalypse Manual” be a good source of inspiration?

Could I suggest a slight revision in rules?

Mainly the offroad score.
At the moment, if you are producing something like the cyberpunk AMC Javelin in the third picture there, you will not get 25 offroad score from the factory. You would (imo) have to put solid axles on it, 4x4 and probably a little extra ride height. Bit weird, not exactly standard.

Cyberpunk has quite a few offroad style vehicles, and many of them aren’t truck / van type things.
From this site: http://www.igcd.net/game.php?id=1000013330 I found a few things that looked like the kind of thing X might make, but actually making the standard version achieve the ruleset would lead to weird engineering choices and thus, a bin.

For example, this is a Dodge Omni 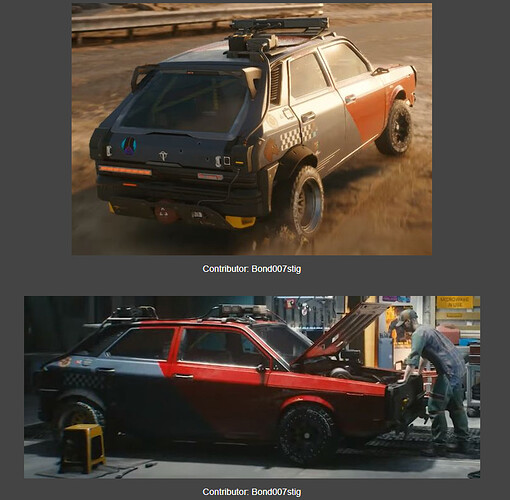 image805×789 179 KB
In the image it looks like it’s pretty good offroad, for small scavenging runs etc. Looking at the original car though it doesn’t look as if it would get over speedbumps, let alone achieve the required 25 offroad score. 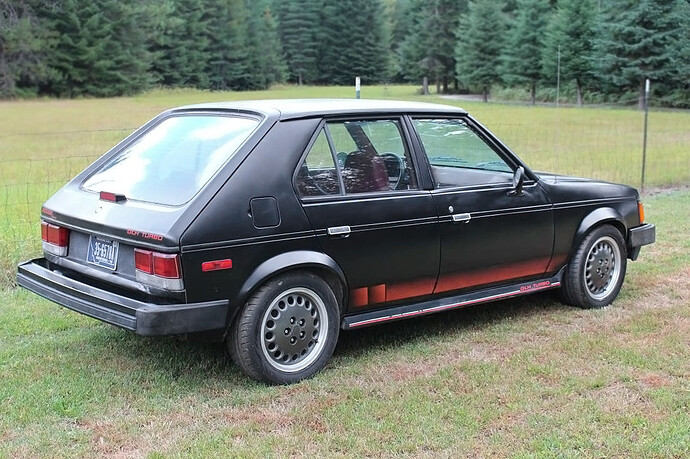 Another version of the Javelin from Cyberpunk 2077. 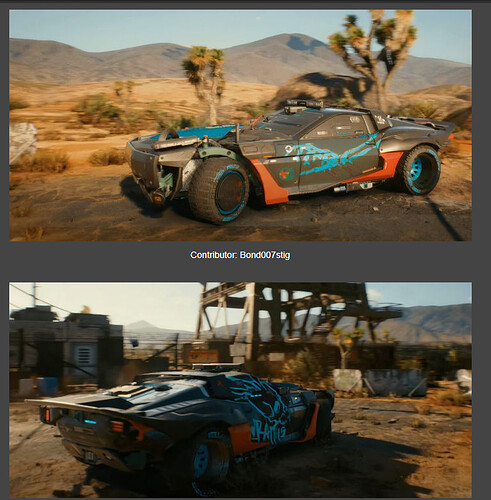 image766×779 180 KB
This would probably be what X would build out of the picture you posted, but the issue is the car if built in automation would not meet the ruleset.

So, what I’m saying is can we have a bit of a rule tweak to allow more coupe/sedan type bodies without having to make exscuses for why the muscle car has an offroad pack from factory. Someone was also saying about ET limits because it is 2077 and tech is slightly better but I don’t have a solid argument for that one.

Riffing off of what @Sky-High is saying… if this is 2077, and driving through the outlands is a semi-normal occurrence, who is really to say what “normal cars” would be by then? Cars have already been replaced by SUVs. Now SUVs are getting more car-like underpinnings. The trend could go towards fully off-road capable cars by then. Why don’t we just build something X doesn’t have to modify (within your guidelines, of course)? Just my opinion, though.

I’d have to check but I’m pretty sure that I have totally not off-road cars that get a similar score. Anyway, I don’t think those other cars would fit the rest of the requirements, so I can’t see this rule change making a whole lot of a difference.

@GassTiresandOil Umm, Cyberpunk is not Mad Max, they do have roads

PS Oh, Steph, no formatting ever works in the titles, tried that years ago

In all seriousness though, will surplus industrial or military vehicles be appropriate? Something like the GM ZR2 ISV/technical

@abg7 absolutely not Mad Max or Rage. X is buying factory a original car from a Night City used car lot. X will then use their skills to modify the car they purchase into something not far removed from Mad Max.

@Sky-High X is buying factory cars, not anything modified into a rally raid style. The reason I avoided posting images of the modified Nomad cars is that those are not what will be purchased, that will just be the result after X modifies them. To be clear, although the story specifies used cars, X wants original and unmodified used cars. AMC Eagle SX4 or Subaru XT would be the approaches to look at for a coupe, as those were AWD/4x4 from factory.

@mcp928 the last example image is a military style vehicle. I will be open to such things, but “no convertibles” also means “no open cab designs” and don’t try to sell it as an armoured vehicle either. X will add any necessary armour themselves.

Also to address some confusion from the Discord, the 2020 year for everything is just because that’s the latest tech. I don’t want cars that look like they came out of the current time as those will be long outdated by 2077. Look at the example photos provided for styling cues from the period of 2060-2070. There are more photos to be found at http://igcd.net/game.php?id=1000013330 but be sure to steer clear of modified cars as well as the newer sleek and curvy luxury vehicles. X isn’t made of money and is buying something 7-17 years old with a boxier shape

I’ll update the rules to make this clear, I don’t want to see things that have been modified into rally raid style Nomad vehicles already. X will pass those up since they only trust their own labour for modifications. Factory original cars only.

I’ve added a few styling examples not from Cyberpunk 2077 to the main post, should help anyone that’s been having some creativity issues. Just be aware that 70s and 80s concepts might have the right shapes but I still expect modern technology (like LEDs) so they look like they’re from a century in the future.

Prepare for a world of Cyberville screenshots.
I have a general idea, might try it next week and see how it goes. 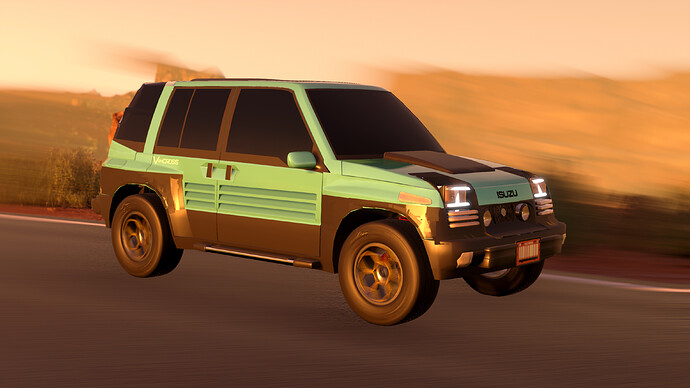 Fiat was busy being taken over by Ferrari and then engaging in a three way corporate war with PSA and Neo-British Leyland, in case you’re wondering.

LOL, ICA is one of the largest grocery store chains in Sweden, and honestly speaking, if they sold a car I guess that it would have looked like that one…

No convertibles or open cab designs

Hey, i have a Question.
What does it mean? No Pick up open flatbeds? Or what you mean by this?

I mean the cabin needs to be enclosed, so it must have doors and a roof. Basically trying to avoid this sort of thing: 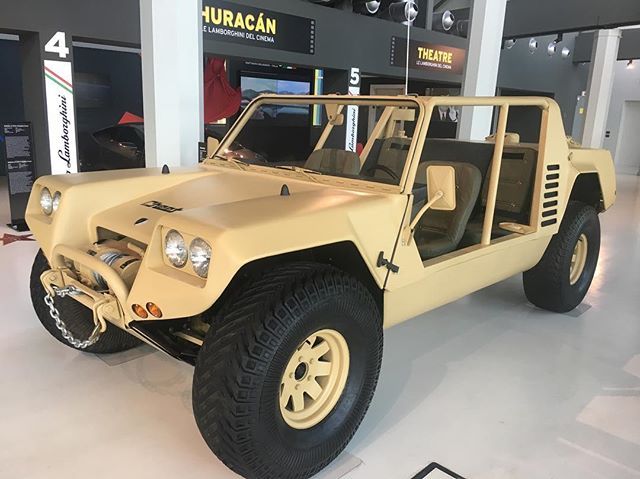 You can make a pickup but I would recommend you not cut away the whole bed, that’s the sort of thing X might decide to do themselves. 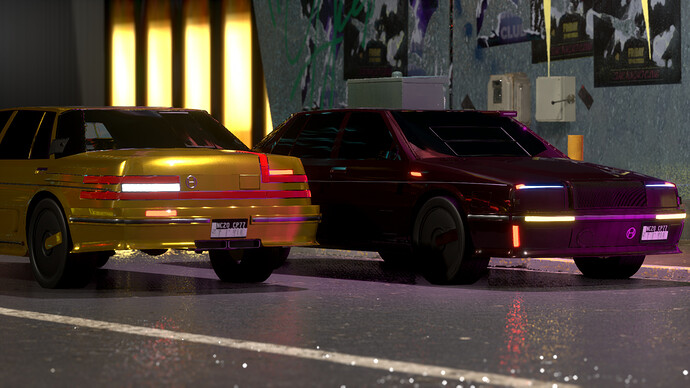 Just a little clarification (doesn’t matter much really), the listed price in the markets tab is what I go off as the used price, not as the original sale price. The economy is definitely much different than now so I figure up to E$45,000 for a 7-17 year old car should be fitting in 2077. 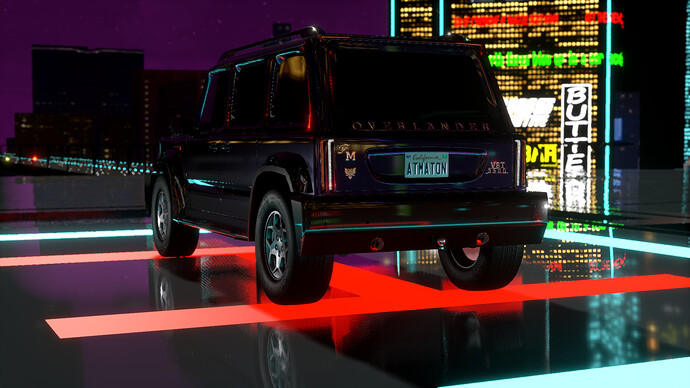 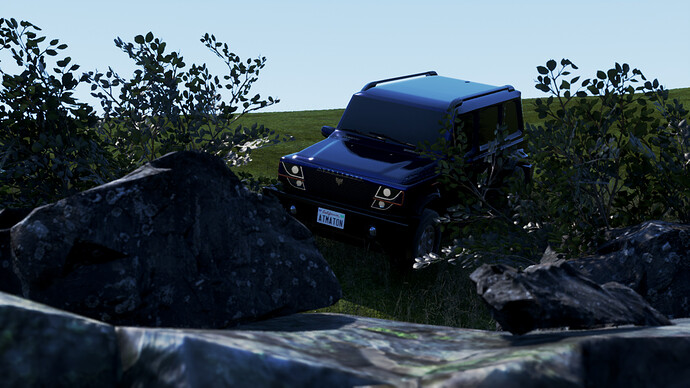 by the way, what about the transmission choice? is standard slushbox autos and manuals still usable, or only advanced auto, DCT, and sequential only??, or the other way round because its cyberpunk that DCT, advanced Auto, and sequential is not developed or something