The Fast and the Furious Challenge. Results! 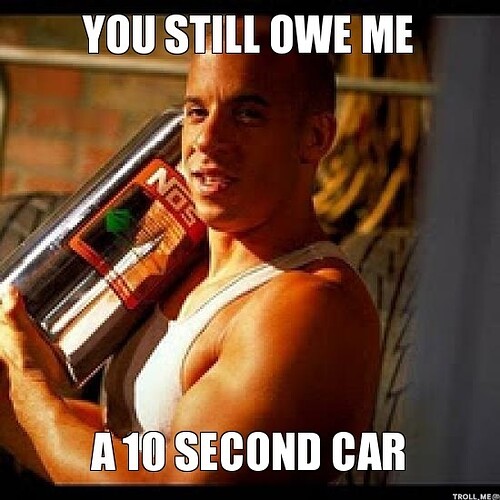 You heard the man, you blew up the car he won from you and now you’ve got to get him another, it’s gotta be fast and we’ll pretend you don’t have a FBI budget so it’s gotta be cheap too.

*[size=150]Scoring[/size]
Cheapest car gets 30 points, next gets 25…ect
[Important Note] production units will be counted at a rate of $19 per unit

The winner will be the one with the highest combined score. In the event of a tie, the faster time will be used as a tie breaker.

Deadline for this will be February the 23rd.

[size=150]Edit confidentiality clause, as I have assigned no set values for cost or time I expect these stats to remain secret until the deadline, anyone sharing times or costs will be penalized 1 point, not much but enough to break a tie. Repeat offenders will be shot by Vince. [/size]http://www.imfdb.org/images/thumb/d/db/Tfatf-moss3.jpg/600px-Tfatf-moss3.jpg

I’m open to suggestions on scoring changes, and any other questions or ideas.

1.“I live my life a quarter-mile at a time. Nothing else matters. Not the mortgage, not the store, not my team and all their bullshit. For those ten seconds or less, I’m free.” I know that, but Dom feels otherwise.
2.“No faith? Pop the hood.” I want to see all the crazy creations, from a spoon powered crx, to a big block 70’s 4 door, to a xj220 powered ford transit, whoa wait mixing up my references here but you get the idea.
3. http://i.ytimg.com/vi/ZJBpeCW2H_Y/hqdefault.jpg Can’t wait to see it.

This, will be awesome. Time to POWAAAAAAAA

Alright, time for a low-rider Eldorado with something funny going on underneath!

(Once I finish making it cheaper, that is.)

Nice racing strips, I can already feel their added power.

This, will be awesome. Time to POWAAAAAAAA

I think strop found his calling…lol

Yeah man, ever since I tried to play around with this thing called “tameness” and make “more balanced” cars for the track tournaments, I haven’t been doing as well as usual in the tournaments. It’s time to cut loose and return to form for a bit!

Thanks To Strop, the voice of reason, we have a new rule. 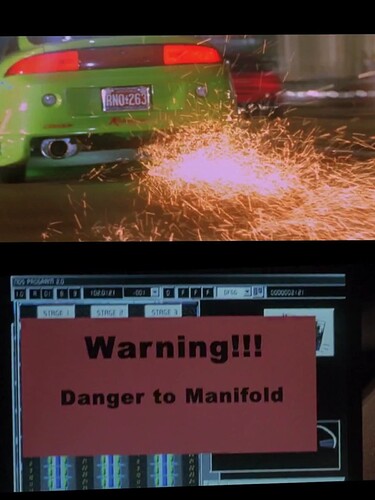 Yeah man, ever since I tried to play around with this thing called “tameness” and make “more balanced” cars for the track tournaments, I haven’t been doing as well as usual in the tournaments. It’s time to cut loose and return to form for a bit!

Tameness is for the feeble.

UGH WISH I KNEW HOW TO GET TRACTION

edit: I decided to take the lightweight approach

I am so trying to build a car for this.

PMC will build a 10 second car or die trying!

So here’s a little something i’m working on… I call it…Death.

The Shark-PMC GT Sedan Drag Deluxe is THE sleeper car.

PMC will build a 10 second car or die trying!

A 10 second Zoope would be awesome.

5 entries so far, I have not started tech inspections yet but for those that pass I will try and post a little outline with impressions about each car after the deadline.

We need more entries! MOAR POWAR! Come on guys, niall’s like the king of quarter mile, give the man some love!