The Game is too big

I played Automation a few months ago and made a lot of cars, and I unistalled the game, now that I want to reinstall the game it weighs 20GB I’d like to tell the game to download itself not my old cars…
I have it on Steam and thank you for your time and don’t forget the moto:
Liberté Égalité Xantia

To be fair, even with about 500+ cars and 400+ mods, the game is only about 22gb. Since it’s all just database stuff, rather than storing actual models of the car. 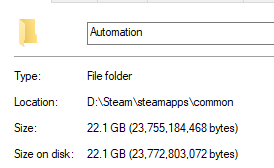 I don’t think 2gb is going to make much of a difference, if you were that close on your drive it would be pretty uh, the big bad.

Yes, there’s almost 1000 bodies currently in the game, as well as all the fixtures, the chassis, engines, design rooms, photo scenes, etc, not to mention all the coding for these things as well as the UI and whatever else. It’s actually pretty light compared to most recent games.

it says so on the steam page

). However there is no online backup, cloud sync or whatever keeping them safe in case of local file loss/damage, so it’s good to do that manually. And that means that the game will not download any old cars.

Correct, if you uninstall the game it won’t actually remove your savegames or sandbox database. So your cars and engines would still be there. Of course they might be incompatible by now.