Going to start a little series of articles this week which I will continue to run until the release of Automation and quite possibly longer. These cars will be cars you may want to design for yourself in game that are just brilliant, others that might look good but have tendency to be rather bad and then others still which are likely to break glass in all the shops on its way down the high street. Today we start with the good for the week. It took me a while to decide what should be the all important first car but I finally settled for the Lamborghini Miura. You may think this is strange for someone who was born in the early part of the 90s and therefore post-dates this car by about 26 years. However you can’t but marvel at the look of this car and I have somewhat of a love affair with Lamborghini, although sadly I shall probably never own one but we can dream. 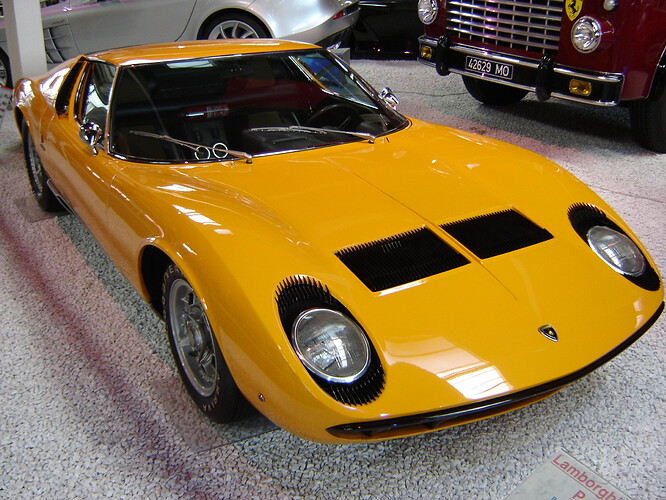 One interesting point about this car was that, in quite a few of the models, it appears to have eyelashes. This is not the only attempt at personifying a car but probably one of the coolest. Its a very pretty car this but then again in the 60s this was to be expected from the exotic world of supercar makers in an era that gave us the Ferrari Dino etc. Most people though consider the Miura the father of the supercar. The car that really set the ball rolling. Whether that is actually true is debatable but it was certainly a shaper. For a start it was the first road car to have a mid-engine layout. When it was launched it was the fastest production car in the world by some way. It had a wonderful V12 engine that created one of the iconic noises in supercar history and did I mention the way it looked? They also did a spider version which would have been immensely cool but I must admit in the case of the Miura I think its better with the roof on. You can tell its old too because when it was released it cost $20,000, which is about £13,000 on today’s exchange rates. You’d be struggling to buy a family saloon for that now. To be fair though with inflation in today’s money it cost $114,000 when it was released which is still fairly cheap for what it is. That works out at about £72,500. These days you pay that for an M5. Tell me which would you rather have. The brilliant but rather soulless BMW M5 or the Lamborghini Miura. The Miura oozes charisma and apart from that it started off one of the best ranges of supercars ever. They replaced it with the Countach then the Diablo, Murcielago and now Aventador. All of those cars are superb cars in their own right and all of them are as a result of the first one, the Adam, the Miura.

I’ll be back tomorrow to post the bad car for this week.