Due to life etc. I don’t post much these days. I don’t even read much. Hell, I still don’t know why someone made me a Discord mod when all i do on the official Discord server is shitpost and roast people when someone throws out the admin tag because I literally can’t remember how to warn, mute or ban (Discord’s most useless mod).

But what I have noticed is that there’s a discrepancy between the banhammer justice that gets meted out on Discord and on the forums, despite the two evolving to become pretty much a continuity. This is now appearing to create problems because let’s face it, some of y’all are real dense motherfuckers who do not know how to get along with other internet people. Is it because internet? Intellectually altered diagnoses? Huffing too much petrol fumes? I dunno, and I don’t think too many people care when the prevailing attitude is that interacting here and on Discord is too much of a PITA and it’s making many people quite cranky coming into “the festive season”. 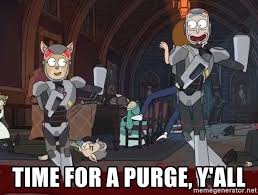 I would at the very least suggest if you get banned on the official Discord you should also be banned on the forum and vice-versa. What happens in 1) other Discord servers 2) other social media platforms like harrassing kid on Instagram even though they annoy you sooooooo much is beyond the jurisdiction of this community and therefore not our business, but where it comes to official community stuff, the balance between copping a couple of salty reviews on Steam versus people getting turned off because of a few douchebags seems pretty clear to me.

The other thing I’d suggest is offering the Discord mods (mods not helpers at this stage) community powers on the forum. At the moment the only one I see on the forum is Adam and there’s only so much that beautiful mop of action hair can take. But please for the love of God I’m not asking to be a forum mod. Hell take my mod title off me on Discord or something, can you just make my title something else like the Shitpost Party Men or something

Let’s give the gift of Christmas cheer to all the good folk here by yeeting all the bellends, what say you!

Anyways I’m only writing this because posting just the gif would probably have me lambasted off of the face of the forum, not saying that I want to have the mod privileges here but Adam definitely could use a bit of help poor action-hair wielding soul.

I think, for a lack of a better term, that people should also try to just be a little more conscious of what’s going on around them on the forums? It seems like a really small request, but- and I’m guilty of this, especially early on in my preteen/teen years strop can attest to this- when you’re on the receiving end of criticism it’s pretty difficult to say “sorry I’m wrong I apologize” or even just let things go. For quite a few people on here, though, it might be worth just taking a step back and asking yourself “is it worth it” more often. It’s definitely a skill I’ve had to learn over the years, as is for many people I’ve met

Eh, I was banned on the discord in October for being an idiot, but haven’t caused trouble on the forum in the nine years I’ve had an account over here, so idk if an automatic ban on both platforms is the right option for everybody.

You’re saying that because you were behaving antisocially on one platform and not the other despite both communities being the same, that you should be allowed access to the community via the other platform? That doesn’t really make sense: antisocial behaviour is that no matter what so people should really just think that their behaviour reflects them at any given time, not just when they’re logged in on one place and not the other.

if anything being aware of what’s really at stake should be an incentive to not being banned on either platform.

I’m saying that it should be done on a case by case basis.

But yeah I appreciate usage varies, but on the other hand a blanket rule (which may be applied at an admin’s discretion, perhaps this is the key) would probably be more practical to interpret for starters.