The grip in BeamNG (Rant-ish)

I want to address my biggest gripe with BeamNG. No matter what you do in Automation your BeamNG car will usually perform worse in a straight line which is something that doesn’t bother me anymore since it’s not as big of an issue as the understeering off the road at regular road speeds.

This low grip also means that the wheelspin you think you tuned out in Automation is usually there in spades ready to screw you over. I’ve tried the game both with my wheel and my controller and it’s always as bad. It’s not normal for a light-ish car with decent handling and with regular 205/15 tyres to have them squeal like a pig when you try to take a regular road turn at regular speeds (Even more unusual when you actually have a grippy car in Automation and it still behaves like this).

I understand that this is most likely less of an Automation issue and more of a BeamNG issue but it really irks me and it seems like no one else has this issue. 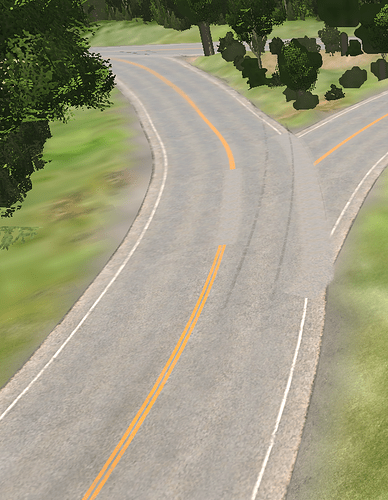 This is the result of me setting the cruise control to 35-ish MPH and attempting to just drive normally (Ignore the potato settings).

can you please post the corresponding .car file for reference?
there may be something going wrong with how the car is set up

i do agree with the top speed issue, but most cars i make corner the way i expect them to according to the graphs

The car works fine it’s just that grip is underwhelming when the car gets exported, the rest of the handling behaves like I expect it to.

if you are talking longitudinal grip (acceleration and braking), i agree

for lateral grip (turning) i see no problem really

From my understanding the way in which beam calculates wheelspin/grip is also very different from automation and therefore figures aren’t 100% transferable.

Beam calculates wheelspin and wheel slippage based off of 3 main values:

Each type of surface within a map (to a point) has unique values for each of these and they can be map specific (most if not all default Beam maps use default values).

From what I have played with and speaking to people who know way more about this area than I do the modelling isn’t hugely inaccurate in Beam, it might be a little on the low friction side (which gives the under steer effect) but this can easily be overcome with a change in driving style as Beam also cares about weight transfer which other driving games don’t always as much.

I agree with this, it’s effectively a T-junction coming on to an A road, it’s a corner I’d expect IRL to have chevrons and a limit no higher than 40, but probably 30.

You didn’t mention probably the single biggest property of the tyres most likely to affect it given Beam’s modelling: the tyre profile. Also mentioning the year and the grade of tyre (which corresponds to grip coefficient) would be helpful.

This said, I generally agree that at low speeds, the overall grip for tyres can be a touch on the low side and the handling is sometimes “lumpy” because the body shakes more than it should or the tyres have less beams than it could. That’s what it ultimately boils down to: in normal deformation conditions the contact patch doesn’t really seem to be as high as it could be, which I tend to compensate for by simply upgrading the tyre slightly if it really needs it.

beamng exported car suffer from weak joints where the tires are attached, so that under any kind of loading (high speed bump, heavy cornering, lot of power being applied by brakes or engines) the wheel join bends and that carefully constructed suspension geometry and weight balance from automation gets thrown out of the window.

that said if you tune a car for sportiness it indeed does lose up the rear in corner, so not everything drives like a understeery brick and some cars do can get very lively - which makes me think there’s something else in the setup that’s causing the issue.

@LoSboccacc That is an interesting point, but wouldn’t the deformation have the same strength effect at lower speeds where you get as high cornering Gs? For all but the most extreme cars there is not much load difference between low speed cornering at the limit and the same thing at high speeds.

it doesn’t happen necessarily with the same strength because the physic tick covers a larger distance at higher speed, resulting in larger punctual forces.

(note in second half of the video, where the rim is visible, the whole rim is moving, it’s not just the tire deforming and regaining grip)