Who doesn’t know the Nürburgring Nordschleife… First off, i should state that I am a very big fan of this track. I really like ‘The Green Hell’ because it is very difficult to drive on it perfectly. I’ve been to the track only once in my life and it was amazing. The circuit offers, at least to me, pure perfection on how a circuit should be and with the conditions being able to vary from one part to another, it can be a real test.

Map of the complete track, including the Grand Prix circuit

Crashes and Deaths
One of the most difficult corners, is the Adenauer Frost. You enter at high speed but have to slow down significantly and at the right time, or else you either slow down too much, with high speed traffic coming from behind, or you totally overshoot the upcoming chicane and if you’re lucky enough, not totally crash or flip your car.

I found this video of Adenauer Forst in 1970, with the cars of that era driving (and crashing!) or being lucky enough to maneuvre the car back on track without any (visible) damage.
The current deathtoll of the Nürburgring during it’s 87 years in business, totals at 73 deaths. Though, rumors say at least 2 to 12 people A YEAR die at the track.
Maybe this video proves a bit why those rumors exist:

Will update this post with awesome material other people post or I find myself, so please check back regularly!!

Nice to see another Dutch Nürburgring Admirer. I’ve been there two times, driving my relatively slow Hyundai Accent (bridge to gantry: 11:40). But even driving a slower car makes you addicted, I will probably go at least two times this year (depending on the amount of money i can spend). For petrolheads the Green Hell is some kind of Mekka, you have to visit it at least once.

Nice. Well I drive a Saxo 1.1i and I havent been there with my car yet. Im getting a Lancer Evo IV anytime soon. When I get some new brakes, tires, and such on there, I’m thinking of going to do some laps there. First practicing hard on the computer, then some slower laps while driving and eventually set a good time.

I look a bit angry on the picture, but it really is one of the best experiences ever.

Angry? I only see the face of concentration!

I wish I could go to the Ring, but… it’s too expensive and time consuming for me to even try (passports, plane tickets… etc)! Oh well, just one to dream about.

Like OCAdam I can only dream of coming here, though maybe it’ll happen one day!

For the time being I can only live the fantasy through various racing simulators. What I’ve found is that I always end up cutting Adenauer-Forst and running wide past the apex because it’s over the crest and I can never quite pick where it actually is. I’ve never overshot it, because with the cars I run, I swing into Fuchsröhre at anywhere between 300-340km/h (these cars invariably have >1000hp) and then immediately have to get on the brakes as soon as I’ve hit the bottom otherwise the car might go airborne around the following left handed crest and then I die in a blazing ball of fire. Therefore when I finally get around to approaching Adenauer-Forst, it always feels a lot slower and I always turn in too early!

Everything past Karussell to the home stretch I’m still rubbish at. Does Schwalbenschwanz really have negative camber? It sure doesn’t look that way in real life…

Does Schwalbenschwanz really have negative camber? It sure doesn’t look that way in real life…

I think it actually does, yes.

Another race has been held at the Nordschleife, coming along with some pretty nice pictures! 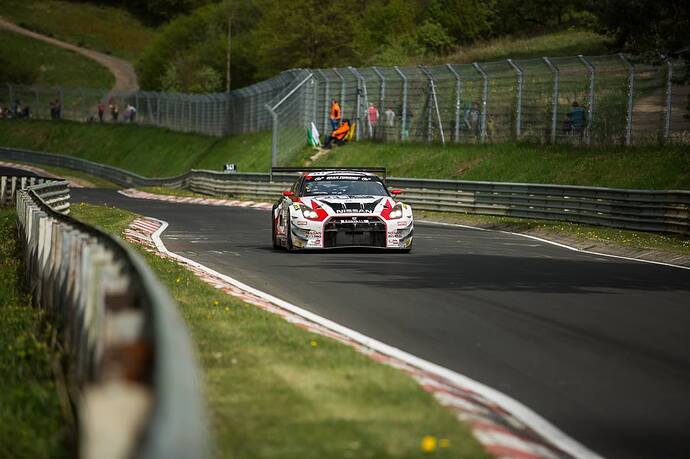 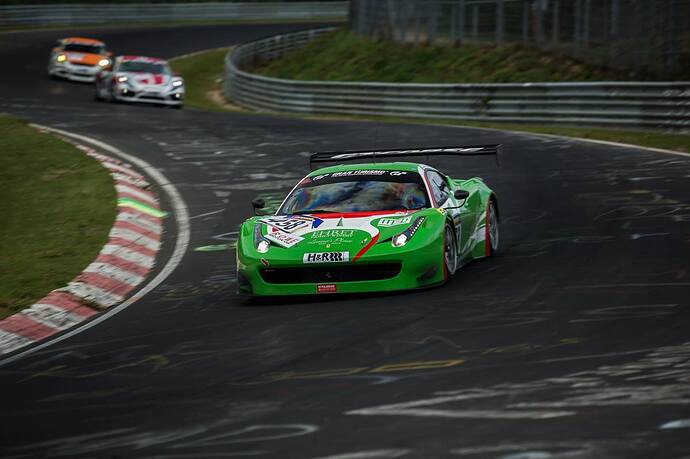 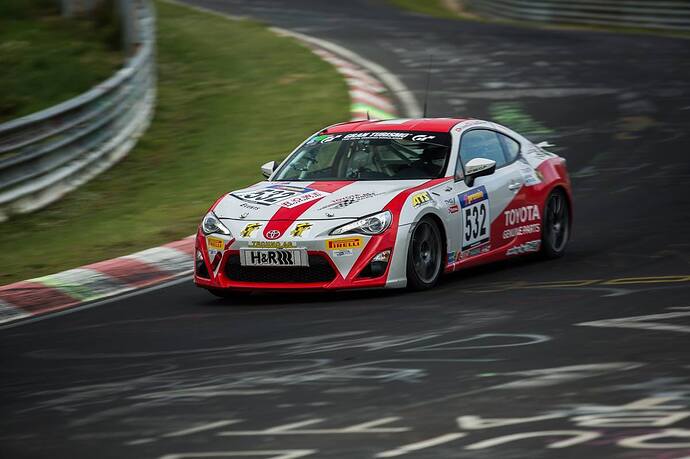 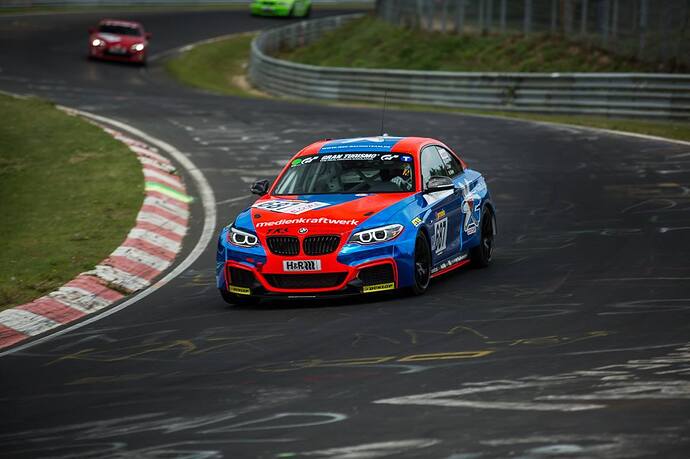 This comment strikes me as funny because it’s highly flattering to the makers of GT that you’d be comparing this way, instead of the other way around

It’s really interesting to see an 86 in the same race as a GTR and 458! Were they all in the same class?

No, they race in different classes but at the same time. It’s an endurance race.

gives them a slight surreal touch because our eyes never see it that way. Also, on consoles you usually have a narrow field of view (just like these pics). So the comparison to a game is actually a good one considering the techniques and equipment used.

Oh I see what you mean! I always wondered what the difference is and only noticed the field of view issue (FPS with FOV of 90 degrees nowadays gives me motion sickness and I have to increase it).

There are a heap of videos of people getting it wrong, but here’s a rather different video of some crazy dude pretty much drifting his way around a very wet Nordschleife in a 328i (helps that he worked there). Powersliiiiiiiiiiiiiiiiiide.

gives them a slight surreal touch because our eyes never see it that way. Also, on consoles you usually have a narrow field of view (just like these pics). So the comparison to a game is actually a good one considering the techniques and equipment used.

Mr. Cameraman! Haha! Thanks for adding that info! Clears it up just that extra bit.

Quiz question: What corner is this

Steilstreckenkurve (the one before Karussell).

You are expelled from any further N"urburgring quizes, [size=45]you bloody german[/size] haha! You know it all!

The big sign in the background revealed it. At most of the other places on the ring it is more difficult.

A wonderful old photograph of the famous Mercedes 190E 2.3-16 racing on the Nürburgring! 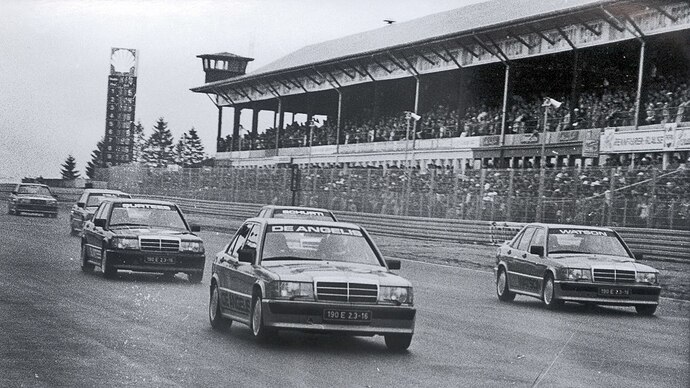