@squidhead @strop and I are pleased to announce the imminent release of The Racing Line Magazine’s first issue. 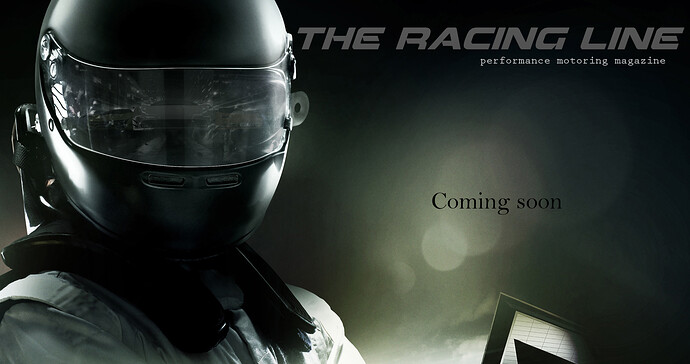 Here it is! In PDF form, our little project we’ve been working for over a month now. Well in that month is many weeks of inactivity and other commitments but we’ve got it done anyway!

Here is the PDF: https://drive.google.com/open?id=0B-6B6jrbHy0RZ1RKUGV5Y2FPR0E

Credit goes to @squidhead for Images and photoshop work and @strop for editing and proofreading!

All comments are appreciated!

Oh wow, it looks so good when put all together.

Let me be the first to say my input into this was minimal. It was 1 car, and a few writing suggestions here and there. Deskyx and squidhead put in about 99% of the work. I was supposed to draw a picture but I never got around to it due to time constraints.

So really, I feel all the credit should go to the other two. Massive props!

Ok, yeah, the finished product does look awesome. I got to only read the initial doc document and this looks proper! GJ guys

Bloody hell, that is some crazy good photoshopping.

So clean, so tidy, the entire magazine reads well, is laid out logically… why are you even reading this? Do you expect me to complain?

Aaaah, error, error! Hypera is Norwegian, not Polish (unlike me

I’d like to add one thing regarding minuses of Niddhogg in the summary - as tested example was pre-production one it had manual transmission instead of a DCT, as we at Hypera weren’t sure if our deal for DCTs will work until the last moment. Production run has a DCT. And economy can always be improved by switching to Eco mode with “only” 620hp

And yay, Hypera is faster than KHT!

Last thing - how can anyone be not a fan of crossplane V8 sound?

Hypera is faster than KHT!

And in quarter mile. And AFAIK in at least one more place…

Shhh… Let me be happy

Shhh… Let me be happy

All of us with manuals could switch to DCTs and do sub 25 times.

But fuck that shit m8

Now now no fighting, fighting’s reserved for when I open up entries to a performance compacts shoot out. Ooops Spoilers

The only sequential KHT has access to is the JSC unit from the Mistral 400RS, and that’s only rated to about 450hp; Also available is a single clutch sequential from the Sepang, but that thing is pretty much from the AMWEC class racer, so the pricetag is worth another supercar on top of that and it isn’t worth the hassle.

Heh, the RS-TRX is a track monster through and through.

Also the roll cage was a 20k extra, and an afterthought.

And that’s where GG went probably the most nuts: back in 2012 when the Mephisto was conceived and they were looking for parts, there wasn’t an existing DCT rated to 2000Nm. The closest was the Veyron’s DCT, made by Ricardo, rated for 1250Nm. So they put out a tender for consultation, and the resulting unit is the base from which they’ve been going ever since.

…it does have some NVH issues

In general, Mercury is far from GG’s “fastest” car around a track, and its barely fastest track time is mostly to do with ridiculous straight line speed and the huge balls the driver had (irrespective of the driver’s sex

Those sports tires really killed it at first man, don’t you think semi slicks would work better even for regular applications?

Yeah, but I wanted to supply tyres for all-weather applications.

Not that you’d probably even dare take Mercury in all weather, come to think of it. This has been the subject of ongoing internal struggle for years. Probably with future top of the line cars we won’t bother to compromise.

Why don’t I declare a winner? Because the point of the magazine is to see how people go fast with different ways. Not a single car here is the same. The Entropy relies on suspension setting and aero dynamics. The Hypera uses all wheel drive for acceleration. The Cadence relies on being horribly unsafe and light. The Boqliq has near 2000 HP. The Eau Rouge has an obsession down to using 200mm brakes just to save weight. The Gryphon has an unbeatable power to weight ratio. How do I declare a winner? By going for the outright fastest? Fastest where? Niddhogg may win on MRLS but it turns out slower on the Nur due to AWD parasitic loss, opposite case with the Dimension, aero really isn’t an advantage on slower course like Laguna but absolutely important on the Nur. Do I declare a winner based on which car does everything the best? That would pretty much set either the Boqliq or Dimension to win because we’re judging cars on things that they were built with zero concern for. Docking points because the Eau Rouge for example doesn’t come with a 20 speaker stereo system is stupid.

And besides, I’m sure all of these cars are built as “the” ideal hypercar for each one of the users who sent them in. I know mine is.

Also in defense of each of the cars:

Entropy: This car is seriously let down by it’s 7 speed and would’ve shaved half a second more if I switched to a 6, but I kept it in because it makes sense with my company’s lore. We switched to 7 speed manuals for all but AWD applications. And it also has the 2nd worst power to weight ratio of them all, the slowest acceleration and top speed figures but it is the 2nd quickest on the Nurburgring when tested, only behind the GG Mercury, and that was with the Mercury fitted with non OEM slicks.

Niddhogg: I give it alot of shit for being uncivilized and getting only 7 mpg on track mode, but getting 1100 hp from a 4.4 liter V8 is no easy task. And this was a pre-production prototype when @szafirowy01 thought more sportiness would translate to better lap times, hence the manual transmission, 22 inch wheels, incredibly stiff suspension, and pretty much square tires. With all that mind, the car is still very impressive how quick it is, since it has a small contact patch, a much slower shifting transmission, and zero suspension travel all will hurt its time. I have all reason to believe the upcoming car to be displayed on the Paris motorshow will be a significant improvement.

It seems like the whole car was built in just 30 minutes, with pretty much no styling and that matte paint gave @squidhead aloooot of trouble in photoshop. WITH THAT SAID, how fast it is for a car with pretty much no quality sliders on anything except transmission, bottom end and tires, is simply amazing. This car is still a whole lot quicker than most Automation supercars with zero setting and almost 100 kg of lift up front and is just right behind our cars most of the time.

Eau Rouge: It has the 2nd lowest HP output in the comparison, only 50 kg of downforce on the rear, and gets 35 drivability, and can still do 6:40 flat on the nur even with a manual and with aloooooooooot of punches pulled. You wanna see their real effort, dig up the Diabolica. Now that does 6:31.

Mercury: From my review it may give the vibe that the Mercury is a poor handling vehicle. This is not the case at all. The design brief of the Mercury is to go 330 mph not to go fast on the track. That pretty much means it can’t use racing aero, and Gryphon has taken many many measures to ensure that the car isn’t remains easy to handle and usable everyday. Which with 1300+ hp, is no easy task.

I hope this clears things up abit.

Great work on the magazine and beautiful photoshop work. Although I’m not sure Maesima really got the right audience advertising the Prova here