The Search for a Sportscar - The Agile and the Angry

This is a two-part challenge, but the second part only being unveiled once the first part is closed. Part I is kept vague and when entries are closed, the detailed Part II will be unveiled.

Part I: Looking for sporty cars

The year is 2001 and I’m looking for some production cars with sporty aspirations built between 1961 and 2001, whether they be lights sports cars, muscle cars, sports sedans, you name it. These are cars that will be tuned in Part II, so don’t send something already tuned to its maximum potential. There’s no advantage to making something brand new, so don’t worry about that for now, I just want some good variety here. I will not be looking at the stats for these cars, so that’s nothing to worry yourself on, I just want a nice variety of realistic sporty cars that you will then be modifying in Part II. Part II is where stats will matter.

This is an opportunity to showcase a sporty brand image for your lore companies, even if you don’t have much lore. While this challenge is set in the United States cars do not have to be models sold on that market, but be aware of the performance expectations of Americans.

These are the hard numbers that will apply for Part II as well, so keep that in mind when making your car for Part I. I will say that with what I have planned, you may be able to get something with lower numbers but don’t count on it. It’s safer for you to not try and reach the limits.

Part I submission deadline is Saturday September 1st at 23:59 GMT

Send me the .car file by PM before the deadline. No points for showcasing your car in the thread, but I’ll appreciate it.

Let me know if there’s anything that doesn’t make any sense. I know it’s vague but that’s because I want Part II to be a surprise.

A challenge about sports cars you say? Let me just get my best…

This isn't my best, but the only one that fit the ET/PU limits. Sometimes I regret having a company that uses exclusively spaceframes until 2000... 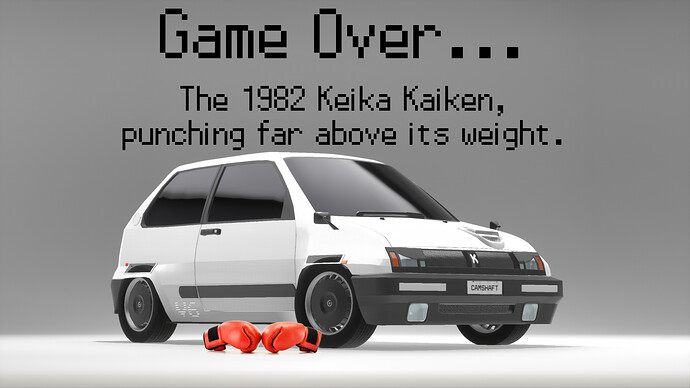 An advert for the 1982 Keika Kaiken on release in the UK.

The 1982 Keika Kaiken. What should’ve been a small and sensible hatchback, turned into a monster thanks to a 2L V6. Nothing about this car is sensible, logical, or even slightly sane. Underneath it’s basically an MR sports car in reverse, taking as many components from the Keika parts bin as possible to save costs, but also to give it a connection to the bigger, mid engine track monster that is the Keika Katana. 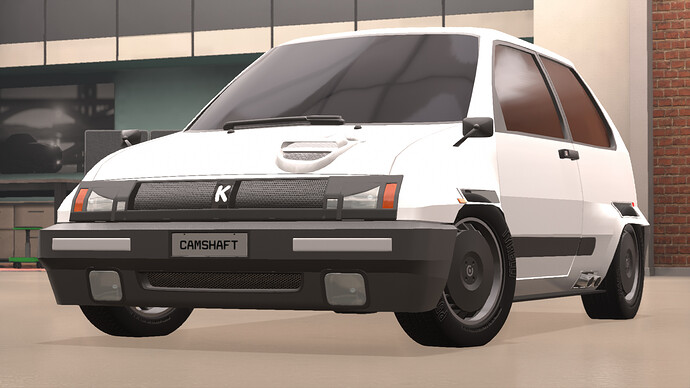 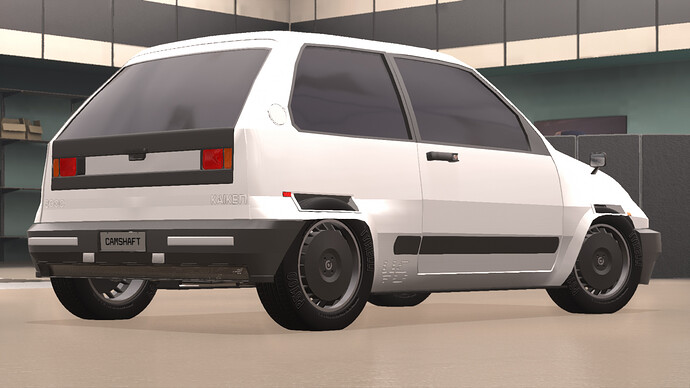 Also lore post: Keika is up for sale - #13 by BoostandEthanol

No contest is complete without a last place finisher. 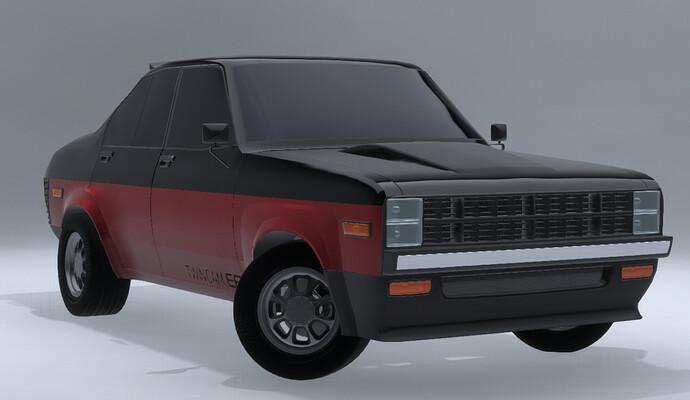 So far this game does not actually have an option for fully active dampers. However, I believe you referred to adaptive and semi-active dampers. As for anti-roll bar types, are we allowed to use semi-active sway bars in this challenge, or are we not?

This is a very curious challenge for sure. It’s also an opportunity for showcasing a design that hasn’t seen much use outside of my company thread… 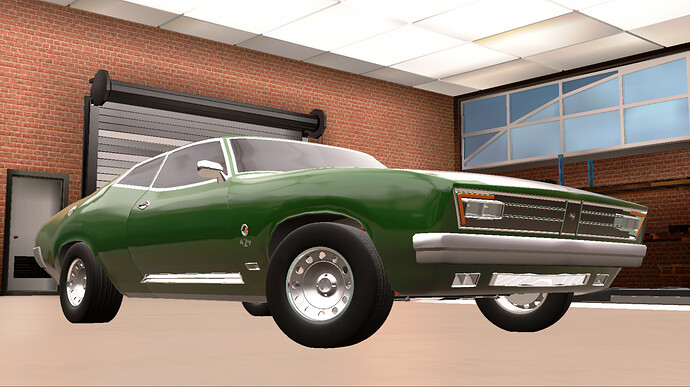 The Rioter Mk.2 Lion. Top of the line of the second-generation Mark 2 line, this is slightly more refined than your usual muscle car (in the sense that it doesn’t use solid axles, surprisingly enough). The badge on the side tells you part of the story. A large heart, and larger array of grumbling noises.
This is a late model, so it has received some design tweaks. Plus, it is a version made for more restrictive markets, so it’s running on 92 RON as opposed to 98…

@abg7 that was meant to say ‘adaptive dampers’ and it’s been edited as such. Any suspension part with ‘active’ used anywhere in the name is not allowed.

I’ve unfortunately ran into an issue with my dedicated graphics card yesterday and it seems to have unexpectedly bit the dust. I’ll see what I can do, but worst case I’ll have to delay Part II until I can get things resolved, however long that may take. 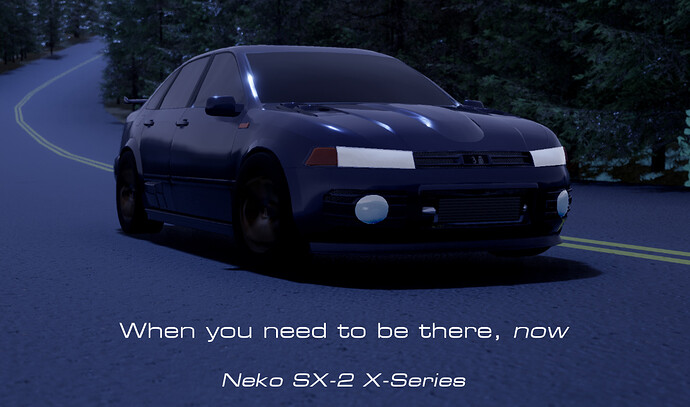 does that mean sport seats are a no go?

Exactly. Sport interior is a very high end thing, so it’s outside the scope of this competition.

@thecarlover - Will Part 2 include bringing car trims up to a certain year, or sportifying the original car to the same trim year?

I have 2 1974 HiWays, 1300e and GR2000, already in my sandbox but the answer to the questions above would determine which car I submit. Hope this makes sense…rewritten it 3 times!

And FYI, English is my only language!

If I make a 4-door version (able to seat up to 5) of L5’s not-a-Koenigsegg body, would that be elligable for this challenge?

Also, I’m updating the rules to ban the current Koenigsegg body from the competition as it’s little more than an engine sled (no passenger space or anything). 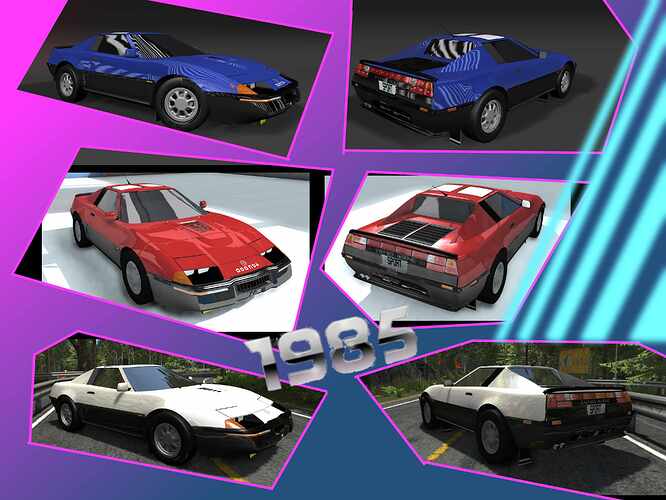 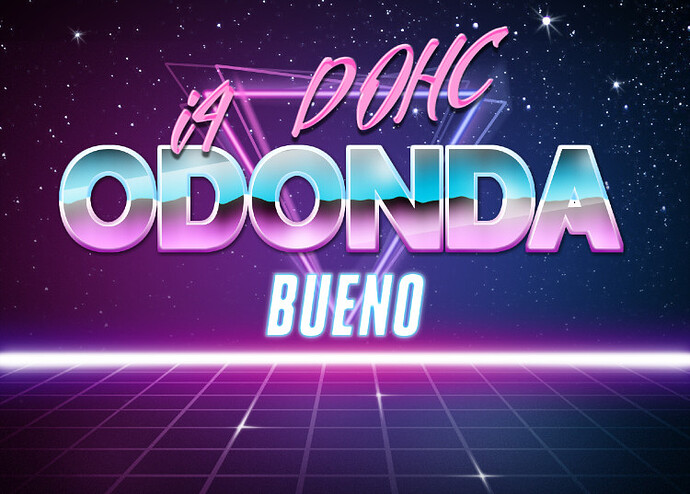 Forgot to reply to this one. I’ve already planned and tested Part II in a way to equalise cars from any era, so submit whichever you prefer. 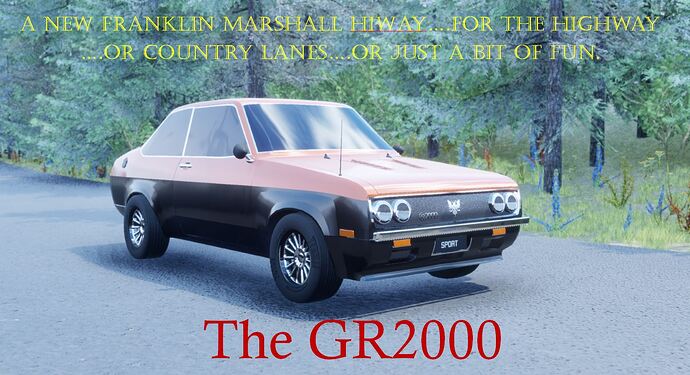 Um, the lore doesn’t count, because I literally posted it just now so it technically isn’t lore XD.
This is the Freedom Venus. It’s pretty sporty, uh. 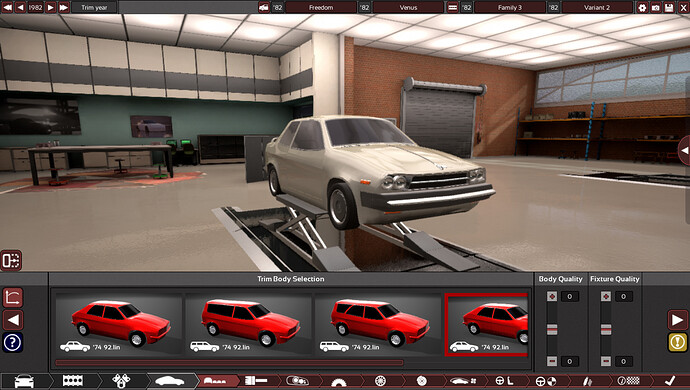 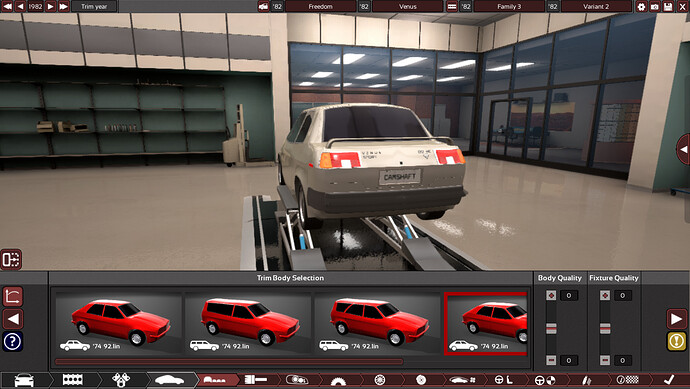 Basically I saw that there was a sports car challenge, and so I made this car for it. But I kind of made it with this sort of Diamond-Star Motors sort of rebadging theme. This is also meant to test how this new forum works, because I haven’t used it since the old one. XD [HighresScreenshot00004] This is a 1982 Freedom Venus, but in Japan (or Automation’s Japan equivilant), it’s known as a Motorpress Cuddly. The Trim variant seen here is a budget lights sports car, but was sold in Gasmea as a C… 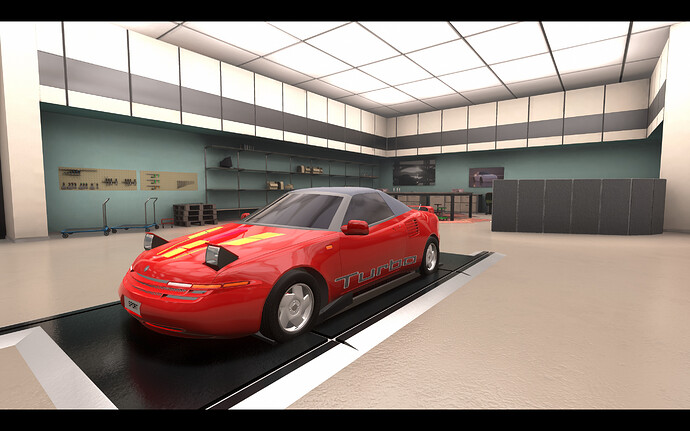 (Stats are almost identical to the AW11 MR2, except with a turbo power curve instead of supercharged)

MV Design will be entering this competition with a project developed for a fellow asian company. Presenting the 1989 Annis Elegy GT. A versatile and great handling sports coupe powered by the legendary MV26DET engine, pumping 276hp though all the wheels.And all that greatness for less than 20k! 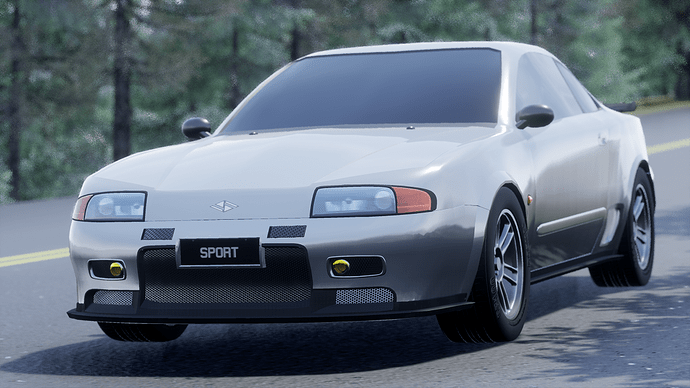 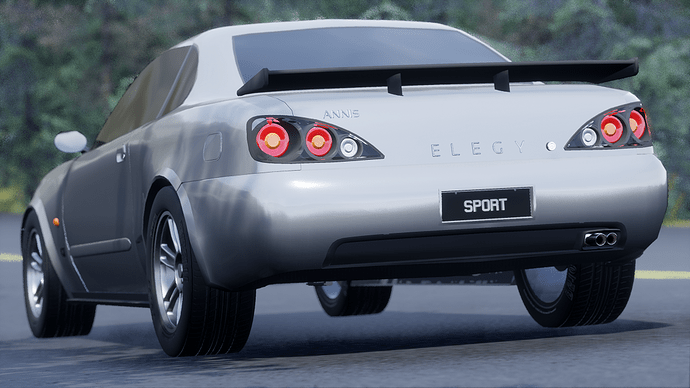 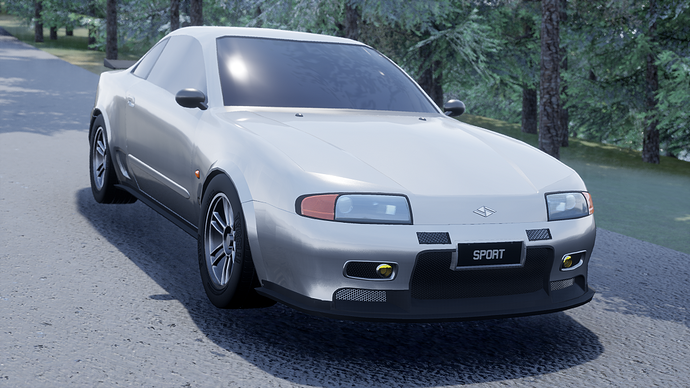 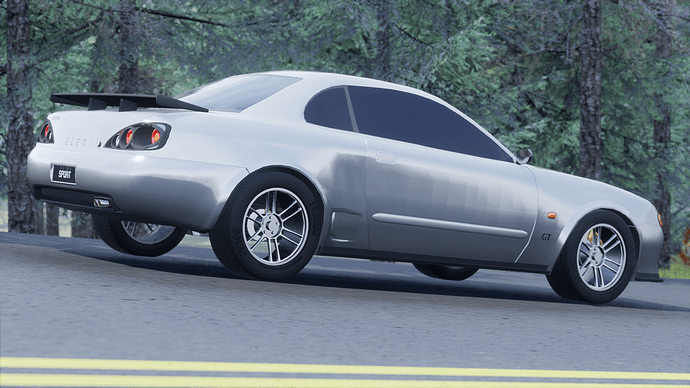 This is suposed to be a generation between GTA SA’s Elegy and GTA V’s Classic Elegy. 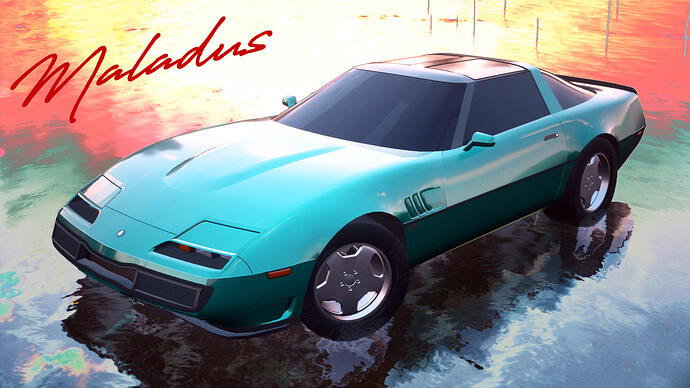