Today I tried to create ultra mega super car. And, unsurprisingly, I did. But I made it so powerful that I couldn’t achieve my estimated top speed. Not because of the car, but because of the transmission that is locked up to 490 km/h. I know that car that goes more than 530 km/h sounds really dumb (well because of physics), but when there is possibility to create a car that has ~2000 bhp then why it is impossible to get the car to its’ top speed(even if it is more than 600 km/h)? Hope that new update (the one that will make our cars less fuel efficient -_-) will bring that too

There is no lock of any sort, apart form the 12000 RPM limit! Gearing is limited, so if you use a low-revving engine, you speed-limit yourself. It is entirely possible to build cars that go faster than 550 km/h or even 600 km/h in Automation. Also consider that you’ll need some downforce to offset the huge amounts of lift at those speeds! If you have 100 kg of lift at 200 km/h, you have 400 kg of lift at 400 km/h.

Yeah, I know about the physics, I study automotive engineering. But I try to push the button that should add more speed on transmission but I can’t go more than 490 km/h on several engines.

As I discovered when killrob explained to me last month when I asked a similar question, the maximum gearing is dictated by max engine rpm. I think we’ve also explored the question of more sophisticated gear ratio tuning, but that’d clutter up the ui for limited functional gain given the scope of the game.

Do you mean the Top Speed slider, which goes to 905 km/h in this example? 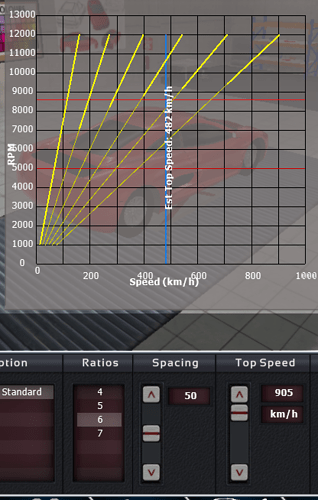 Nitromethane, methanol, nitrous oxide, supercharger beeing fed by a pair of turbos, max boost in exess of 8 bar… then maybe…

The problem is the game only goes to that speed with very high revving cars, and the only way to make the engines rev that high is to reduce their power considerably. While this isn’t very important in the tycoon aspect of the game I know there are plenty of people like me who will go “lets make the fastest thing ever” and be disappointed and frustrated when the gearbox just wont let them due to a UI limitation. This will probably be an even bigger problem once V12s, V16s and especially W16s are added to the game since they will be able to generate considerably more power than the current V8s.

I’m not sure what the UI solution would be to get a densely populated range of top speed options from 50mph to about 600mph, but it is certainly something worth thinking about during the final polishing stages.

Ps. I’ve had a quick go at increasing the top speed of the gearbox via editing the save file in the previous build but failed miserably, so if any devs have any tips for that i would be interested in trying them out

While I’m very much in the “fastest thing ever” camp, and would love an option to adjust final drive ratio in the UI, the reason I haven’t actually advocated for such is that realistically speaking, actually driveable cars (and I stretch this term to the utter limits of its definition) don’t actually exceed the current gearing/rpm limited top speed by much if anything, mainly due to cooling requirements of engines that put out the HP required to break even 300mph. I have a perfectly serviceable example (engine reliability over 30) of a car that, with everything in it and acceptable aerodynamic profile, does 530kmh, which also coincides with the maximum gearing of about 570, and given the scope and focus of Automation, I’m satisfied with that.

I would agree with strop that this is more than enough for “usable cars”. One thing easy to forget here is that opening up the slider range towards higher values will make the slider less accurate for lower values, which means that common cars will be more difficult to set. Yes that could be solved in a different way - is this worth the trouble right now? I am inclined to say no.

Reaching top speed is actually very easy, look at my Signature. Just takes time and patience. I just made a car with a theoretical top speed of 562 MPH / 904 KPH. It’s not hard. I mean sure, I’ve killed several of my test drivers and payed like… a fuck ton in life insurance premiums, but hey. That’s the cost of progress.