Hi, I have created three different cars with Turbo on Automation all of them different and after I export them to BeamNG all of them say that the turbo is overheating after like 5/10s full throttle without pushing the limits, can anyone help me in the game (Automation) says everything is fine but on BeamNG that doesn’t happen.

I’ve heard this also happens when the turbo airflow in Automation is in the red (like 78% or less) for either the compressor or turbine. 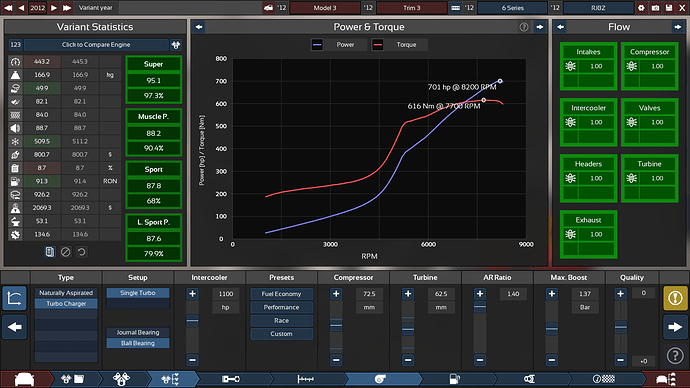 Do all the engines have peak hp at the redline? It may be related to that
(Also best practice is to generally have redline 400-600rpm after peak hp)

Addem: also make sure you are not cutting down on cooling airflow in the aero tab of automation. Anything lower than 50 on the slider is basically for restricting air flow to gain top speed (which most cars should never be set lower than 50)

Still the same, the turbo produces more boost at higher RPMs now, before would hit certain speed and the boost would go down, but the turbo still overheats and the Cooling Airflow is at 66 before it was at 60 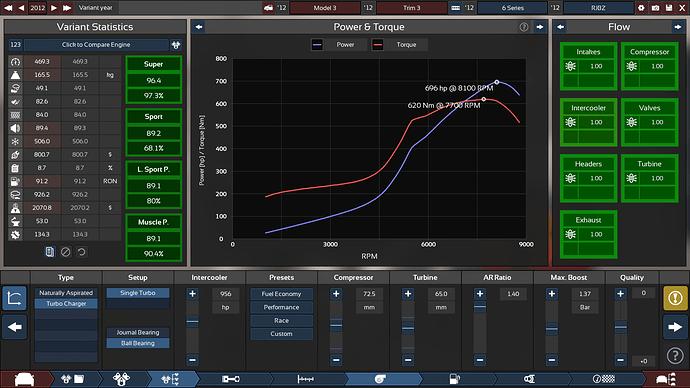 Change JUST the quality, nothing else.

Nope, nothing the turbo still overheats I watch other people make stupid cars with turbos and I try to make something good It always overheats…

What is your AFR?

IRL the turbos can be melted if the exhausts are to hot, if the engine is running lean that is.

Go into the jbeam file, and edit the parameter to raise the turbo overheat threshold (if the default is 750 - raise it to 900 or more). The only thing you can do in automationgame is drop the boost.

But by all means, feel free to keep playing around with every other combination of settings. I guess that’s half the fun. I’m sure at some point you’ll figure it out. 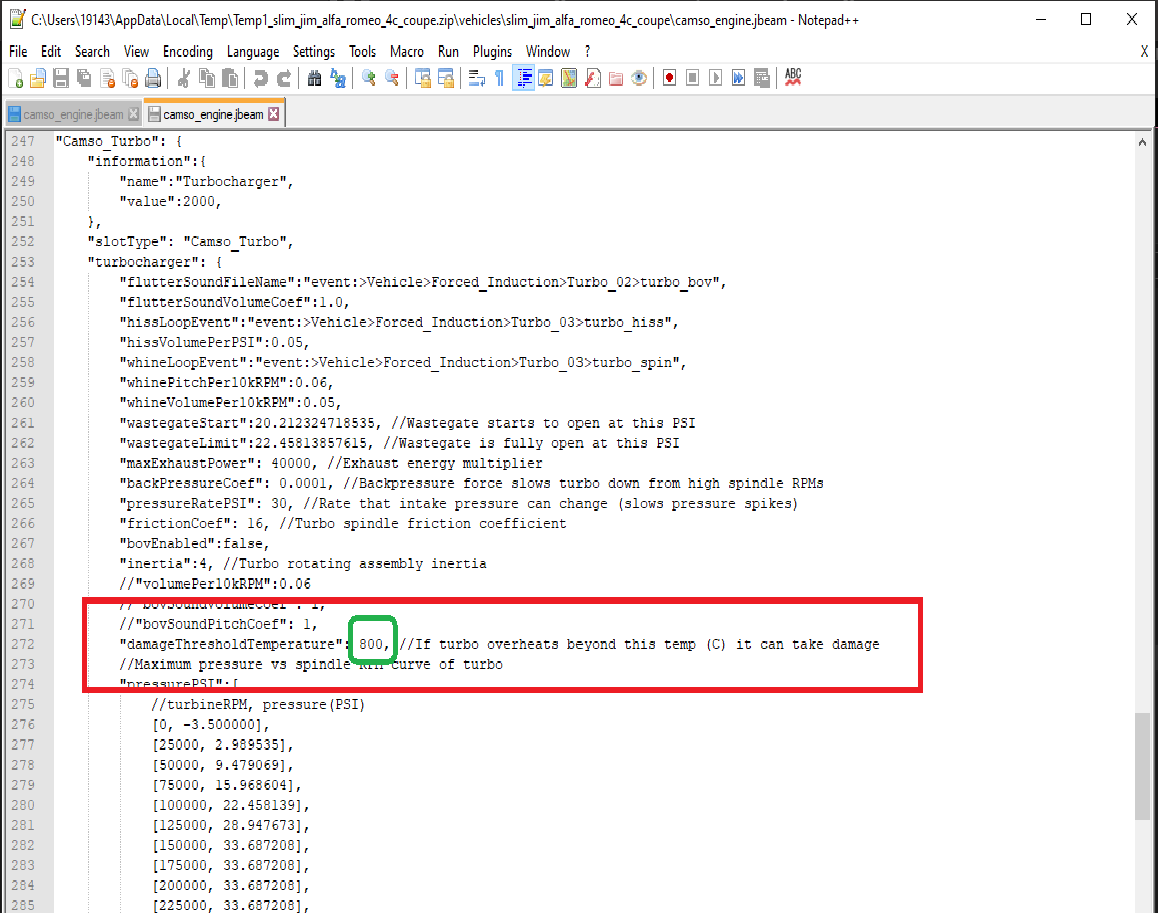 Here are some screenshots from the game to see if anyone can help me, I lowered max boost and the turbo takes more time too overheat but it gets to 230/240kmh and starts overheating. Yesterday I made another car with a turbo and it works just fine doesn’t overheat, nothing but this one is getting me crazy because after I get it right I will try to improve another car, if anyone can help me I would be pleased, I know I can change the JBEAM file but I am trying to make it work without changing the file 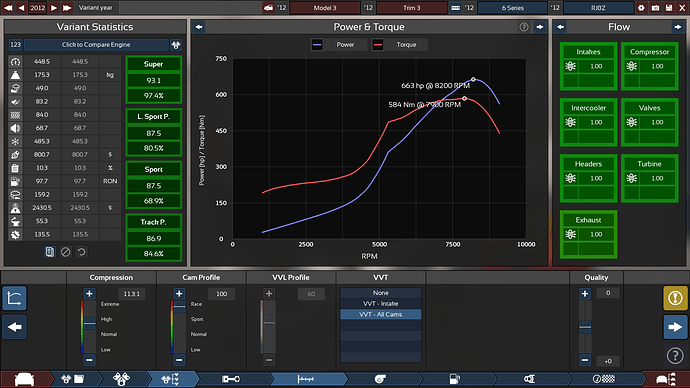 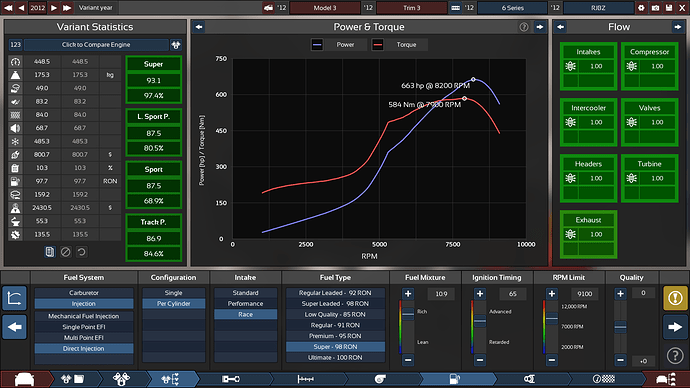 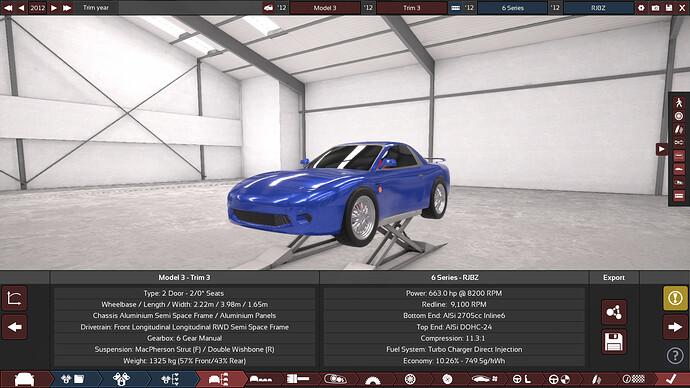 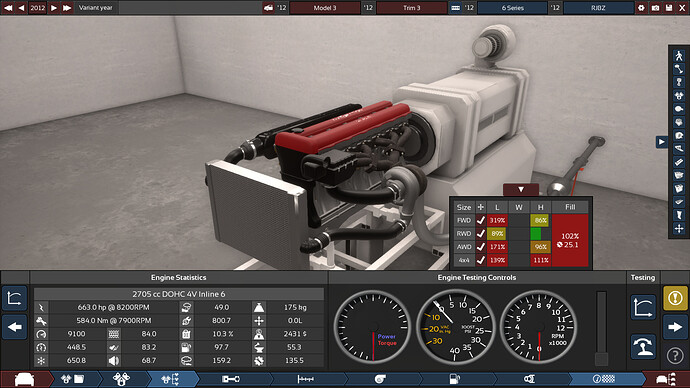 Might be a problem with singel turbo on a I6, but we have to wait a couple of months for the turbo revamp.

Very high compression and AFR. Try set the AFR at 12 or 12.5 and lower the compression.
Also lower the cams to 85-90. See what happens.

Could try cloning it and testing the clone. I’ll see if I can reproduce this in a 1/2 hour or so.

@jmladeiras I’d recommend messing with the mod on the beam side of things. I’m not at my computer rn, but I’ll rundown the steps as best as I remember:

On another note, it is normal and actually preferable for the compressor/turbine to have restricted flow. You may lose a bit of hp (but possibly even gain some) by making that compressor waaay smaller, same story with the turbine. But the turbo will kick in SO much sooner that way.

What is your bore and stroke size? 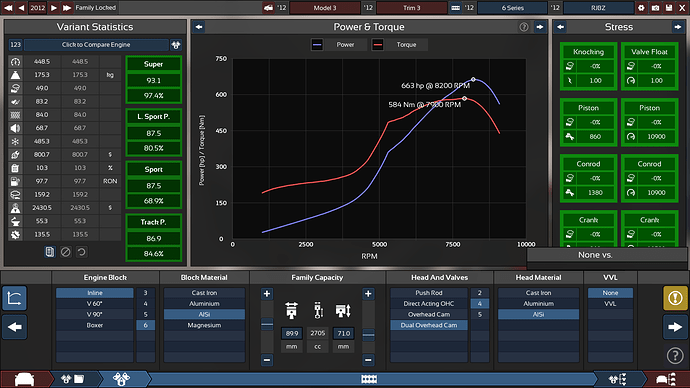