I am aware that the current Turbo calcs are based on 80’s tech, but i was wondering if that was the sole reason why the majority of my turbo setups running moderate or high levels of boost end up with a torque curve that looks not too dissimilar from this ^ ?

Is it just due to early tech Turbos or am i doing turbo’s incorrectly? Would it be feasible to have a slider or something that flattens the torque curve artificially? (If i am not mistaken that is usually done via ECU in the real world and would probably function like the restrictor plate tuning setup in Gran Turismo)

I apologize if this subject has been brought up before but searching the forums got me nothing.

Through tuning you can flatten the torque curve already, keep playing with the sizes, exhaust size, and cam profile.

Right now, your boost curve depends largely on a few things: Compressor size, turbine size and max boost. The sizes are partially determined by the size of your engine, too.

When it comes to making nice boost curves, the main thing to observe is the ratio of the compressor to turbine size. Larger compressors and turbines take longer to spool, but also provide boost to higher range. The trick is finding the ratio of the turbine and the compressor that yields the longest boost. A turbine that’s larger than the compressor is more likely to yield a very late spool with no sustained boost, particularly with high max boost and high A/R ratios. I would suggest starting with a turbine that’s about 0.8-0.85 times the size of the compressor, then going from there. Sometimes, reducing max boost and A/R ratio yields a better balanced curve, too, though reducing A/R ratio will reduce max power.

For example here’s the link to one of my designs. It’s a odd ball of an engine but it enjoys a nice torque curve.
http://www.automationgame.com/phpBB3/viewtopic.php?f=35&t=3684&start=20#p73111

In addition, the examples I’ll provide are definitely not your speed, and also have all the quality sliders maxxed as they’ve been placed in overboosted hypercars for billionaires. But as a demonstration of long boost, it does demonstrate that even with the constraints of current tech modelling, Koenigsegg One:1 type power curves are still entirely possible.

In this case, here’s my take on a 1kW engine, produced by, of all things, an i6 turbo: 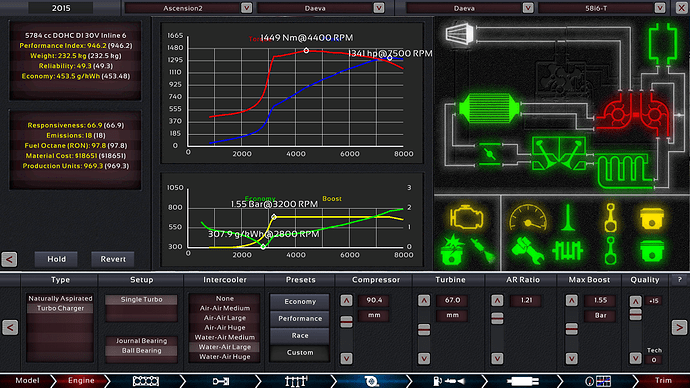 Due to drivability penalty of high boost turbos, I had to keep the torque as constant, for as long as possible. Thus, this engine goes into a front-engined, RWD coupe… which laps Green Hell in under 7 minutes. A larger turbine would mean higher power, but would have been a bit of a waste as it would also have made the turbo boost very peaky, had I not limited the boost to 1.55bar. Thus, I don’t need an excessively large turbine, in fact reducing the size reduces minimum spooling rpm. This car also returns a fuel economy of 14L/100km, because of the sub-maximal AR ratio and limited boost, otherwise that figure would probably be closer to 25L/100km due to having to enrich the fuel mixture and reduce compression ratio, and the car would be undriveable. 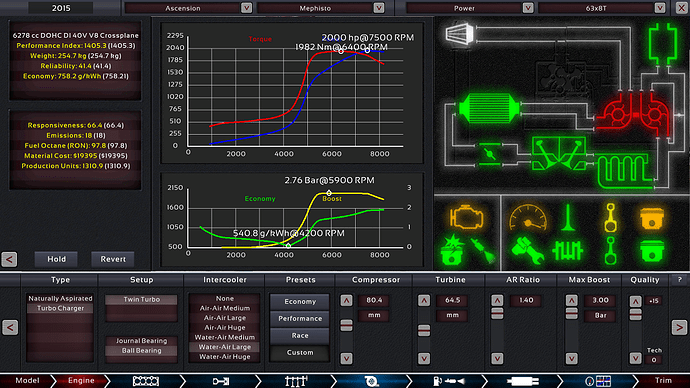 More boost at the top end does mean less power band. It also does have a horrible fuel economy. But it’s a good demonstration of the 0.8 turbine:compressor size ratio that I tend to use. A 2000hp engine with any other turbo setup would probably be slower and less balanced around the track, at least as far as I know (I haven’t properly looked at this engine since the new version came out.)

Thanks Strop for the excellent write-up on turbo setup

In modern passenger cars, turbo boost is electronically regulated, in other words, actually limited to a certain maximum level; this is done to produce long, flat torque curves and also to offer different performance versions.
So there is a large electronic component involved in addition to (the very nicely modeled in the game) turbo sizing thing.

I’m not sure how this electronic control could be implemented in the game, but it would be nice. You could, for example, limit your maximum torque by electronically limiting max boost under certain
rpm range - and you would get better reliability and possibly economy as a result. Or you could improve your low-down torque by allowing more boost pressure under low rpm. This is a common practice
in modern passenger cars.

This is what car companies of today are doing, and then they do a “GT” version or something, where sometimes the only
change to the engine is altering the electronic control to allow more maximum boost. This is also what tuning companies do when they sell you a “performance chip” for your turbocharged car.

edit. here is a sample power/torque curve of a modern passenger car engine with a sporty edge, the Golf GTI: webwombat.com.au/motoring/ne … -gti-5.JPG
Notice where the torque curve goes completely flat? That’s where the electronics start to cut back boost pressure and after that, limit it actively to such level that the torque
stays constant. This way the engine gets a wide operating range, strong low-end, without causing too much stress on the engine internals.

You can use the boost limiter to stop your torque curve looking like an inverted V.
Here is one I made which is quite flat; 95% of max torque is available between 3000 and 7000rpm 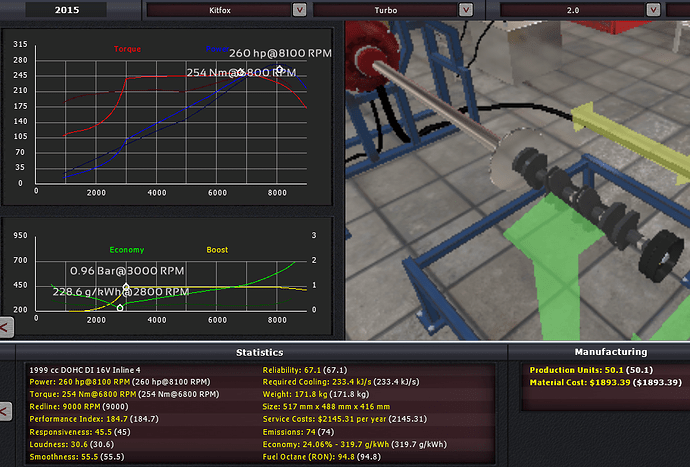 Currently it is quite difficult to replicate a modern turbo engine with max torque available from 1700rpm while keeping your power high at the top end of your rpm range.

Boost limiter? You mean the max. boost setting? Or is there some other option somewhere in the game?

OK. I’ve been playing with turbo engines a lot now, and one thing I’ve noticed is that sometimes the actual boost of the engine will not reach the maximum that I have set, even when all engine components are working right (now yellow or red component icons apart from the turbocharger itself). I am assuming this is due to turbo sizing or fueling simply not being enough to reach that set maximum limit. Am I right?

That is correct, the maximum boost is just that - the potential maximum. Doesn’t mean your design is capable of hitting that maximum.

That is correct, the maximum boost is just that - the potential maximum. Doesn’t mean your design is capable of hitting that maximum.

The boost slider controls the boost required for the waste-gate to open. If the turbo doesn’t reach the chosen boost value the waste-gates never open.

Not sure if I should start a new topic, but how will turbochargers be modified to bring them up to date? For example currently it is based on 80s technology. What will happen to bring them up to date? Eg spool sooner for longer etc? More reliable?
I am doing another auto magazine roundup and might adjust the numbers for the cars that have been turbocharged to make them competitive.

Twin scroll turbos should be added to the game soon

Twin scroll turbos should be added to the game soon

Turbos to the V6 with the next big update, too, I think. Then hopefully things like single turbo set-ups for the V6/8 will come down the pipe, along with twin-parallel turbos for the I6, and then sequential turbos one day, too. Don’t forget the variable geometry units, either. So much to do, for just one small part of the game.

Then we wait for the superchargers…

An old topic but still relevant, at least for a noob like me.

Unless I’m missing something it seems that powerful modern twin turbo engines with a flat torque curve are not feasible, which is a bummer.

Could you please not necro

So starting a new thread is preferred?

If you wish to continue the discussion, yes