Turini - Made in Modane

Founded in 1960, a subsidiary of the SARA to offer more creative space to their tuner and head of motorsports, Amédée Turini

While the SARA 4 was a great hit, it also created tensions with associated tuner Amédée Turini, who didn’t want to work on sport front wheel drives.

Jeanneret chose to let Turini emancipate himself (somewhat), as a “independant” subsidiary of the SARA. Thus he could completely focus on building light sport cars, “berlinette” as we call them in France, using SARA engines, but with much more freedom on his design choices.

In the meantime, he also tuned the engines, in mellower states, to the SARA, and allowed his name to be used on the sporty/luxury trim the SARA produced, and was head of competition for both the SARA and his own company

Amédée Turini had radical ideas for his Berlinette, but then discovered almost immediately that building a car was about making compromises. He wanted to build a backbone chassis, with a fiberglass body glued to it, and a rear overhang engine, which helped with accessibility and agility (while being downright dangerous for inexperimented drivers), but soon discovered this was not possible within the budgets he had, and that he had to settle to mid engine on a spaceframe or rear engine on a monocoque, with a heavier weight.
He also had to deal with outdated designs, the framers lacking skills to do more modern styles while keeping a rear engine.

He settled for the sporty setup with a 40ish design, hoping the small engine would give enough room for easy maintenance, a critical element on a rally car.

At 1465$ to build, Turini still managed to be able to sell the car at close to 2000$, its lightness making the car a track demon that didn’t need much more preparation to perform efficiently in competition 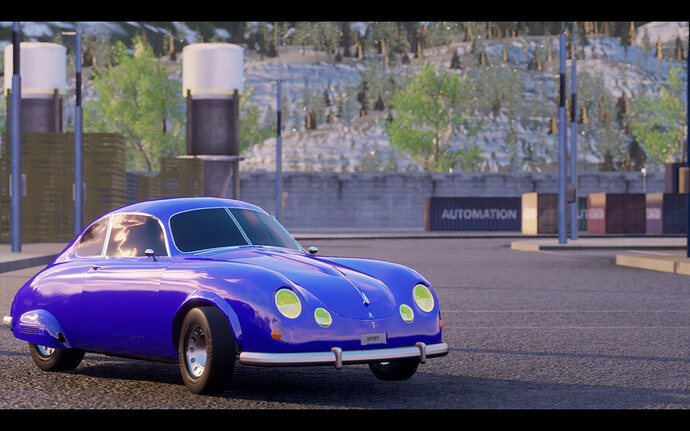 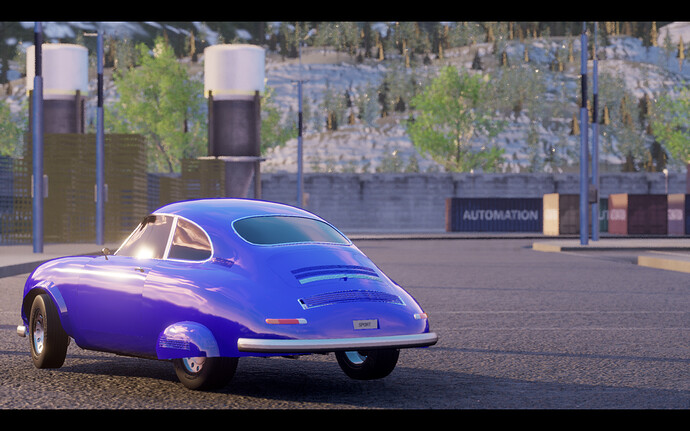 You made the 356 body look like an original A110 - fitting, considering that Turini ought to remind me of Alpine.

The starting point is a mashup of Rédélé/Alpine and Gordini, but that “not-356” is much sleeker than a Berlinette, even though I did my “best” to batardize it with louvers and grilles in excess.
Actually, now that I look at it, I forgot about some of the most iconic fixtures of the Berlinette, such as the hood hinges… But then I think it saved me from being in a strict plagiarism.
The references are obvious, but it strays far enough from history to be entertaining (to me at least, which ultimately is the point).

For 1960 your engine performance and car performance is GREAT!
198km/h from 116hp in 1960 it’s a score that i think it’s the best.
Also acceleration is good but the best are brakes.(For me)
And looks good and it’s light like lotus so you should make more lightweight performance cars.

The references are obvious, but it strays far enough from history to be entertaining (to me at least, which ultimately is the point).

That’s how I love making cars. Starting from a few real designs and engines and then creating something similar but different, that should be plausible for the time. I really like the Turini Berlinette, also in terms of styling.

Thanks a lot. As you said, for not-quite-Lotuses, or not-quite-Alpines, the trick is in the light weight. 116hp from a SOHC 1600 cc isn’t that hard to reach, running on super (premium) gas and accepting the fact that you have an expensive, not very reliable engine with a narrow power band and no fuel economy

Also, this is a 12300$ (building cost) car featuring a low quality basic interior and outdated security features - so I had some money to spend on the powertrain and suspensions.

It works well because there is a consistency to the car, which I think is cardinal to building interesting cars. You can get extreme on some parameters (twin DCOE on a 1600 cc is overkill), but if you go overkill on everything you actually end up with a bland car, lacking personnality. Limiting youself in the options you can use (for lore or period-correct reasons) actually helps ; keeping an eye on Engineering Time too !

Thanks a lot ! I’m still not satisfied with the multiple vents, and didn’t find how to add agressivity yet, but this a low-production, hand-built fiberglass car so I guess incremental improvements over the years will be possible
(also, there isn’t that many rear/mid engined bodies available so it is poised to stick for a while)