TV & Movie Car Challenge (Round 8): Say That You Love Me

Say That You Love Me 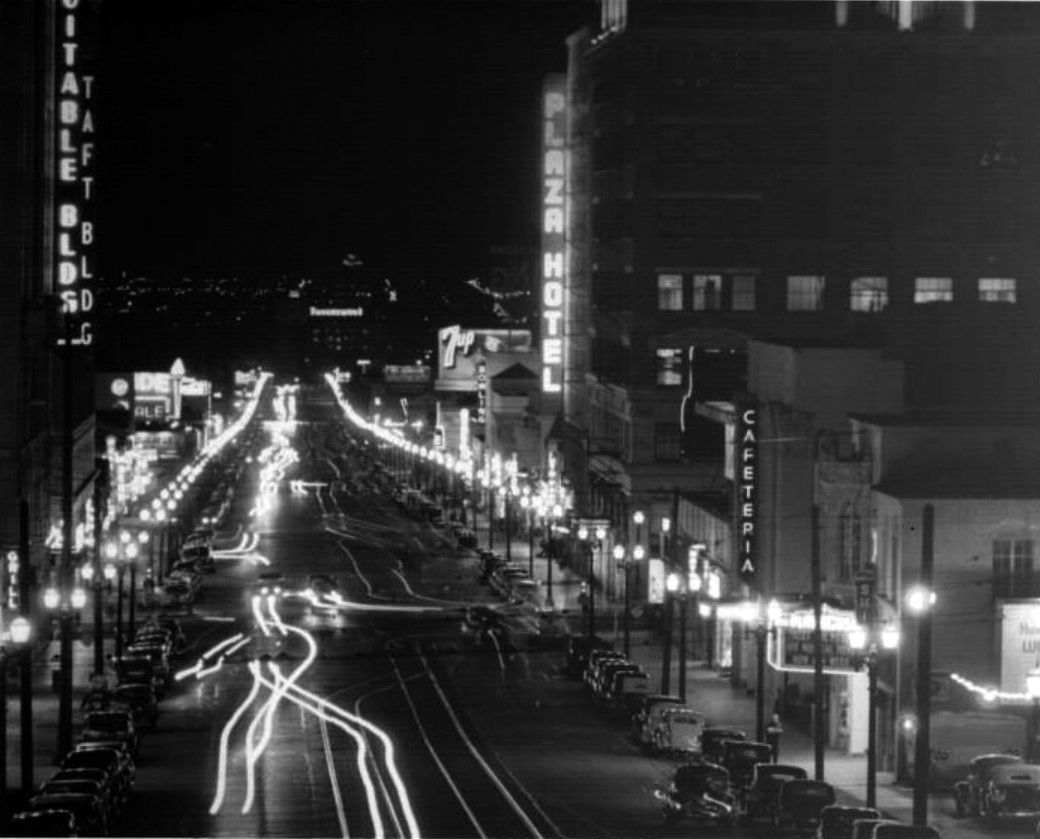 " Whoever went to the movies with any regularity during 1946 was caught in the midst of Hollywood's profound postwar affection for morbid drama. From January through December deep shadows, clutching hands, exploding revolvers, sadistic villains and heroines tormented with deeply rooted diseases of the mind flashed across the screen in a panting display of psychoneurosis, unsublimated sex and murder most foul. " That's right folks, it is post-war America. Specifically 1949, and Film Noir is currently dominating Hollywood's theatres. Small-Name Film Studios are in the midst of filming what they hope to be a breakthrough in Film Noir and American Cinema. This film is to mark the debut of a fresh set of actors, and a fresh style of cinematography never seen yet. The premise for the film goes as such;

1948, Los Angeles, California.
A detective is in search for someone supposedly responsible for the death of a fellow detective. Multiple people are suspected. Yet one man, and possibly one woman are suspected by our detective.
Will he find it out? Or will he be the next one to be found out?

And with most of the scenes figured out, it was all down to this final one that they hope would cement their legacy in film. A car chase scene through the streets of rainy LA, swerving around through traffic and bouncing up and down as two cars with two clashing figures within them battle it out.

One problem they seemed to have overlooked however; They haven’t planned things out and they don’t have a car for their detective to drive.
In a rush, they contacted the Big Three to see what of their offerings could be used.
But none of them really piqued their interest enough, unfortunately.

And so here you are, one of the (Hopefully American) automobile manufacturers that Small-Name Studios reached out to in a jiffy.
Your task? To design an interesting enough-looking, and hopefully interesting performing coupe that would fit their detective.
Hopefully you all have gotten the gist of that.

Your goal is to make a 1940s American Car. Preferably Rear-wheel-drive, a fullsize, either a coupe or a sedan, and costing less than 20,000 Automation Pesos.
Oh, and paint it black.
Seems simple enough isn’t it?

Do note of some minimums and requirements that you will need to meet:

This round is set so soon after the end of the Second World War that regular leaded petrol ought to be mandatory. Also, the model and trim years should both be set to 1948 or 1949, which is when the movie takes place.

The Fighting '40s The 1940s is an interesting era for cars of all nationalities. It was an era of a lot of experiments, some successful like the Traction Avant and some failures like Crosley. This is the era where cars began emerging from their extremely primitive roots and started to look like and be designed like the machines we know today. Unfortunately, because this decade is a major changeover point and because the first half was consumed by a massive World War II, some ancient technologi…

Just throwing this guide for an accurate 40s American car to here.

Hmmm, now this seems interesting now when the Hillstrom brand is created…

i will kick things off with the 1946 Valiant, using a car that was first launched in 1941 but was halted due to ww2. 1946 saw the car re-launch with a new front end treatment and a new 3.8l inline 6 engine 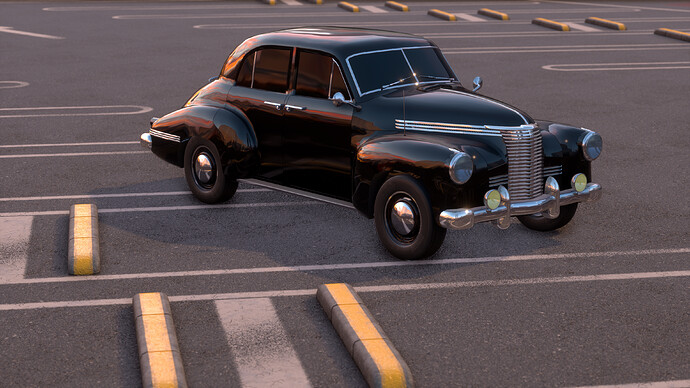 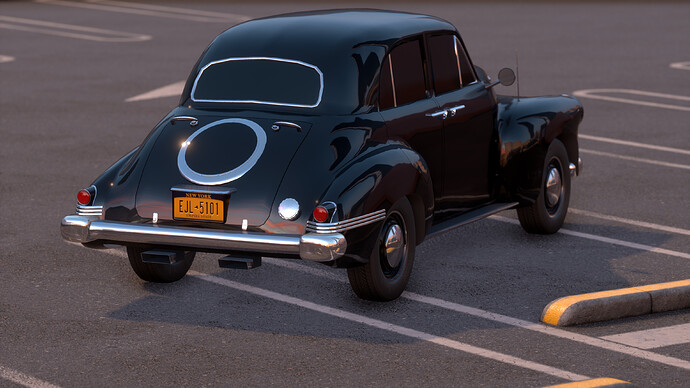 Phelps? Is that you? 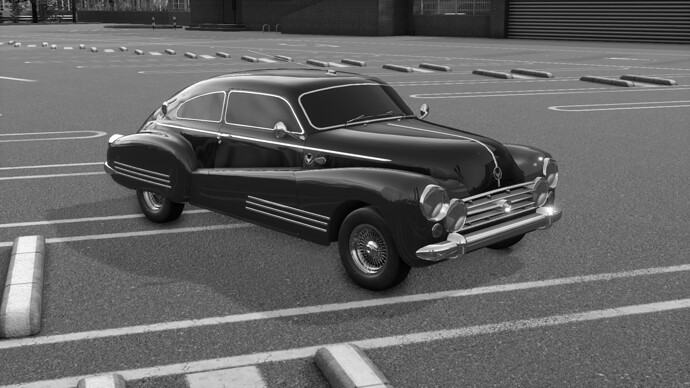 Photo2211920×1080 745 KB
The '48 Nimitz Sport is the last addition to the Nimitz lineup.
It features a new Admiral-series 195ci I6 capable of 122hp and 164ft-lb, paired with a 3-speed manual transmission that makes this wonderful piece of American engineering achieve a top speed of 123mph. It comes standard with a high-quality AM radio, two-points seatbelts, electric turn indicators and a racing-inspired interior 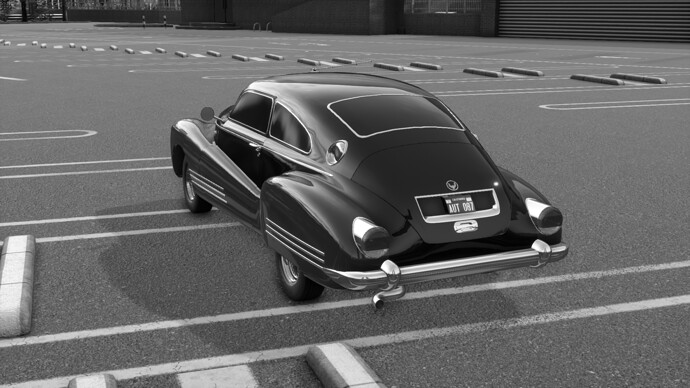 Photo2231920×1080 736 KB
Starting at the low price of 14300 Automation Pesos, the Nimitz Sport is the best way to let people know that you like quality, performance and that you support American manufacturers, because…
Nothing Is More American Than An American Motor Vehicles’ Car!
1 Like
CriticalSet9849 4 July 2020 09:11 #11 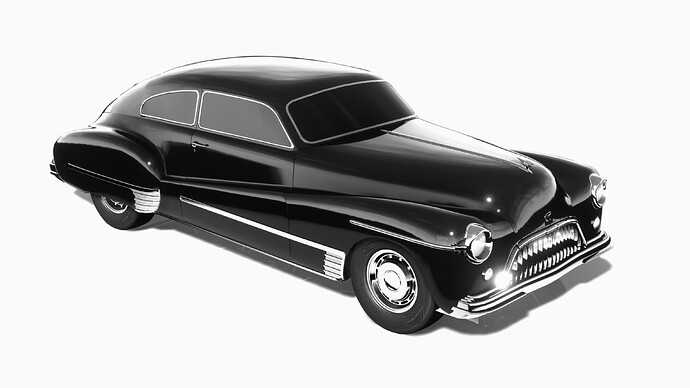 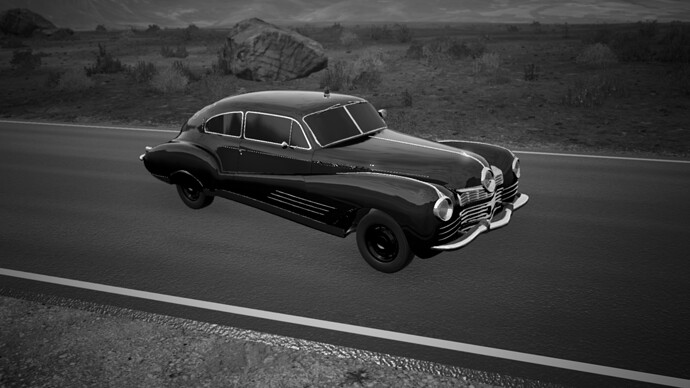 Introducing the ALL NEW Silverhare Commandant for 1948

Other brands might still be selling old designs, but the Earl Motor Company brings you the brand new Silverhare Commandant with longer, lower styling but as much space and as many features as expected from a premium car - including a standard radio! But as much as we have learned in design, we have learned in engineering, and 1948 Silverhares feature the brand new overhead valve Caliber Eight engine, with up to 136 horsepower! Already the darling of reviewers and racetracks everywhere, the Caliber provides the power you never knew you needed with the reliability you’ve always expected. 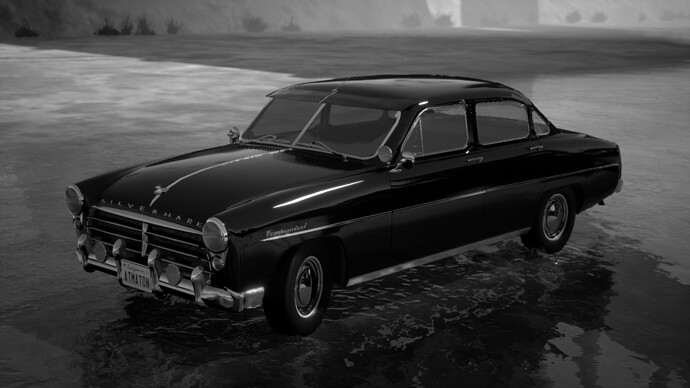 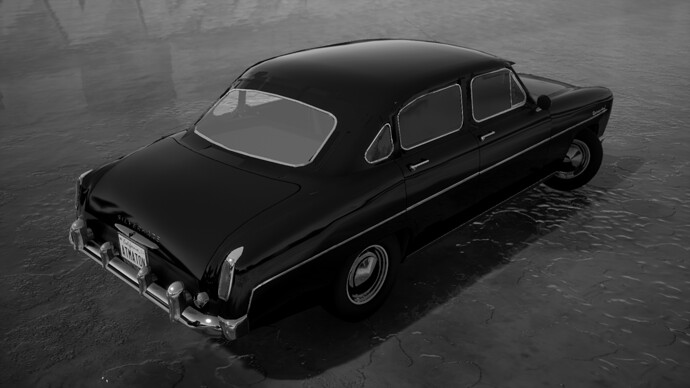 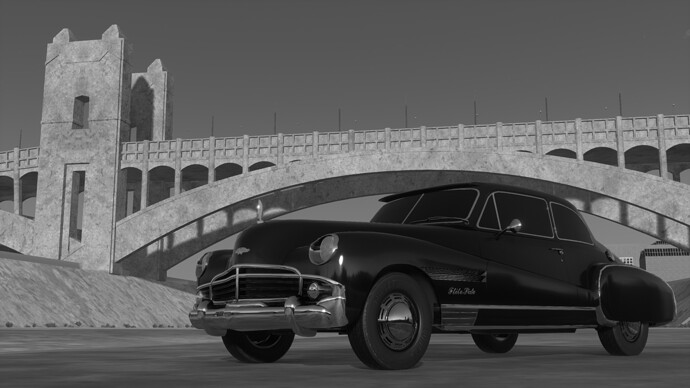 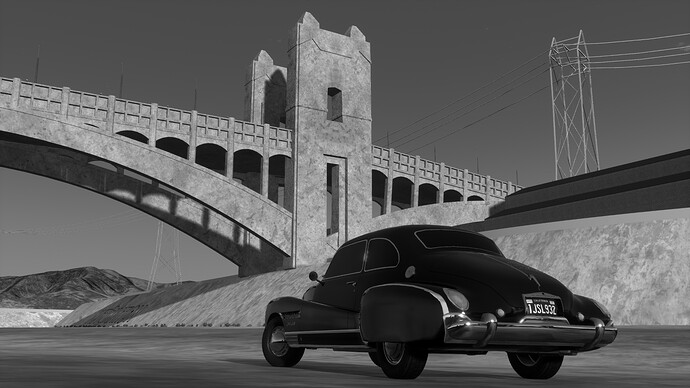 around 2 hours ago because im dumb

Results will come in a bit

As preparations finished, all seven cars have arrived on set. And now all that was left to do was to test them out. 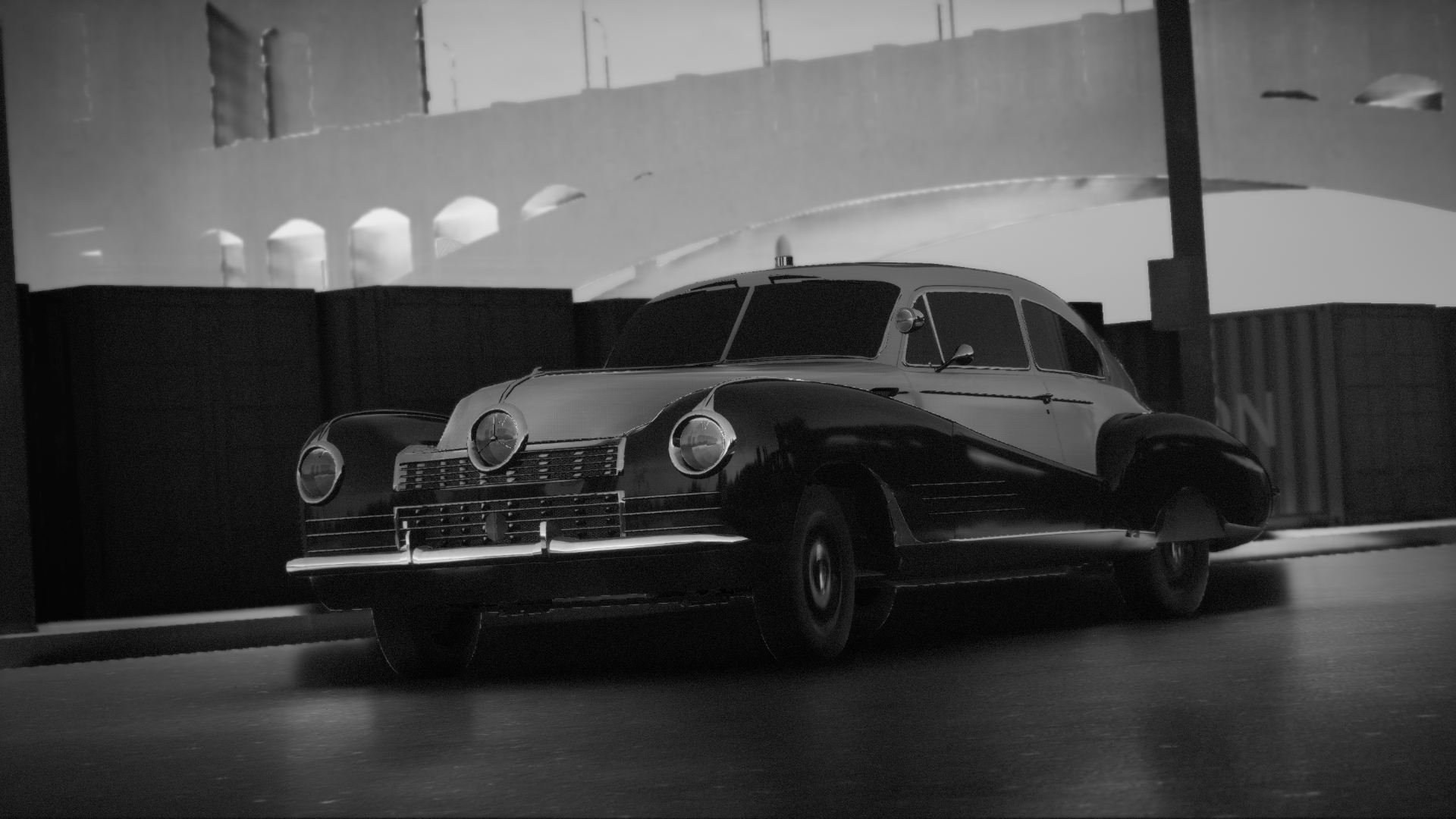 With its white and black police-like appearance, This car attracted him simply from that alone.
He took the keys from the producers and fired up the 300ci OHV V8. Going for a quick test drive, he found the car to be not the easiest to drive with the big engine, and the lack of a radio and the quite stiff dampers didn’t help this car either. And being a fleet-spec police-mobile, it definitely wasn’t all too special for the type of detective role he would play.
His remarks were:
“While stylish, it lacks refinement and might be a little bit too fleet-like for my role.”

The second car was the Staier Jovian (@nightwave), which looked nothing like anything he’d have seen before, donning space age looks and lights of questionable legality. 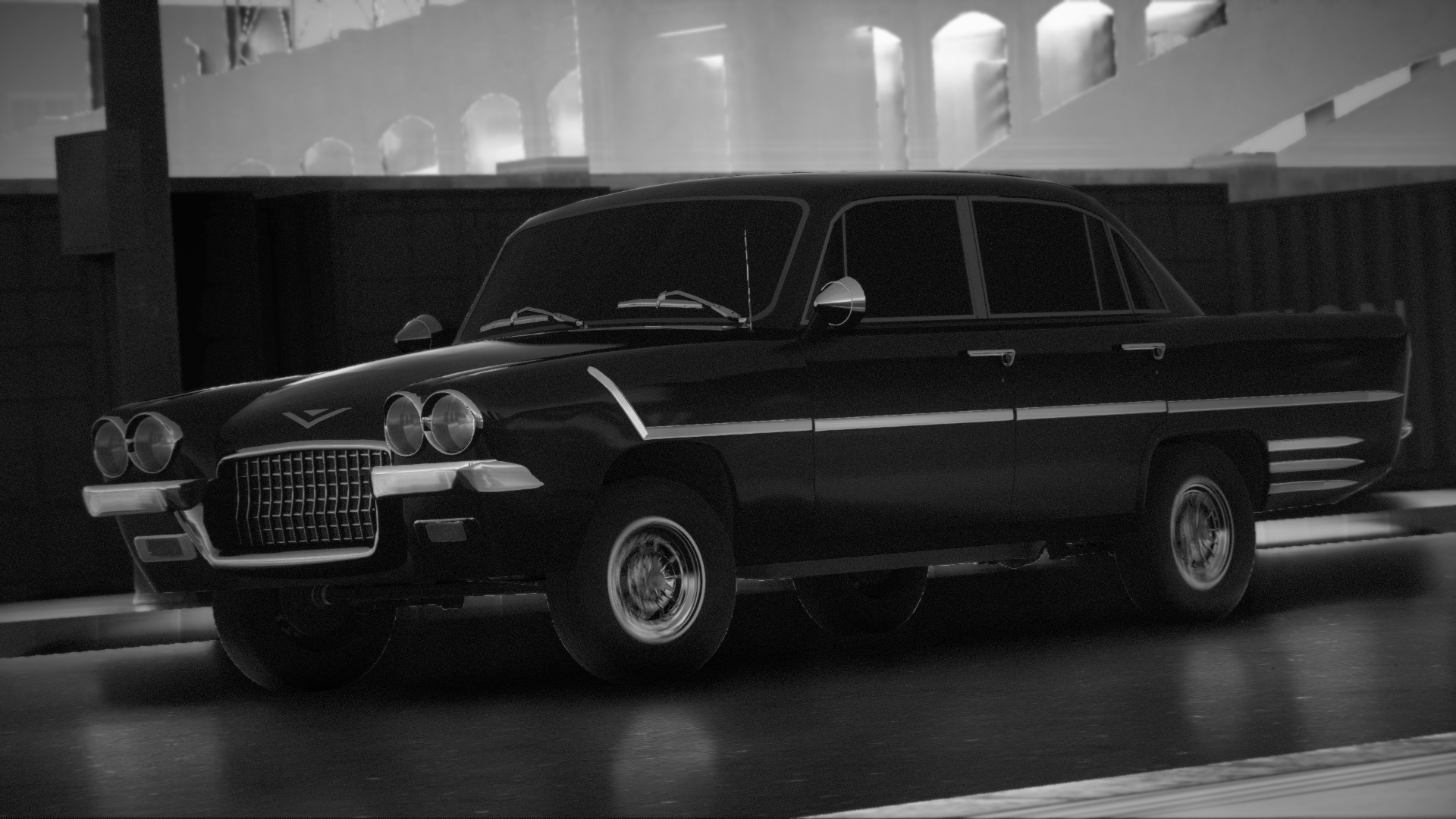 Hopping into the car and starting up its Inline-6, and immediately found a flaw with its handling characteristics which was likely due to the fact that like some kind of heavy-duty truck, it had a solid axle front suspension. That flaw aside, the car had a radio and was surprisingly comfortable despite having heavy-duty suspension. But with its unusual driving characteristics and weird looks, the car was unfortunately a no for the actor.
His remarks were:
"What year is it?" 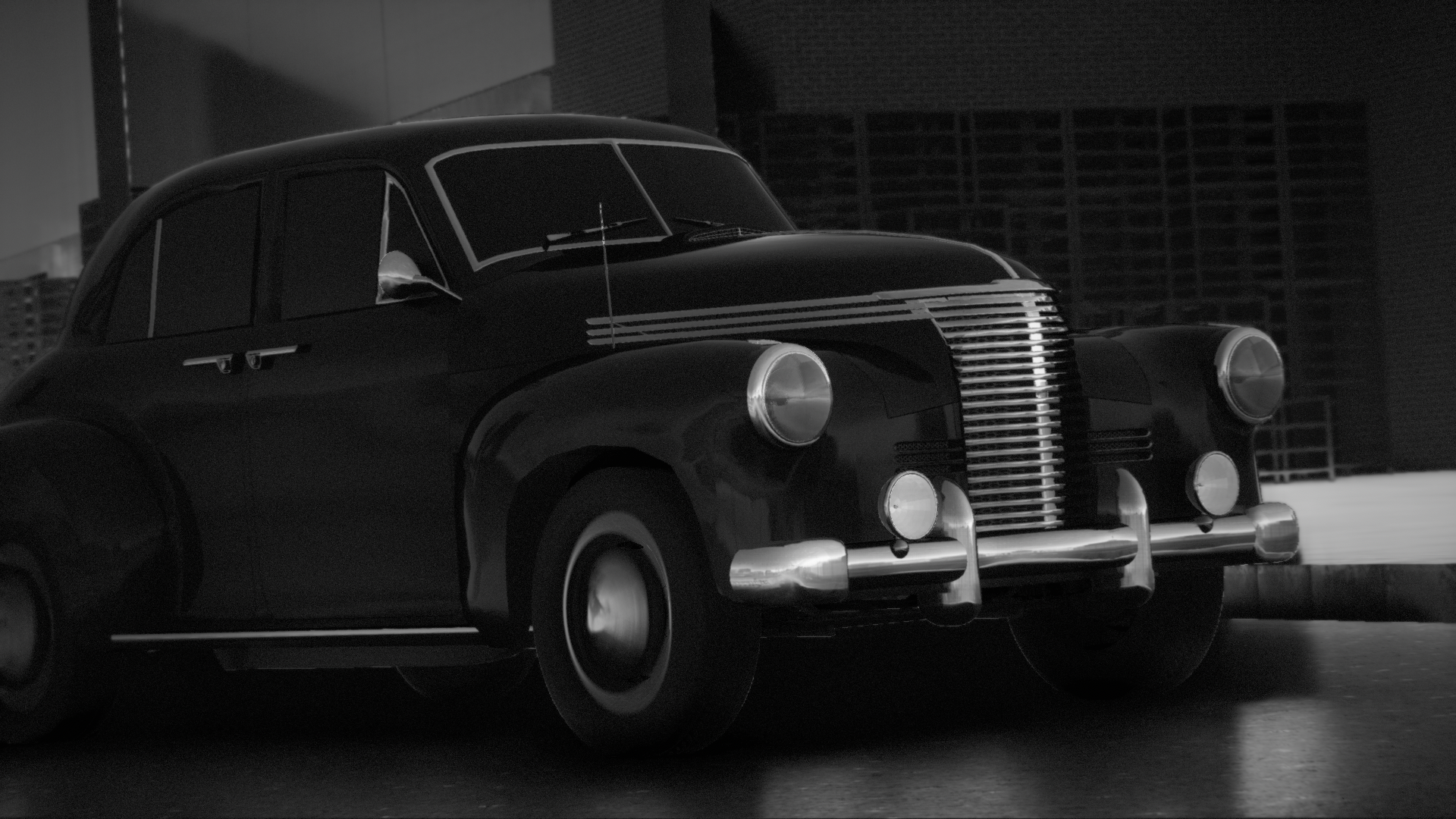 Looks-wise, the car felt not too out-of-place in somewhere like Europe, but on the streets of LA in 1948? It was too small especially for an American detective’s role. Still, wouldn’t hurt to try it out and see if it could change his opinion.
Hopping in and firing up the 230ci Inline-6, due to its short wheelbase the car was fortunately very easy to drive, and it was rather comfortable as well and gave off a great impression for its small size.
Despite all those good remarks about it, it still felt too small for both the actor and the producers, and so this little car had been rejected by them.
The actor’s remarks were:
"It seems they have forgotten that we asked for a fullsize, huh?"

Fourth came the AMV Nimitz (@ZoomZoomer32), another car with lights of questionable legality, but now with a more traditional bodyshape. 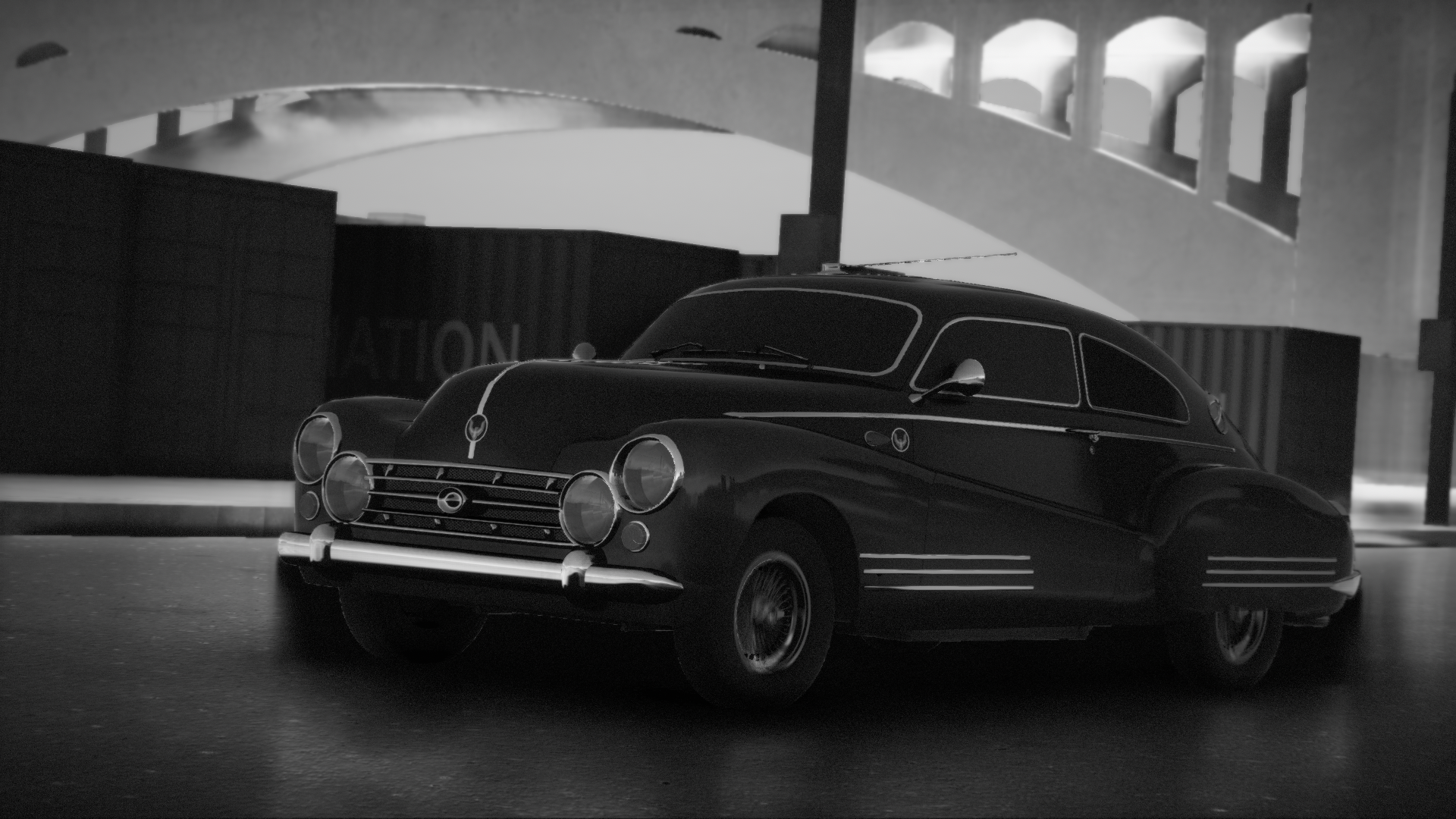 The car was in a weird limbo, despite having rather tacked on looks, it still gave off quite an impression.
Overall, this car was the best handling out of all, thanks to independent rear suspension which was quite unheard of. However, it traded handling for comfort, which wouldn’t help the actor at all when it came to long hours of filming. And because of its looks with headlights that probably weren’t legal, they had to sign this advanced coupe off.
The actor’s remarks were:
"With all that fancy technology you’d expect it to at least be comfier."

And so moving onto the Silverhare Commandant (@patridam), a big, maybe slightly European-looking fullsize sedan with a mighty presence that really had fit its name. 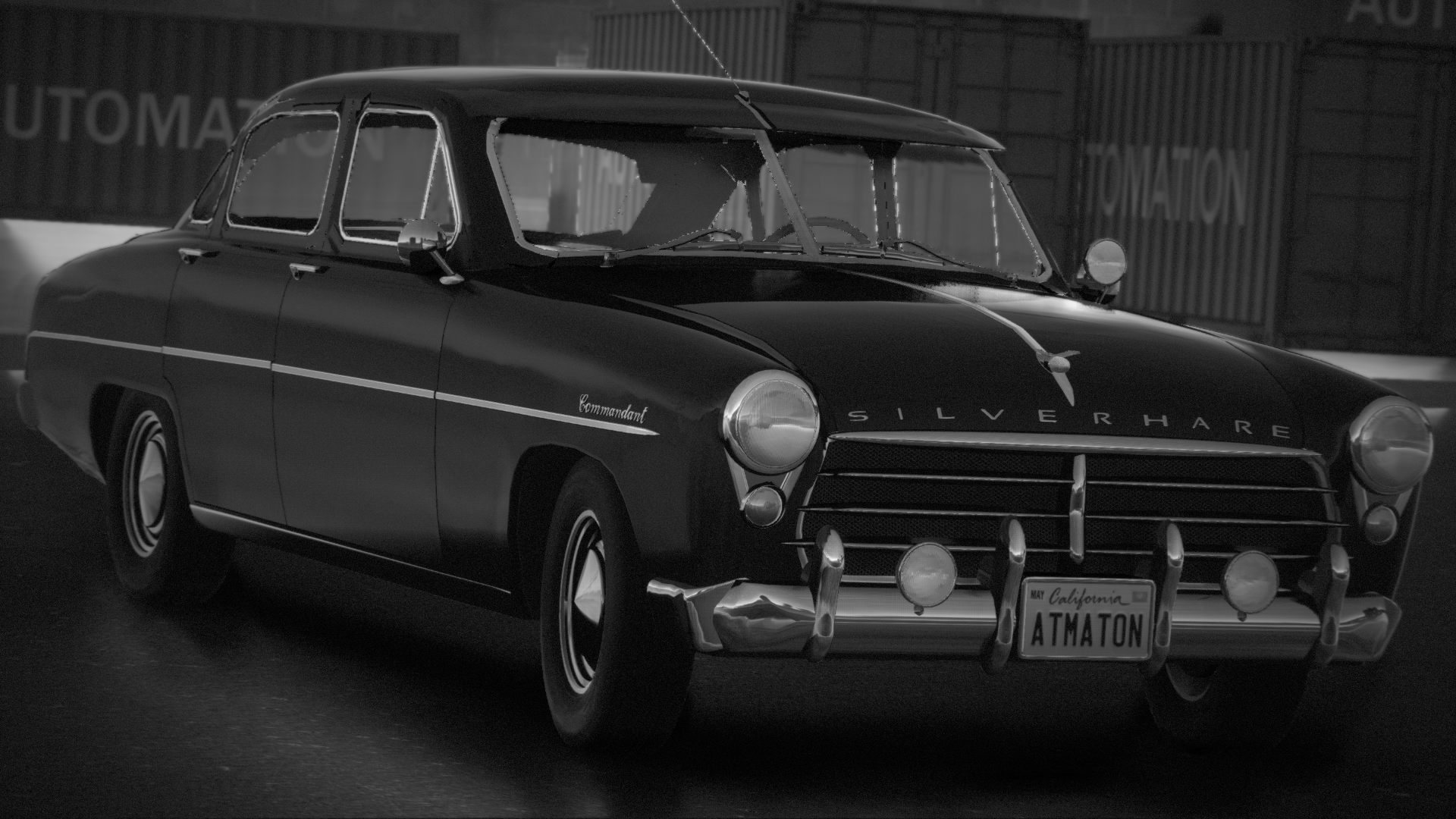 Taking a drive, the car was noticeably heavier to drive than the other ones, due to its large 300ci V8 engine and body. It was still fairly comfortable however, and gave off an incredibly striking presence.
But due to that presence, it felt more like a villain’s car than it did a detective’s. And the detective would look more like a mafia boss than, well, a detective.
His remarks were:
"Would love to own one myself, but for this movie this car wouldn’t really work."

Next was the Turbol Coupe Fliteside (@donutsnail), a more traditional-looking coupe that definitely gave off more of a “feel” than the Commandant. 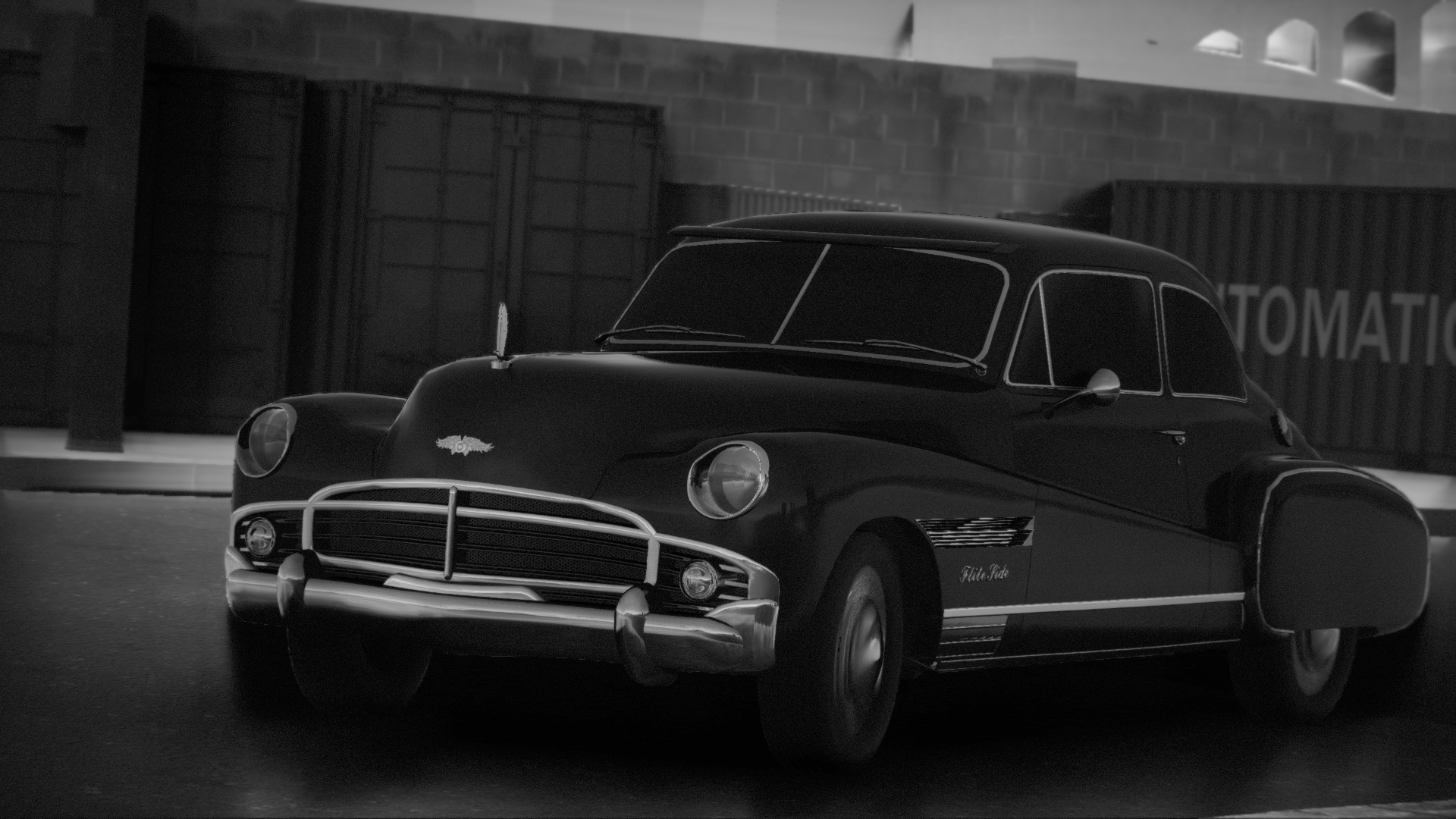 Despite that, the car handled okay, and was incredibly comfortable to ride in. However, something felt off to the actor and the producers when the car was driving around.
And as such, they put the villainess into the car and had her go around in it, and that’s where it clicked.
The actors and producers remarks were:
"It’s definitely more suited to an antagonist role."

And they moved onto the last car, the sleek-looking Morton Takirua (@CriticalSet9849) 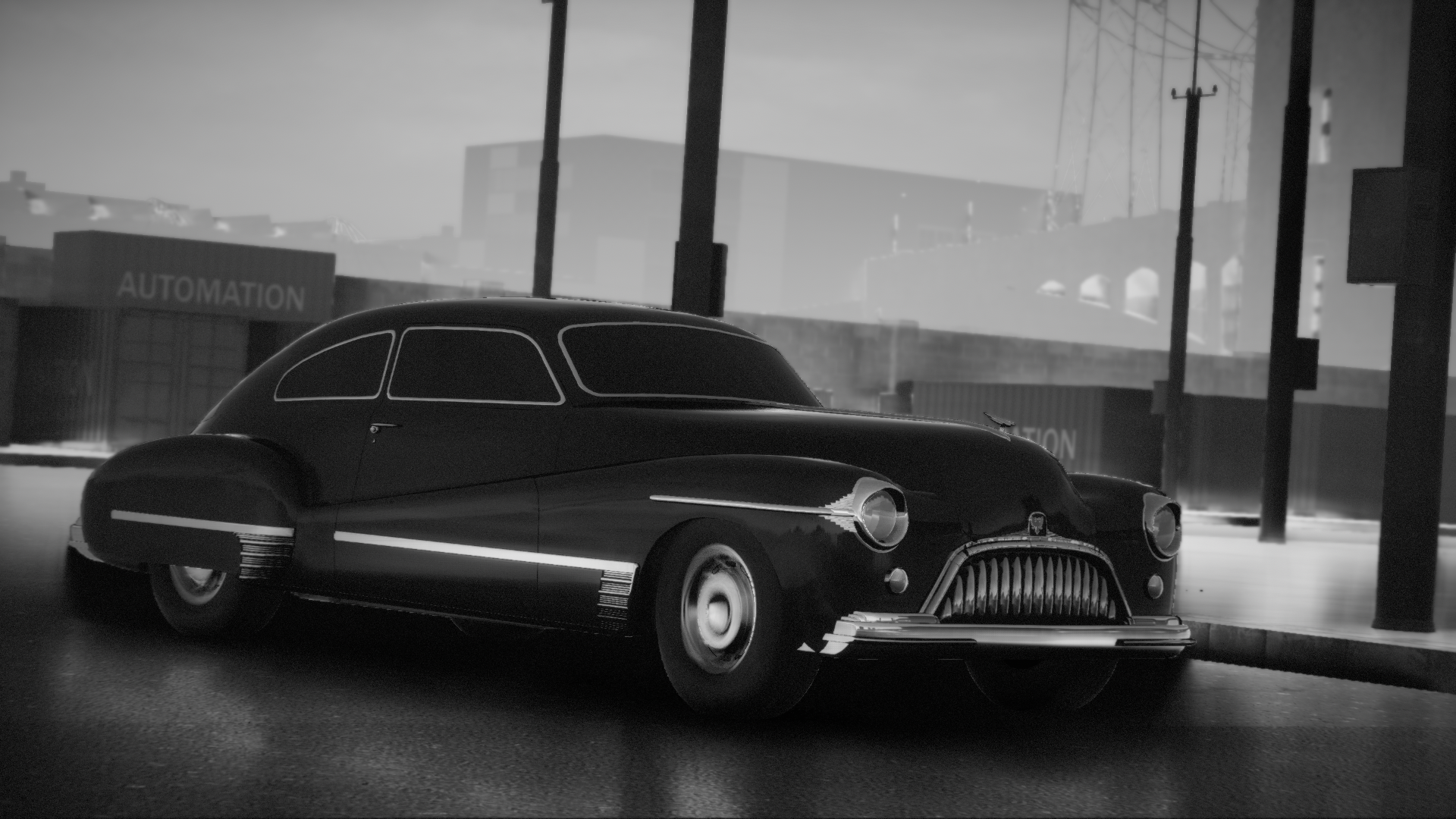 While not the easiest to drive thanks to its fairly massive 323ci V8, it certainly helped to give it that “private detective car” feel the producers and the actors were looking for. Combined with its sleek fastback appearance, great performance and feel, this car instantly won the hearts of the actors and the producers despite its flaws.
Their remarks were:
"It’s a great thing we’ve got here."

And so, with that settled, they began their work on the final few movie scenes, which they hope would cement their legacy in Film Noir.

I figured one of the cars on that body would win, those GM fastbacks are very film-noire. I had to do something different though. I don’t know how you got “European” out of mine though, I was doing my best to channel a '48 Hudson. At least I’ve broken my streak of second place by coming in third this time.

Thanks for hosting, and for the quick turnaround @variationofvariables, I’ve never attempted a 40s car before so this was something different.

Alright the next challenge is up and ready for everyone’s input:

TV & Movie Car Challenge Round 9: Amateur Hour [image] Present Day Celebrated film writer and director Shane Black’s newest creation, Amateur Hour, has been greenlit. A black comedy crime film, it takes place over the course of one weekend in Los Angeles in the summer of 1987. All the stops are being pulled out to make the setting more eighties and the actual eighties, including a huge licensed soundtrack, digital recreations of since-demolished buildings, and fleets of period correct vehicle…