Use Of Torsion Beam Rear Suspension With AWD / 4X4

Hello guys, my first post on the forum here and I wanted to ask a question that’s been on my mind for at least over a year now about the suspension options in-game.

Currently, selecting torsion beam for a car’s rear suspension limits it to FWD only. I understand this is by far the most common drivetrain design with such a suspension geometry, but I would like to question why this is the case.

I own two Citroen BXs IRL, which utilise torsion beam rear suspension across all models, and an AWD version of this car was produced in reasonable numbers from 1988-1990.

So in the course of playing around with the game to see how a similar vehicle would fair, I found such a combination wasn’t permitted - and I’ve been perplexed for some time as to why.

The diagram I have here from a resource on the Citroen BX GTi 4X4 (which, despite the 4X4 name, is actually full-time AWD with a proper centre differential instead of a transfer case) clearly demonstrates how the rear torsion beam was lifted and rotated to permit the driveshaft to pass underneath, and a universal joint installed to permit movement of the differential within the suspension travel of each wheel. 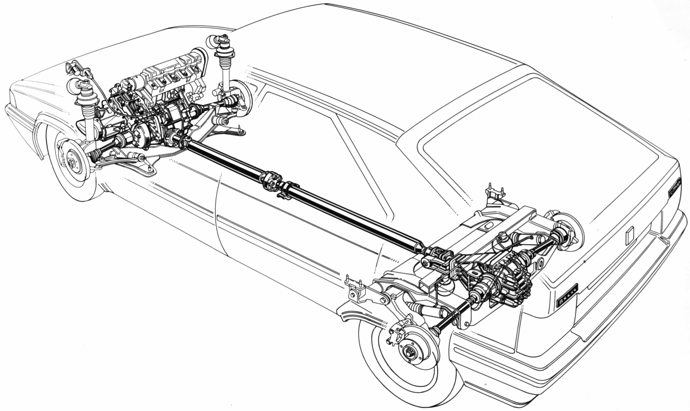 Of course this affected the rear suspension travel - the higher torsion beam and steeper arm angles result in the rear wheels moving further lengthways with the car more than the standard FWD version when forced upwards against the hydropneumatic suspension pressure - but since this system of suspension and drivetrain was fitted on this car at the least, which is a mass-produced passenger car and saw upwards of two million units produced plus well into the multiple thousands of GTi 4X4 examples, I’m curious as to why the option is disabled in-game since it was clearly not-unheard-of technology - if uncommon, but that’s Citroen with their overly funky design tendencies at work as usual.

So, if anyone would be able to enlighten me as to why the game does not have this option - whether because I’ve missed a key facet of the design that would make it unworkable in Automation, have vastly underestimated its rarity, or something as simple as it having merely not been designed and implemented into the game yet - I’d be hugely appreciative.

It’s also not selectable with L-FWD despite the fact that countless Audis used that configuration. Even more strange IMO.