Just a low-key challenge to give you something to do.

100 ft/lbs Torque per Litre or Higher 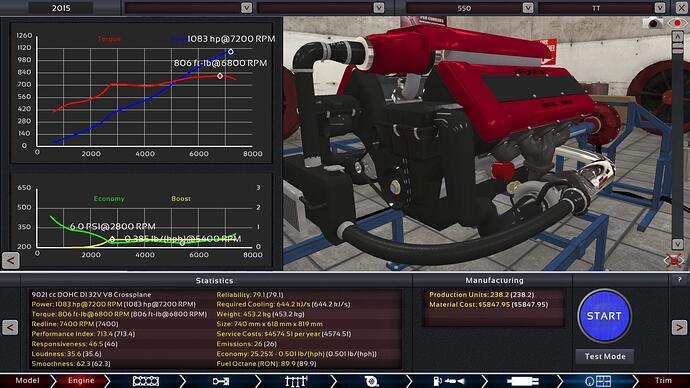 Haha totally missed that one. Been smoking too much apparently.

Very nice OHV engine, btw. I’m excited for V10s somewhere down the line to make engines like that, DI OHV. 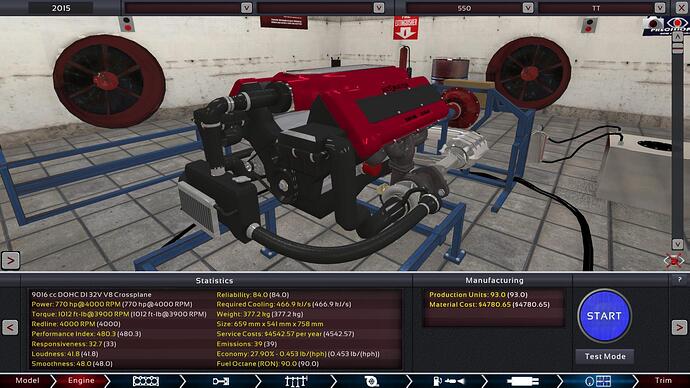 I suppose i’ll have a go. 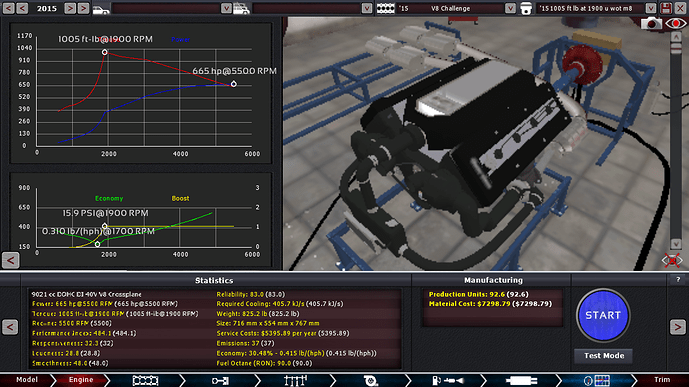 That is one damn fine Pushrodder there.

This has proven to be a very interesting exercise for me, as I normally spring for high-revving engines with top end power. Also, I shall join in saying damn that pushrod engine is nicely balanced. I’ve used it as a performance benchmark to make something a bit cheaper, a bit more powerful, and a bit more efficient, but less reliable and with more emissions (though still quite low!) 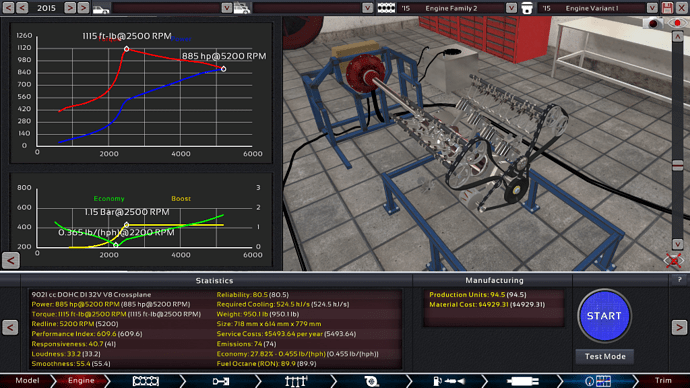 It does spool a bit later than the most recent post, that >1000ft-lbs at 1900rpm makes me giggle.

EDIT: Also lolololol my 2000th post!? I didn’t even notice it creeping up on me.

Very good Strop, but your emissions are higher then the max allowed of 40!

lolololol whoops I can’t read. Thanks for the heads up.

All that said, I decided hang it, let’s see what we can do maxing out the limits and going for 300PU, and bumping on the edge of the other limits too: 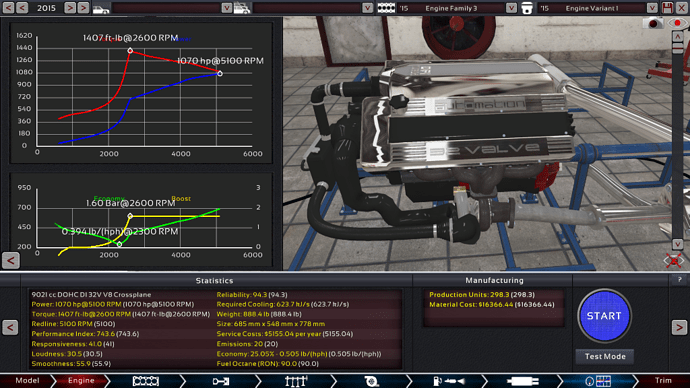 I did play around with the OHV too, and boy does it make a number of things easier. The maximum torque is a little less but it’s cheaper, more reliable and extremely capable in this application.

Will you guys accept my Tri-SO Vry-Hrd 3 Valve SOHC? (Rules state 2 or 4 valve, but what about 3 which is between the two?)

This one I went for the full 300 production units with.

[quote=“Lordred”]Will you guys accept my Tri-SO Vry-Hrd 3 Valve SOHC? (Rules state 2 or 4 valve, but what about 3 which is between the two?)

This one I went for the full 300 production units with.[/quote] 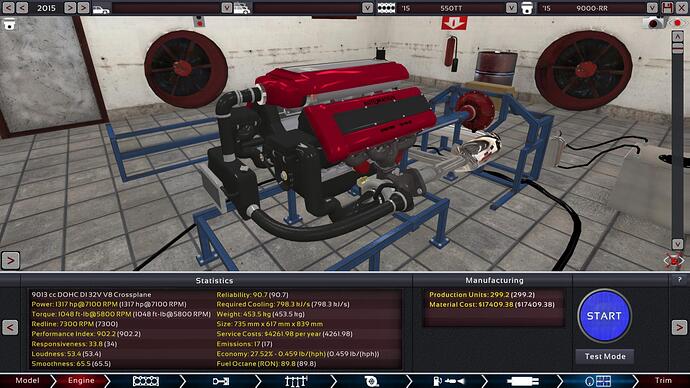 Here’s what I put together. I went for low production costs as well as low man hours while still making over 1000 HP and ft-lbs of torque. 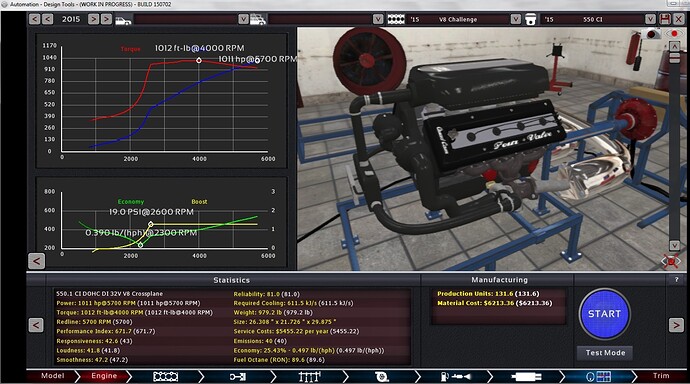 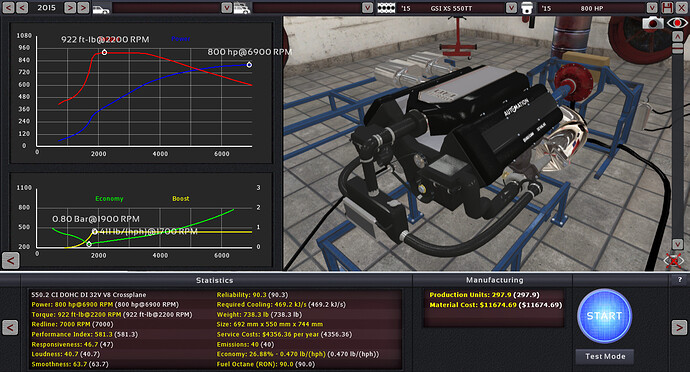 So I went back to the drawing board and decided to max out my Production Units since I left over 100 of them on the table with my last attempt. I came out with max performance and max economy variants. Here’s my most economic motor for this challenge: 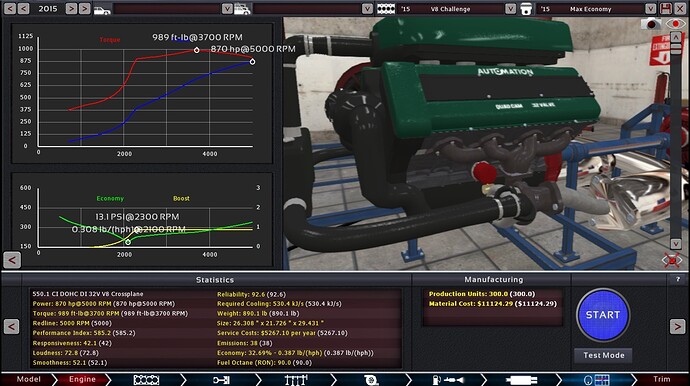 I managed to get a higher economy by using a race intake (Around 33.43% IIRC), but I would have had a reliability rating of 71, so I gave up a fraction of a percent of economy for this practically bulletproof monstrosity of a motor. 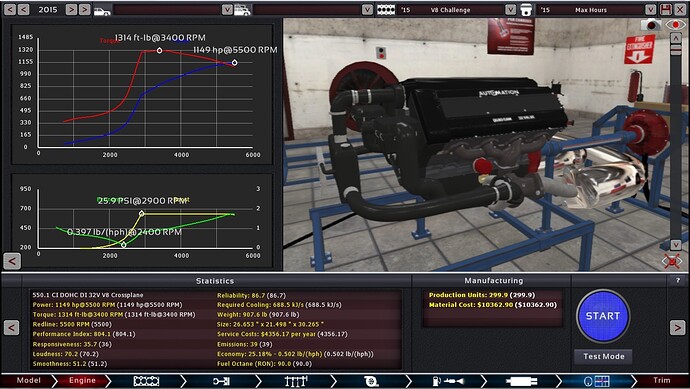 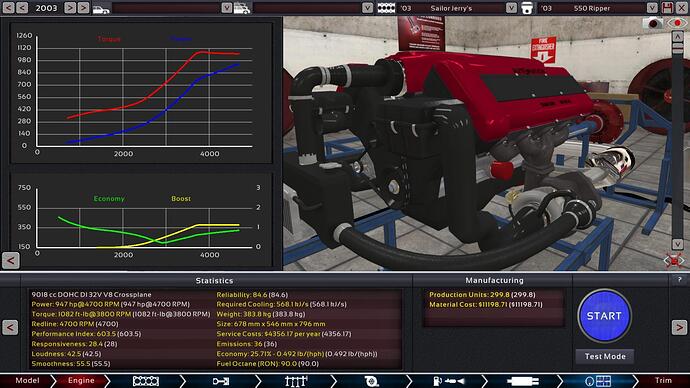 Another version, it seems affordable, but service costs are not the best. 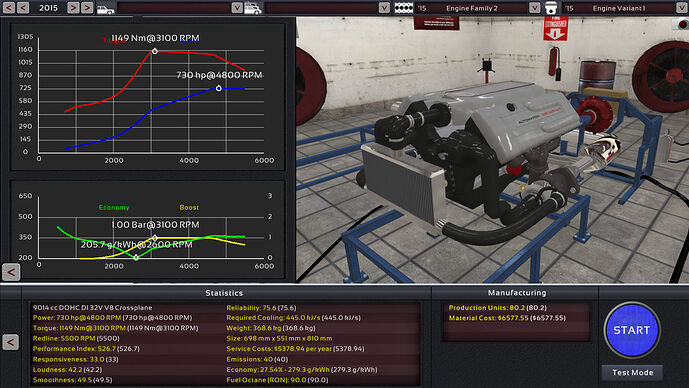