The world was currently in the throes of the largest surge of advancement in science and technology it has ever known. What was once known as the Wild West was now largely tamed and growing more civilized every day. Vast networks of railways and telegraph lines crisscrossed the nation, making large travel distances shorter as time presses on. However, not every town was connected to a railway, and telegraph lines also shared this limitation. Thus horseback and wagon still remained a practical means of conveyance. Stagecoaches in particular proved a useful and flexible means of transport, in this venture our story begins with a man named Norman Ventnor.

Norman Ventnor worked with his father Matthew and older brother Hamish at Ventnor and Son’s Livery in Dodge City, Kansas. A town known for its vibrant history, by 1890 it was mostly a sleepy community. With the cowboys, gamblers, saloon keepers, and brothel owners moving to greener pastures, business dropped off. While Matthew and Hamish were content running the livery stable, Norman felt that expanding their business was the best hope to adapt to the coming changes. A stage line seemed the logical choice since there were still many towns and cities that weren’t accessible by rail. Within a year, Ventnor Stage Lines was a small, but busy network of stations. 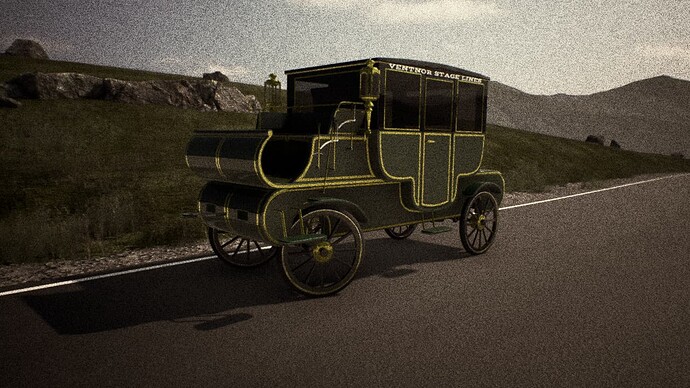 The Traveler was the model stagecoach used by the company. Over the history of the company, around 210 had been built. As word came out about motorized vehicles in Europe, it did not take long for the concept to reach the United States. Using a locally developed four horsepower petrol engine, 25 units were modified as an experiment for this revolutionary new powertrain. Instead of reins, drivers used a tiller to steer while operating a complicated array of levers to control speed and braking. While slow to accelerate, the Traveler was capable of hitting 32 miles per hour on a flat surface. (One was rumored to have reached 52 mph!) The condition of the mostly rural roads used by the Traveler meant that much slower paces were required. The engines were prone to mechanical failure, the brakes were horrifically inadequate when attempting to stop from high speeds, and the requirement of petrol meant limitations on which routes the motorized Traveler could take. As a means of transportation it was easy to call the motorized Traveler a failure, but as a concept, it proved the potential of the internal combustion engine as the wave of the future.

The Traveler received an update in 1903 to include a muffler for the engine much to the relief of passengers who took exception to the noise. With the motor car becoming the wave of the future, Ventnor Motor Company was born in 1904, the motorized and horse drawn Travelers would continue to operate until Ventnor Stage Lines closed down in 1919.

I haven’t heard from Ventnor in a long time, although the nameplate has been around since the Kee era. Anyway, it’s nice to see it return.