The poor little 2013 Chevy Sonic LT turbo that I had has been pushed out of service due to a ridiculously nice end-of-year sale near me. 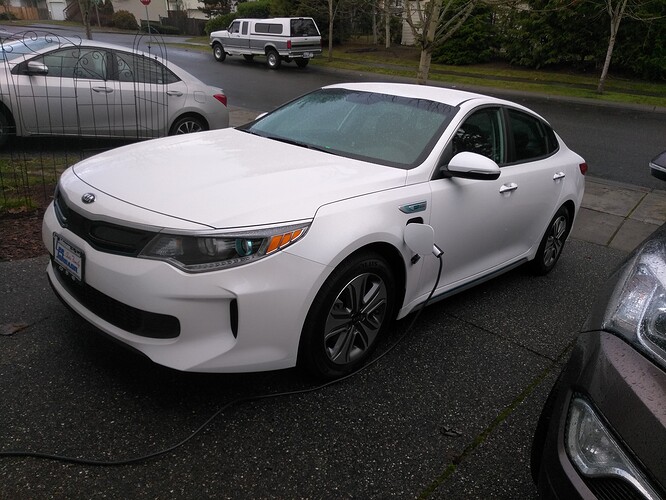 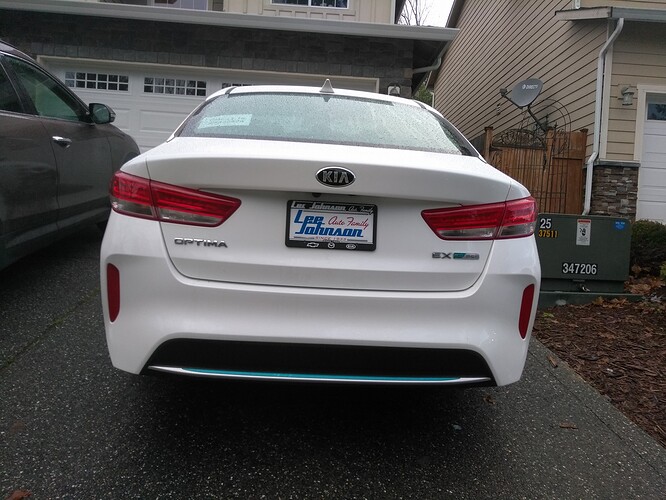 For the past couple years since I started my new job, my wife has actually taken my commuter car, since she has the much longer commute. Well, now she can do the commute to work 100% on battery power. Plus do it with butt-warmers and all those other goodies.

Yeah I’ll join in with noporian here because fuck me that’s a cracking deal and I have a bit of a Kia fetish, so don’t mind me nutting to your car

No seriously, Kia’s styling is on point and it’s pretty nutworthy

Notes from the first morning commute in it:

OK, going from ICE to EV is weird. Like, a car shouldn’t make no noise at all when it’s moving. WHAT SORCERY IS THIS?!

Heated seats work nicely. I didn’t turn on the heated steering wheel because it wasn’t THAT cold, but I know from our Santa Fe that it’s a lovely feature when it gets below freezing.

And based on the charge usage info on my drive, it looks like I could do my entire week’s commute on a single charge (if it weren’t for the fact that my wife will be taking it most of the time for her commute).

Which means that if it WAS exclusively my commuter, based on charge cost for a single charge, it would cost me a whopping $54.60 PER YEAR to run.

Best deal ever, nice one. Optimas are sexy.

I guess then you could say you made the optimal choice

wow, 33% off for the PHEV? man you’re definitely lucky

It was actually technically more than 33%, but who’s counting?

Yes, it says lease, and yes, I’m leasing it. The purchase rebate was only $5000 vs $12k for lease. So it was a no-brainer to lease it and then turn around and buy it at the end of the lease.

Why the rebate though? Is there something fucked with the car?

As far as I can tell, it’s because they build them in small quantities and do not advertise/market them at all. Every review I read on either the Sonata or Optima PHEV, the reviewers really like them overall, minus them being 300 pounds heavier and having a little harsher ride. There were no negative reviews, just some nit-picky points.

If you’re referring to this specific, individual car: nope. It had a whopping 20 miles on it when I took it for a test drive. Still had its door guard foam and all of the protective interior film still installed on the various surfaces. It looked like it had been driven off the trailer, charged, and parked.

I can postulate reasons why the big discount, but I may be talking out of my ass (when am I ever not?)

For anyone interested, here’s where we’re at one week in.

We’ve put on just over 245 miles.
We still have 3/4 tank of gas left.
We’d have more if we didn’t run the climate control, but there’s this thing about being able to see while driving that we like.

62.4 MPG calculated by the onboard computer.
We’ve used about $5 in electricity.

And I’m sure that 2% was put on by the dealership prior to delivery.

Nice, that efficiency is really impressive

It’s been 36 days since we bought the car.

We STILL haven’t filled up.

Soon though… and I can all but guarantee that we will have put more than 1000 miles on the tank. I’ll have stats when it happens.

Gasoline range remaining at first fillup: 53 miles
(Yes, we probably could have squeezed another 100 miles out of the tank if we had tried)

So it costs roughly half as much and takes a third of the amount of fuel to run it as its predecessor.

Impressive numbers, I must say. I am curious to see how this balances out over a year, how long the battery holds up etc.

Wow - that’s really impressive. Coming from cars that barely broke 18mpg, when I got the Honda I thought I was in heaven with between 300 miles on a tank (daily spee…err…commuting) and 500 miles on tank (all highway, down to South Carolina).

It would be a whole different ball game, too, if the car had 2-3 more miles of EV-only range. My wife has a pretty long round-trip commute and her employer doesn’t have a charge station. She runs out of EV-only range roughly 1.5 miles from our house. She also uses the climate controls more than I do (since it’s winter, it has to run the IC engine to heat up water for that.) I get the feeling that spring will bring different, and better, results.

I’ve got a set of Weathertech vent shades that are going on it so we can use more fresh air and less AC to keep the cabin clear of condensation.

So it’s been a while since I updated this thread because, well, it’s a new car. Not much that can really go wacky, and I live a fairly boring life of “eat, sleep, work”.

I do have a couple things of note.

First off is a tale of two companies.

For those who have been around here a long time, you probably know that in 2015, I picked up a brand new “demo”’ unit Chevy Silverado with 4,000 miles on the odometer. As it was considered new (never registered), it had the full warranty. At about 8000 miles, it started burning oil. Significantly. I took it in to the dealer, they couldn’t find anything wrong (WTF?)… so on I drove it for another couple thousand miles, kept burning oil. Took it in again. they put dye in the system. Took it in another 2000 miles later. “'Yeah, ok. We’ve found it’s burning it internally. Its not leaking. But since it’s not burning it fast enough, we’re not going to fix it under warranty.”

So, GM/Chevrolet, apparently, will not repair an engine under warranty for oil consumption unless it is using 1 quart per 1000 miles. My truck was burning it at 1 quart per 3000 miles. This didn’t seem right, so I protested and raised the question. The response? “All new engines burn oil.”

Uhm… WTF? No, no they don’t. The 2013 Chevy Sonic Turbo I also had burned ZERO oil whatsoever, and it had more than twice the mileage on it. Also I’VE HAD SUBARUS WITH 250,000 MILES THAT USED LESS OIL.

I ended up losing my warranty battle with Chevy, so I ended up ditching it and picking up a 3 year old (at the time) CPO Hyundai Santa Fe. Which, in the 18 months and 13k miles I’ve owned it, has leaked or burned exactly ZERO oil (f*** you very much GM).

How does this relate to my new commuter?

About 2 months ago, the Check Engine Light came on, and the car stopped charging. There was a recall for a battery cutoff switch, so we got that taken care of, but it didn’t resolve the issue. The dealer kept the car (and borrowed my charger for a day to make sure it wasn’t the charger), and came back with:

“Your on-board charge port is bad. It would be $2700 outside of warranty. We’re going to get it fixed. We have to do a little paperwork, because the cost of the part requires authorization from Kia, but that’s just a formality.”

3 days later (with a free rental car the entire time, something Chevy never offered), I have my car back, good as new. Oh, and they installed my accessory window deflectors for free for the inconvenience.

I love Kia. Really I do. This is the only major failure I’ve ever had with one, and they jumped right to fixing it, and made sure I was taken care of in the mean time.

Alright… now that the tale of two companies is out of the way, here’s the other update.

(And then my friend, who has been watching me gloat about this car’s mileage, goes out and picks up a used Volt so he can park his GMC Sierra and commute… and just posted his first full tank after getting used to the car, and gets 250+ MPG. Lol… showoff)