Why the turbo size restrictions?

When you try to put a big turbo on a small engine it restricts the compressor and turbine size.

Why not unlimit it and then have other factors like airflow, part longevity, or valve float limit the performance.

In real life, you can get crazy high horsepower out of smaller engines. But you can’t in automation.

First:
the fucking thing is an all-out dragster (most likely BARELY street legal), totally out of the realm of even the most ludicrous realistically built hyper-cars here in Automation.

Second:
there are turbo size limitation for reliability purposes. Having such big turbos (when we don’t even have 21st turbo tech yet) will not only have a powerband as sharp as a mountain, you’re gonna have to rebuild your engine after every run, which is not really practical, is it?

I do get your point about de-restricting turbo size, I personally agree with some of your points. But at this point of time, it’s not really a priority of the devs as of now, as they are working on the Light Campaign part of the game.

I have to second yurimacs, the turbo tech for this game is stuck in the 80’s. Single geometry, single vane turbochargers. My understanding of the physics of how turbos work means that the higher the pressure (which is represented at boost - atmosphere for the pressure ratio) the smaller the efficiency area is. A turbo boost map looks like a topographical map. 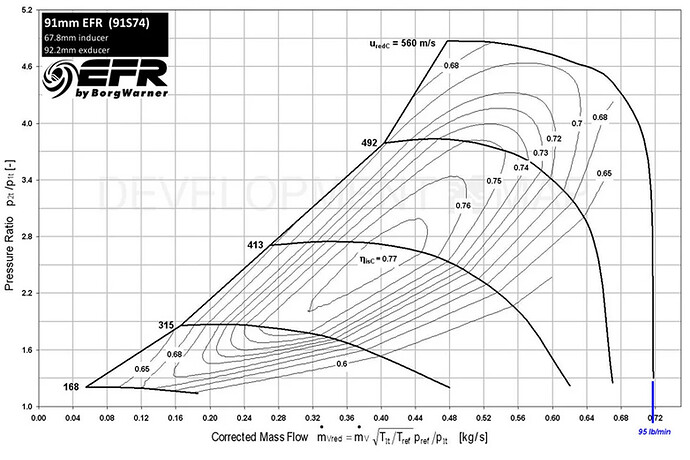 In this example we see the “boost island” ranges from 1.8 to 3.0, or about 8-14 PSIa (here we use PSIa or absolute since atmosphereic air pressure is included when calculating the weight of the air). We then compare this to the mass air flow, or the weight of the air being consumed by the engine. This chart is in KG/s, and 1 cubic meter of air weighs 1.27Kg. A liter of gas is 0.71-0.77 Kg (depending on grade), and fuel + air = power.

Now, why did I turn this into a math lesson? The boost chart here is for an 11 PSI turbo, and you see how small the island is, anything outside the middle area is less than ideal, and the line on the left/top is called the surge line. This is a bad place.

Now lets look at a case study for an non-turbo engine. Burning fuel makes heat, but only about 1/3 of that heat is converted to power. To make 300 HP in an engine you woule need to burn about 91L of fuel per hour. That’s about 68Kg of fuel in the same time. I have yet to mention stoichiometrics, this the the fuel air ratio (in the fuel tab). The ideal ratio is 14.7:1 for gasoline, or around 7% fuel by volume. This can (and should) be adjusted in certain configurations. So to burn 68Kg of fuel, you need to burn 990Kg of air, or about 780 cubic meters.

What does it all mean? If a 2L engine made 185HP then 11Lbs of boost and bigger injectors (to maintain the ratio) will make 300HP at the same RPM. Anything above 6-8 Lbs requres a special bult engine. Boost is not simple.

Obviously there are variables, and a trubo recycles a lot of the heat lost on the exhaust (also roughly 1/3), and none of this takes into acount engine displacement, RPM, or volume efficency, but you get the idea of why massive boost numbers just don’t work. Plus the inertia of a single turbo would make it borederline undriveable. In your example, that car does not have a lockup torque converter, the “staging” at the beginning of the race give the turbo the several seconds it needs to spool up, then the transmission slips to allow the engine to just stay in the very narrow pressure ratio.

Yea, this bit bothers me. The whole game seems to be behind tech.

Even copying exact specs from a real modern car, you cannot get the turbos to spool even close to what they do in real life. At least ball bearing options exist in automation.

Another thing this game sucks about is valve float. Even using 2020 tech, with 4 valves per cylinder I cannot replicate the revs of an LFA engine from 2012. Maybe they need to implement titanium valves.

Heck, I have had trouble making a VQ37 with accurate specs. I was even using 2020 tech and couldn’t replicate and engine from 10 years ago. I had to use direct injection in order to get the game to not knock to death while maintaining accurate power and compression ratios to the actual engine.

All of these are hard to simulate, and have a wide variety of affects on engines depending on a large variety of factors. Overall the game is very detailed, but covers only about half of engine design. Exact replicas, especially of specialty engines, are near impossible. In the mean time however, I find the quality sliders, and imagination method good for remarkably close.

Not to challenge the devs, as the are doing such an amazing job not only making, but balancing the game to make it fun, in depth, and approachable, but I would take the turbo tech being on par with the rest of the engine designer before we get a campaign. There are those who would take the campaign first, and even some who say the designer is too much as is. We all have gripes, but the game exists, works, and is fun. Am I going to complain about things? Absolutely, but there isn’t really anything wrong with the game.

Want me to elaborate?

The issue is you are wrong and being a jerk in the process.

The game has a sandbox mode for a reason. The sandbox is supposed to be where you can create any car you can imagine without any boundaries such as making the car sell well. If you want to have boundaries, thats what career mode is for.

So why are there turbo boundaries in the sandbox?

I’m with you there. I haven’t played much campaign.

Virtually ALL I do is design cars, export them, test in BeamNG, tweak in automation, export, repeat until l am bored.

The game has a sandbox mode for a reason. The sandbox is supposed to be where you can create any car you can imagine without any boundaries such as making the car sell well.

ehhhh not really, even though the sandbox is for doing whatever, the game’s core mechanics themselves are solely focused on production cars, and there is no current plans for making the car designer friendlier towards race builds.

And as for turbo tech being behind, well, as we speak the devs are working on forced induction re-write so that issue will be fixed soon™

I explained turbos in math because the game generates engine stats based on math. Lots of muitplying decimal numbers, and when you start multiplying big numbers, you start getting really big numbers. Computers don’t like really big floating decimals. The limits are for your safety, and the same simulation is used in campaign as sand box, so the limits are set for the games purpose.

Case study, multiply c by h
Do note, I am being sarcastic, c is lightspeed, and h is the Planck constant, the result be be (literally) astronomical.

In short, what @balkanski_brat said.

With the overhaul of forced induction, I can hope for superchargers then or shortly after hopefully.

Another thing I would like is to chose between 1 turbo, twin sequential turbos, or twin parallel turbos for v engines.

Not sure why we can’t use 1 turbo on v engines now.

Good thing, superchargers are in fact coming for the re-write. And V & boxer engines will receive single turbo layouts, don’t know if quad turbos will be done as well. I believe sequential turbos may also be a possibility, right now we already have parallel twin turbo setups for V/boxer engines, but those should be coming to inline engines as well.

Now my hellcat wont be supercharged. I have a great charger hellcat replica made.