That and this much I’ll say for now, Wiler motor company is based in America, has been functioning in some capacity since the 1960s (although the founders themselves had been in some working capacity since the 30s and 40s) and their primary means of business is building engines for racing, although it is not out of the question they will build engines meant for road cars, and eventually take on to building their own cars.

Apart from that…it’s a work in progress.

Now for engines, lets start off with some engines for a few prototype racing sports cars, specifically LMP2 and the Daytona Prototype. 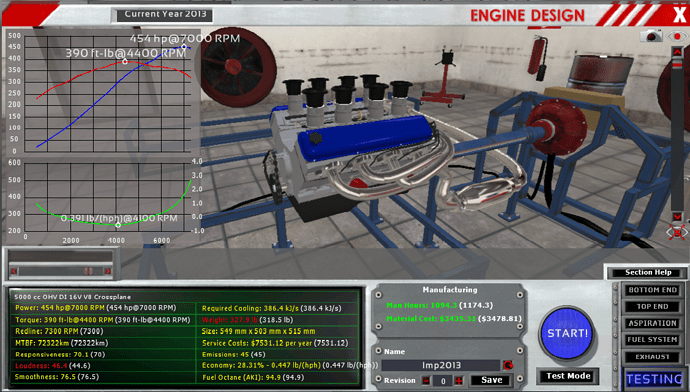 This being based around the 24 hour engine challenge in scenario mode (although I’ve yet to exactly pass that yet…), my approach was a 5 liter Pushrod direct injected motor, trying to go for a compromise of bore and stroke.

I usually go with pushrods given potential to be lighter and to take up far less physical space compared to a motor with an overhead camshaft design, although that is not to say I’m beyond or can’t build a camshaft motor, I can.

I’m aware that scenario rules play very differently than sandbox (so much so given how the Trans-am option allows some things that aren’t available in sandbox compared to scenario), but regardless, tried to build and model a car close to competition rules more than what’s actually stated for FIA LMP2 engines.

I’m kinda proud although until I can average gold in the scenario mode…even with all my time messing around with V8s, I’ve still got ways to go.

I’m sure there is room for improvement.

I’ve got two DP motors, and doing a bit of both going off the LMP2 engine as a start, but also trying to fit it within 2014 DP based rules best I could. I still tried to keep the economy somewhere close to the LMP2 even with a larger motor pushing out more power.

Keep in mind though that like before, there is room for more power, but one limitation is compression ratio, and I did try to make as much power as I could within that compression ratio while keeping maximum fuel economy and responsiveness. 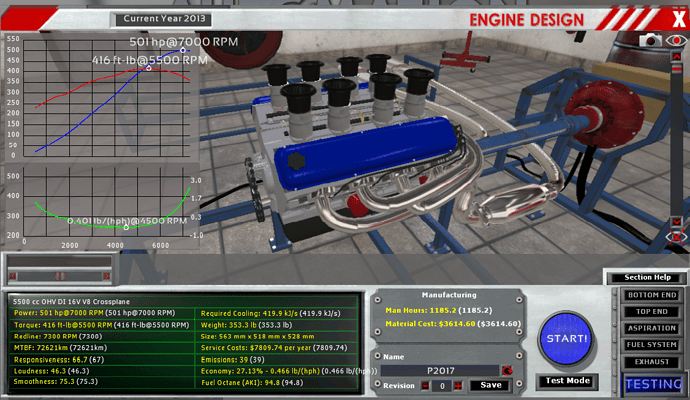 DP Motor 2 is meant to push to the max the allotted bore for a DP engine, while still keeping it at or under 5.5 liters, and so we have this more powerful engine with not much a change apart from economy, size, and so forth.

One reason why I’ve let the RPM go a bit further past max power for all these motors is to give a driver a bit more room for shifting other than only being able to do so once the engine reaches max power. Keep in mind like LMP2, VVT/VVL is not allowed either, but well…I’m okay with these engines but naturally, I am looking for ways to make them better.

It’s also why the DP motors have 2017, since I’m trying to come up with potential engine ideas for a hopeful future prototype that could be a combination of LMP2 and DP…who knows.

I’m afraid to ask what others here think of Daytona Prototypes, some love them…some loathe them for reasons. But that’s a ramble for another thread. 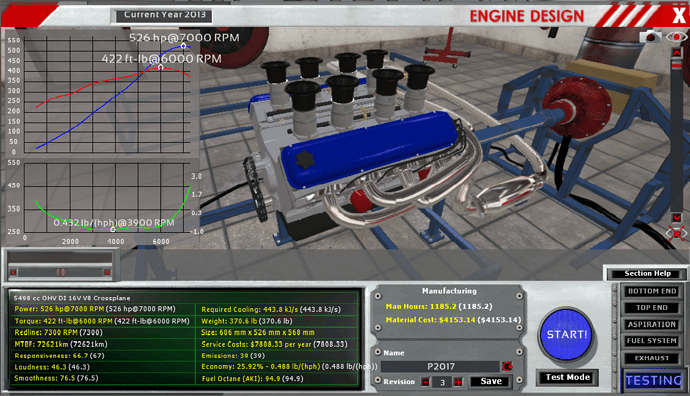 
that’s all I can put on for now far as attachments go, so, any thoughts so far?

At a quick glance I think they are solid motors with strong power bands all the way to redline. The only issue I have is the Man Hours. I understand these are performance motors and extra time is needed to manufacture these, however lets break it down a bit here.

All calculations were done assuming an 8 hour work day. Now factor in the wages of all the people you need to pay to create this engine. A high performance motor requires very skilled engineers, builders, tuners ect. Lets average their hourly wages at $45/hr which comes out to around 94k per year in salary, seems reasonable to me.

Please don’t take my above comments in a negative manner. I feel like a lot of people abuse the quality sliders and don’t realize how much money it would actually cost in the long run. I challenge you to make a comparable engine with all quality sliders set to 0, then tweak from there. I think for a high performance engine around 200-250 man hours would be more than acceptable as they would not be mass produced. When I get home tonight ill give that scenario a go. Did you make the rules yourself, or is it one that’s available in game?

Try to not use the quality sliders, or at least keep them to a minimum.

Another piece of advice I can give you is to extend the redline slightly, this means you can have more usable power after a gear change. Because as it is right now, the moment you get to use all that power, you have to change gear, at which point you lose all the power.

Another piece of advice I can give you is to extend the redline slightly, this means you can have more usable power after a gear change. Because as it is right now, the moment you get to use all that power, you have to change gear, at which point you lose all the power.

I agree, that engine should be able to handle at least a few hundred more rpm before the MTBF take a hit.

The comments to an extent are apprecieated and it’s alright.

I suppose for what engines I’ve put out so far here it would not be an unfair assestment that I say, used the quality sliders without fully comprehending the obvious tradeoffs of quality to work ours.

When making these engines, I was lookin more into every other parameter sans the man hours, which I at least found interesting was an omission in a lot of the scenarios.

I’m otherwise more than aware of …yes how long and how costly some of these engines would be, a least in so far as translating them direclty from automation to RL.

Also in irony…specically in regards to starting the sliders at 0 because I did actually start off that way before adjusting them, although one I could not quite ignore was that with the top end. Partially becuase yes…they’re pushrod top ends.

I’m aware that a tradeoff for weight, less physical space and so on for a pushrod brings a list of other issues, including how again they on average are unable to rev as high as an overhead engine less some changes are made and even so, it can be on a knife edge of functionality.

To say nothing of air flow, friction and so forth. Maybe it’s partially because I’m a bit an OHV fan, largely thanks to the corvette (even thoug one of my all time favoite models, the c4 ZR-1 had a DOHC motor who’s only real relation to past or current motors is displacement…never mind it’s all but a completely different motor compared to engines before it), but at least where it can be helped, I do have a tendency to subbornly try to make an OHV design work.

Not to mention like stated before, Sandbox and scenario roles play differently, I mean am I the only one that has taken notice how with the Trans-am scenario, aluminum alloys and fuel injections are an option but neither exist in the sandbox mode?

Regardless, I did actually build the Daytona prototype motors as close to what I could, without abusing the slider… and then I decided to then see how far I could actually push things. I’m too aware that these motors are monstrously expensive, they would only be useful in the long run if they were say, primarly motors for LONG term use over a matter of years (and at best maintained only when required, it would decrease what engines could be used over a season but that would be largely due to it’s costs to begin with).

Though I have actually put together a motor with FAR less hours into it, even if it’s short of economy and responsivness (again making compromises).

That and I actually did extend the RPMs before, but a few more and some parts were going into yellow and orange. Granted I could strech things but I guess in tying a bit with would be worth ethic, I want parts to be operating as close to around when things would start to fail, but not beyond that.

Plus trying to extend the redlines further did reduce MTBF.

That said…here is such a motor that’s far more reasonable. I’ll probably try to find ways to cut corners even furhter. 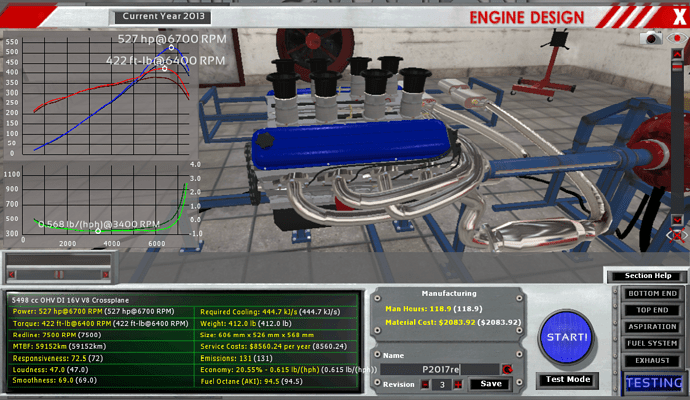 And thanks to to the attachment limit, here’s two more engines for now.

This based on he WTCC challenge for the I6 (win on sunday, sell on monday), I had initially tackled the scenario and came up short, so I went back to practice in sandbox before taking the exact steps taken in sandbox into scenario. The final motor I’m still trying to get to gold, but what is seen here is more or less the same engine apart from some changes in displacement.

I took a page out of the actual Super 2000 rules and far as I know, the maximum redline for a six cylinder motor is 9000 rpm, not to mention VVT/VVL is not allowed, although the latter was a non option given I used 5v per cylinder with the DOHC setup. 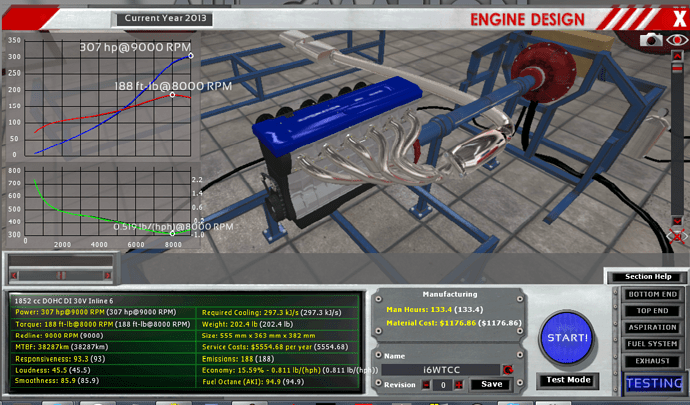 Lastly…here’s a WRC project motor, that’s a bit more personal, and a pipe dream that while unlikely if not outright impossible…I could at least maybe pitch.

That unlikely idea being Chevrolet entering the WRC much like how they technically were in the World Touring car championship for some time (although to get down to it, it was largely if not entirely thanks to RML but that’s a ramble for another time and that’s besides my point here), and while I’m still in the process of figuring out design concepts for the rally car in question

The base car in question for my project is a Chevy Sonic, and as of now, been trying to work a WRC motor even though for all I know, there’s plenty tools current WRC teams use that isn’t remotely available in automation.

I got cracking none the less, and again, work in progress.

Based around the medium gasoline engine from Opel, this was picked as it’s a successor to the GM family 1 engine. I figured if say…even if rules did not require road going examples, at the least I could use this engine not just as a basis for a rally machine, but maybe make road legal variants in limited numbers with an engine that had had direct influence from the rally program.

Plus, it’s direct injected by default and while I could have gone with 5 valves per cylinder, I’m going to see how far I can push things on just 4 valves.

I’m more than aware that I can technically extract FAR more horsepower from this, although I’m trying to aim for both power as close as I can to the legal ‘limit’ of 300 (even though the WRC website, the VW is listed as having 315bhp), without the need for restrictors, and again with a bore and stroke that’s quite different from the competition. Not to mention unless I’m mistaken, you can’t put air-intake restrictors anyway.

IF I could…that would make things potentially more interesting as I could find ways to get what torque I can at as low RPMs so long as I meet other parameters such as fuel consumption and responsivness. 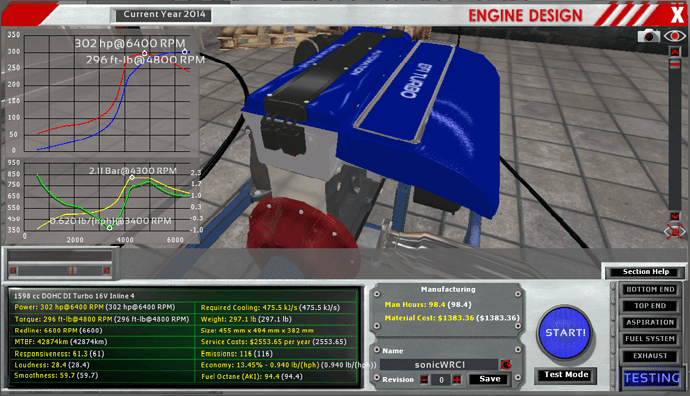 So yeah…any thoughts on these motors?

Yes, I read about your views regarding the motor and I completely agree with you. Can you please tell me about the efficiency of Reliance electric motor ?

7 year old thread, 5 years since OP was on the forums, I would not have much of an hope for an answer.