Welp, since I’ve posted in Discord and it would be some side dish.
I’d like to introduce my 92 Honda Civic EG (Sedan)

not that VTAK kicked in yo, but soon™ 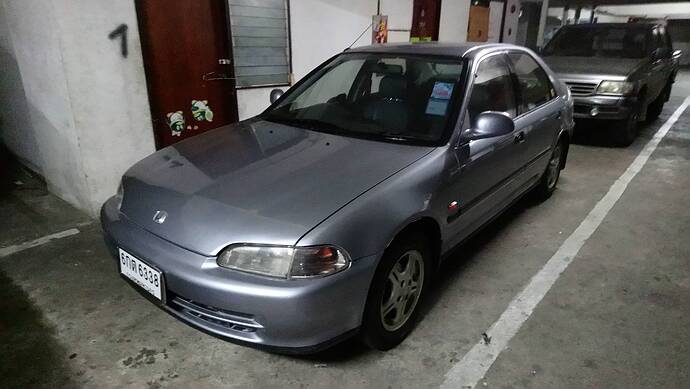 First of all I’ve driven many cars, from large V8 muscle car (my dad’s '73 Pontiac Firebird TransAM which I took it for joy ride), rare and wild car like Volvo 240 GLT Turbo, and some N/A cars, but this is quite a bit special to me.

Before buying this, I was driving my 02 7th gen Civic (ES) with leasing plan for 5 years, but major financial crisis hit me so hard and I’ve decided to terminate the leasing plan, despite of having just another 2 years left. (I’d not suggest leasing second hand car, the interest rates are too high)

But, there’s rainbow after the storm, I’ve got huge paycheck which I can buy another car in cash (within very tight budget)
For all I’ve search for, the EG wasn’t my first choice as too many were “riced”, and I was looking for AE92 Corolla GTi (yeah, in Thailand the GTi was equipped with 4AGE “Red Top”)

But… at that time, my bookmarked Corolla GTi was gone, so I’ve look elsewhere until I’ve founded this EG on the sale for cheap!
I’ve forgot to take the picture when I’ve seen the car for the first time, but the paint condition was not that good, even I’ve tried to use the buffing compound it would not help that much.
But this car catches my eyes for two reasons. Stock condition (all factory installed, no modification) and Manual transmission, in which very rare to see something this nice.
So I’ve negotiated with the previous owner, and took for a test drive which ended up with the deal for 52,000 THB (1680 USD) with a rare JDM windows (as you can see the brownish side windows) to me.

There is a catch, I’d not consider “Bangkok” lincense plate in the selection as most of them are “riced” (I can’t blame, it’s a nice car and has tons of aftermarket parts), but this one is carried with rural license plate which owned by a nice lady before being sold to previous owner, who prefer keeping it stock. 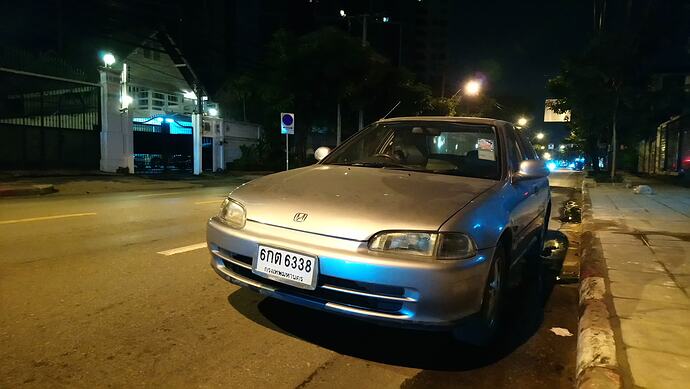 Now, this little EG comes to my hands. And first thing to be notice, the painting needs some TLC. I’ve paid a bit for respray which gave the nicer looks. The headlining was sagging that bad, I’ve sent to upholstery (but if you notice there is some “sagging” on the leading edge to the windshield, I’ll figure the way to fix that)

Apart from the body works, the engine just only needs some refreshments, a new semi synthetic oil, new spark plugs, battery, clutch that’s it! And this guy is pulling stong.

There are many things to be done with this (brake upgrade, suspension, rims (I need VTi 5 spokes)

if it were to be painted red, would it immediately ram the car in front?
(Shingo Shoji stuff)

sorry… had to do it

Nice car, my brother got a VTI ferio (EG9) a few years ago, this car was very cool, I regret so hard he sold it

if it were to be painted red, would it immediately ram the car in front?

At first there was red EG on sale (my favourite colour), but it was sold.

Legend has it that if you say “Cool Vibrations” in your rear view mirror 3 times, Shingo will appear and bump you.

And as a former EG owner myself, they’re very fun cars.

Welcome to the Automation Honda Owners Club (or rather, welcome back

), that is a really nice example you’ve managed to get your hands on. Happy driving!

Indeed!™ Congrats on the purchase & good luck with it!

Just a bit update and some more inspiration

Couple days ago, my car sputtered and died on the highway. Luckily I’ve got some people tow me (yeah, oppotunist guys made me paid for 2500 THB, that’s worth for 2 gas tanks) to my dad’s garage for fixing.

Turned out, my fuel pump is dead along with faulty distributor coil. Those are from the factory since '96, good job and well done for their service.

As this car is turning to 3rd year of ownership in next year (actually, March of next year), I need to refresh and doing some upgrade (and for some future proofing) for things to come.

Here is my inspiration… 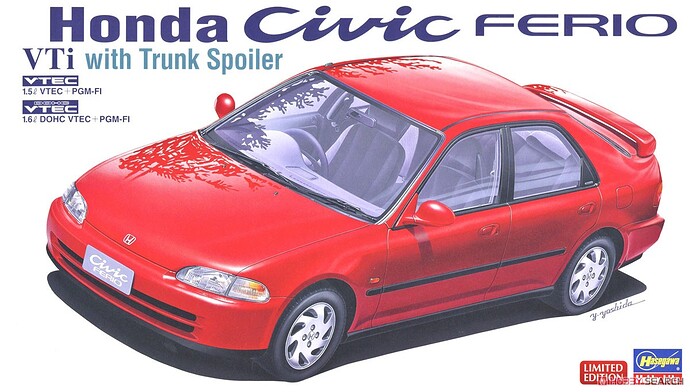 Yeah, JDM VTI Spec is much more affordable for me which I can focus more on mechanics like suspension, brakes, tires and engine.
But after research, UK’s VTi’s spec is also 1.6L (with B16A) which is nice and I like that.

There are things that I’ve shortlisted to do/buy.

Welp, that’s looooooong way to go for me… and I’d better have tons of savings.

I plan of buying another EG shell for some EV conversion as well, perhaps in next 2 years.

Got some a bit update, (perhaps some help is nice)

My car is running too rich, as the spark plugs are covered in carbon deposits (yikes). 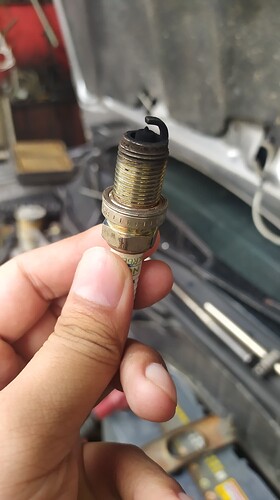 Currently, replacing the fuel filter, check the injectors.
But the most annoying thing is… 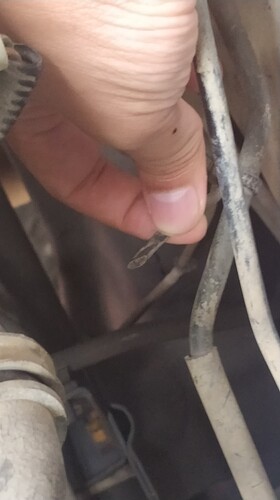 This is cut O2 sensor (downstream one), this is very bad and my dad and I founded out this, which annoying for finding the plug that meant to be plugged in. (whoever did this deserve F-bomb from me for life!)

Also, better replace some 15" rims and fresh tires. Currently, I’m running on stock 14" and it is quite old tires now, this is for the safety purpose.

That’s all I can do since a friend of mine really want this car, and I’ve decided to sell it to him in next year after I’ve got a replacement car.
And the replacement is… Volvo 850 Turbo
(damn… I’m back to turbo brick again, after for 10+ years since my old 240 turbo)

That ought to be a step up from an EG Civic - and although it’s not an 850 R, it could still make you feel like BTCC ace Rickard Rydell in spirited driving.

As a Swede, I can’t stop wondering how common (or rare) Volvos are in Thailand?

Depends on what model, but I used to have rare 240 Turbo (in Thailand used to have Turbo R-Sport which is not genuine B23FT or even rarer B21FT)
But for 850R, we have very few of them, the estate one is even rarer (the yellow one is the rarest one).

I know R-Sport sold a kit to retrofit turbo on the B23A carburetor engine, is it something similar you are talking about?

exactly!
still rare, but I had the genuine Turbo one, lol

Slight update…
Unfortunately, I didn’t buy the 850 Turbo as it goes like a hot cake (and the maintenance cost too) also I have the family now, as going to marry with my girlfriend by X’mas.

When considered about my EG that need the proper maintenance / restoration while I’ll have to race to get the necessary parts (as they are on the rising, due to high demand), also my soon to be wife is going to learn how to drive very soon, that’s right my EG isn’t suited to current situation. (I’d prefer letting her drive in automatic rather with the stick, that’d be less stressful for her)

So… here’s my replacement (I’m not gonna sell my EG very soon, she just need TLC to be pretty again). 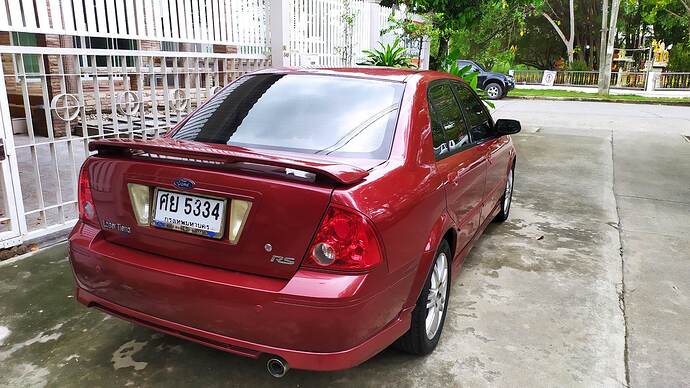 Wait a sec’… as fast Ford? Am I crazy?
I’m not crazy, this Ford is badged engineering with Mazda 323 Protege (BJ type). All mechanical stuff is shared with Mazda 323 (cheap to run!) and comes with Automatic transmission.

Hold on, an automatic? How the hell is this car supposed to be called “Fast Ford” ?

This car is no slouch, 2.0 liter engine with 140 HPs in the lightweight chassis. It would be slower if you compared with the USDM (cough Callaway) 323 Protege, that’s factory turbocharged version.

This car ticks all my boxes, an ABS + Airbag (not Takata one), Automatic, Foldable rear seats (60:40), and cheap to run.
(clearly opposite to my EG)

Once I’ve transferred the title, I’ll send this car for preventive maintenance. As I’ve detected something that required such as Automatic gearbox’s fluid change, and wheel alignment.

Sorry for not having much picture, as it was cloudy and raining after I took the exterior shot. 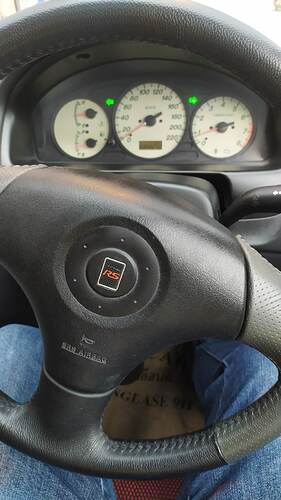 Not gonna lie, when I read the topic I thought that you misspelled things and that I was going to see a Sierra

Interesting to see cars from other markets that you didn’t know existed.

I’ve just make some joke with my friend…

“So you want a Ford Sierra RS?”
“Yes”
“We’ve got a Sierra RS at home”
points towards Ford Tierra RS

I think it was named after Tierra del Fuego - the southernmost part of South America. That said, such a name would be more fitting for a truck, SUV or 4x4.