The Kamata GTR will end production next month, creating a limited production run of the last 100 models.

Official designs for the 2018 facelifts of specific models have been completed, and will be shown via teasers until the next auto show. 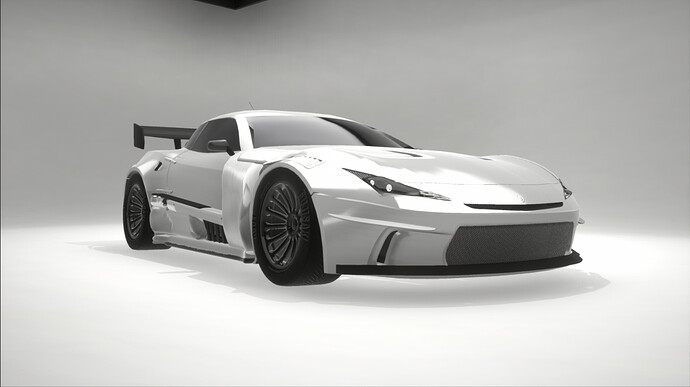 The Super GT weighs 1195 kg and makes ~600 HP from a custom-built 2.0L turbocharged I4, transferring the power to the rear wheels via 6-Speed Sequential Manual gearbox. 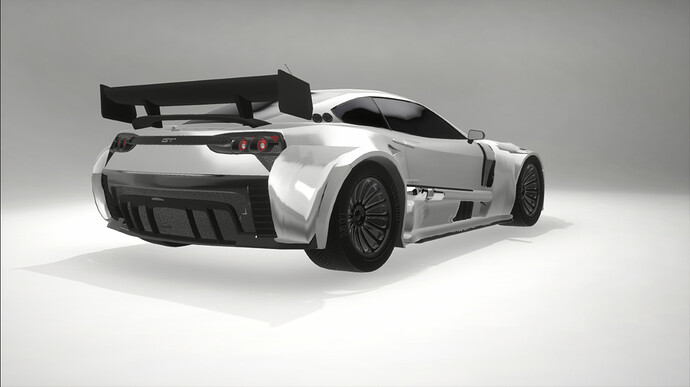 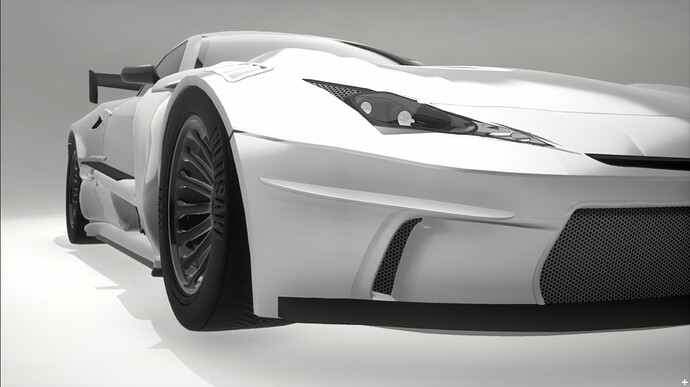 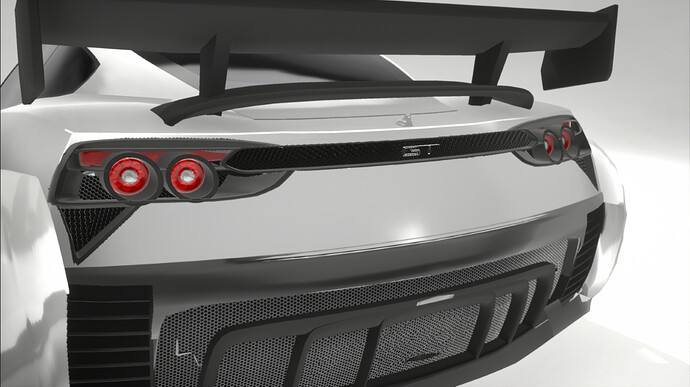 Zenshi has reported that the design of the Next-Generation GT will be based off the Super GT.

If the next street-legal Zenshi GT looks even half as good as the racer, I’ll take it.

Ok… THOSE taillights. NIIIICE. Also that’s some clever fixture work on the car as a whole

Zenshi publicly released promotional photos for the 1976 “Okiru” GT, using the GT BBR, a special version of the GT that was based off a model featured in a hit crime film. 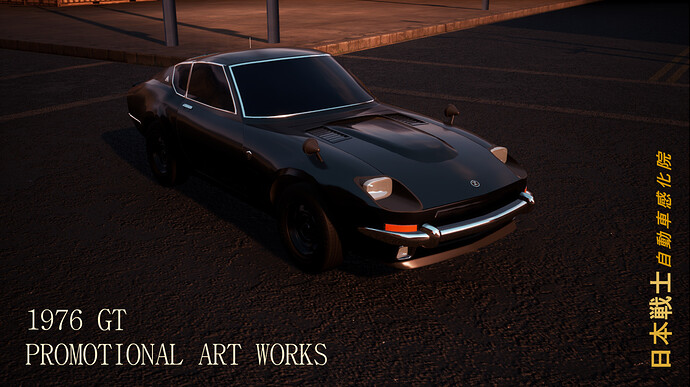 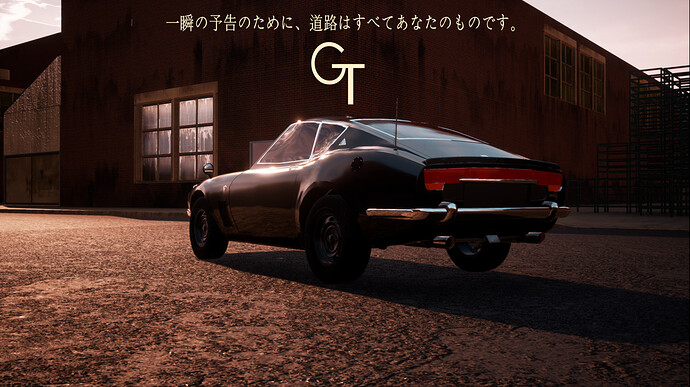 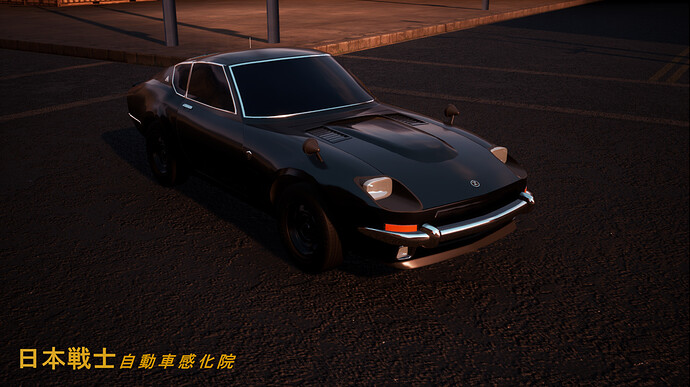 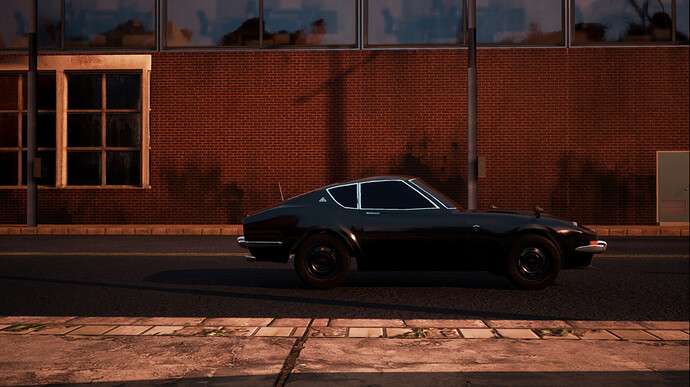 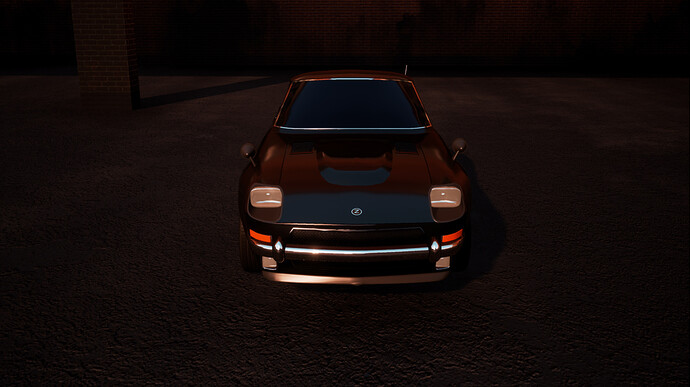 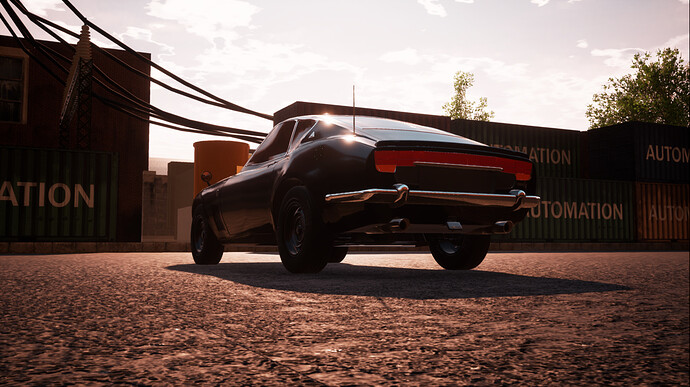 It’s like a lovechild between a 240Z and an ambiguous muscle car, and I have to say, I dig it! The front is strong, attractive, it manages to blend sharp, squared features with a sleek body in a way that looks authentic. It’s nothing extravagant, it’s not “overly” styled. But what I really like, is the rear end of the car: The massive light bar that curves so subtly with the trunk, and the source of the muscle car vibes for me. The car manages yet again to look authentic to me, it’s just simple, and pretty, simply pretty!

I’m personally interested in the engine options, as well as the interior accommodations!

Stay tuned for a museum entry on this generation of GT!

The 1st generation Zenshi GT made its appearance in 1968 as Zenshi’s first major racing machine, which then became their first mass-produced 2+2 sports car. It was known for being a car made in Japan that possessed qualities from both the east and the west, having an optional V8 engine powering the rear wheels of the lightweight car. 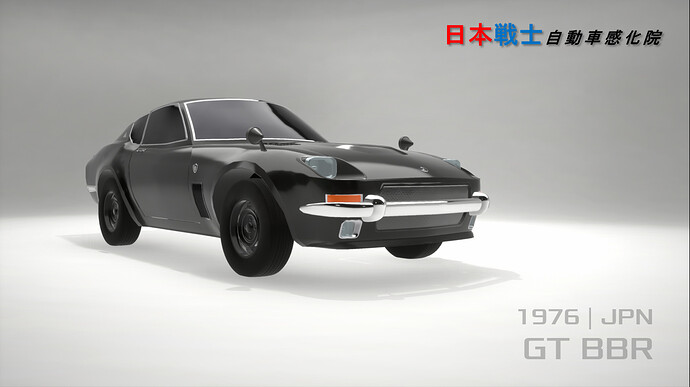 In 1975, the GT underwent a major facelift, which is known as the “Okiru” facelift (meaning “Get Up” in Japanese), due to the drowsy look the fixed headlights gave on the front. The facelift fixed the problems prominent with the earlier models, but was more or less the same compared to the older models. The base 2.0L LW1 I6, however, was replaced by the newly developed LW2 2.3L I6, an engine shared by the Zenshi Luris and Grandea. 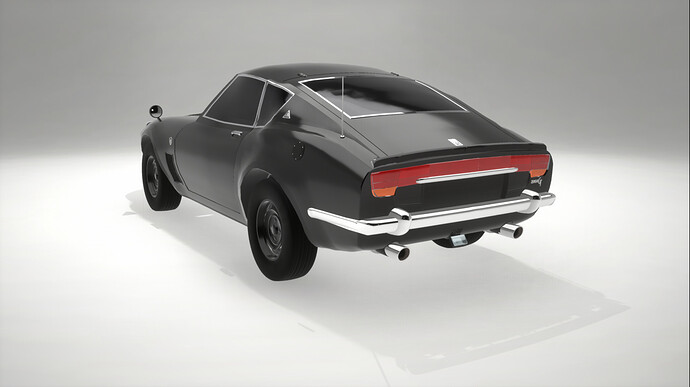 In 1976, the GT was featured as the main character’s car in a hit crime film, known as Chaser, a movie that can be inferred as “the Japanese interpretation of Dirty Harry,” where the GT was given an ample amount of screen time in a hectic car chase scene. a month later, Zenshi released a special edition GT based off the model featured in Chaser known as the BBR (Black Brazen Racer), the trim name referencing how the car was described in the film. The car was given a deep black coat of paint, Griffin emblems on the side, and on the inside; rich brown leather upholstery, and a wooden steering wheel and shift knob to top it all off. 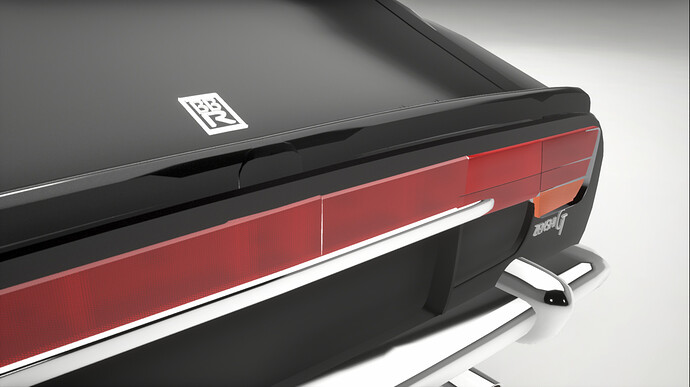 The BBR wasn’t just an appearance package, however. One major component of the BBR that made it stand out from the regular GT was the engine: In place of the 193 HP 4.1L TY41 V8 engine, was a newly developed TZ40 4.0L V8, which was lighter and more powerful, cranking out 207 HP to the rear wheels. The suspension was refined for sharper handling, and the twin exhausts were given a refresh, courtesy of ZMD. 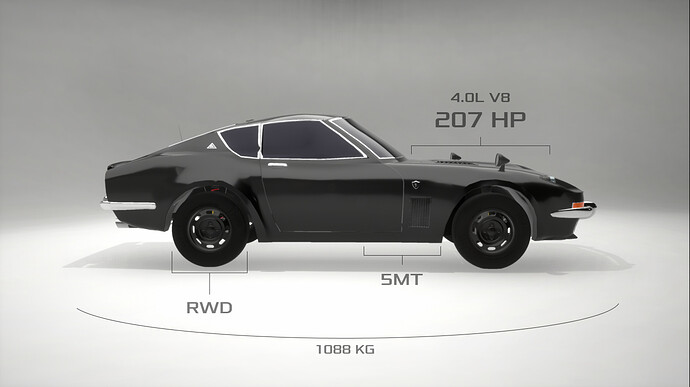 The BBR was, if anything, a precursor to the GTZ, being a “higher” high-performance model than the standard GT V8, but was considerably rare during the time of its sales due to being highly limited in production; only 120 were made in 1976, 80 in 1977, and only 36 in 1978. The legend lived on to spawn in newer Chaser spin-offs, using the exact same model until the rise of the XRZ42 in 1980.

Facelift looks well developed and realistic in terms of lore. Nice. Keep it up

Looks nice. But generic. a bit too generic

a bit too generic

I beg to differ - and if this updated Zenshi GT is any indication, the company has made one of the smoothest transitions to UE4 yet. Quite a realistic facelift too.

Tbf they have. . not saying that all theyre cars are genric. but the gt is. why you may ask. It uses one of the most boring bodies. but tbf they used it very nicely

Why is this body boring?

This particular car doesn’t. It looks different and fresh 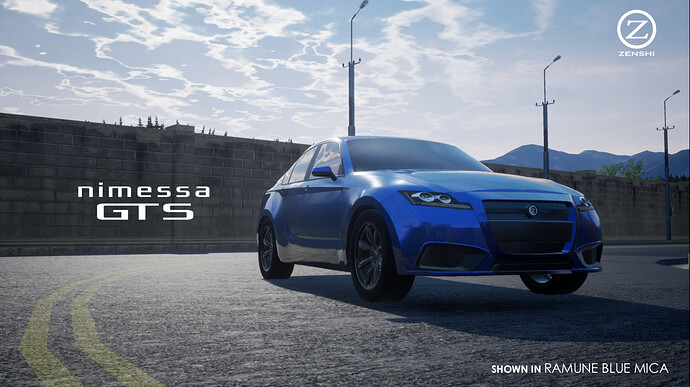 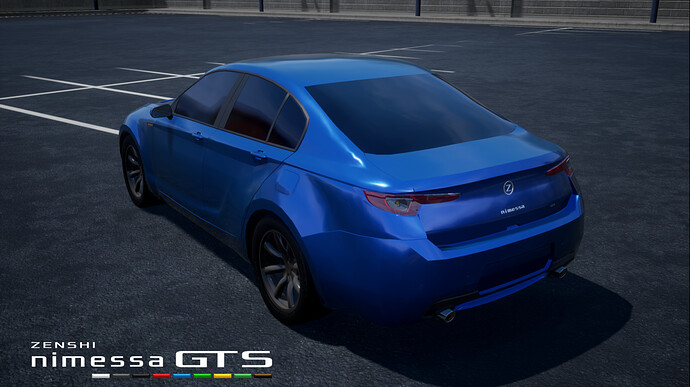 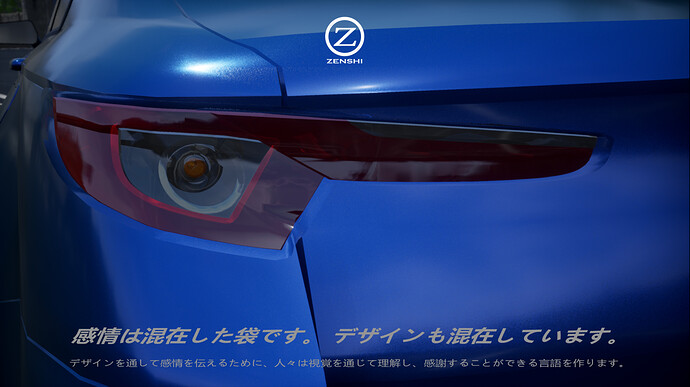 Emotion is a mixed bag. Design can be a mixed bag as well.
To convey emotion through design creates a language people can understand and appreciate through vision.

It’s too late for LA and too soon for Detroit, but I don’t care because that thing looks ace! I like how you inserted the full list of available exterior colors on one page of the brochure for this latest Nimessa.