This is a pre-emptive one, as I don’t pick it up until the weekend, but in the words of the Doge - much excite. 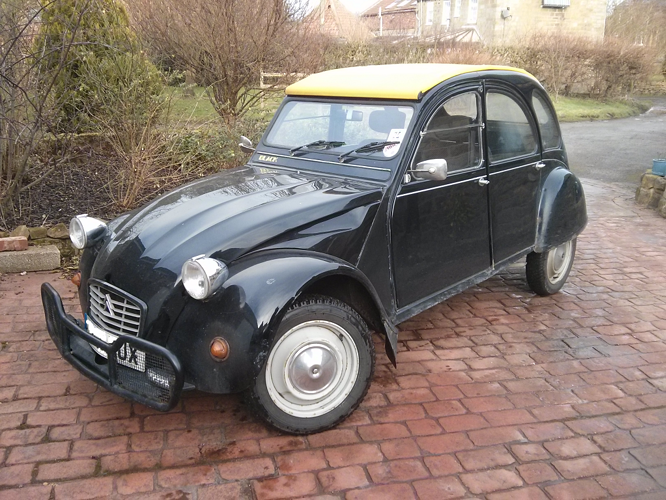 The car is quite rare being painted in black from the factory. Only a small number were made for continental Europe, but the actual spec of the cars are exactly the same.

A previous owner has started to make some modifications to take this to the “high” spec Club/Charleston, adding such luxuries as plastic door handles instead of straps, and an interior light.

To complete the change over, it still has the Spécial steering wheel and dash, so I’m hoping to switch these over to the single spoke wheel and posher bigger dashboard at some point.

This is the current setup:

And I’m aiming for this:

As you can see, it also has some of the Adventure kit fitted, being the bigger bumpers. I might look for the rest of the kit in time, but I quite like it with just the bumpers for now. I think it would look quite good with a snorkel and some spotlights, no?

Oh, and it has a side exit exhaust.

To begin with, I’ll just be servicing it, giving it a damn good clean, touching up the odd bits of rust and just enjoying it. Longer term I’m toying with the idea of converting it to fuel injection and computer controlled electronic ignition, but we will see how that goes. It’s not perfect body wise, but then I won’t feel so bad using it in the British weather a bit, and the engine is one of the sweetest running I have heard.

this is a real nice car. I like it. Would never buy it by myself, because on german autobahn you get pushed aside by the trucks, when you drive maximum speed 70km/h

So does Spécial mean especially basic then?

Joking aside, congrats on an awesome little car, unless you want go offroading I would pass on a snorkel though

I might try some greenlaning at some point, but nothing that actually needs a snorkel.

And Weasel, official top speed is about 115km/h.

They will go faster, but you rapidly begin to approach that point where it sounds like the pistons might be happier on the outside of the engine. If you come across a hill or the wind is blowing the wrong way, you have no chance anyway.

My first car was (actually it was my father’s car, but nevermind that…

It has basically the same engine as your 2CV, but I think it had a bit more power…
Anyway, I rode it on the motorway, and suddenly I heard a bang from under the car… I pulled over, and looked under the car and the whole floor and was rotten away

(I have no idea what that bang was)
I did restore it, and rode it for a few months after that, and then I sold it…

Yeah, the Ami has the same engine but with about 33hp, courtesy of the “supercharger pipe,” really just a cardboard tube from the fan to the intake, along with a higher compression ratio. 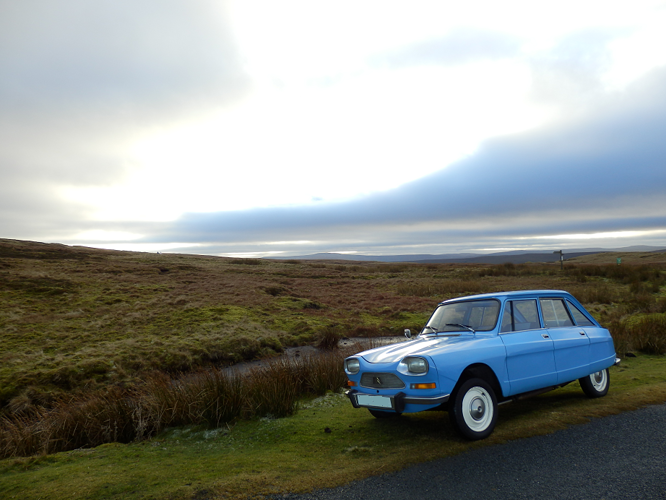 But again, it’s not a fast car, the highest speed I achieved was 130 km/h, at that speed the car vibrates like my grandmothers chair, and it feels like the engine is going to explode…

This is magnificent Adam. I really like these old Lemons (because that’s what they pretty much translate to in dutch

Well, got it back home on Saturday morning. It was pretty desperate for a service, so did that Saturday afternoon, then started cleaning yesterday. The Paint and Chrome is starting to come up nice with a clean.

Fixed a few things today. Put some Kurust on a couple of places to test before paint, that stuff is magic, seriously.

Accelerator pump on the carb was seized, so it always stumbled when pulling away. That’s sorted now, along with the heater being stuck on full heat. Fortunately it has been pretty cold recently.

Not to leave this out of today’s work, after a bit of testing last week I found a few issues. It pinks/knocks under hard load, so the timing is a bit out. When warm it starts to run badly, the coil seems to get overly warm. Rear shock absorbers seem to have a problem with their travel, and they don’t go as far as they should. The brakes judder when hot. The sort of stuff you would expect of an old car, really.

ll this meant I had to order quite a few bits, which came in a nice shiny box today. It was getting cold after I was out with the Prius, but I did squeeze in some time to fit the new resin filled ignition coil. 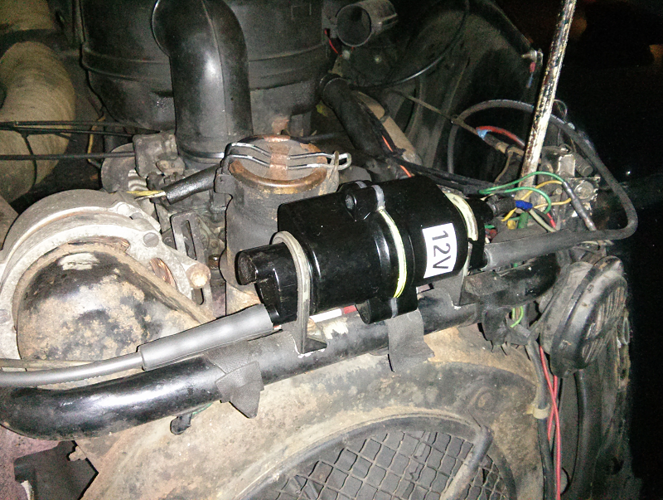 Well, since the last post, I have done a fair bit of work on the car but seemingly got nowhere until yesterday.

The knocking under load was easily sorted, I had timing that was about 50% extra advanced over where it should have been. Cleaned up the points and reset that, but it looks as if the condensor is failing, there is quite a bit of sparking. I ordered a new condensor already, but on the plus side, I managed to find what is probably a period 80s points assist ignition system when I was clearing out the garage:

(Not my picture, but the same unit) 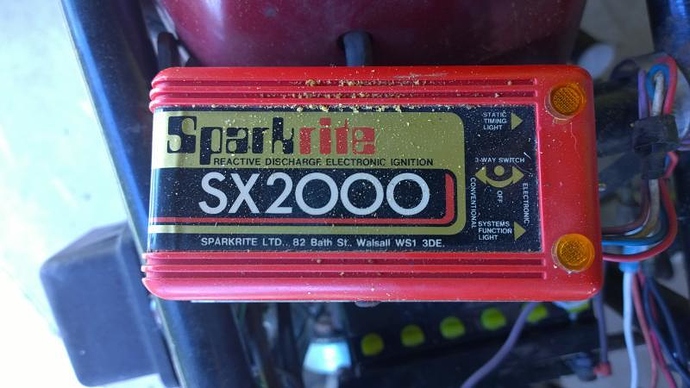 Assuming that works it will definitely be fitted, as the quality of modern condensors is notoriously poor.

Next unscheduled problem was carburettor related. As standard, the Solex in the 2CV was fitted with a 102 size primary jet. This was quite small, fitted by Citroen in order to lower emissions. On modern unleaded petrol, this tends to make the engine run a bit too lean, and causes a weakness at the peak of the first choke. This means you get a flat spot between the two chokes as they changeover.

The recommended modern fix for this is to fit a 107 jet, so I had ordered one of these. The intention of this is that it keeps enough fuel going in the primary to remove the flat spot, and give a bit more low down/mid-range poke. Problem is, I fitted it expecting great things, so I was pretty disappointed when I test drove it to suddenly find a huuuuge flat spot in the mid range. After putting the 102 back, same thing.

After fixing a few issues that were not the cause (split gaskets, cracked spacers, one gasket had burnt away) and trying another carburettor (this one wouldn’t idle unless set to maximum rich, which causes it’s own set of problems) I finally sorted it by letting it sit for a few hours full of carburettor cleaner, with everything removed that I could. After that, pleased to report the car now goes like hell (for a 2CV anyway) and definitely has more mid range punch.

Carb is a lot cleaner than the rest of the engine now. 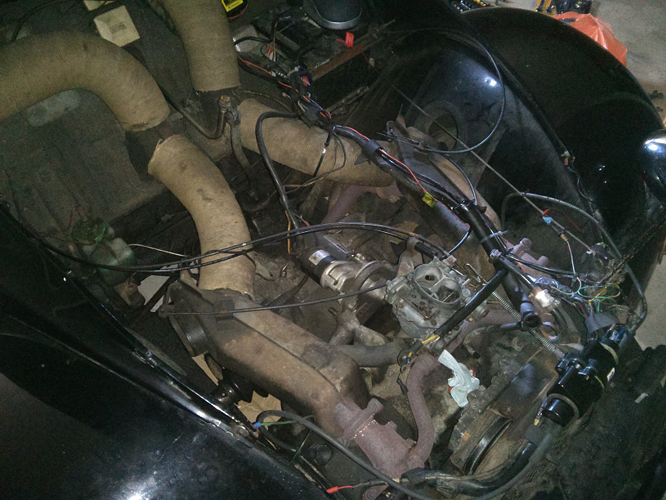 First signs of issues. This is the carburettor mounting spacer. 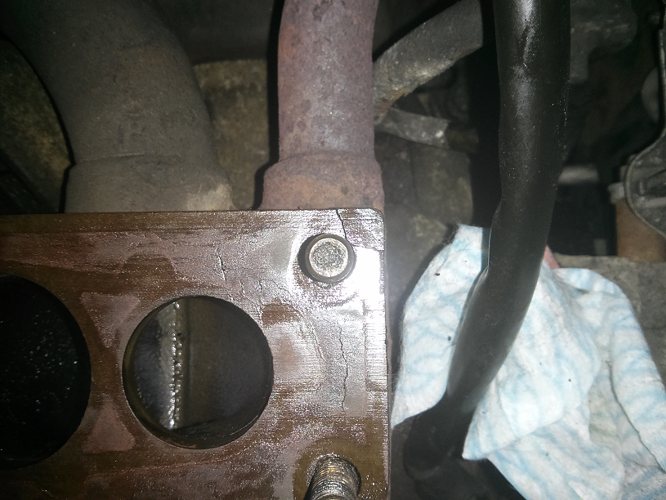 This was the burnt gasket, I think this was due to the fact that the carb wasn’t properly tightened down at the front. The nuts were finger tight when I came to take it off initially. 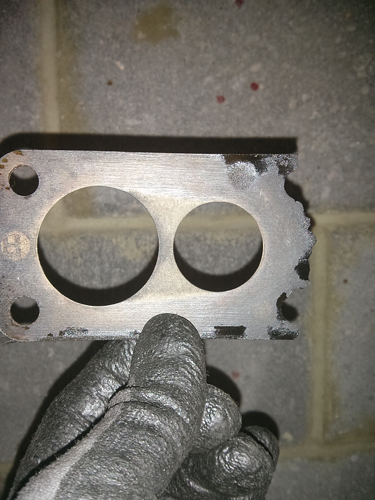 Next issue to sort is the growing oil leak, that I’m hoping is not pushrod seals.

This is a really neat car! I’m very unfamiliar with Citroen. I really dig the bumper guards and hatch-type side door glasses. And are those inside heat ducts coming straight from the exhaust manifolds or am I looking at this thing wrong in that last picture? Did you put the bigger jet back in the carburetor after you got it sorted out?

The heater tubes pretty much do come straight off the manifold yeah. There is a box on each side a bit further down you can see there that the manifold runs through. There is a little flap in each one that diverts hot air either into the cabin or out of the front arches.

Big jet is back in the carb after I rebuilt it, yeah. Might need a little bit more tweaking to smooth the idle a bit but it goes better than it ever has now. When we get a nice sunny day like today it’s just a properly cool, enjoyable thing to drive about in.

I certainly appreciate the simplicity of that machine and I’ll bet it is a joy to drive. When I try to imagine how it feels, I imagine an un-distracted, rough-but-fulfilling ride. I imagine it feels like it’s there just to get you from one place to another. No over-engineered/over-thought suspension/drivetrain/comforts, just the machine doing its job. I imagine it makes wonderful racket as it climbs through it’s paces, and I imagine it is just an absolute pleasure. Seriously cool. Enjoy the weather!

That’s pretty much got it spot on. You’d be surprised how smooth the ride is though.

Remembered to get a picture of it in the daylight for a change today. 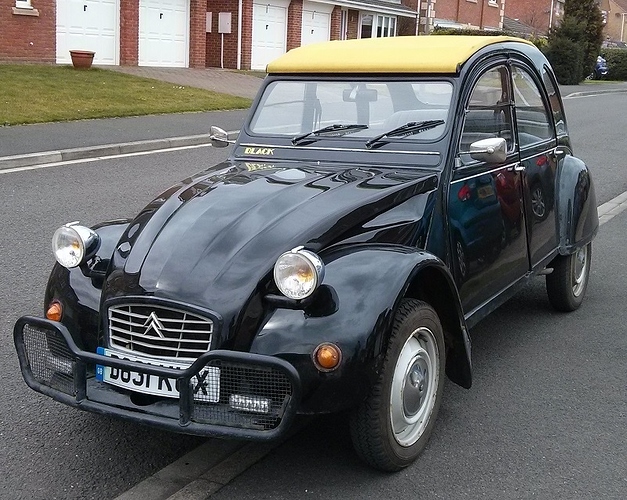 Yes, that’s a much better picture than the first one. I just realized after looking at this second picture that it has a canopy top. Your car just oozes character.

Speaking of the roof, we had some properly good weather here today for the first time, so I tried roof-off: 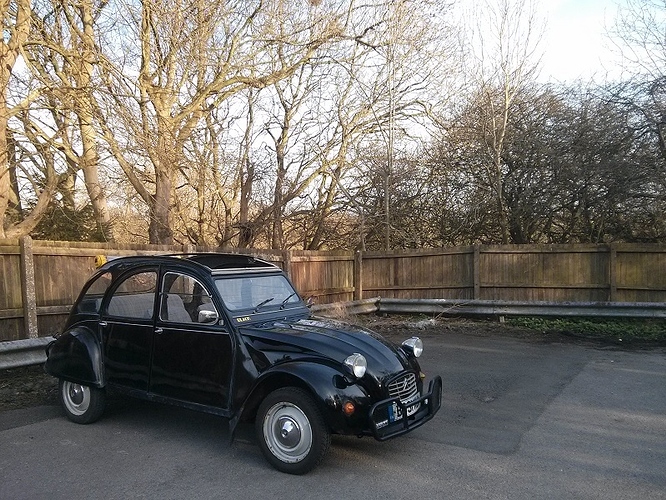 I would like to see a picture of the rear if it’s not too much trouble. I’m curious how that rear bumper looks.

Also, have you ever thought about painting those steel wheels to match the car? I think it would look really nice up against the chrome center caps. 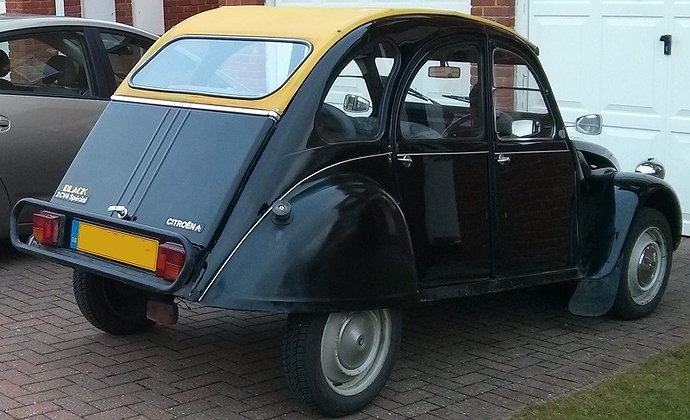 I have thought about doing that with the wheels, but I’m still undecided. I’m not sure if it would be too much if I paint them black too, the colour they are currently is what would have been standard (I think).