Kyoki Nu series is a special car series which renew a famous car within Kyoki Motors own brand,provides a performance kit for existing model,or customize models from other car brand.Today,Nu series will be the representative of Kyoki Motors in SEMA Show.

The first car we presents is the Atmosphere.Atmosphere once gained reputation from worldwide enthusiastics and have been remembered by the history.However,the disastrous successor of Atmosphere have sent this supercar series to its grave.But now,Atmosphere has been reborn!By the hands of Nu staffs,Atmosphere shall rise up and make history again!

The new Nu version has kept all the characteristics and traditions from the original!
First of all,this vehicle is powered by a naturally aspirated V10!The old engine form the 1990 have been completely rebuild in order to get pass the emission limit and more importantly,more power!This engine now has a slightly shorter stroke in order to rev highter.Now,it can roar to a mind-blowing 9500Rpm(Insert Over 9000 meme)while producing a whooping 658Hp!

The body work also changes a lot.The rear has been lengthen in order to have better drag performance,which is wide-known as Atmosphere’s weakness.Now she can reach 100km/h in 3 secs and can go up to 360km/h!But that is not the only thing!In order to get more downforce,Nu has a massive hole on her butt!With the new active duo-wing design,now she have over 500kg downforce when cornering,or only 125kg when you are aiming for top speed.Atmosphere Nu also has the newest infotainment system which guarantees excellent driving experience.Atmosphere Nu,the successor of the glory and king of track!

In cooperation with @strop, the latest new versions of the Prova for some added

The motorsports version is coming soon.
Thanks to @Rk38 for the nutty car.

Aiming to boost performance the Prova receives an overhaul of the interior (a change to 4 sport Reclaro bucket seats), significant engine overhauls (new camshaft profiles, an aftermarket NHI turbo with more boost, custom lightweight free-flowing exhaust system, uprated intercooler, a performance air intake and new ECU) as well as a new bodykit that produces more downforce together with Seebach coilover springs in addition to stiffer anti-roll bars. Tyres are also upgraded as are the brakes. The stock mechanical LSD and 6 speed manual is retained.

The stage 2 package is sold as an add-on package to a stock Prova with an expected cost of approximately $5000.

I’m struggling to get any of my video presentations done in a timely fashion. Most of the models are ready and the tuning done, and it’d be a shame to let the deadline lapse without anything to show for it.

So as a preview:

RCM is proud to present two custom versions of the 2019 Suburbia crossover. Both of these modified vehicles preview possible equipment upgrades available from the factory and RCM dealerships.

The Suburbia Street Custom is tuned for performance, with the standard V6-M 3.5 replaced by the V6-M 3.5-S used in sporty applications, as well as the automatic transmission replaced by a 7-speed dual clutch system. This means 300 hp being put down to all four wheels through 245/45R24 tires. The air suspension system also makes the Suburbia Street Custom a true street machine, alongside the carbon trim, lips, and metallic yellow paint. The interior has been upgraded to a luxurious black and yellow leather coccoon for any occupants wanting to show off their style, while the audio system comes straight from the Mont Royal division. 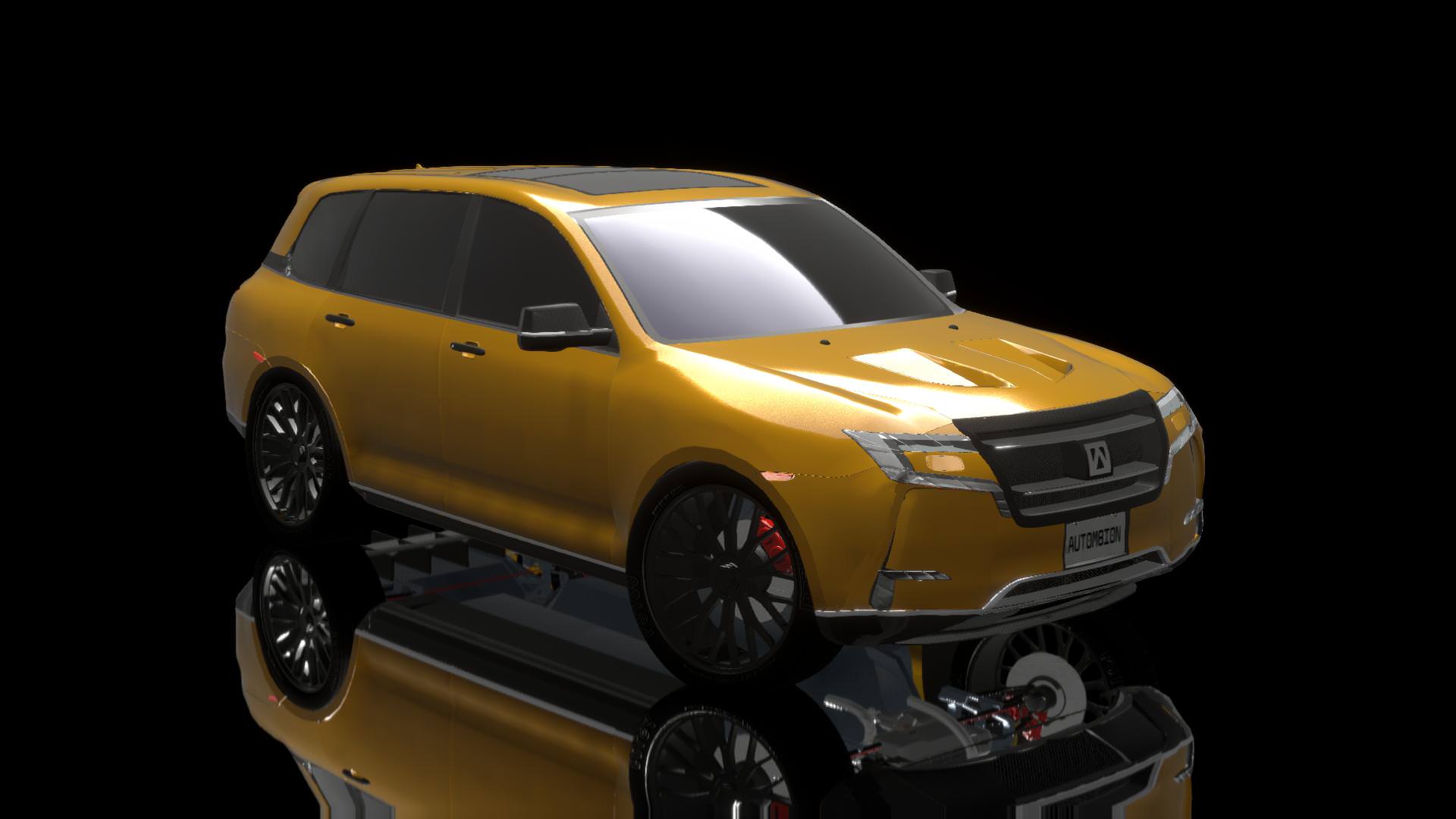 The Suburbia Offroad keeps the V6-M 3.5 and the 9-speed automatic, but the LSD has been replaced with a manually lockable axles and the AWD modified for symmetrical power distribution. Also upgraded is suspension, with new heavy duty offroad shocks. To ensure true offroad performance, chunky 245/70R20 tires have been fitted and a new skidtray will prevent damage to the underbody. Completing the look is modified trim with cladding added around the arches, a bull bar, larger roof rails, and two light bars. 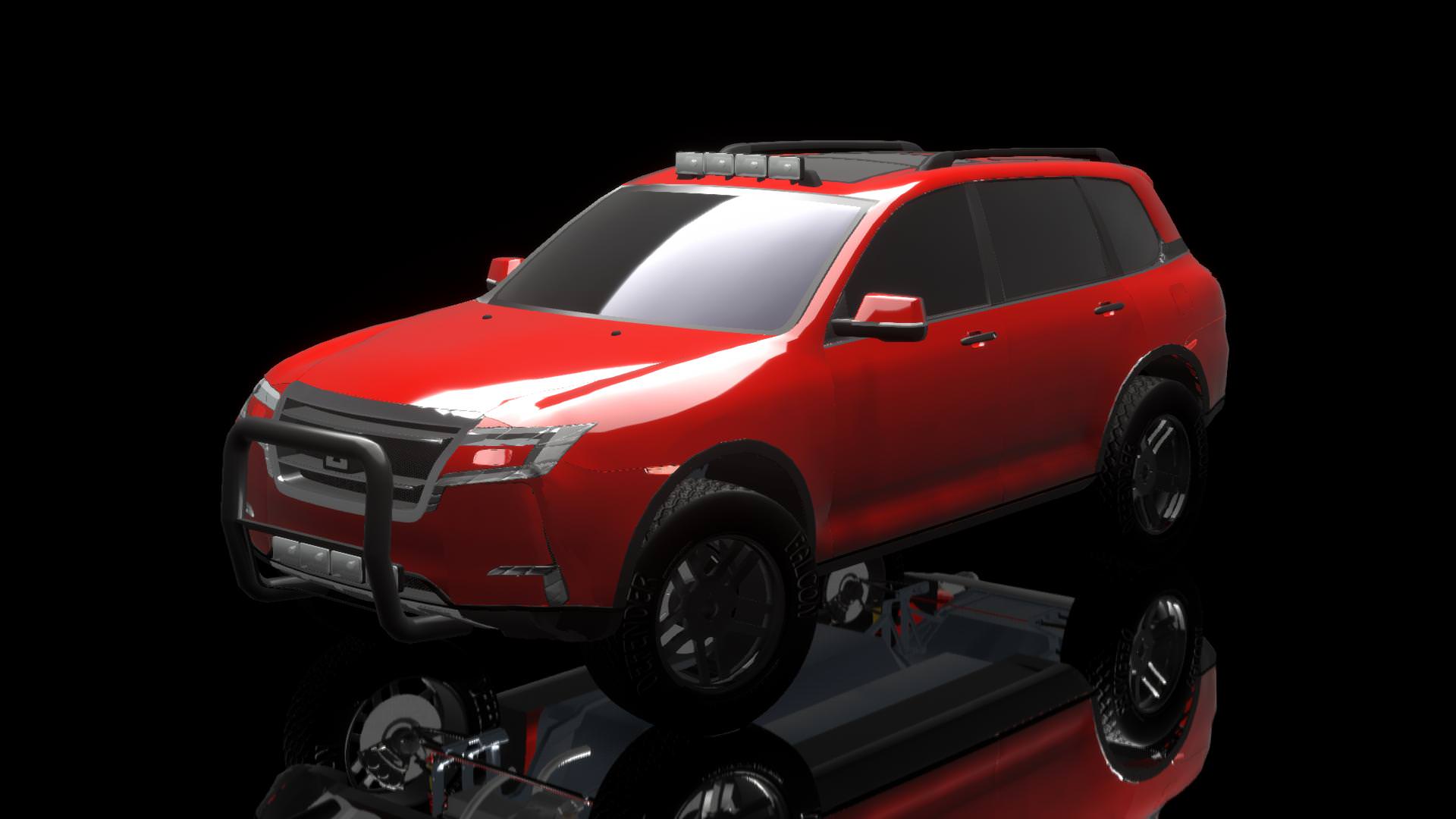 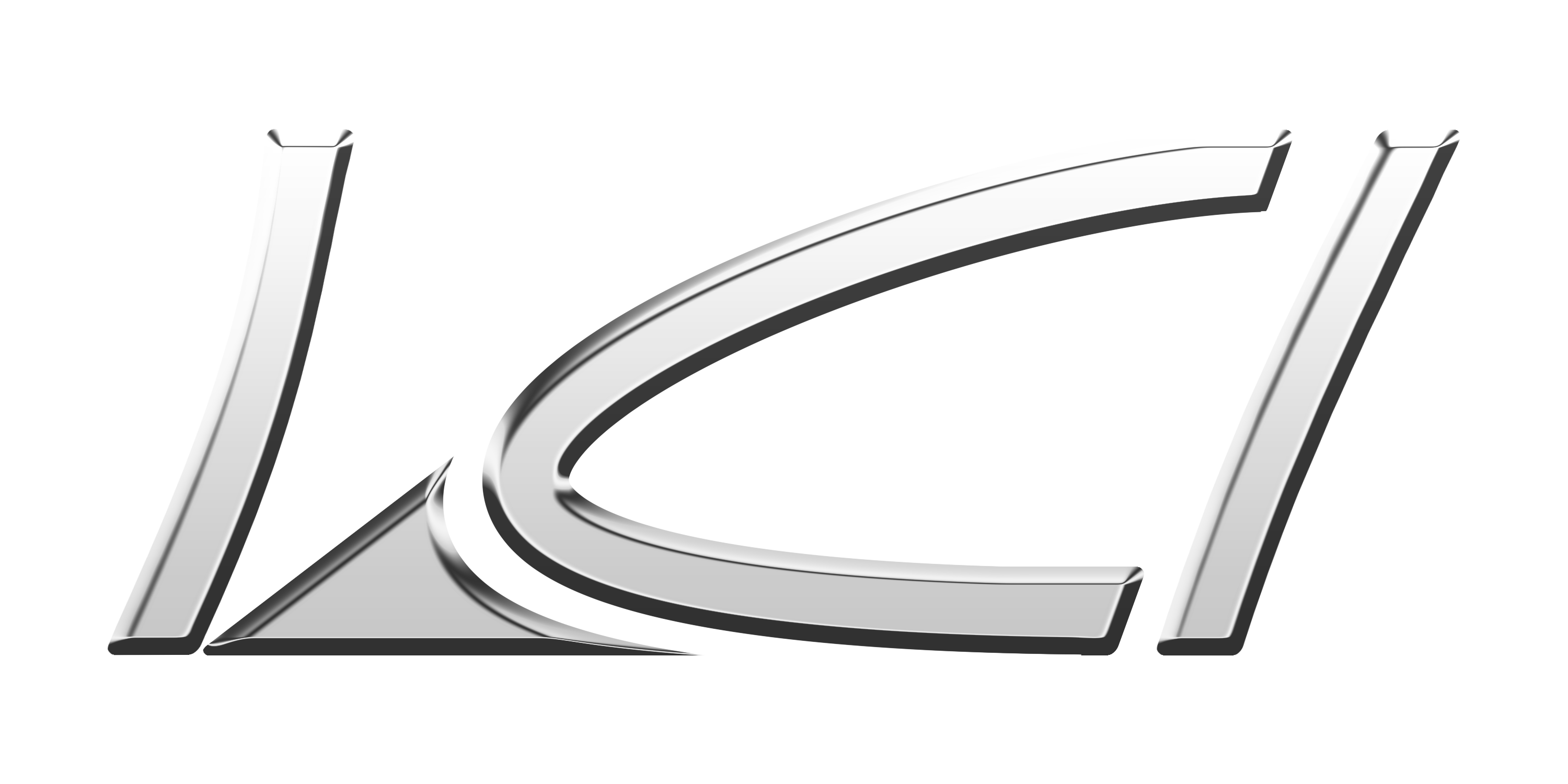 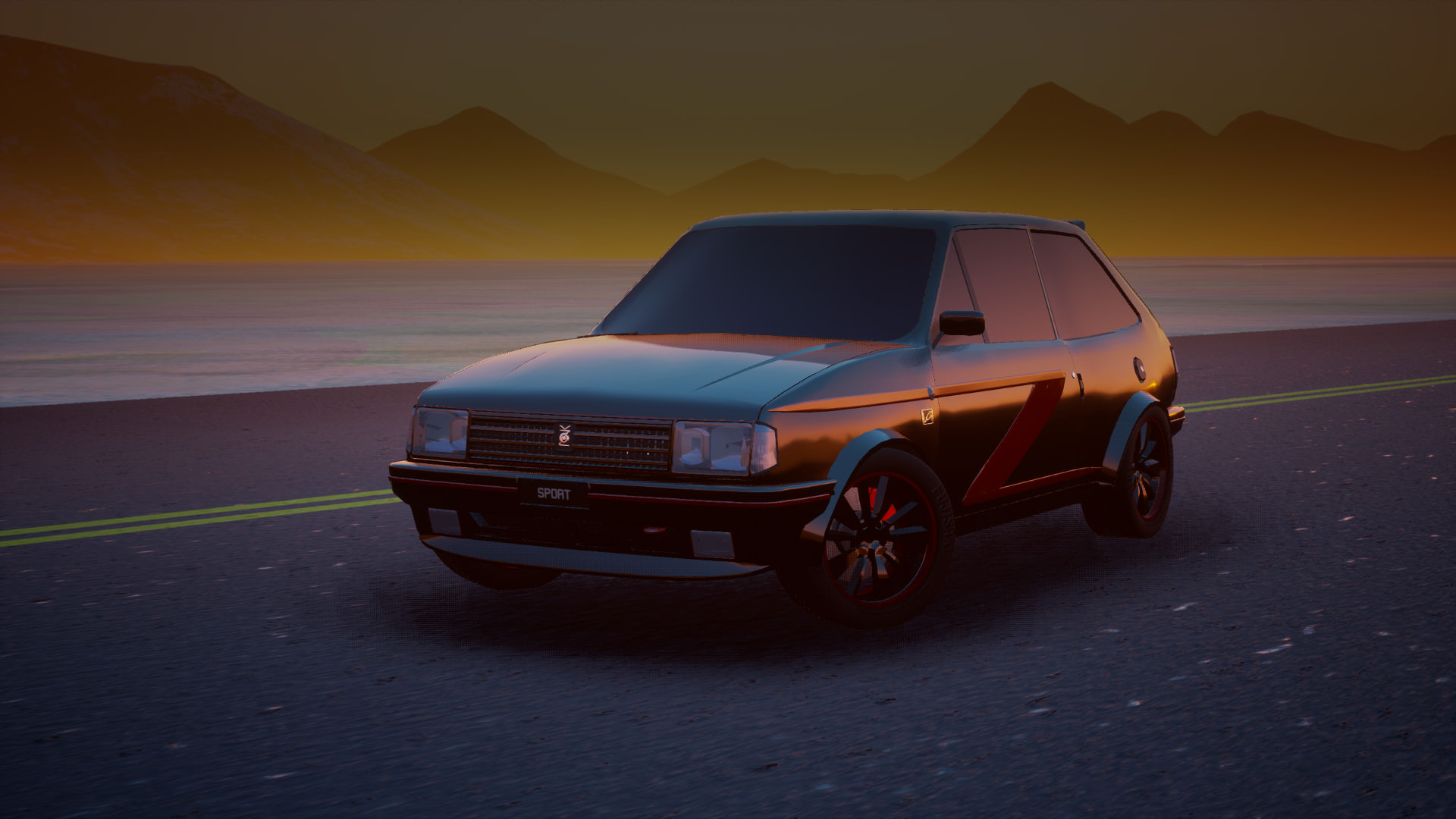 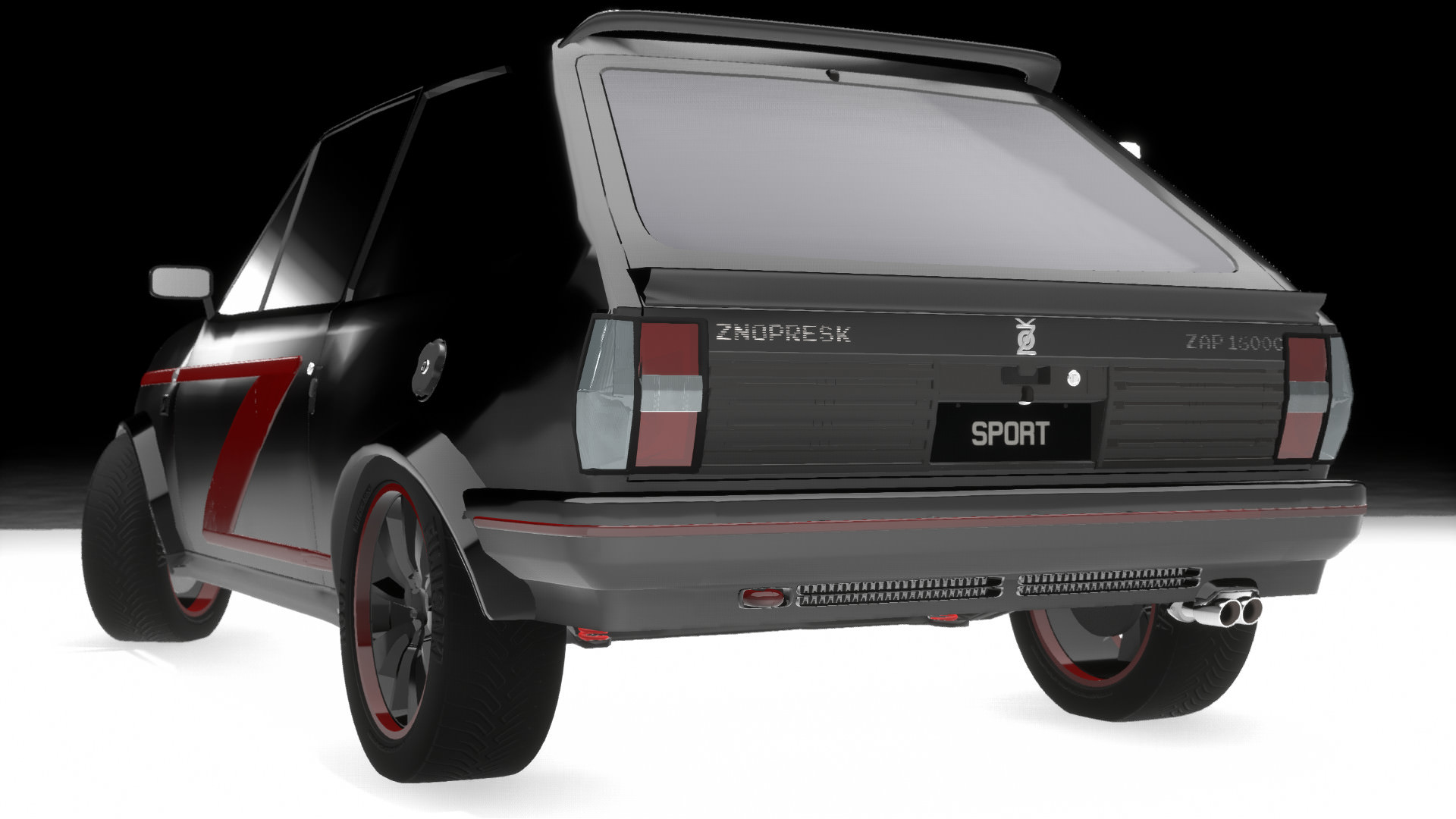 One of our favourite cars to work with at ChipsWorx Tuning is the Znopresk Zap; we have a soft spot in particular for the BR01C generation. Right from the factory, they were a cheap, reliable and very tunable platform. So, when we heard of a local selling three Zap 1400s, we jumped at the opportunity to take one of our favourite cars and do something special with it. 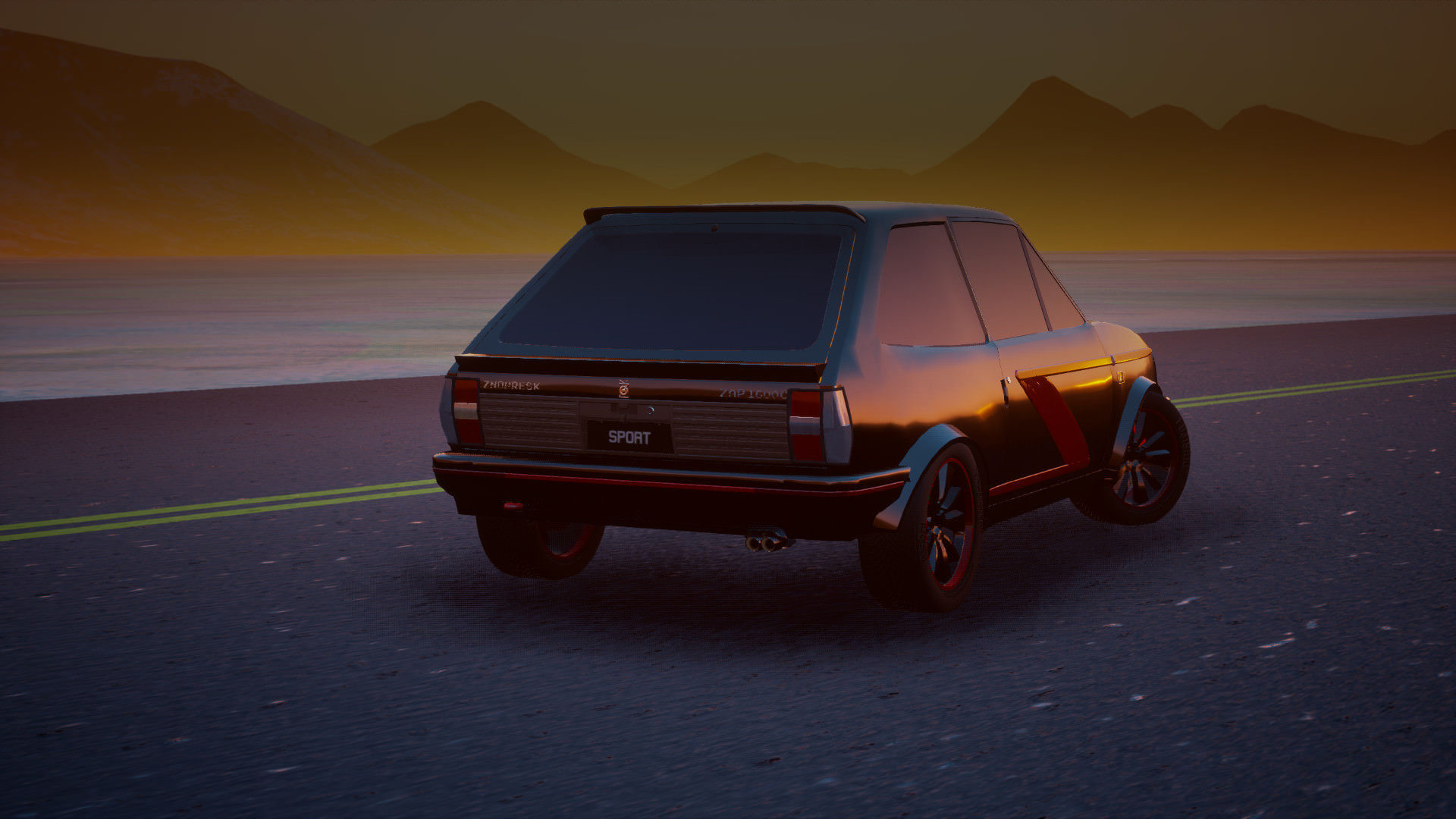 Once we got a hold of the three Zaps, we dragged them back to the ChipsWorx shop and had a good look at them; they were all pretty rough around the edges, but the red '84 Zap 1400 was by far the best of the three, so we set about stripping the car down to bare metal for a full restoration and ChipsWorx reimagination. The further we got along with the teardown, the more we realised what we had to do with this car; we needed to stay true to the Znopresk mantra of building solid, cheap and fun cars. As such, we made a conscious effort to keep the ChipsWorx Zap reasonable and attainable, but at the same time moving the bar for performance and engagement. 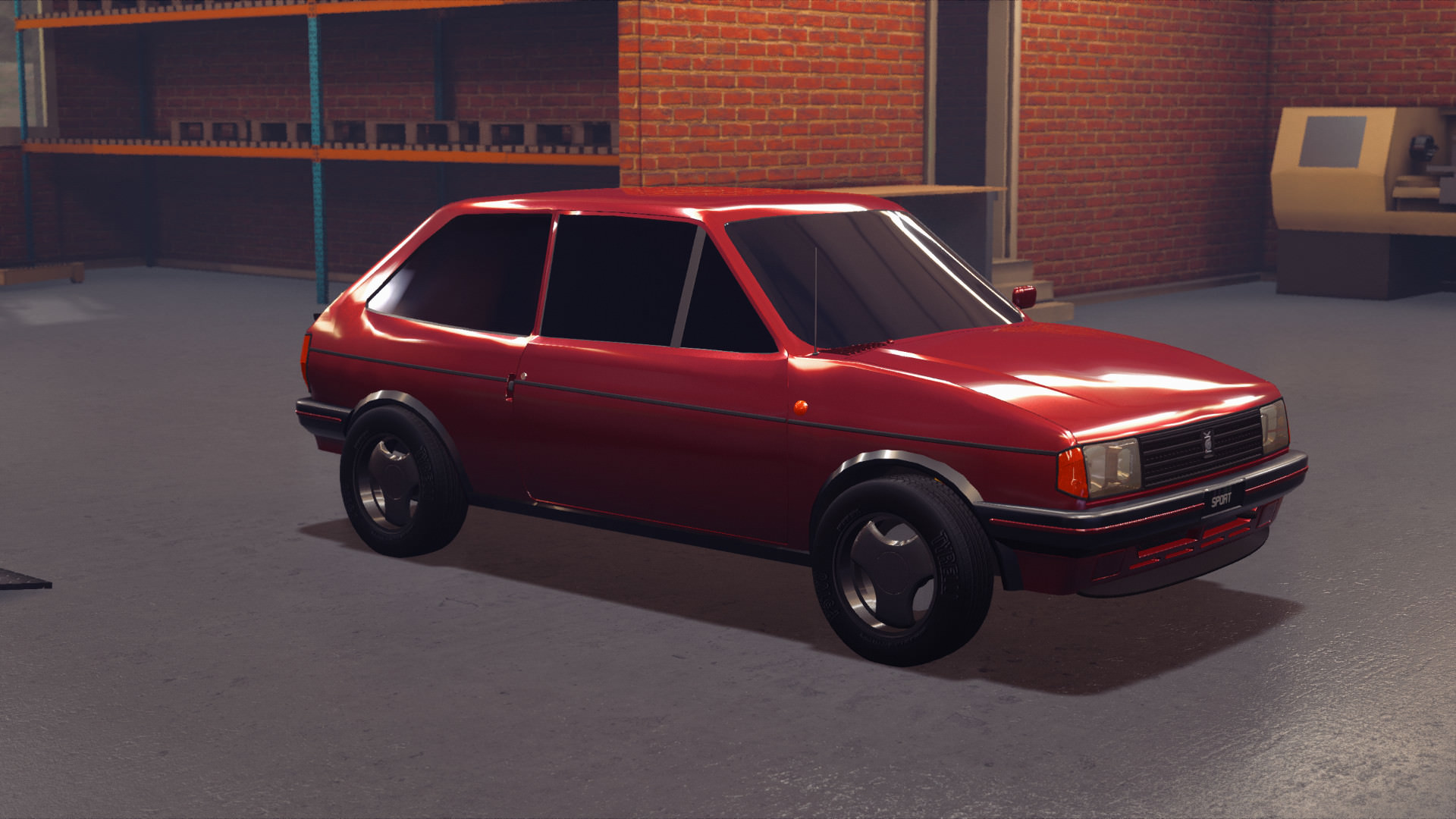 First and foremost, we gave the ChipsWorx Zap a special paintjob, using Scagliati Nero Spazio for the base and Rosso Veneto for the accent colour. A special “Z” stripe to give the car some pizzazz after we shaved and filled in the body trim strip, as well as our special homage to our friends at Znopresk. Aftermarket coilover suspension was fitted, which dropped the ride height by approximately 30 millimetres, and 15-inch wheels were fitted to give the car a more aggressive stance, as well as opening up a range of modern performance tires. 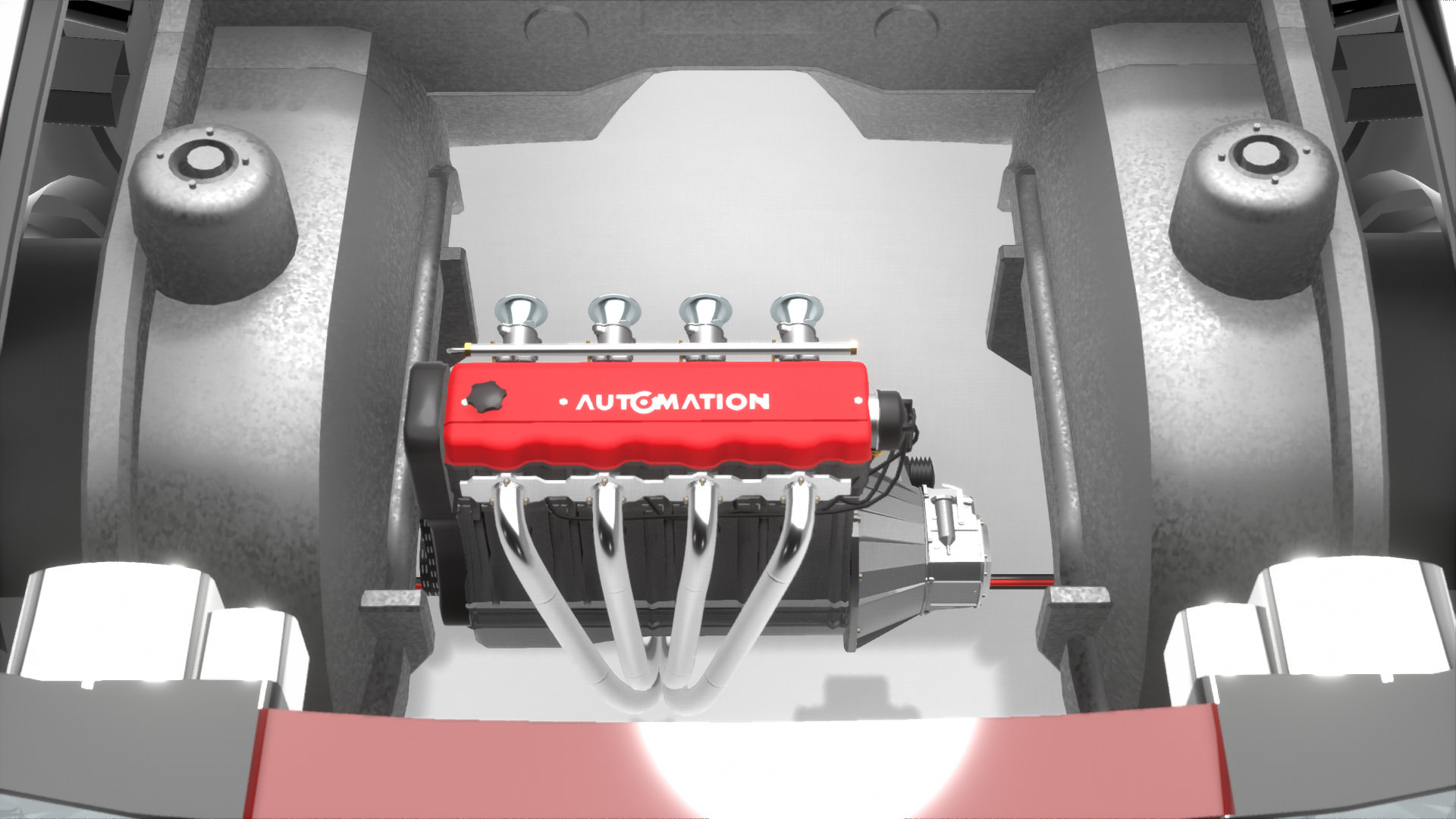 Under the hood, we bored and stroked the 1400cc engine out to 1600cc, fitting it with forged pistons and rods, though using a stock 1600 crankshaft from another Znopresk model, bumping the compression ratio up to 11.0:1. More aggressive cams were fitted, and an aftermarket tubular header was fitted, along with a GigaSquirt port fuel injection system, all breathing through a set of individual throttle bodies we adapted from a Bluzuki motorcycle engine. Even with an aftermarket catalytic converter fitted - we worship at the temple of speed here at ChipsWorx, but we too feel a desire to protect the environment - the net result blew everyone away; the Zap 1600 ChipsWorx engine produced 160 horsepower on the dyno, and revved out comfortably to 8500 RPM…a far cry from the 92 horsepower the Zap 1400 came with in 1984! 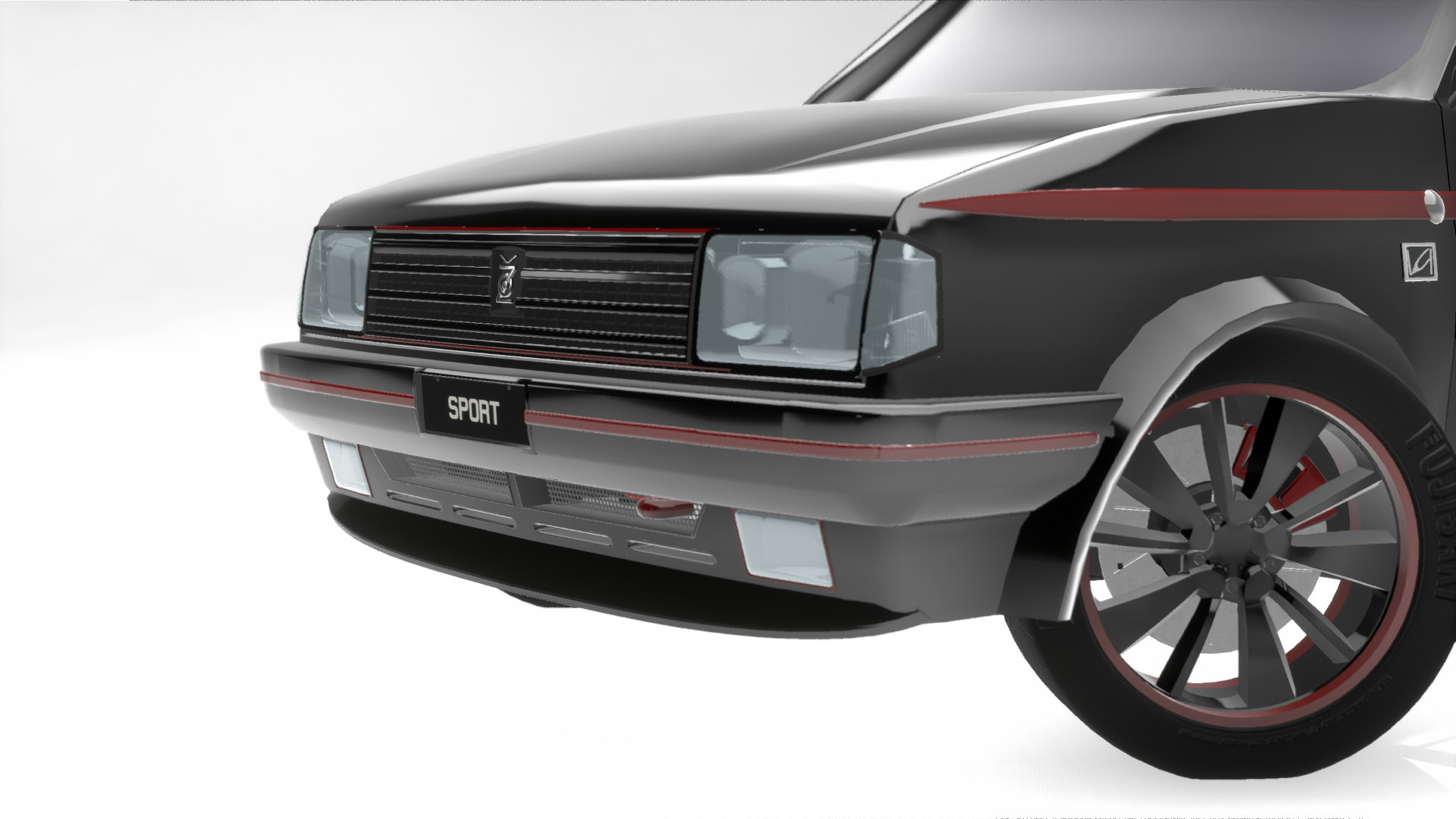 Inside, we fitted the Zap 1400 with a set of body-hugging sports seats front and rear, while retaining the rest of the interior for that vintage budget racer feel. A geared differential was our final addition to the ChipsWorx Zap, to try and tame the power of the ferocious little engine in a very light (820 kilograms) car. 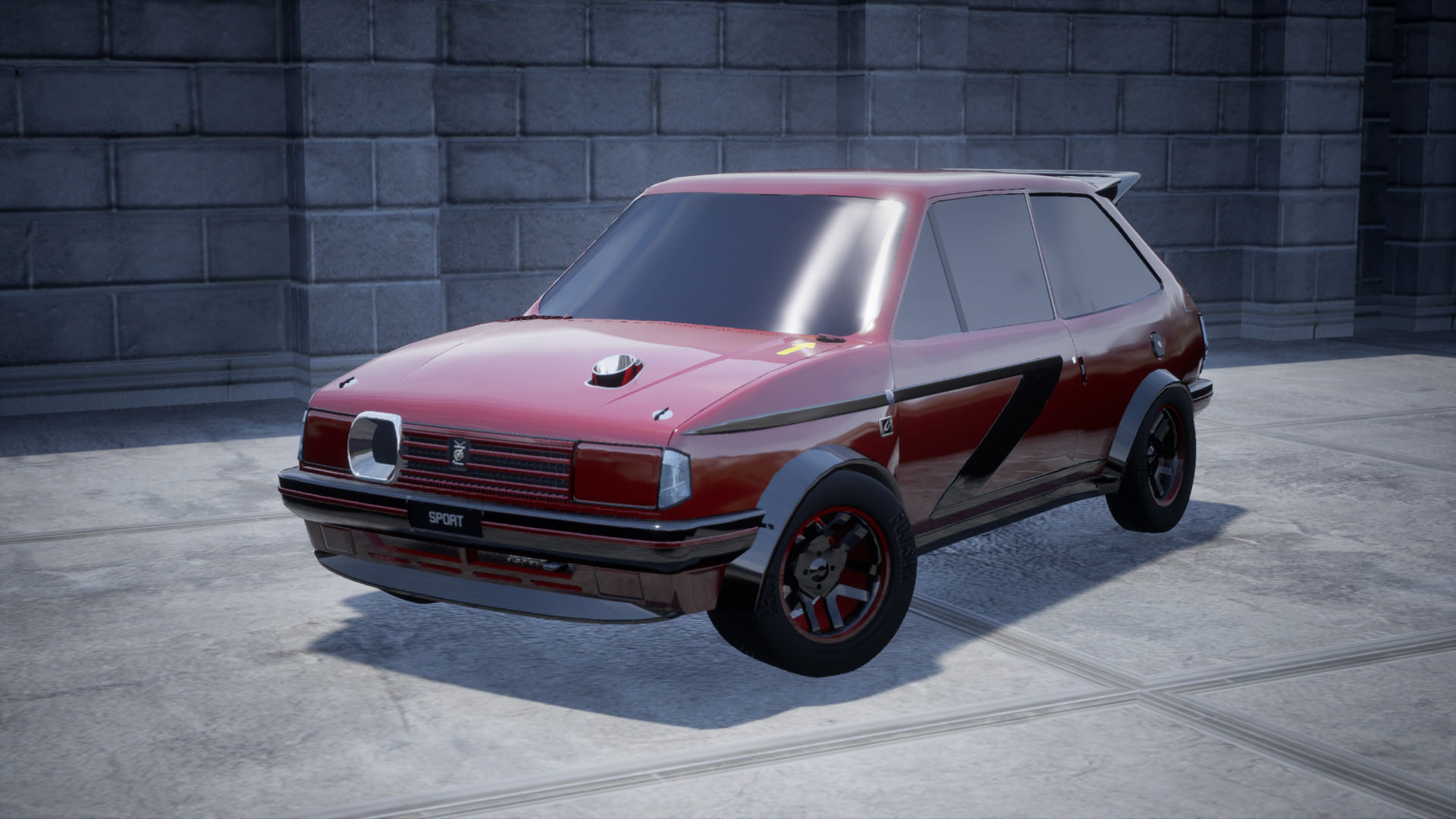 The second Zap we purchased was a little rougher still, with a significant amount of rust in the rear unibody, and signs of accident damage earlier on. We decided that if we were going to rebuild this car, we might as well make something a little more extreme out of it. After many cups of coffee and arguments later, we finally arrived on the idea of making a drag racer out of the second Zap, with the best performance per dollar ratio we could muster. 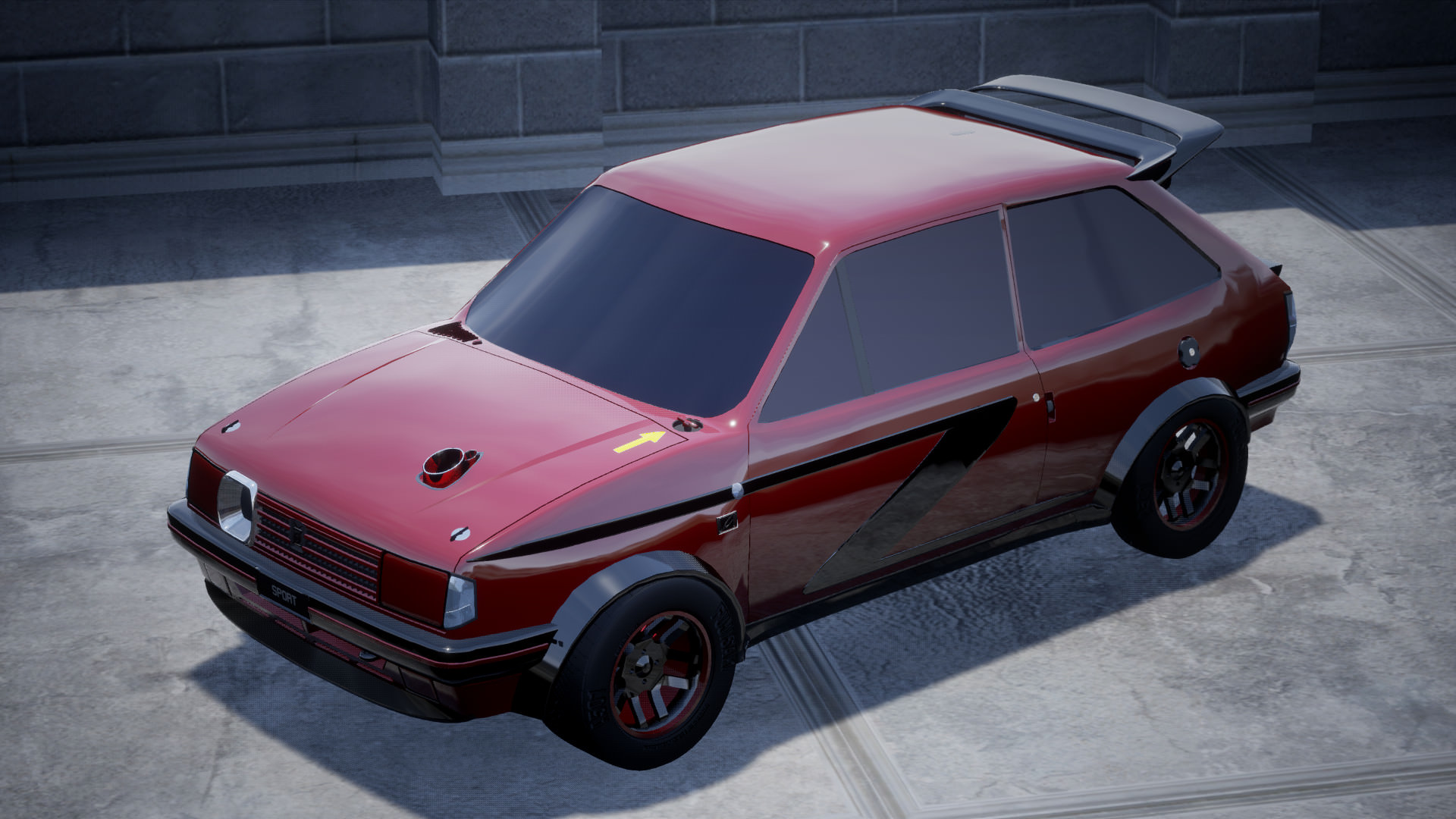 Starting with the basic aerodynamic and aesthetic modifications we made to the base ChipsWorx Zap, we pushed the design even further, with widened fender flares, more aggressive rear aero and a fatter front spoiler. 14-inch drag slicks were fitted to the front wheels, and a set of runner wheels were fitted to the rear. We also decided that a reversed paint scheme, with a red base and a black accent, would be appropriate for the DragStar, as we started to call the little rocketship, to accentuate its difference to the standard ChipsWorx Zap. 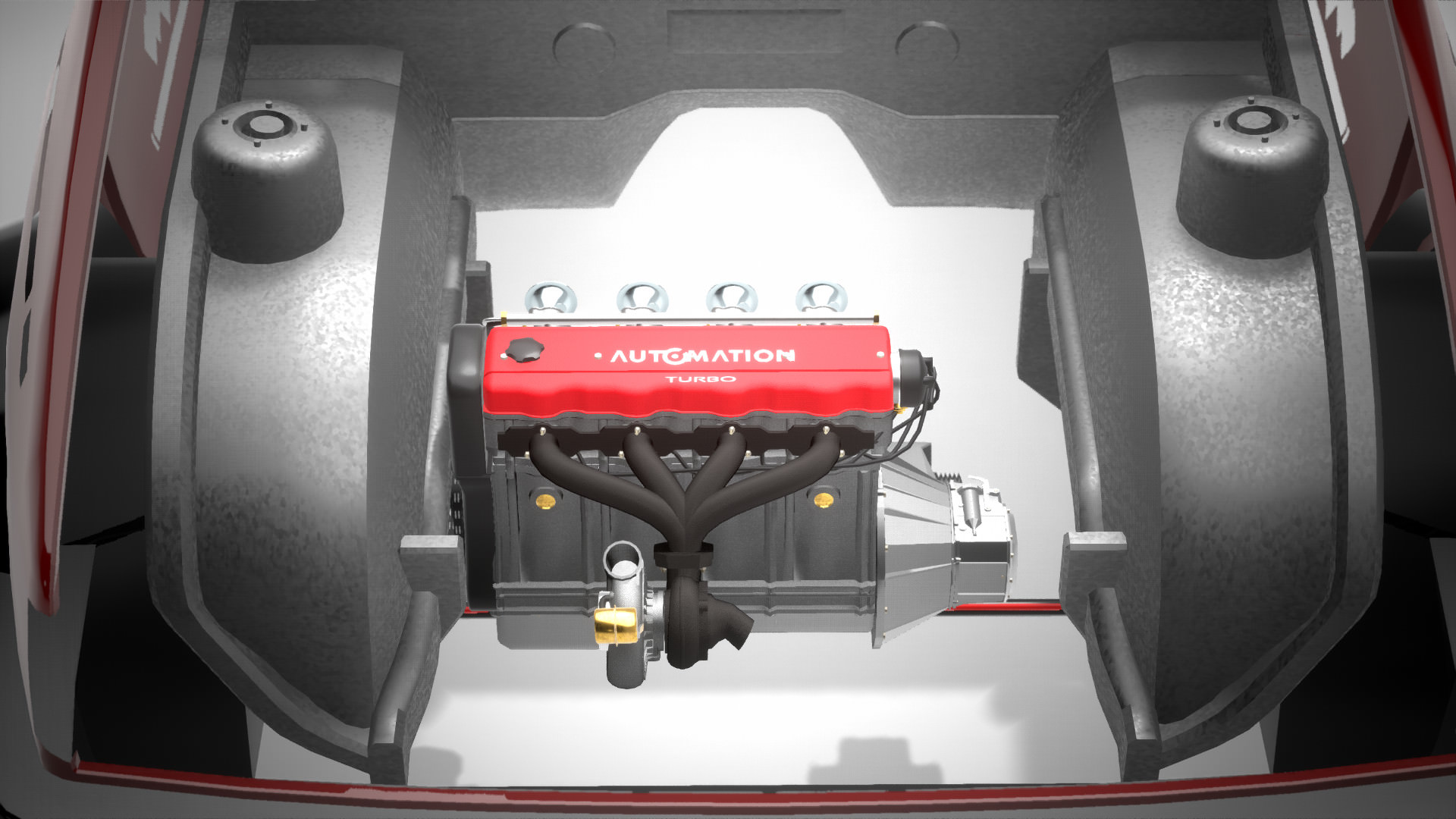 Under the hood, we bored and stroked the Zap’s engine as far as we dared, taking it out to 1980cc, and fitting the engine with the finest motorsports-grade internals we could get our hands on. A custom-made intake and exhaust system was fitted, with the turbo intake necessitating a huge forward-facing inlet in the front grille, and the exhaust dumping straight out of the hood. Tuned to run on racing gas, the little engine produces 505 horsepower, and can propel the Zap DragStar down the quarter-mile strip in the low 11-second to high 10-second range. 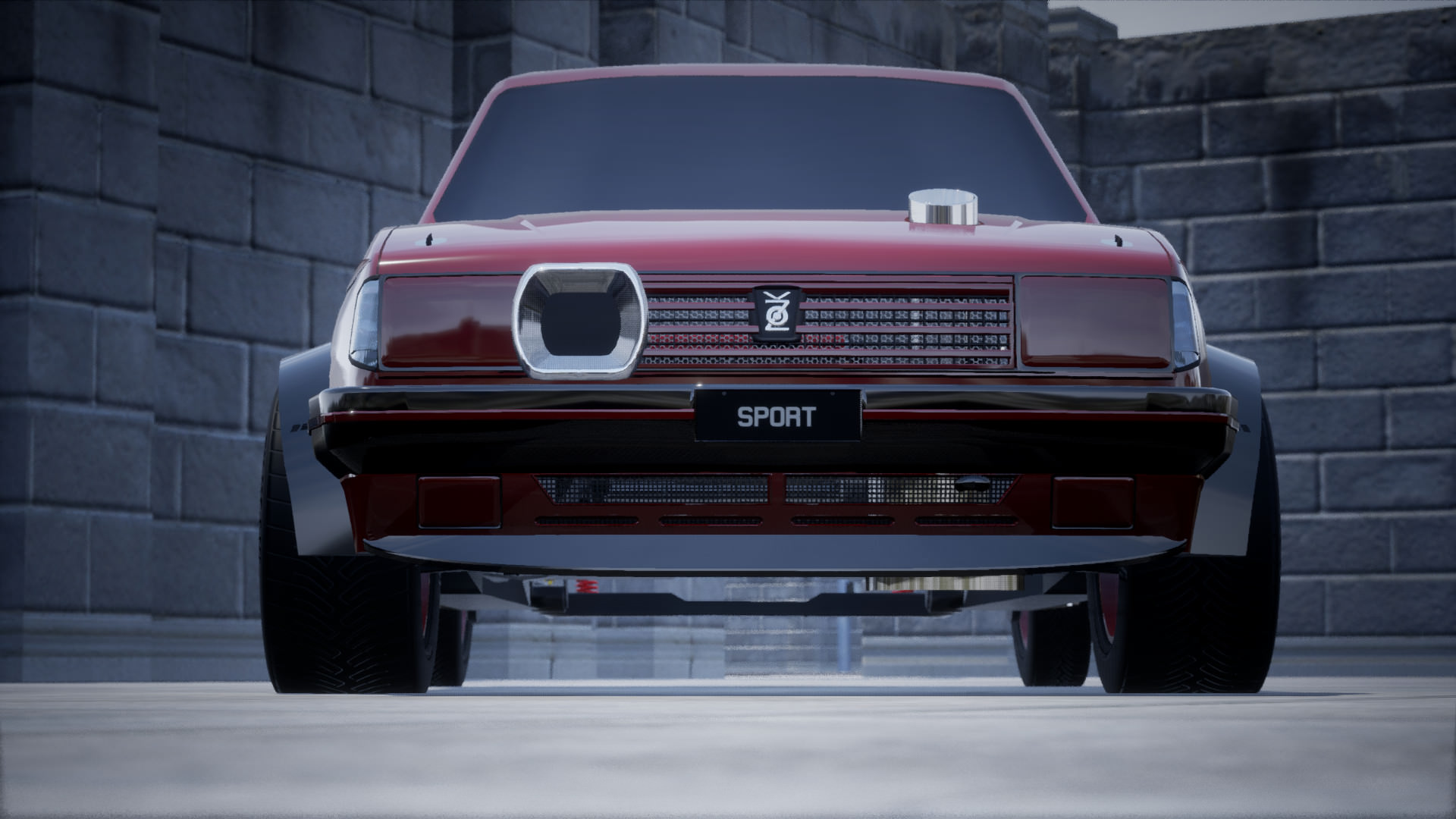 For the amount of work and the amount of money we spent on the DragStar, we are extremely pleased with its performance, and we are considering adding the DragStar package to our list of customer build options, starting in early 2019, to accompany the standard ChipsWorx Zap. 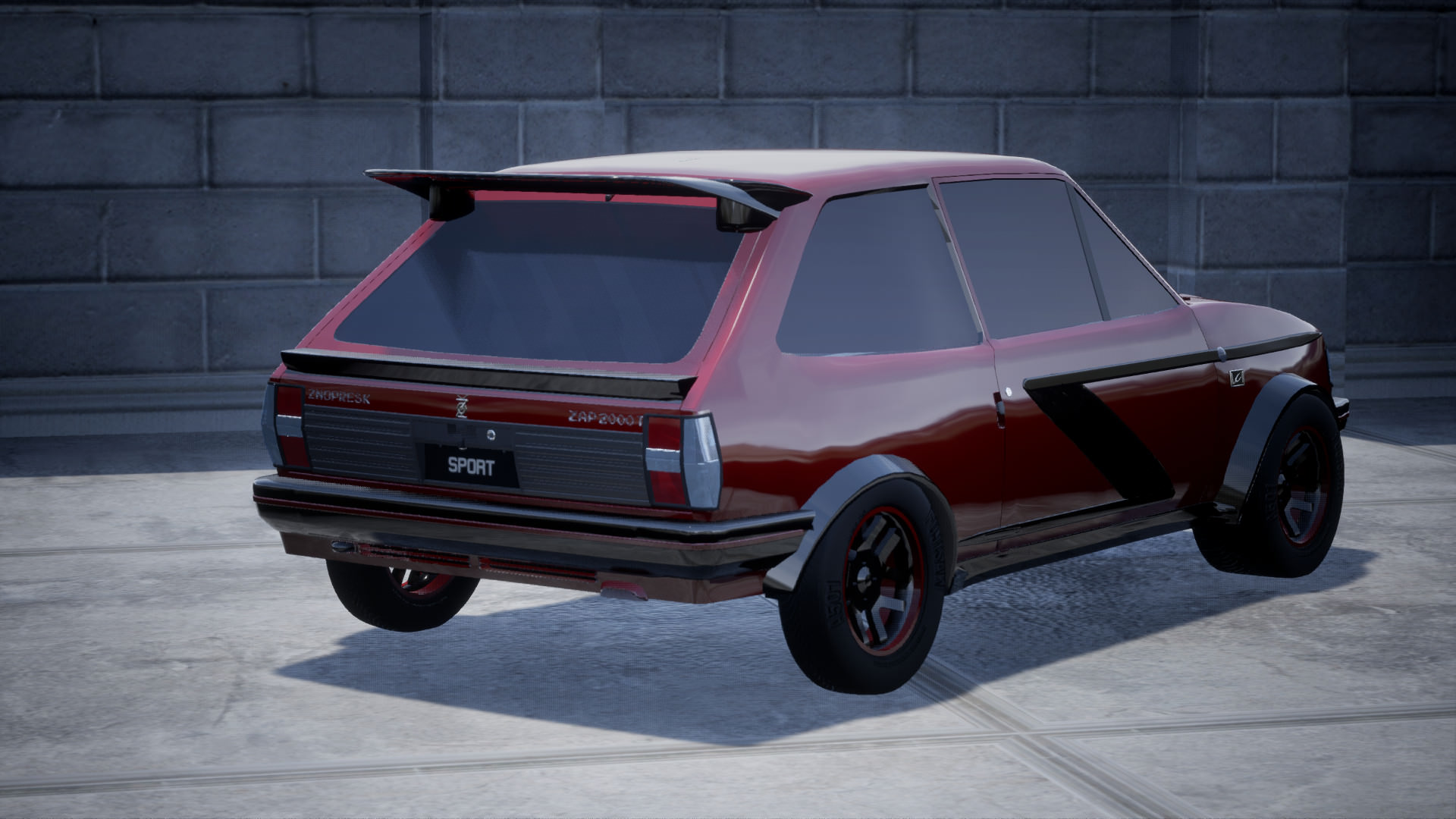 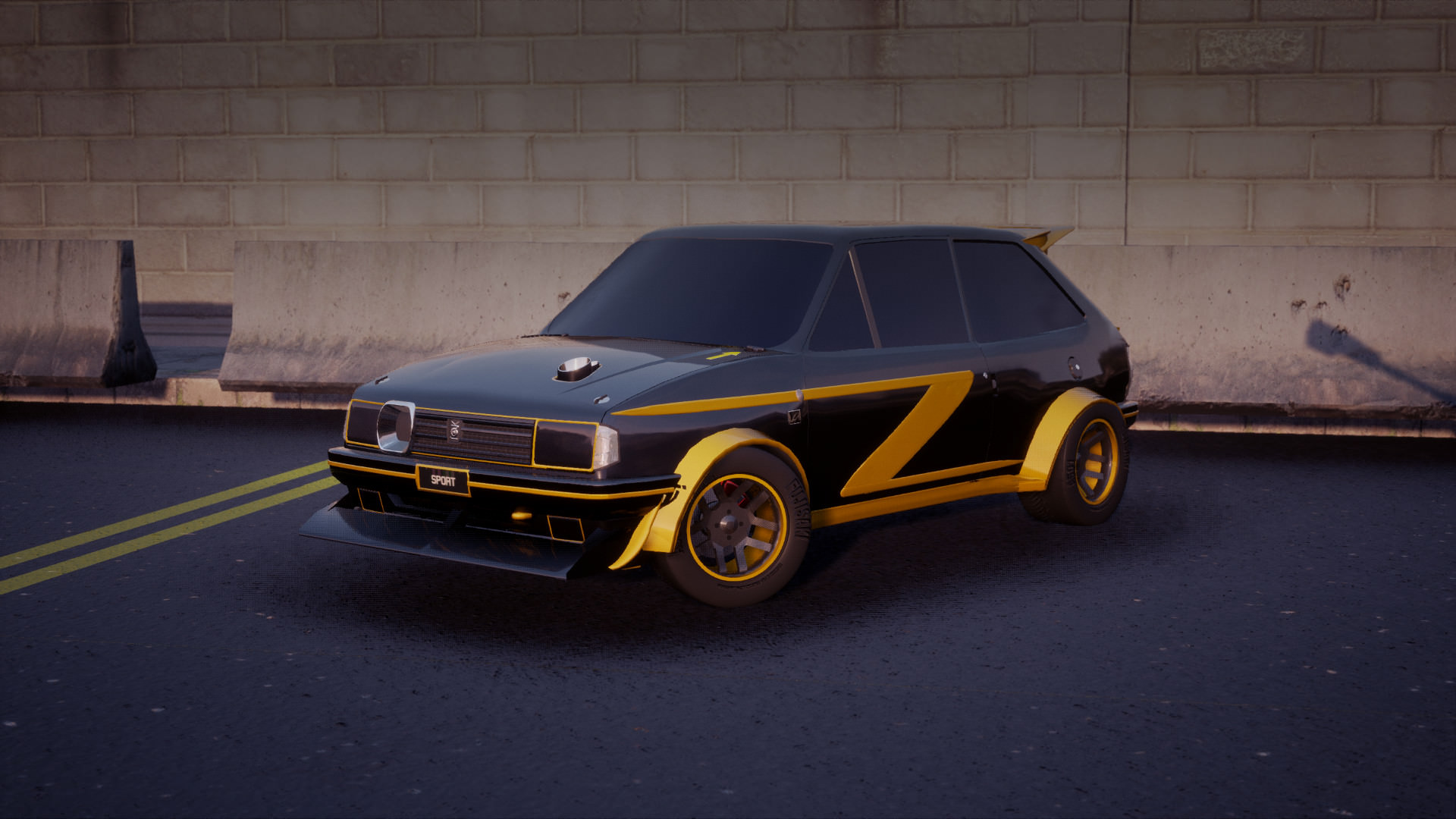 Our final build is perhaps the most extreme of all, a time-attack version of the ChipsWorx Zap. Starting with the final Zap, we decided to build an unrestrained, money is no object time attack car out of the Zap. Using the DragStar as a template, we fitted an all-new aero package to the car, with an aggressive front splitter and vanes to generate as much downforce as we possibly could. Paint came out of the CMW catalogue as well as the Scagliati catalogue again, with the body base being CMW Kohlenschwarz, and the accent being Scagliati Giallo D’oro to produce a striking appearance overall. 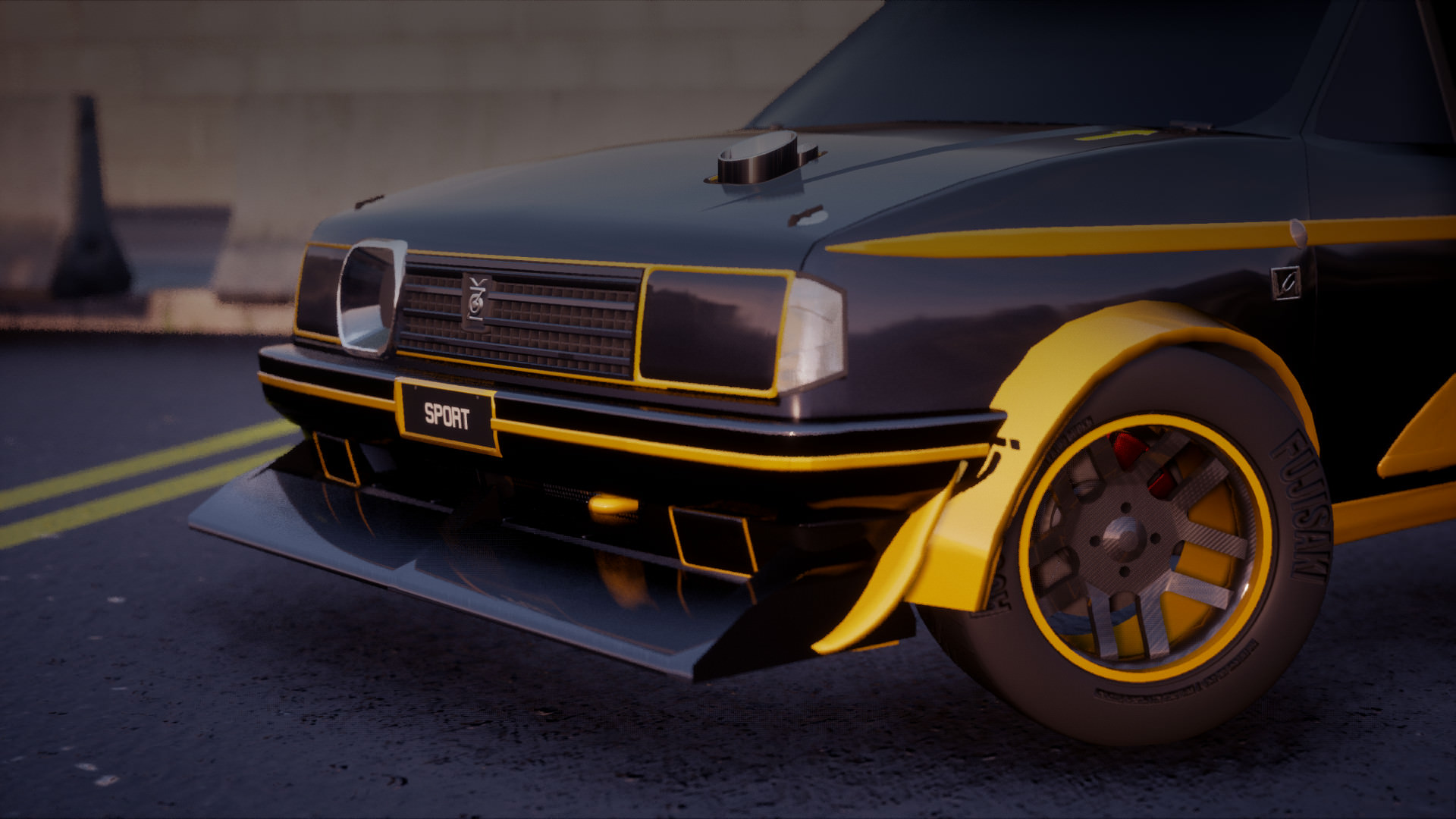 Using the same engine as the DragStar Zap, we fitted proper suspension front and rear, along with square 245-section tires front and rear, aggressively set up to produce maximum cornering grip. The gear ratios and differential were adjusted, giving the Zap Attack! a top speed of nearly 300 kilometres per hour. This give the Zap Attack! the ability to pile on speed in nearly any gear like no car any of us have ever driven, thanks to its curb weight of 803 kilograms - a remarkable achievement in and of itself, and a testament to our craftsmen and women in the ChipsWorx shops. 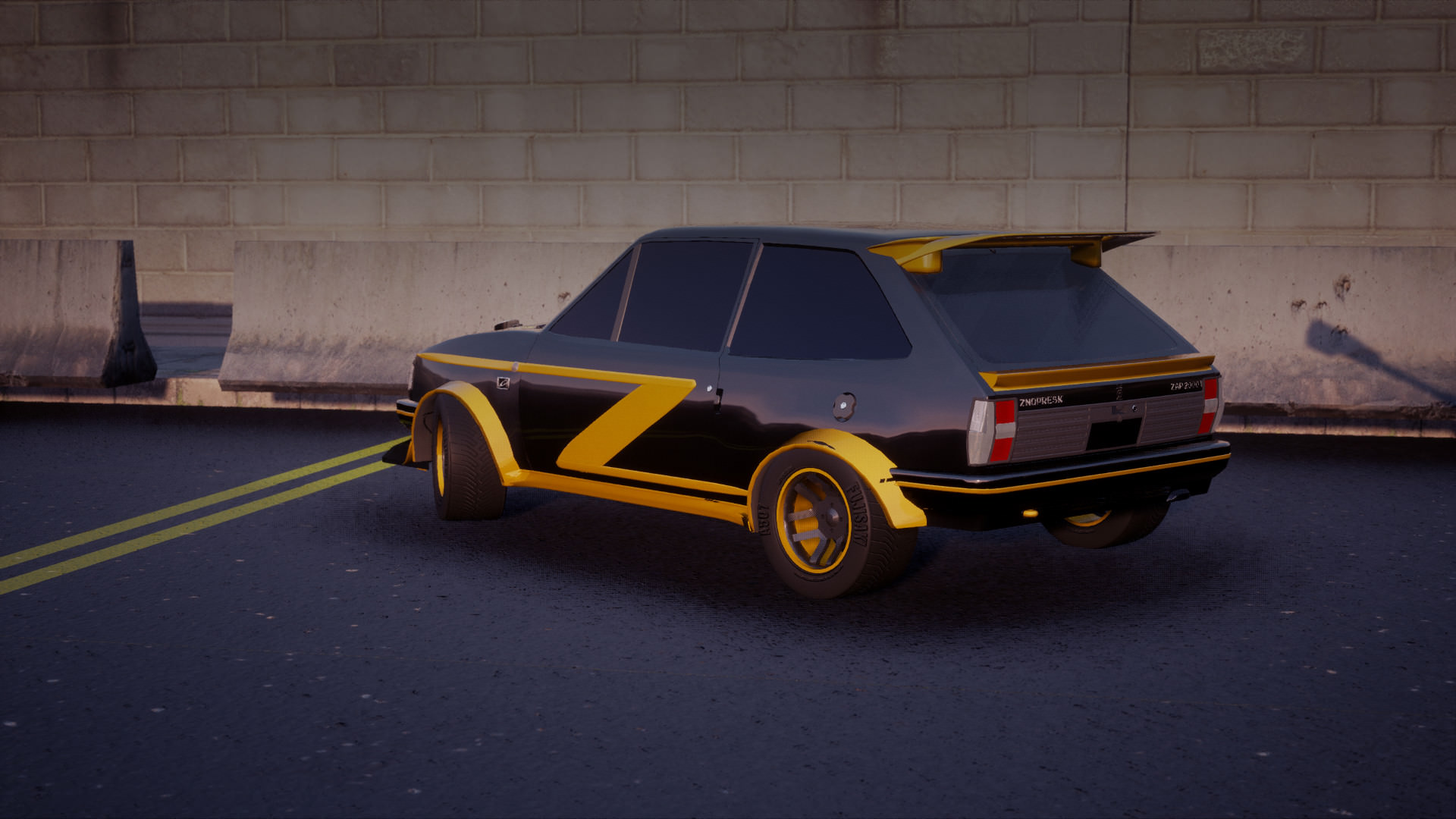 A huge thanks to @NormanVauxhall for generously providing me with a Zap to tune for this show!

the Znopresk Zap is starting to become one of my favourite lore cars of the Automationverse, even more now.
Amazing job and story.

Thank you everyone for your participation at SEMA. We hope you enjoyed taking part and viewing all of the awesome creations.

The next event will be at the Los Angeles Auto Show, which begins November 26th; a page will be opened early in the next week.

Please do not unveil any more cars.

In the mean time, we will be having a public best-in-show vehicle poll to incorporate into the famous racing game Dynamo 4.

Please vote for your favorite modified car. You may not vote for your own entry. After this initial voting bracket we will vote for our #1 choice. Again, no OEM companies will be admitted.

From mild tune-ups to pure lunacy, Treadkillers has virtually everything covered. It’s easily my favorite stand at SEMA so far.

Thank you for your initial vote. Please choose your favorite choice from the top two categories.

Snow plowers of the future!

This is late, and past the close of voting. Maybe it could have changed things, maybe not. What’s more important is that I’m proud of this work and grateful for what this Beam x Automation collaboration has made possible.

Yes, there are a couple of imperfections here and there. I think I will go mad if I try to fix them!

EDIT: nah actually screw that I’ll remaster it and fix some of the cuts later.

Chief called and he says “this is it”.

I’m sorry for not being able to present my cars, but it is what has the lack of time. Even so, I’ll put them in the Montes post.

Thank you everyone for your participation in this event. We hope you enjoyed taking part.

The car voted best-in show was the ChipWorx 1984 Znopresk Zap Attack! Congratulations to @MrChips and @NormanVauxhall for winning the overall award, and expect your car to be seen in Dynamo 4 soon!

The next event will be the currently-standing Los Angeles Auto Show.

Please do not unveil any more cars.