Welcome to the first round of the Endfinity’s Design Challenge, the competition of both technical and visual design. The theme of this stage is 40s-50s Soviet Union. The people of the Union need a practical, cheap car that would get any regular job done. However it does not stop there, as some parts of the country need something more specific, so another version of the same car is needed: the offroad variant. 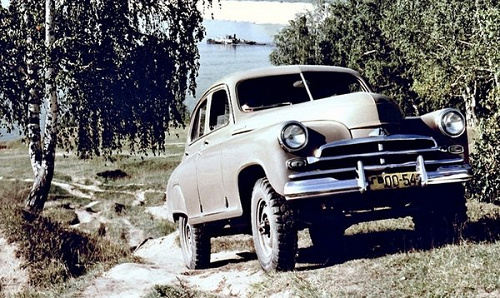 For this challenge, we will be using the 1966 soviet vehicle classification table.
For this time we will only be looking at the engine displacement column. The vehicles we are looking for can be anywhere between second group subcompact and first group midsize

Once again, 2 versions of the same vehicle are required. This can be done in 2 ways:

Now onto the rules
The general rule is be realistic. Completely unrealistic builds will get a big penalty.
All cars must be created on the current stable branch, regardless of whether it uses mods or not.
All trim and variant years need to be set between (including) 1946 and 1956
The engine you will be using will have to be the exact same one on both versions, so let’s start with engine specific rules:

For the main car specific rules we have this:

As for the offroad specific rules:

The judgment will be based on the cars’ stats, appearance and viability of engineering choices. Market competitiveness will not be directly relevant to this competition.
Things to look out for are mostly:

The final deadline for this episode is 4th of April, 18:00 GMT+3 OR whenever the stable branch of the game moves to the new engine version.

Only 1 entry per user is allowed

How to submit an entry
DM me the 2 .car files through automation discourse
The naming should be as follows:
Model name: EDC1-{O(if it is an offroad specific model)}-[Your nickname]
Trim name: Name of your car and trim
Engine family and variant: whatever you would like

regardless of whether it uses mods or not

On the subject of mods, there should be no place for meme mods (such as furry mods) in this challenge.

Unless they are actually somehow used to add proper detail to a car, in that case feel free

Does the model name need to follow the soviet format, or can it be a Western car that through some kind of partnership was sold in the eastern bloc, kind of like Fiats?

At first I wanted to have it as a rule, but decided against it. It does not really add anything to the competition and only limits creativity. If you would like your car to follow the format then go for it, but it is otherwise not mandatory

The offroad variant has large arches, offroad tyres and extra bumper protection on the front and rock sliders on the sides

So the news got through that the update might be going into the stable branch today. This means entries will only be accepted in the next 12 hours. I will try to keep the game outdated for the time but after the submissions close I will be reviewing the sent cars (if there will be any more sent further) and letting my game update.

Requisition forms available in Moscow. Get one eventually!

Poland is proud to present the 1956 PMF Karawana and Karawana S (Syberian). Built for the country that once occupied them, it’s Poland’s newest accomplishment.

Photo7.jpg1920x1080 619 KB
Starting with the road version, the first massive issue is the insane terminal oversteer, which appears at the entire speed range, this is caused by the use of the RR setup with the same tire width front and rear. The car uses progressive springs and good safety, which could rather be traded for a staggered tire setup. The car uses downforce which is a majorly questionable option for a car like this. As for the design, the car is pretty well detailed, however line flow and consistency are not a part of that. The car looks different from each direction.

Moving onto the offroad variant, the smaller things to nitpick are the wider wheel arches and different brakes. These might be a decent addition however having to produce different parts that will overcomplicate the production where it’s not really worth it. The gearing is not tuned for offroad, it retains the same gearing from the road car. Lack of additional cooling is a slight hit on both cars. The only drivetrain modifications are the offroad tires, otherwise it is very similar to the base. The searchlight is an interesting addition, however it might not be realistically fitting for the car.

Photo9.jpg1920x1080 651 KB
To start with, this entry did not follow the naming system properly. The base car is using an automatic gearbox which is an extremely unrealistic choice and not only that, it is also not tuned properly, as it uses short gears while not even reaching it’s maximum possible speed anyway, rather than being tuned for fuel economy. Not only that, but the car also runs with a premium interior and advanced 50s safety, this is in no way fitting for the requested vehicle. As the other entry, it lacks extra cooling which is a hit on reliability. Design-wise, the car is pretty well-designed (if we ignore the massive badging on the rear door), however it uses a UAE-style plate for some reason.
As for the off-road car, that one uses a completely different manual gearbox (the question is who is going to produce 2 completely different gearboxes for this car). More importantly, the car uses a clone of the original engine and even though it’s completely the same, that is a breach of the rules of the challenge. The color used on this car would realistically be used only on the most prestigious versions of premium cars in the Soviet Union for high-standing citizens, therefore it is not fitting for a people’s offroad car whatsoever.

Photo11.jpg1920x1080 694 KB
I get that the entire entry is pretty much memeing on the challenge but I’m going to have to review it anyway.
The base car uses a longitudinal FWD system which is an interesting choice, but perhaps not very realistic given the time period and the theme. Again, for some reason this car uses advanced safety when anything below (including none) would be more viable. The rear brakes are some of the smallest brakes I have ever seen on a car. The gearbox suffers the same fate as other entries having been set up incorrectly. Rear leaf suspension is used which is a viable choice, but for such a small and light car it is much better off without it.
The offroad version features completely different rims for larger tires, this might hinder production but might be a good investment regardless. Other than that, the car has quite a high roll angle going over 7 degrees, but it could be worse. Bonus points for going with 4x4 and locking differentials.
As for the design, there might have or might have not been an attempt. The front is looking bearable if we ignore the license plate placement, the sides are pretty much empty and the rear is…

It is very tough to pick out who is the winner here as all entries are unfitting for the categories in one way or another.
I’m going to give it to @mart1n2005 as I feel like more thought went into making this car, even though it is completely undrivable
The Karawana would have been an option to consider were it not for the very expensive interior, which makes it the most expensive car in this round, and unaffordable for the target buyers.
The Blyatmobile is the cheapest car here despite still having unreasonable expensive choices, however it’s choice of FWD is raising questions and the design would be denied even realistically for harming the reputation of the state.

And on that disappointing note, see you in the next episode of EDC…

I liked the premise, and would have taken part, but the deadline was cut extremely short and I don’t have much free time on weeknights. Four days is a really fast deadline for a challenge, but I know the update is looming large over every host’s head.

Yeah unfortunately after the devs had said the update could have gone live today I had to cut it way shorter than I would prefer just in case everything got ruined.

Yay! The least shit car award. I would have just binned everyone lol

Just a note, long-FWD is not that much unrealistic for a small commie car - FSO Syrena* used that since 1957, same for all Wartburgs (since 1955) and IFA/AWZ/Trabant cars (since 1948, but based on a pre-war car).

*- I know, I know, “Syrena is not a car” - Polish petrolheads’ running joke

Well damn I had something in the works but didn’t make the deadline, would have been fun to participate, congrats to martin though for his well thought out and interesting entry

None of the cars listed I can consider as “Soviet Union” cars to be honest, plus most of those cars started using the layout after the time period of this challenge

TBH, I went with Advanced Safety to get the car out of first tier Subcompact. I get that it’s not exactly realistic, but I specifically avoided Adv 50s for that same reason.

I also can’t design the rear of any car, at all, so fair enough.

For this time we will only be looking at the engine displacement column.

Moreover, your engine displacement already got you out of the first group