CSR120: The Funky So And So [Finals Released]

CSR 119
The CSR Rules and Stats

John:
''What happened to your ride?''


Mark looking at this wrecked panther

‘‘Aaaaa… little issue with a grit, look I need something fast… fast’’

John:
''Can't your insurance company get that sorted, man?''

Mark reluctantly explains that his insurance company knows he’s been using it for work and they wont cover any damages caused.


Mark:
''After that incident with the grit, that ain't gonna fly with me no more, I need something more substantial and powerful, I need payback.''


John calling his bud from his office

‘‘Jones? … Hey man, I got a cat who needs a set of wheels, but he ain’t gonna be so easy to deal with, he want’s something specific to his needs, you think you can help him?’’


Mark:
''Tell him, I need a big V8, something with real grunt. A strong large car, might come in handy and I need it to be pretty new and reliable, will be cruising the streets for long hours, can't have it conk out on me during a shift.''


Loosey-goosey rules
(doesn't mean you don't have to follow them, just means they aren't as specific to a number)


Some additions and rule changes will take place soon :)
i dont know what im doing 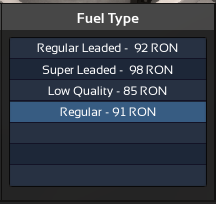 Whoops, sorry. Must have accidentally added un- to leaded.

Just a reminder: Min-maxing ought to be discouraged.

On that note, must the cars be exclusively front-engined? And will FWD drivetrains be allowed? Our client won’t be looking for a 4x4, though.

Yes and he will prefer RWD but FWD is not illegal

if you are doing 74 in a 70 zone, you are still speeding, even if 74 would round down to 70.
doesn’t change the fact that you are speeding.

Are they looking for a manual or auto?

First off:
anything not explicitly forbidden or limited by the ruleset is allowed

second:
said ruleset may be subject to change

You can use both.

I think this calls for the sherdiam

Are V8s a hard-set rule? It doesn’t say so in the rules, but is rather mentioned in the story.

or loud and proud one.