Aw man. I guess the Espada was too lacking in power in the end. I was banking on its fairly low price and cornering oerformance, and even upgraded the engine to DOHC with VVT to give it some extra oomph. Well, it’ll get its time to shine some other day. Maybe a turbo version will be considered in the future…

The next morning, Mike and Francis decided to take one last look at each of the three remaining cars, with the aim of determining a winner. For this purpose, they decided to scrutinize Mark’s findings more closely, and hence know more about their pros and cons. After further deliberation, they were eventually able to settle on a finishing order for the three finalists - and this is where they placed:

At first glance, the URABUS 70ATB seems like the right choice for the lead role, with striking styling and impressive straight-line performance, which particularly endeared it to Francis. However, Mike couldn’t ignore the fact that over 700 horsepower would be overkill for Danny - or anyone else for that matter. This surfeit of grunt manifested itself in a lot of wheelspin off the line - more than was desired, in fact, making low-speed maneuvers more difficult than anticipated. As a result the URABUS 70ATB was relegated to third place, to Francis’ dismay.

The URABUS 70ATB is no longer in contention for the lead role. However, Mike realized that there could still be a use for it… as the car driven by the film’s main antagonist, Hans Kerner - an infamous smuggler and terrorist. He suggested painting the car black, and detuning its engine to make it more manageable. After a heated debate, Francis begrudgingly accepted Mike’s suggestion, before moving on to the remaining two cars.

Mike wasn’t fooled by the Adriatique’s small size compared to the other two finalists. This car was the least powerful one in the top three, but weighed so little that it made optimal use of its relatively modest output. It also handled like a dream, and overall was very good to drive. It was quite attractive, too, but would have been even better, though, if it weren’t under-braked; as such, Mark had to treat it with more care than he’d hoped for. Putting that aside, there was still one outstanding car that kept it from claiming the lead role.

The Decarlis Adriatique is no longer under consideration for the lead role. However, it will be used as Jessie’s car, in the scene where Jessie meets Danny for the first time and introduces him to his new job as an ION agent during the drive to ION HQ in Santa Monica, as Jessie explains the details of his new mission and what is at stake.

No other car nailed the brief of speed, style, handling and prestige better than the Vector XSL 37TT. It was faster than the Decarlis by some margin, and just as agile through the corners. It was also quite comfortable as well, but crucially was not under-braked like the Decarlis, nor was it overpowered like the URABUS. As such, it was more manageable in all situations, especially when performing the more difficult stunts. And as icing on the cake, it was the best-looking car in the top three - even more so than the other two. It was no surprise, then, that Mike and Francis have chosen this car to star in the live-action film adaptation of Operation Incredible.

The Vector XSL 37TT has been chosen for the lead role in the final car chase in “Operation Incredible”.

Operation Incredible eventually premiered on July 7th, 1999 to rave reviews, with critics lauding it as “a wonderful update on a seminal TV classic, with nonstop thrills from start to finish”. In particular the final sequence drew acclaim for its suspense and intensity. The film made Mike Shore a household name overnight and attracted a new legion of fans to the hitherto dormant franchise. It also spawned a highly successful tie-in game, Operation Incredible: The Game, exclusively for the original PlayStation, featuring third-person shooter action interspersed with driving segments.

But this was just the start of the franchise’s rebirth. Four years later, Operation Incredible II premiered to rave reviews, with critics describing it as a worthy sequel to the original, with added intensity. Operation Incredible III, which premiered in 2007, took everything from the previous films and turned it up to 11. The rest, as they say, is history.

As for the Vector XSL 37TT, its starring role in the original film remains fondly remembered to this day; it has been seen as an icon ever since, as reflected in a sales surge shortly after its film release, and more recently by the car’s resale values, which are currently trending upwards. 20 years after the first film premiered, and with a sixth installment on the horizon, Mike finally bought one for himself - in an identical spec to the example used for filming. To this day, he considers the first film to be his finest work, and the Vector to be the best car he has ever driven. 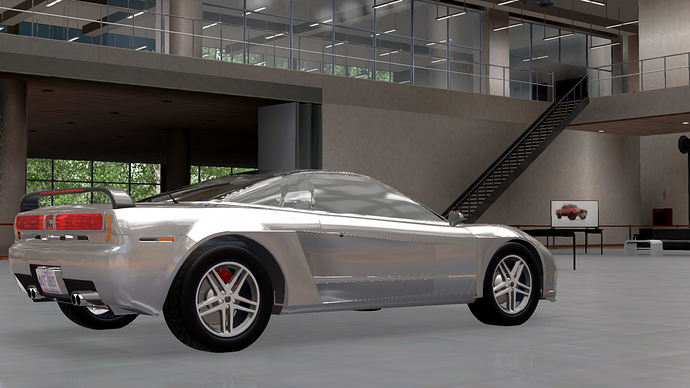 Many thanks to everyone who participated! I hope you enjoyed this round as much as I did.

The final finishing order is as follows:

Whoever decides to host the next round must make a new thread for MCC3, as stipulated in the OP.

Let’s gooooo! That extra effort of styling did pay off in the end. I made sure not to keep any loose ends in terms of power, brakes and suspension, learnt to do so from CSRs. Quite an enjoyable round and very nicely written epilogue, Abg.

I have a few themes in my head but I’m in the middle of judging AGC8. Conan already said he won’t be able to and Arn38fr is doing HHD. I guess I’ll take the responsibility for setting up MCC 3 then, but it’ll take some time.

I never expected to finish in second place! Thank you!
I applied Colin Chapman’s motto: “Light is Right!” to design this car.

@abg7 What did you expect in terms of braking force to find the Decarlis Adriatique’s braking acceptable? Your answer could help me for future car design.

Sorry for butting in like this but I might be able to help here. See sportiness brake fade in a sports car is a complete no-no. You don’t want any kind of fading while you’re driving fast and going through tight bends and corners. Anything above 2% is almost unacceptable for a dedicated sportscar. For your setup, you could’ve gone for at least 3 pistons per disc and about 280-300mm disc size

As an alternative, I came up with the following suggestion:

Leaving all other brake settings as they were previously, I switched to single-piston vented discs all around, 350mm wide at the front and 320mm at the rear. This change only adds half a kilogram of weight, and as such has no adverse impact on performance.

Pistons and quality are best avoided for fade, pads and discs define your fade.

So I hate to be that guy, and know that my entry was binned for other reasons, but:

All other criteria are non-priorities.

and is a fuel drinker

In accordance with my original premise, I have removed any mention of fuel consumption from the preliminary review for your entry.

Yeah but that’s not the point, is it. Because it was said in the review it implies that the car didn’t pass muster because of it. Similar to how it’s said in the review that my car has poor environmental resistance even though the brief said jack about that. Also, it’s said that wheelspin is the reason why my car didn’t do well although drivability is only a minor priority? Considering the sort of stunt movie people are doing I thought wheelspin would be beneficial. Guess I guessed wrong then.

Oh well. Onwards to the next one.

I took a look at its gearing chart, and found out that even with long overdrive and traction control, it still has 9.5% wheelspin, which is still quite a lot:

From my own personal experience, up to 5.0% is acceptable in a RWD high-performance car, above which you start to have problems; above 10%, the car really struggles to get going from a standstill. Much of this wheelspin comes from the sheer amount of torque produced by the engine:

With a peak torque figure of 629 lb-ft at 5100 rpm, it should come as no surprise that the rear tires struggle to cope with all that grunt from a standing start.

You can calculate how much torque the wheels get by looking at the gearing
and multiply the torque rating with these numbers.
(both first gear and final drive)(quite common: 5-10 times)

Here to make a quick note! I’ll be releasing MCC3 within 72 hours. Why the long wait? 2 reasons:
1/ I’m still doing the judgement for AGC8 (though I’m almost done)
2/ Strop’s CSR has pretty much… Hypnotized the community into making a proper land barge. So there’s the hype of that