Your interpretation of a modern Rebel Machine is mostly on point - the Polestar 1 mod lends itself very well to modern pony and muscle car designs. It would be even better if the livery incorporated some more blue to go along with the red and white, though - it would have been even more faithful to the original 1970 design.

You’re right about it. But I have a excuse

The patriot livery was an afterthough. Initially it was going to be a standart paintjob. That’s partially why the hood is black, as the std painted ones were. When it was almost finished I felt the car was too bland on the sides and added a simplified livery, and the faux side scoop that the rebel hadn’t but a lot of muscle cars had. I’m still bummed I couldn’t figure out a way to make the quarter windows more like the rebel. Tried for a good pair of minutes.

BTW, I’m making a 1968 version of my Haulers Badge line (Will only do the 69 as it appears in Street Legal when we have a 69 Charger body) and this Rebel may receive a parent version to become the 2020 Haulers Badge, as a coupe, the way Jesus intended when He was building our hot rods.

Well, here’s my take on the topic.

But this is no standardmodel, this is the top range turbo model, which has the previously mentioned 2,8 litre turbo V6, and XWD system from the 9-5, giving this car a 5.5 second 0-60mph in 2012, while maintaining a top speed of 260kph, limited.

The interior would be similar to the 9-5, sharing the entire gauge cluster, steering wheel, center console, and seats.

The exhaust has bypass valves, which activate when the car is put into “S” mode, giving it a more lively sound, with the S mode on, the traction control would loosen up a bit, and the steering will do the opposite.

I added the turbo badge from the original 900 turbo as a throwback for it.

What if Delahaye made cars today?

Hadn’t found this thread the day I’ve made this monstrosity. What if the C2 Vette was mid-engined? 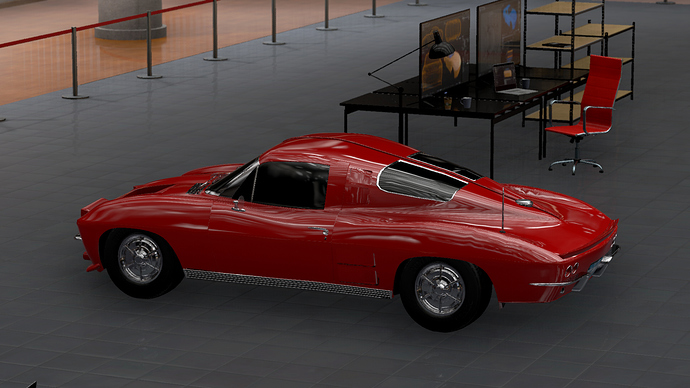 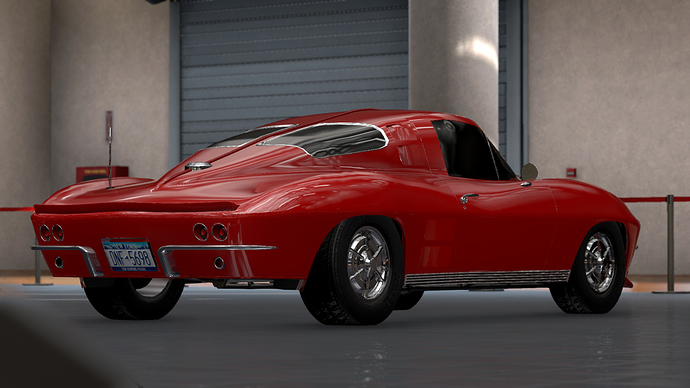 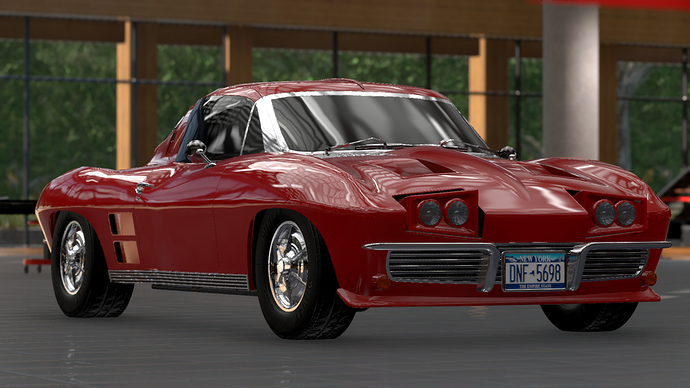 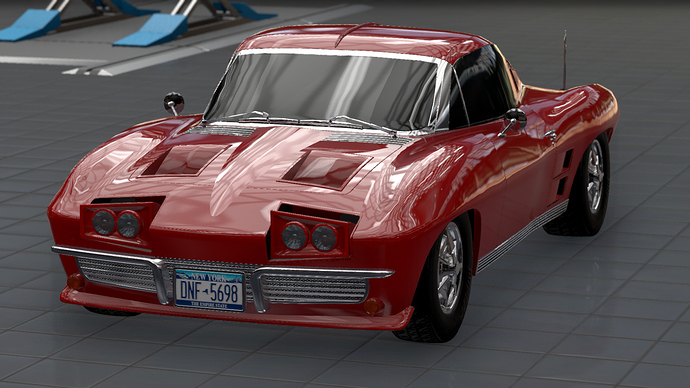 It looks like it’s about to have a meltdown and cry it’s oil out.

The proportions seem off by a long shot, but the fixture placement doesn’t help either.

no offense, nut that is a disgrace to the c2.

What if Polestar made a supercar?
enter… 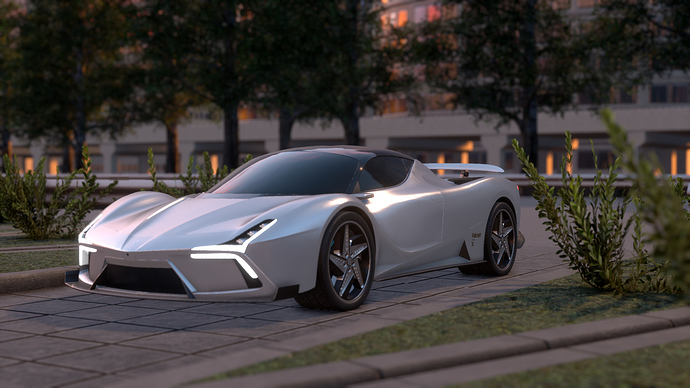 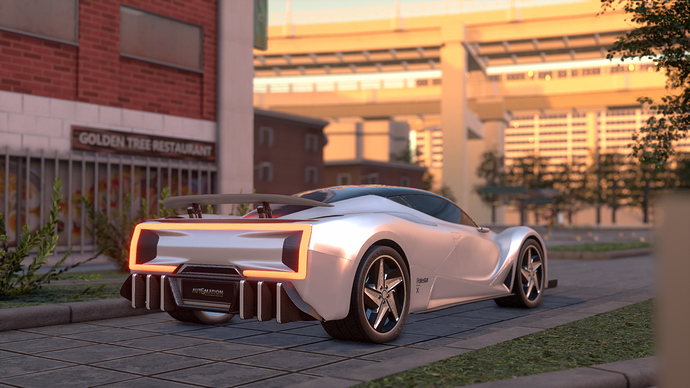 yes i made this ages ago for avcm

fashionably late as ever… On the penultimate day, a Lolvo FH16 shows up to the meet, hauling an unmarked white trailer… [Photo28] This isn’t just any stock FH16 though… 2020 Lolvo FH modified by FB Trucks [Photo39] This truck has received some aftermarket goodies courtesy of @Fletchyboy100’s FB Truck Products, including front and rear lightbars, aux lights, antennas, horns, and fancy new chrome wheels. Performance is kept the same however, with a 16-litre inline-6 producing 750 hp and 3550 …

“Mini” have long won their army of fans. But what if they released a risky mid-engined sports car?

It would make a Mini Runtamer!

The engine is straight from the Cooper JCW GP, which produces 306 hp. This allows the lightweight coupe to accelerate to 100 km / h in just 4.9 seconds. At the same time, the emotions from driving cannot be described in words. It’s best to experience it yourself.

In the real world, Sarao Motors made jeeps and only jeeps. In this scenario, some accident by the founder in the 1970s forced them to obtain outside help, and the help is of all companies, British Leyland. They did well, relatively well as the only Filipino-branded automaker (unless VariationofVariables will add Quezon Motors) that mass produced cars on license from BL and later Rover Group until the 1990s (they later switched to some PRC company for guidance; the 60-40 Philippine law limiting foreign ownership of a Filipino company remains in force). This is the second generation of locally designed Sarao Motors vehicles, the C17, designed as a midcompact car for families.

Enter the 1967 Mazda Miata. Codenamed the N0, this model slots between the Mazda Familia coupé and Cosmo Sport. Utilizing a modified version of the Familia platform, the FR design has wishbone suspension up front and a coil-sprung solid axle in the rear. The car is powered by a 75 PS 1.5 liter SOHC inline-4, sending power through a 4 speed manual. Flowing lines emulate those of the Cosmo whilst staying true to the original NA Miata style as well as taking some inspiration from the NB Miata and Luce R130. Unfortunately, I wasn’t able to get the weight down as low as I wanted to with this body - I was aiming for at under 1000 kgs, at least - but regardless it’s still a fun car to throw around, if a little less competitive than its rivals because of its underpowered engine and higher weight. 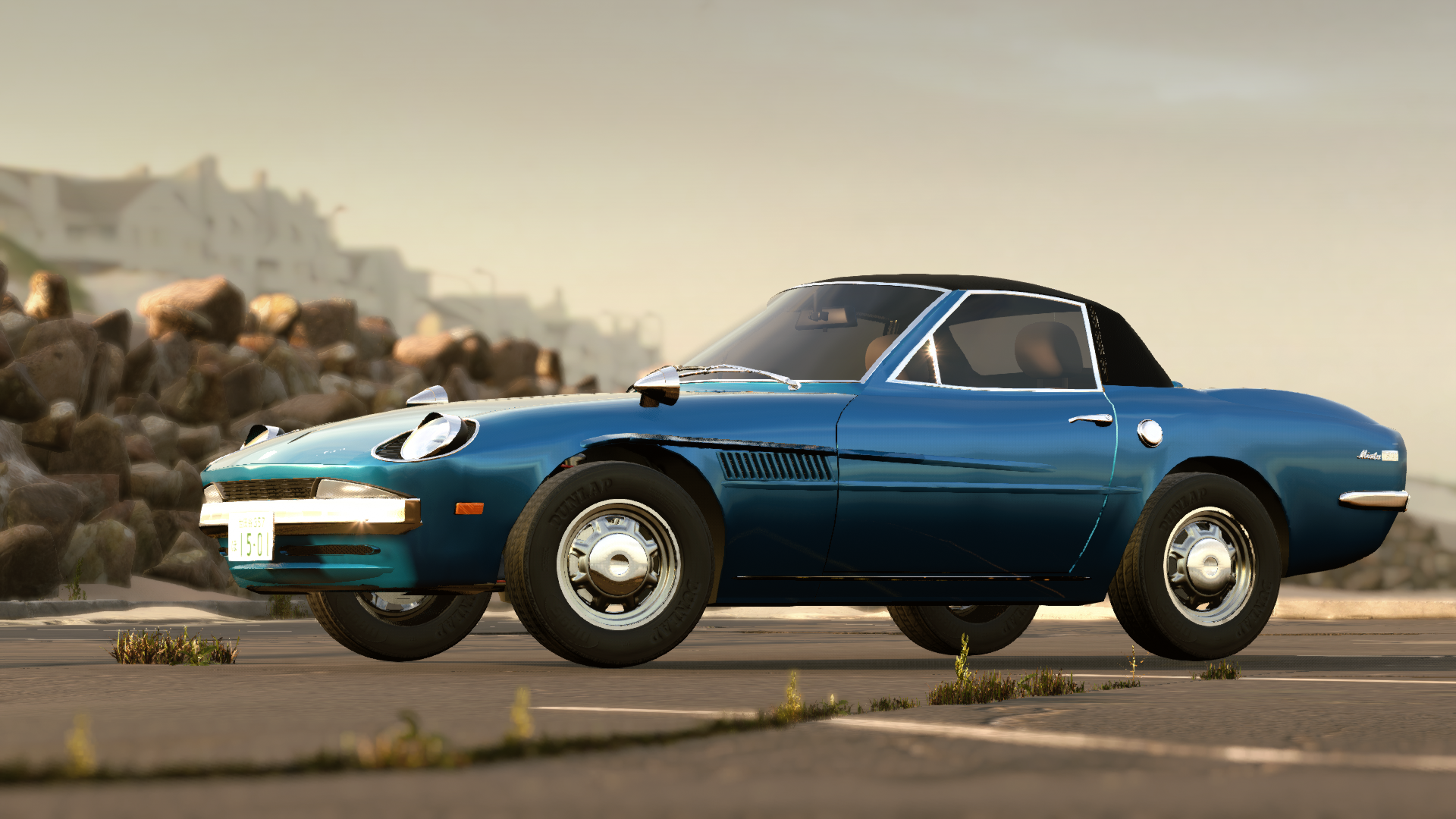 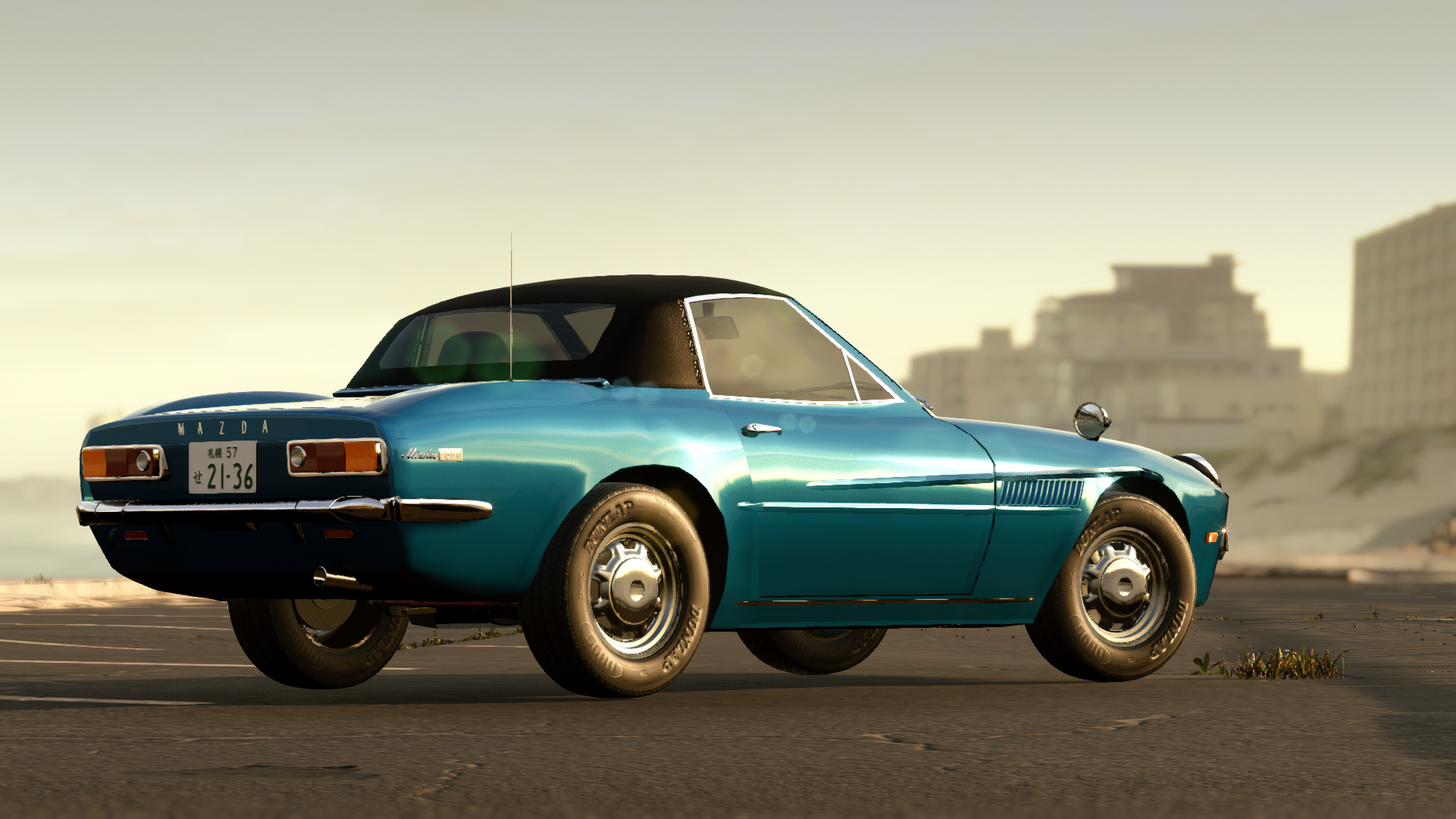 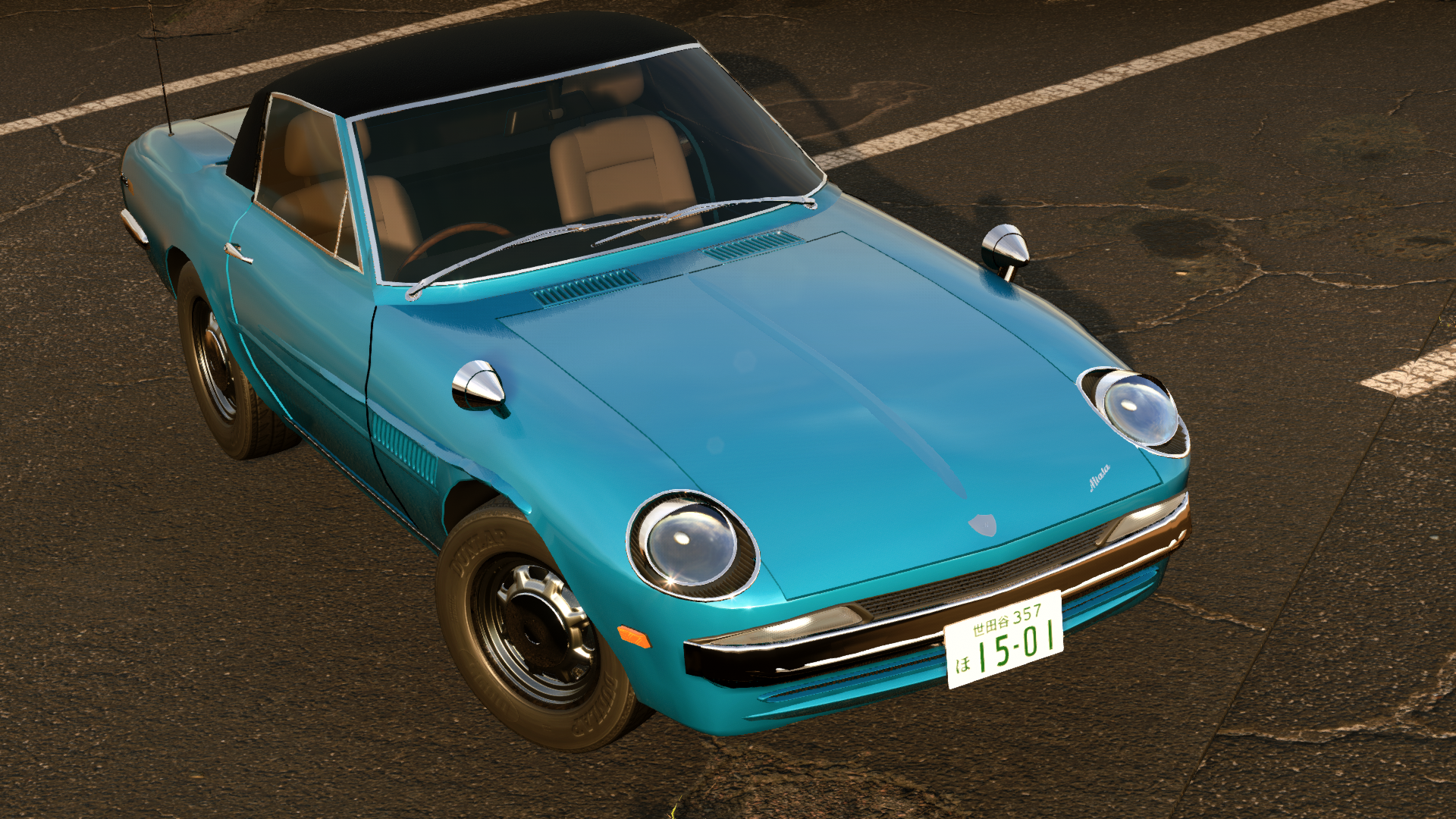 Wow, this is really well thought out and I love how you took the effort to ensure the Miata fitted correctly within the existing Mazda line-up. I suspect your performance issues arose from the body you chose and sticking strictly to the what if? scenario. If the car’d been made to take on British rivals of the day I’d suspect they’d have used a 1.8 or 2.0L four instead of the 1.5L you used, hahaha!

Nope. The Lotus Elan was the inspiration for the RL Miata, this car would have had to fight Triumph’s, MG’s and Austin Healey’s; the Elan would have been in a totally different price bracket to an old school Miata…

Excellent answer to a seldom-asked question - and a stunner from every angle as always! Even the fact that its high drag coefficient holds it back stats-wise can’t stop me from admiring it for hours on end.

If the car’d been made to take on British rivals of the day I’d suspect they’d have used a 1.8 or 2.0L four instead of the 1.5L you used, hahaha!

That would have given it more power, but also more weight, which compromises dynamics. Even so, despite only having 75 horsepower, it would still have made its mark on the entry-level sports car scene of the Sixties.

MCF 2020-11-28 11:11:52 UTC #98
WHAT IF...
FCA DECIDED TO BRING US BACK THE DELTA INTEGRALE ?
Yes, I know, I know, today's market is full of hot hatches, but that's a type of car which we'll never get tired of, especially when under the hood there's a 300+ horsepower inline 4. So, let's say that FCA decided to bring back Lancia to it's good old days, beginning with getting rid of the Ypsilon and presenting the new 2021 Delta HF EVO IV.

HiResPhoto2.jpg3840x2160 555 KB
The reference to the first '90s is strong, but that's not a modern replica. Nothing that special in design terms, because it's still a quite compact car with 4.1 meters of length, 5 seats, navigation system, touch screen and all you need in an everyday-car. The engine is the famous 2.0 GME engine by FCA, used by lots of models, Giulia Veloce included, which delivers 280 hp (206 KW), but Abarth brought it up to 305 (224 KW).

The car weights 1471 kg, but for being AWD and considering the average weight of cars such as the Golf R, it’s pretty ok. Performance-wise, the EVO IV boasts a 5.1s in the 0-100 km/h with the standard 6 speed manual gearbox, which become 4.7 with an all new 7 speed dual-clutch, developed specially for the high-end models of the new generation of Lancia. 262 km/h (163 mph) is the top speed.

During a secret test ( now not anymore) at the Top Gear Test Tra…ehm… sorry… Airfield Test Track, the Lancia did a 1.24.12, which is, to giving you a benchmark, 1.5s less than then a Civic Type R FK8 and only a second slower than the Supra MkV.

As a direct result of the body’s size and weight, technically no - that being said, if there was something a bit closer to the Elan in Automation I would’ve definitely opted to use that.

If the car’d been made to take on British rivals of the day I’d suspect they’d have used a 1.8 or 2.0L four instead of the 1.5L you used

I based my engine specs off of the Japan-market Mazda Luce, which was released in 1966 - that being said, I should’ve done a little more research because I didn’t know there was a version of the engine with twin carbs which was released in 1967. That probably would’ve made it a bit more competitive power-wise in the grand scheme of things and I might still throw that version in for shits + giggles.

It’s the people’s favourite(?) Audi that is popularly known as it has the same engine as Lamborghini Gallardo in the 2000’s but what if Audi made Audi R8 back in 1989? Here is the result.

Powered by 4.2 V8 ABH V8 that was previously in Audi V8, Audi decided to give it some upgrade up to 296hp, 410nm of torque, mid-transversely mounted in the car this body doesn’t like mid longitudional V8, had to resort to tranverse powering the rear wheel only.

It’s one of the best designs I’ve seen around, super creative.

It’s a shame that the side intake fixture is a bit bugged out with the lighting, but otherwise stunning car.