I agree with you on the quitting; if you’re not enjoying it, don’t force yourself. (And Cyclists certainly isn’t a game for everybody. I’m enjoying the competition well enough, but I probably won’t ever play the game again once it’s done.)

That said, I wouldn’t recommend you “withdraw your name” from the competition. The way it’s set up, you don’t need to finish the last 2 challenges to place; rather than let those 3.7 hours go to complete waste, it’s probably better to take the 2 zeros and see where you end up. Plus, you might still be able to enjoy and/or learn from the automation races… 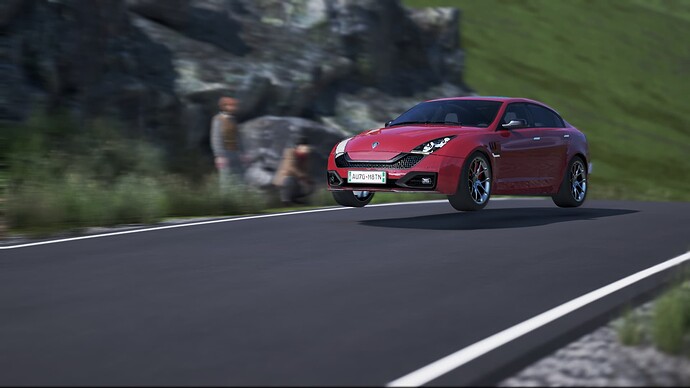 Round 4 Image1920×1080 74.7 KB
One of the competitors getting some air as a couple of spectators watch on the first stage of the Monte Vias Rally.
Automation Results 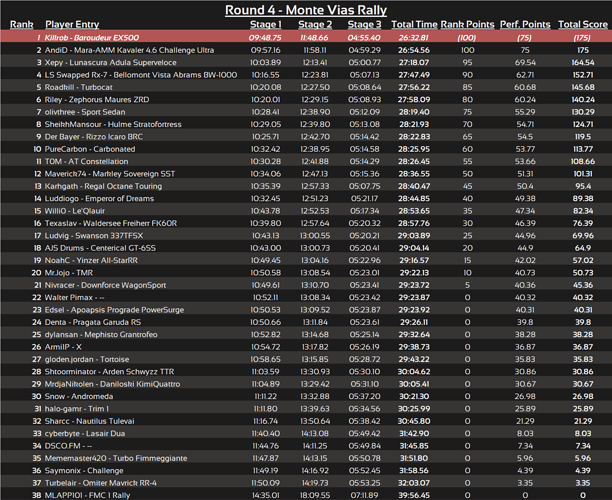 The various stages of the Monte Vias Rally were a huge challenge to the contestants, demanding good low-speed agility and excellent acceleration statistics, at the expense of top speed. The length too of the events were particularly grueling, testing the endurance and concentration of the drivers as they made their way over the treacherous alpine and sub-alpine roads in and around Monte Vias.

@killrob took top honours comfortably, the Barodeur EX500 comfortably faster than @AndiD’s Kavaler on the first two stages, though both were relatively evenly matched on the short third stage. Times remained tight through the rest of the top 10 and beyond, with only a minute between Roadkill in fifth place and @Texaslav in 16th place. @Der_Bayer had a much-improved run here, the Razzo Icaro proving to be quite quick on the first and last stages respectively, just enough to edge out PureCarbon for 9th place. 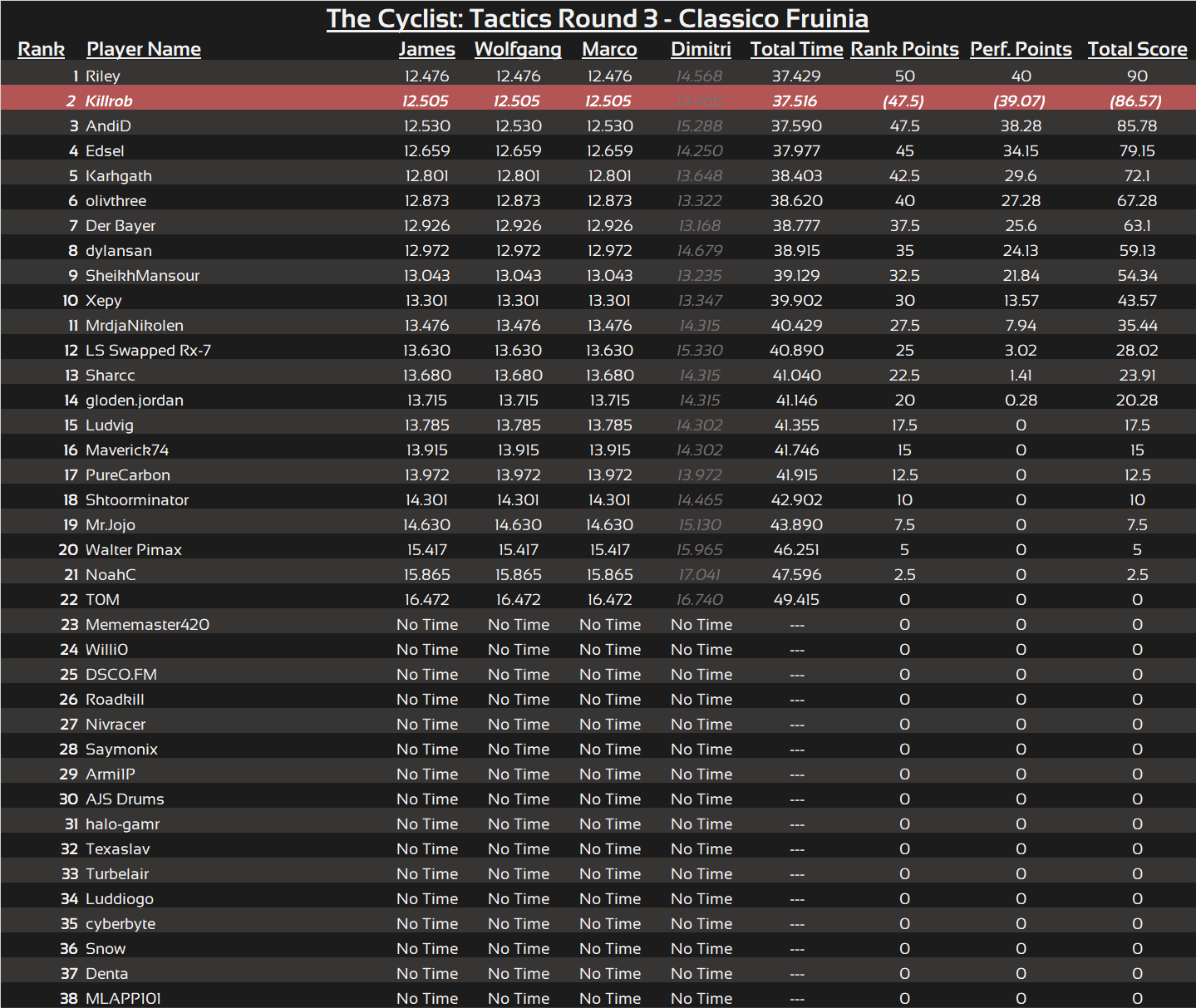 Shock and awe at the results of the Classico Fruinia, as @Riley dethrones Killrob at the top of the standings, finishing a tenth of a turn ahead to take the top spot…well done to him! AndiD had yet another strong outing, finishing just behind Killrob in third place, while @Edsel massively improved over the last run, finishing an extremely competitive fourth place ahead of @karhgath and @jooliv, continuing their string of excellent results.

FInally, a big congratulations to @LS_Swapped_Rx-7, for winning the random draw for a $25 US Steam gift certificate for completing the Classico Fruinia! 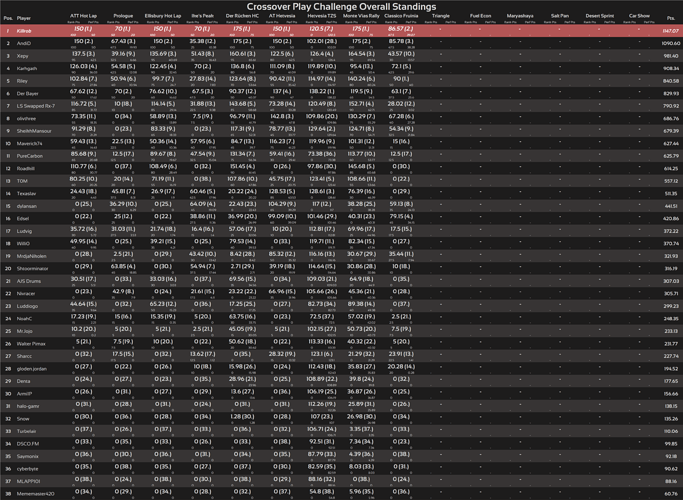 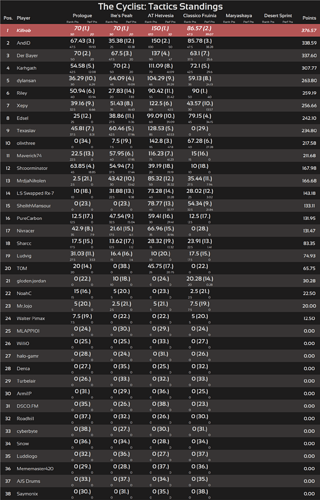 AndiD leads the field the field comfortably after the completion of Round 4, a strong showing in both events helping them open up nearly a 110-point lead over @Xepy in third place. Der Bayer slips a place to Riley, after the latter’s excellent result in this round, and jooliv bursts into the top ten, their string of excellent results paying off in a big way now. Killrob was unable to pull further away from AndiD in the overall standings, after the latter’s return to form in Fruinia, and many other contestants have stayed within striking distance of a top 10 finish overall.

In the Cyclist standings, AndiD now leads the overall contestant standings over Der Bayer, taking a 1-point lead with this round. Karhgath remains close behind in third place, being only one bad result from the leaders away from first place.

From Monte Vias, the challenge heads north and east, to the hot, dry steppe of Archana, and one of the most demanding and challenging events of the entire competition; the Maryaskaya Triangle. The Archanan government kindly shut down parts of their highway system for us to host this round of the competition, where contestants will contend with high speeds and poor-quality pavement, to see who has the fastest, most stable car at high speed.

On the Cyclist Side, the competition heads even further north to Yanagrad for the second of the two “majors”, where a series of long, demanding time trials begins, that will ultimately have the riders re-unite with the cars in the capital city of Kronagrad.

4th place what the-

Okay, I guess watching each of Killrob’s videos is paying off; Never expected to be this good at a game I’ve never played. Maybe I actually have a shot at the top 10… heck, I’ve been blessed with 420 and everything!

Hey, my car did well on the rally neat, light weight RR layout and mechanical grip finally pays off

Eagerly awaiting the fuel economy results, hope I get the Hans-Dieter Krause stamp of approval

Learning TCT was fun too, ended up buying the game and running a campaign

Damn, running the last stage as an ITT by accident in the end cost me quite a lot of points (my average time of the top 3 riders was actually better than Killrob’s, I just forgot that the times are not just added up…) - it really has become very close, so any error now really hurts!

And the worst is yet to come, as will definitely lose more on the next stage, with multiple turns separating me from Killrob due to an overly conservative beginning of the first stage, from which I could never fully recover. There was just no way to spend the saved attack points without running into bad terrain ot losing somebody on the way. So well, congrats to whoever wins! It was a fun ride!

That is a shock! Mostly luck, but hopefully I can remember how I played it out so I can do it again

Glad to close up the gap, but still need good results if I’m going finish higher

The final TCT event for the CCPC is now live.

This is a short and super fast one with just two flat stages (one TTT and one ITT) and no technical sectors - they have proper roads in Dalluha, you know! Only the rider with the fastest overall time counts. A little reminder for @Der_Bayer that he doesn’t forget three riders count in any TTT.

Great to see @Riley beating my time on the long Fruinian TTT. We shall see if the hardest of all the TCT events, which just closed submissions, will have more players surpassing the benchmark times.

I have prepared a video for that, as per usual, and I was struggling with it for sure! 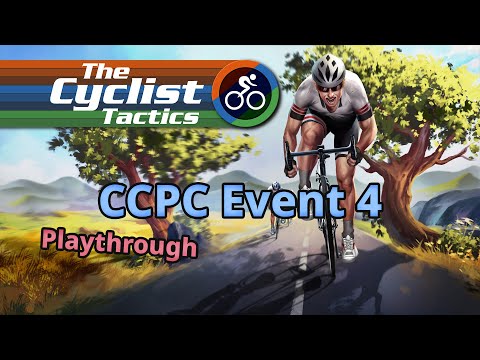 Off to racing the last event myself now. May the speediest win… (the anti-Wolfgang!)
Cheers!

This is your last chance to score some points in The Cyclist…will it be enough to push you into the top 10 or not? Only one way to find out! 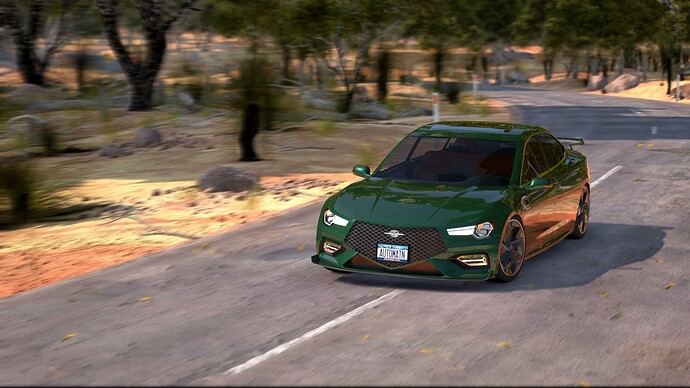 Photo51_1,920-1,0801920×1080 171 KB
One of the competitors cornering hard, as they make their way through the dry valley of the Maryaskaya Triangle course.
Automation Results 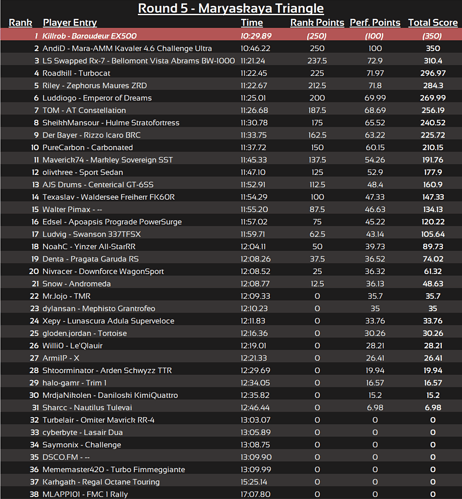 The three track segments that made up each of the three “legs” of the Maryaskaya Triangle were very different from any of the previous tracks in the Crossover Play Challenge; Legs 1 and 3 emphasised top speed, good driveability and good high-speed cornering characteristics. Leg 2 was still quite fast, but was more medium-high speed cornering. All three tracks had very high surface roughness, which brutally penalised cars with very high sportiness, in relation to their driveability, as evidenced by poor @karhgath in this round.

@Killrob took the top spot, pretty predictably on account of his car being so powerful (and so exploit-y

), with @AndiD surprisingly close behind in second place. @LS_Swapped_Rx-7 had their best finish of the entire tour, finishing a very respectable third place, just a second ahead of Roadkill in fourth and @Riley in fifth place. luddiogo surprised the field in sixth place, their car dealing with the rough, uneven pavement of the course with ease. 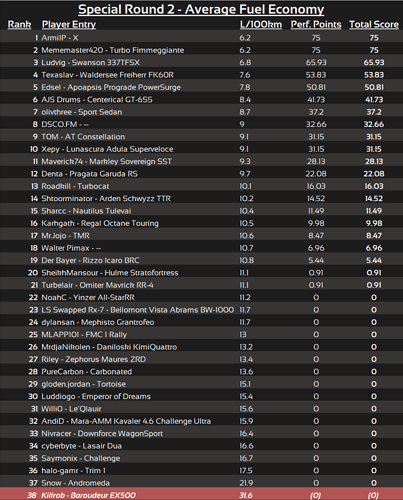 Where’s the red, you might ask? Right at the bottom!

As Killrob said, “with great power, comes great inefficiency…” and that’s where he ended up! @Armi1P took top honours with Mememaster420 for fuel economy, putting up an impressive 6.2L/100km for their entries. @Ludvig took third place at 6.8 and @Texaslav fourth with 7.6, both of those two cars likely having the very best performance to efficiency ratio of the entire field. 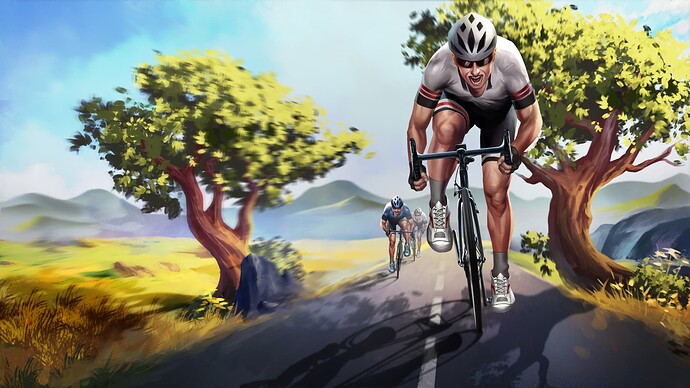 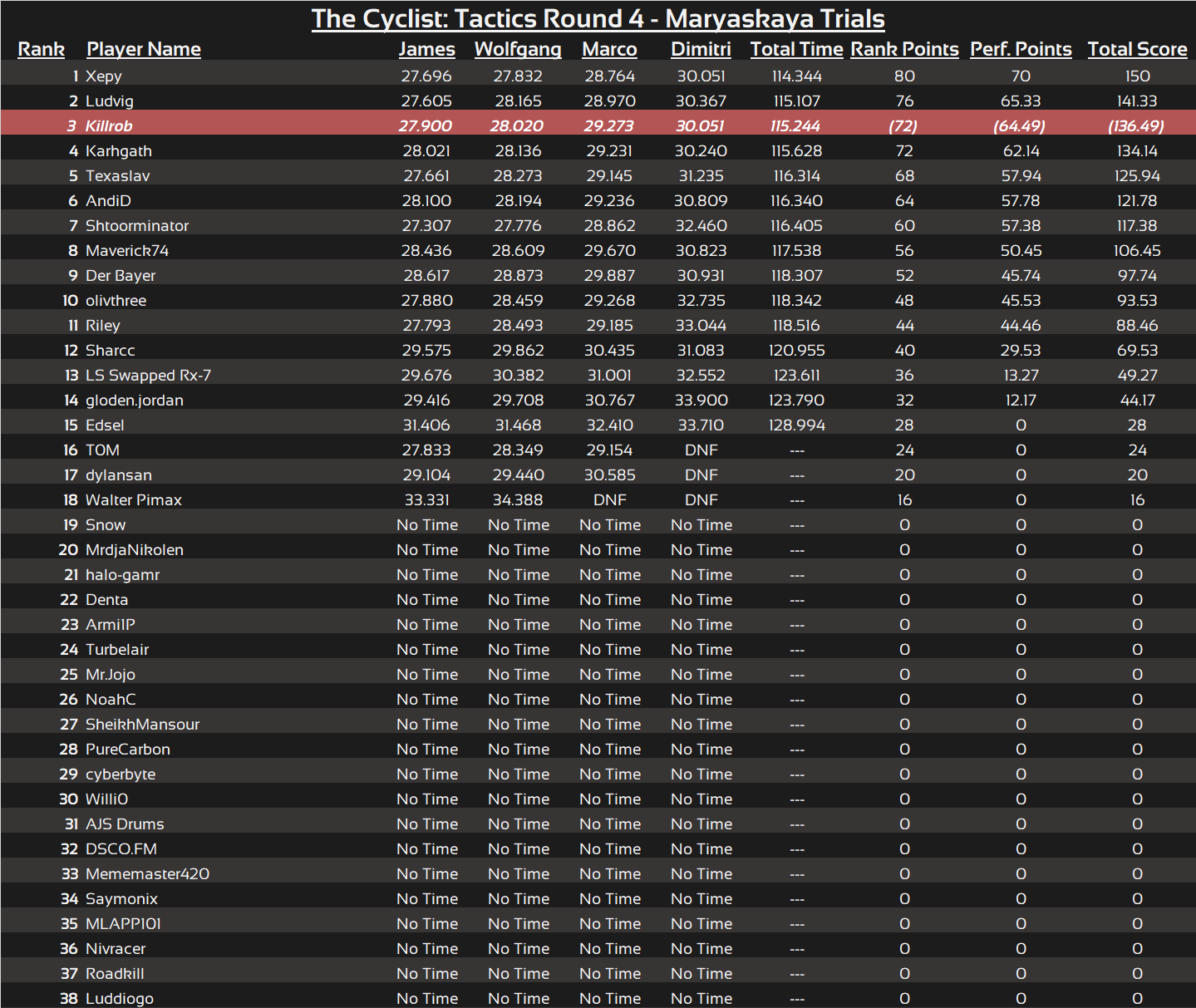 The Maryaskaya Trials was maybe one of the most challenging and demanding of all the races in this challenge, requiring contestants to very carefully balance attacking right now, versus holding back and saving something for the final stages. It proves too, that even the most experienced players can make bad decisions and pay dearly for them. @Xepy took the top honours with a frankly ridiculously good time, finishing almost a full turn ahead of second-place @Ludvig, and soundly beating even the mighty Killrob! Despite their struggles on the Triangle, karhgath finished right behind Killrob, barely half a turn out, with @Texaslav and AndiD in hot pursuit. @Shtoorminator had an excellent showing in this round, as did sharcc and gloden.jordan, both contestants matching or beating their best results of the challenge so far, well done to them!

Speaking of @Shtoorminator, a big congratulations to them for winning the random draw for the $25 USD Steam Digital Wallet Code for this round! 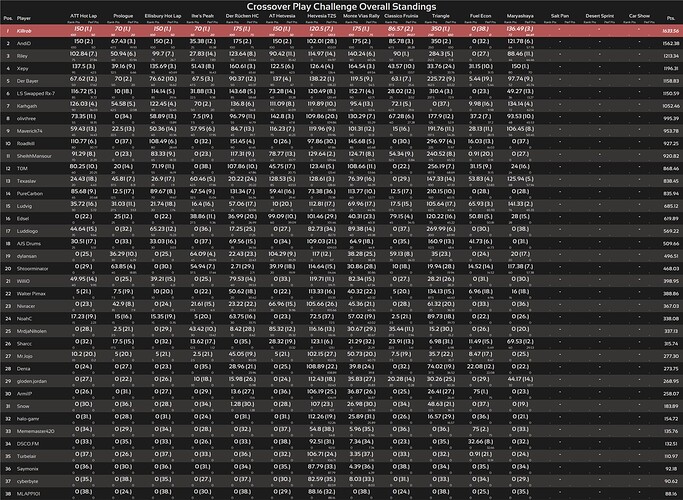 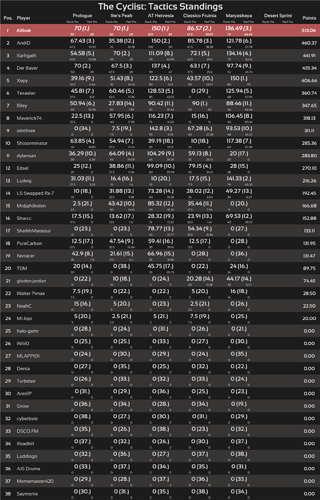 @AndiD leads the contestant field in the Cyclist as well as overall, with a 350-point lead over @Riley in third place. @Xepy, @Der_Bayer and @LS_Swapped_Rx-7 are both hot on Riley’s heels, with only 60 points separating third place from seventh place. @Karhgath sits somewhat comfortablt in seventh place, 60 points ahead of @jooliv , but the race for the final three spots of the top 10 remains close as ever, with a spread of 160 points covering eight through fourteenth place.

@Der_Bayer has tumbled down the rankings in The Cyclist standings, with @karhgath swooping in and snatching second place away. With only one round left, only 19 points separates @AndiD from karhgath, with Der Bayer only six points behind in third place. @Xepy is very close behind too; with another stage victory, they could completely upend the final results!

My Clasico results still haven’t turned up? Shame. I seem to remember doing pretty well on that, too.

Nothing, unfortunately. We looked high and low for them and they must not have come through at all.

Wow, that has got to hurt! Régal will have to fire a bunch of engineers after that debacle

So basically I got reverse-

That is a fun discovery, at least you can use my car as QA benchmark to debug that issue

Well, c’est la vie. I never had a chance of winning as I submitted a total road car; if my car were competitive on the tracks, I might have been more sad about it

has the worst round so far
Jumps to third overall

Thank you to everyone who participated in the challenges in The Cyclist!

Seeing all bits and tricks that made Killrob’s car be so overpowered I realize how I messed my own car with my thinking. For example I recall noticing that standart intakes weren’t too limiting compared to others (while beeing much quiter) and still going for more perfomancey ones just because “it makes so much sense”. And than it turned out that the car isn’t even fast neither on straights nor while cornering. Brilliant engineering right there!

does killrob takes the price if he get 1st place? or will it be past down to the 2nd place?

killrob is not officially competing, notice how second place always gets max score if killrob gets first

That is correct. Killrob gets scored compared to everyone else so that I can rank him properly, but the actual competition points that everyone else is being ranked with are done without him in that field.

Even if Killrob “wins” the competition, he will not take one of the prize winning slots.