Garcia is a small island nation, recently wracked by the hunger pangs of open warfare, who love all things automotive. They host an annual race where 1400cc cars compete for glory and the exclusive opportunity to sell product with the coveted “Race Leader” tax stamp; sales of the winning car are tax exempt for the next year!!!

Due to a lack of foreign interest, the Bgliq automotive company has had a stranglehold on the Garcian market. Basically, other than trucks, vans and heavy machinery, the country is awash with obnoxiously blue small cars; all powered by ubiquitous 1400cc capacity engines.

You, as a representative of a niche start-up company, are going to redress this disparity. You will identify a niche product, select a bogliq engine to power it, then build a car that scores in that category as high as possible as cheap as possible!

NOTE: This is not official Garcia lore. This is a continuation of my Generations II lore that has maintained a Garcia export program, because it was fun.

OK, now for the rules.

Step One: Choose a market

The available markets are as follows:

1 - A niche sports car. Focus on the Light Sport, Convertible Sport, or Budget Sport categories. Bogliq does service this market after 1977, but the car is (possibly) pricey and is also slow! Your car MUST be really good at handling and be fun to drive.

2 - A hardcore off-roader. Aim for Off-road and off-road utility. Bogliq has never serviced this market. Garcia has lovely mountain passes that are an off-roading dream, so the of-road drivers club would LOVE something that could hit the trails better than a jacked up Bogliq hatchback!

3 - Miscellaneous Niches. This is a catch-all category. Mainstream choices WILL be disqualified, so think locally. A MPV for shuttle bus companies? A ultra cool convertible cruiser? A supercar? (!!!). If you choose this category, the limit is your imagination and some engineering constraints, hahaha!

There are three engine options, two of which are constrained, the last is more open but riskier…

1.4L inline four, cast iron construction, 91RON fuel. You are being supplied this engine as a modified “Short Block”; you can vary the cam slider, fuel to air ratio, ignition timing, rev limiter and intake and exhaust options. This includes adding a turbo.

You CANNOT change the bore, stroke, compression ratio, piston type or conrod type or any quality sliders on the upper and lower engine since you’d have to open the whole engine and rebuild it to achieve this…

1.4L boxer four, cast iron construction, 91RON fuel. You are being supplied this engine as a modified “Short Block”; you can vary the cam slider, fuel to air ratio, ignition timing, rev limiter and intake and exhaust options. This includes adding a turbo.

You CANNOT change the bore, stroke, compression ratio, piston type or conrod type or any quality sliders on the upper and lower engine since you’d have to open the whole engine and rebuild it to achieve this…

Option 3 - The “Built not Bought” option.

1.4L inline four, cast iron construction, 91RON fuel. You will be financing the installation of new moulds at the local iron foundry (every country has these industries, right?) using the technical package of the venerable “C Series” engine, which powers about a third of the Garcian car fleet. You are free to adjust whatever you’d like on the engine variant tabs; just stay at, or below 1400cc…

Judging will be as follows:

2 - The dollar value of the car will be divided by the modified desire rating to determine the dollars spent per desire level rating. Those who choose option 3 will incur a 10% increase in their base car price to reflect the extra stakeholders in the deal. The lowest dollar spend per desireability scoring project will be greenlit by the GCAV and that company will be the winner!

(OPTION): The winner can then opt to immortalise their creation with a Bogliq joint venture!

I would like to open the floor for rules discussion and allowing of any objections.

Then, at the latest, on the 12th of September the competition will open and cars can be submitted. I’ll allow 2 weeks for submissions then the books will close on the 26th of September. Please note: Until I post that the competition is closed, SEND IN YOUR ENTRY!!! Don’t hold off because of the date; just send it in and you’ll be included. If you have something ready and the post comes up, still submit!

Your submission will involve the following:

Please make a clone of the supplied engine and modify that. Otherwise you’ll delete each other’s engines and Killrob will be sad because you didn’t use his cool (and convenient) engine cloning function!

Any entry in breach of any of these rules will either be asked to re-submit or will have their car altered to comply, but with no re-tuning (other than to get rid of oversteer, I will be harsh in the use of swaybar and it’ll be sub-optimal, hahaha!).

I reserve the right to alter rules after the tweaking phase if entries show any weird anomalies and any affected entries will be given plenty of time and leeway to re-submit.

In order to avoid claims of bias, DO NOT state your willingness to be included in my Generations II lore until after the judging process is over! It’s unlikely anyone will even want to take up the option, but if someone does… Wait until the end, hahaha!!!

EDIT: Added banned car list and clarified what can be changed on the Option 3 engine.

EDIT: Clarified engine choice flexibility rules, wondered if it’s still early enough to hand the round over to the second placed forum user from AEC#6!

Nothing has been mentioned…so…can we?

@Jaimz, Turbo’s are fine and make sense if you’re aiming for certain categories.

@Sky-High, the engine variant should match the trim so change it to 1980.

I’m assuming they can be either two-way or regular three-way, depending on lore - high-flow three-way items are not available before 1984.

Correct, although the 2 way cat will kill any chance of success IMO, hahaha!

The 80’s cappuccino body, which should really be a 85’s body atleast for it’s looks, has much higher stats than the other bodies that I tried (and a lower drag), would it be considered as banned or is it feasable?

I’m talking about this body.

Yeah, that seems to be a meme, so this body is now banned!

Thanks @Sky-High for being honest and letting me know; it would have been boring to review nothing but coffee cups, hahaha!!!

The NX mod body should also be banned - it does not generate any lift front and rear, and looks too new for 1980 even without fixtures. 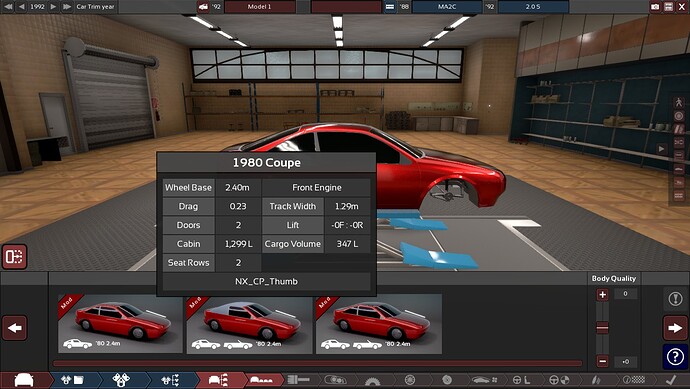 Sounds like a plan. The NX body is also banned.

New rule of thumb: If it looks like a 90’s car (like mid 90’s, not a late 80’s body that survives into the 90’s) then it’s banned. Lore reason, you don’t have a futuristic designer so you’re copying what’s kinda current, hahaha!

No, Bogliq USA hasn’t started using those gearboxes yet, so you don’t have access to electronic controlled automatics yet…

None of the images, on the forum, are high enough quality to make out…I haven’t done an extensive search…

Can we change the head on the C series (before I send in an illegal engine)?

Can we change the head on the C series (before I send in an illegal engine)?

I’m going to say no, simply to keep option C from being too OP. But if I do a part II and this competition is won by an option C build then I’d allow a DAOHC conversion then.

The Bogliq badge is an owl, specifically the sideways looking owl. I will post a pic tomorrow for you,

Here’s the Bogliq badge… I usually mount it in the circle or square badge mount.

My car’s ready… Or do we wait for more rules?

My car’s ready… Or do we wait for more rules?

Don’t forget to post a pic of your car and what market you’re aiming for!!!

I think it’ll be interesting if you’d also include your inspirations for your car, but how much you write is up to you, hahaha!

We are a small startup sports car manufacturer and here we present our first car.

This car is 2 seater, mid-engined light sportscar powered by a Bogliq(esque) 1.4L Boxer 4 engine, which sits happily at the back powering the rear wheels. The engine has been turbocharged which brings the powerplant upto 110hp@5600 and 147Nm torque@4600.

Chassis is a spaceframe with a body configuration that may look a bit like the FM Cerberus…although that’s just a happy coincidence! 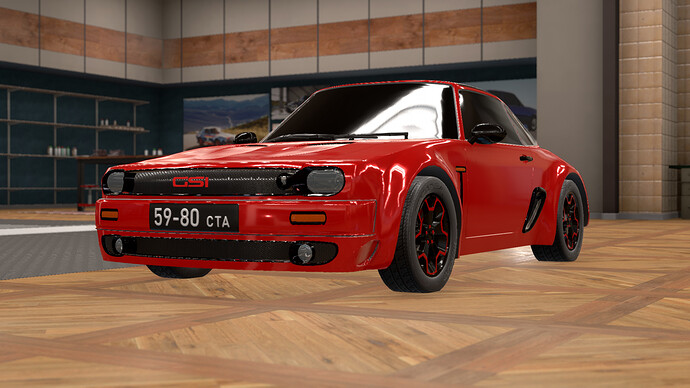 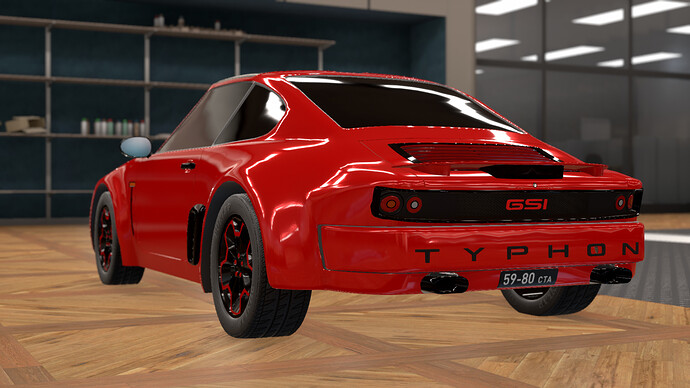 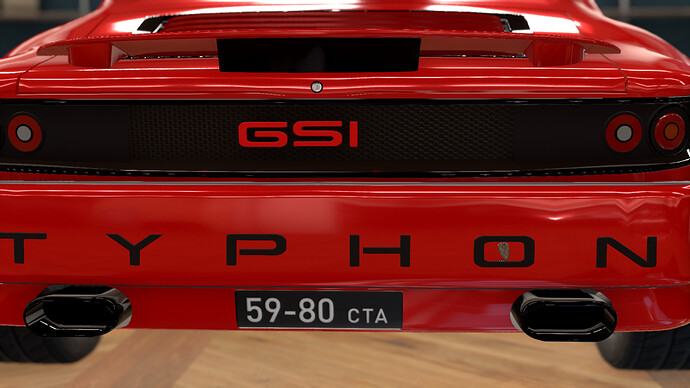 Had to edit because, upon checking, I found that the pushrod head had turned into DOHC…

…it’s not BAD but it’s just not as good.

At MAHG Engeneering Solutions, we propose to Bogliq to fill up a particular niche! 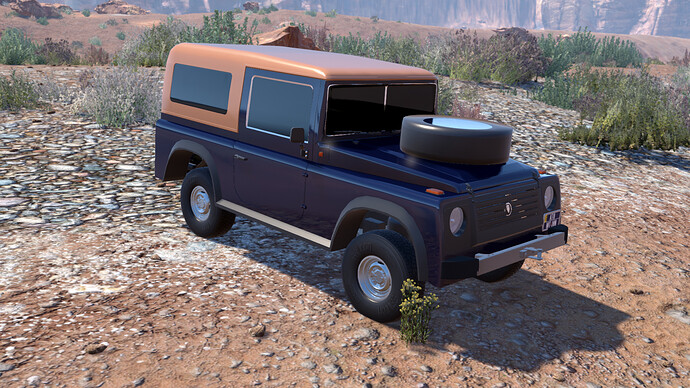 Using the C series engine, this truck costing 11 100 D will be the perfect vehicule for the B.Off-road market! 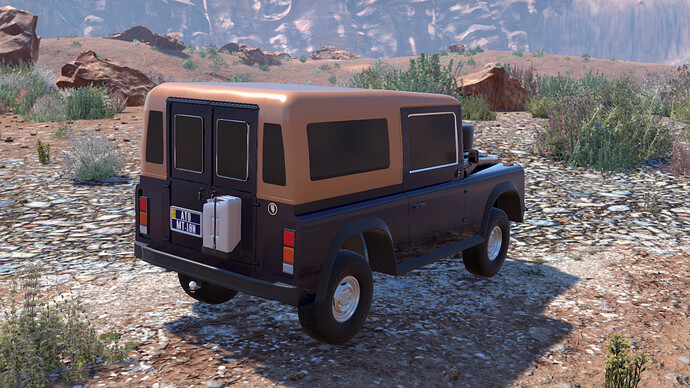 This super-reliable car is quite economical as well and comfortable thanks to its 3spd auto box + locking diff!

I’ve skimmed over the first couple of entries, nice job BTW, and I’ve spotted an issue that I’m going to fix by modifying the rules slightly…

Everyone please continue to nominate your target market as per the rules, however if I find another related category that scores higher than the nominated category, then I will score the car on the higher scoring category.

Both current entrants will receive benefits from this change so no-one needs to panic and re-submit, hahaha!

Also, I apologise that this round became more complex than I originally promised. I got carried away making the competition fit lore and lost track of keeping it KISS, hahaha! Hopefully everyone’s enjoying the challenge as it is, but I’ll be more careful of my ruleset complexity in the future…