The brief for this challenge is simple. It is 1970. Make an affordable sports car in the style of the example vehicles.


Priorities:
Of most importance:

I’m not going to spell out everything, but here are some notes on certain realism hot buttons. If the topic is not covered here, that does not mean it will not be monitored for realism, only that I have no stances I feel the need to clarify on them.

No naming convention is required. Please name your model and engine family what you want them to be called; I don’t care about cluttering my library at this point, and it might make naming conventions in Part 2 easier.

I think the Opel GT was available with a DAOHC engine (Opel cam in head engine) , so that’s actually realistic.

Same thing with stuff like the lotus elan and europa having a DOHC i4 in them, which would be in a similar class to what is being shown as examples.

Is this mandatory, or merely the maximum RON allowed? I suspect it’s the former.

On top of that, 50 or so years ago, affordable cars were not expected to use anything that could reduce production efficiency - there should not be any room in the rule set for those either. Nor should race parts (intake/exhaust) be allowed either.

Why, then, is there no absolute maximum price? It could be that since affordability is a major priority, and more expensive cars will score poorly in that particular stat, there is no need for an explicit price cap. And I would also recommend that the model and family names for each submission to be something like “70ASC - (your forum username)”.

The CIH is a kind of odd pushrod-OHC hybrid that really have no relative in Automation or, what I am aware of, the rest of the automotive world. DAOHC as I have understood it is the type used by 2v Volvo and VW engines, with no rockers, but the cam pushing on the valve more or less directly. For realism would allow any valvetrain that fits inside the PU/ET, but limit the valves to 2. 4v engines was pretty exotic before the mid 80s.

How loose a term “sports car” are we allowed? With the BMW 02 being an inspiration is something like a ford escort Mexico, Reliant Scimitar or Vauxhall Firenza viable as these are all sporty or even sports cars but with a slightly less usual body shape.

I agree that there should be a price limit, even if its soft. Otherwise, I’m fine with the rules - I’m assuming that since the 2002 ti is on there, sporty sedans are also allowed?

I have not stated an maximum price, but affordability is a top priority. If your car is too expensive you’ll simply place poorly.

Sports car is relatively loose; I’ve included the BMW 2002 and Mitsubishi Galant GTO on there to represent sporty cars with slightly less sporty shapes that may have been cross-shopped with the other options. They are perfectly acceptable, but if you go those route please keep it to two doors. Style is a top priority too, so make sure they look sporty!

On that note, fake convertibles/roadsters are 100% allowed. I do not want to penalize anyone making a roadster, so it is perfectly acceptable to chop the roof of a coupe body to do so.

Race parts I will not put an absolute ban on, but realistic engineering is a top priority, so make decisions like that at your own risk.

Limited production are allowed: if someone wants to squeeze, for example, fiberglass panels into their build, I don’t want to limit them.

I would prefer everyone use 98 RON so that everything is on an even playing field, but I won’t bin you if you choose not to use all the octane available to you.

Finally, rules regarding naming schemes will be touched on in the submission rules section, which will be filled out when submissions open. 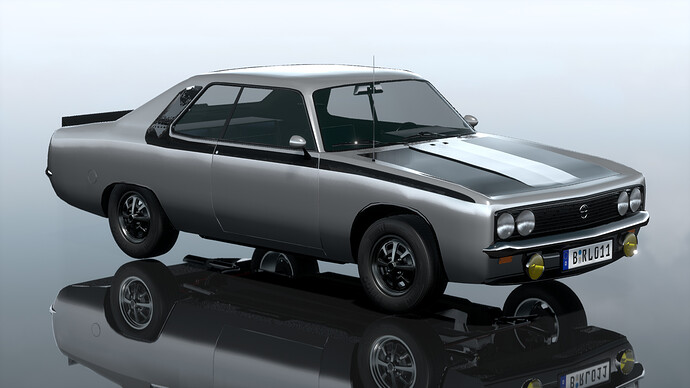 Very brief tuning and setup so still need to work on the mechanicals a bit more. Here’s what I have so far.

So just for understanding. does this mean that neither Production Units nor Engineering time can exceed 105 individually, or between them?

And does that refer to the engine and car separately or combined? (i.e. if the engine lies 102 and the car at 104, is that alright? Or do they need to be less than 105 together?)

Nothing cumulative, just no individual PU or ET can exceed 105

AWD hasn’t been invented yet in-game by 1970, and 4x4 is unlikely to be allowed either, but is RWD actually mandatory? I’m expecting it to be thus, given that in real life, FWD would not become commonplace among everyday cars for a few more years yet.

FWD is still allowed to allow for things like the Saab Sonnett II, Marcos Mini, or Lancia Fulvia.

About to write the same as donutsnail, though I’d never heard of the Saab - it looks great!

There was also the 1964 Jensen FF that was a 4WD sports car - I believe the first production car to use the ‘Ferguson Formula’, a specific 4WD system that controlled the amount of torque being sent to the front and rear axels. Pretty fancy for a British 60’s sports car (though not a budget car by any means).

Although neither FWD nor 4x4 sports cars were particularly commonplace by 1970, they did exist.

The Jensen FF is a special car, but is a far more advanced and expensive machine than what is expected here.

They might not fare as well, but they do seem to fit the rules.

DAOHC is on the table. While it is my understanding that this is uncommon, I cannot say with absolute certainty that it would have been truly unrealistic in an affordable sports car of this time. If you choose to use it, you will not be penalized for it.

Does this mean two valve SOHC will be penalized?

The 105 PU limit may make spaceframe chassis unviable - yes, monocoques are probably straight better anyway for stats and score (but not that much), but this would also exclude boutique manufacturers lore-wise. How about increasing trim PU to 115 and leaving everything else the same?

Does this mean two valve SOHC will be penalized?

No. I’m not sure I follow your logic here, but I can assure you that SOHC 2v is more than perfectly acceptable.

There’s no ban on muscle/pony-esque cars that fit all the requirements, right?

No, but keep in mind the 2800cc engine displacement limit. A pony car that’s fully American-sized may not enjoy that limit, but the Ford Capri, a smaller play on the same formula, is among the inspiration vehicles.

I didn’t consider space frame when testing; due to it’s inherent cost I basically assumed it would be unviable. I will take a closer look at all the ET & PU limits tonight and may loosen or tighten some. One number for all four seemed like a clean easy rule though.

No. I’m not sure I follow your logic here, but I can assure you that SOHC 2v is more than perfectly acceptable.

Cool, thanks. I was just a little confused since you felt the need to clarify about the legality of DAOHC despite being the second least sophisticated valvetrain and actually somewhat common for the era. I believe the Datsun 240Z and 510, as well as various Mercedes engines of the time, were DAOHC. I’m sure there’s more. SOHC is inarguably more complex, and if I’m not mistaken, more rare for the era. I think BMW used it in the 2002, but I can’t think of any others off the top of my head. Two valve DOHC would be even more rare still, think Lotus Cortina and Alfa Romeo. But thanks for clarifying, off to the dyno…