I would just do it like real racing. Power limit and such (Like in Forza/Granturismo) to keep it fair. Then it all comes down if your car is good at high-end/low-end, turbo settings, fuel mixture etc. etc.

Well wait, is this a top gear style power board where all different sporty cars from gti’s and civics to koneggggiggiseggs and Ferraris are on the same board, or a forza spec class series?

I feel that both boards could be fun, nialloftara. I prefer competing in classes, but a Top Gear style board would be fun too. Wouldn’t you like to see your sport hatchback beat someone’s supercar?

Yes, at the moment, it is a TG board, one for race, and one for production.

I like the idea of the top gear board more, but I can see the appeal of a class structure. Either way I intend to have one of my econo-sports car near the top

That is a bit unfair to higher end cars. The Mustang GT500 has way over 600hp, but is NOT a race car. Look at the real TG board, mostly all of the top spots are occupied with street cars with more than 600hp (except for the track day cars).

I’d say not only is it unfair to the production cars not quite fitting a category, but then would make someone wonder why race cars don’t have the same classifications. If anything, I’d rather see the board just be the original idea of 2 boards, but maybe the optional listing of what category vehicle should fit, like such:

And here’s what I plan to run in my race car attempts (or the first few at least). Not exactly a cheap engine! At $20/man hour, this would cost $26775.62! Also, no magnesium, titanium, VVT, nor VVL used here. On top of that, it’s using +20 quality total (admittedly with a few areas going heavily negative quality to support adding positive quality elsewhere!). 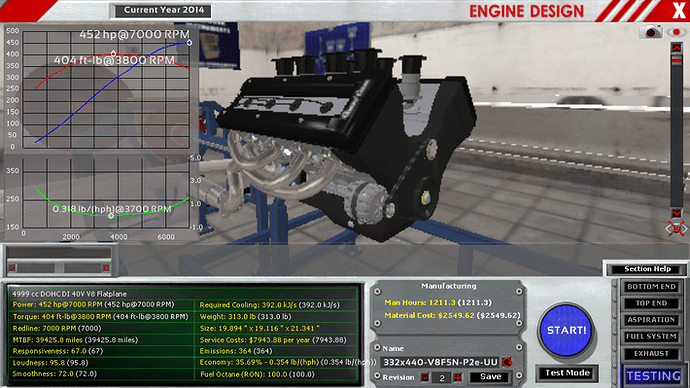 How about seperating them in HP or KW categories.

Waiting for the update, hope it gets here soon

You want to run a race car you’re gonna need to change that tune, not enough power for the size and time, try lowering the economy and push at least another 100 hp out of that.

It’s real easy to run something pushing 800+HP with that size, but I found it more interesting trying to keep within the constraints of what would actually be something I’d run in a car doing endurance races. Spent basically 2 minutes changing to more power, but found myself kinda bored doing so. The prior engine was something that I wanted to get to minimize weight, maximize economy, retain MTBF, and keep within a nice power range (around 450HP). I stuck that one in a car for kicks and found it reaching 188+MPH and still getting ~35MPG. 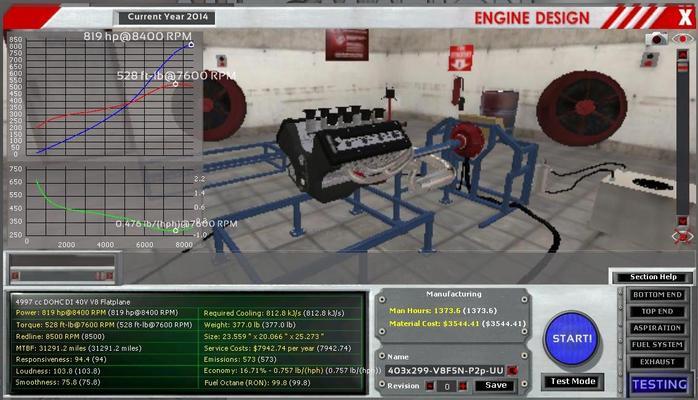 Well what I meant was for the race class a 380lb engine with 500hp is on the low side, at the same time the hours are high for a production class, maybe I’m wrong but it seems like a engine for a limited run track day chassis. Either way we’ll all find out by the weekend when the tracks are up and cars are pouring in.

The Airfield lap time arent out yet for the pubilc, and the thread already got 4 pages.

Closed till the open beta releases. If you have complains please PN me. (@Pleb: If you wish a clean up, we mods can do)

Reopened due to Open Beta release

I made a full-size luxury car that ran it in 89.xx seconds. I’m uploading it to Youtube (more of an advertisement, not just the lap). Obviously, this is a production car.

So that will get the ball rolling!

The leaderboard for the Airfield test track is now open! Get those cars in guys!

Is their no restriction on year or part quality? I would have assumed there would at least be year classes so that its not just a challenge to see who can tweak a 2020 car best as possible.

[quote=“ryandude2448”]I made a full-size luxury car that ran it in 89.xx seconds. I’m uploading it to Youtube (more of an advertisement, not just the lap). Obviously, this is a production car.

So that will get the ball rolling![/quote]

Is their no restriction on year or part quality? I would have assumed there would at least be year classes so that its not just a challenge to see who can tweak a 2020 car best as possible.

You can’t make a car from any later than 2014. Cars from the future will not be counted.