yes, but I vote in favor of not changing it, next year we can do 75/76 if we change it we will all have to remake our cars.

My sincere apologies for all the mistakes. I should have paid more attention while writing this yesterday, but my mind was elsewhere, stressing about assessments. Anyway, we did allow for a 2 day period to tweak the rules and such, so do continue to discuss, once the dust settles I will incorporate it into the rules.

Actually you just need to do one “click” increasing the year, isn’t a big deal.

Change the date, as Nomade0013 said, it’s easy to adjust the date on a pre-made car!

I Don’t think there’s any tech differences between 73 & 74 so bumping it up to 74 as it should wouldn’t hurt. if it was 75 though there may be tech issues, IIRC that’s when turbos become available, So next round (76/77) would be the 1st round with Turbos available.

. But I don’t think they will be competitive.

And I think vented discs will be available too

You just challenged some people there

Hey guys, the deadline end in 20h and 11min and I just received 3 entries so far.

Ready just in time for the 1974 start the Bogliq Expresso AE is back for another round! 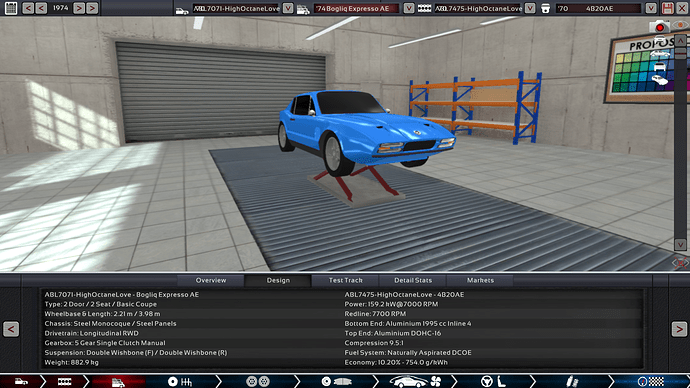 Since the previous season’s six is now prohibited, the owner of this Expresso has replaced it with a Leeroy Racing crate motor specifically designed for ameteur level club events

thought this challenge died because the title never changed. it was left at round 2

mine will appear soon-ish. bare with…

We’re currently discussing extending the deadline to Friday. What do you think?

Though, what would the build year be exactly? Can one submit something with trim and variant set in 1975? Just a little something that got me confused.

Yeah I can submit one by Friday, tomorrow might be difficult!

Yep, Friday it is then!

i think it should be like:
Deadline: Sa.
Writing So, Mo, Di, (Mi)
Diskussion: Mi, Do, Fr
New rules fixed on Sa.
so you got one full week to build

We usually put a full week to build ( the rules were posted Jan/17, we extended the deadline because we forgot to update the title), and a full week to launch the results, the reviews should be done earlier, but the last two rounds I’ve got really busy, what won’t happen this one.

But we can use the 3 weeks plan if the players think it’s better, I agree that having around 18 cars per round get me pretty busy.