First established in 1960 in Kingston Jamaica, it was the first automotive company to erupt in the Caribbean after World War 2. The country saw a significant boost in production in next few years and was on it’s way to gain full independence from Britain. This was the vision of a man who was seen as unorthodox by many who laughed at the idea of a Jamaican motorcar manufacturer, Mr Donelli Cornaldie I. Mr Cornaldie was no ordinary Jamaican. His roots can be traced originally back to Germany, as his Grandfather was indeed a German soldier that spent a few short years on the island on active duty.

He built the first car in 1962, called the I-1. It was hand built buy a team of 7 in an old plantation warehouse on the kingston hillsides overlooking the Capital. It was powered by a 1100cc H4 engine borrowed from a VW Beetle that produced 24 hp. The body was carved from ceedar as well as bamboo that sat on a steel ladder frame. The rest of the fittings were also borrowed from the scrapyard off old VWs. The car was opened to the public in December of 1962, and people gathered from afar to view the strange looking metal and wooden concoction. He asked for a modest $1000 for it and strangely it sold somehow and that’s where it all began.

Order after order came in and car after car went out. 100s were sold over the next 2 years and Mr Cornaldie decided to expand his operation. He began to work on his own engine design after studying 1100 cc H4s he was using. This process took him 3 years and the I4-35 was created. This was an inline 4, 1600cc engine that produced 35 HP. It was nothing to beat any world records, but it did provide the motivation he needed to pursue his ultimate creation. Sadly that’s hwere it ended. In 1967, Jamaica gained independence from Great Britain which led to a major political war in the years to follow. Where the munitions market expanded, all other industries were going bankrupt. The economy bled, and Mr Cornaldie’s dream also died as the company went bankrupt. He bacame ill with stage 3 cancer at the Age of 54, and died at 57. He however had a son, Donelli Cornaldie II who had the same dream as him.

Donelli Cornaldie II went abroad in his early years to study automotive engineering at Birmingham University, after which he got a Job working with Ford. He spent most of his professional years as an engineer for Ford UK, until he made up his mind to start his own company, C.A.C.

The company was officially reopened under the same name his father used, and he set forth designing small economical hatch backs which sold very well in the UK. Over the years the company slowly grew in popularity and became a thriving business in the modern world with a highly diversified portfolio ranging from economy cars, sport cars, hyper cars, and SUVs.

This is a new one, I like it.
Thank you for doing not just another euro company. This will be cool to see what comes out of Jamaica

The first car to be made by Mr Cornaldie after he restarted the company in 2000. It was a 5 seat supermini hatchback that appealed well to elderly women in the UK that accounted for over 50% of the buyers. It was cheap too, coming in at around $11000 while being fairly reliable and simple in its design. After sales took off in the UK it was then launched in Japan and the Philippines where it was met with a substantial amount of buyers looking for small hatches with a solid platform for moddability. 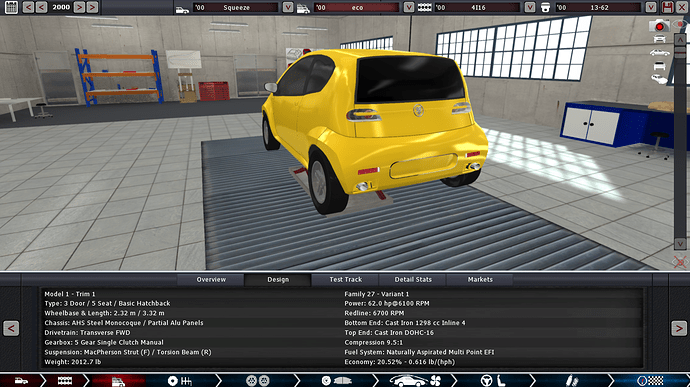 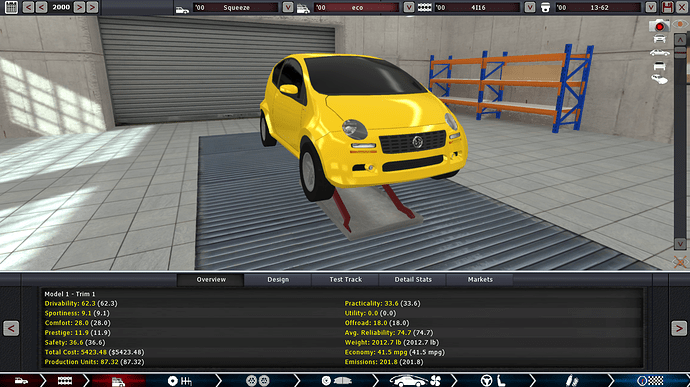 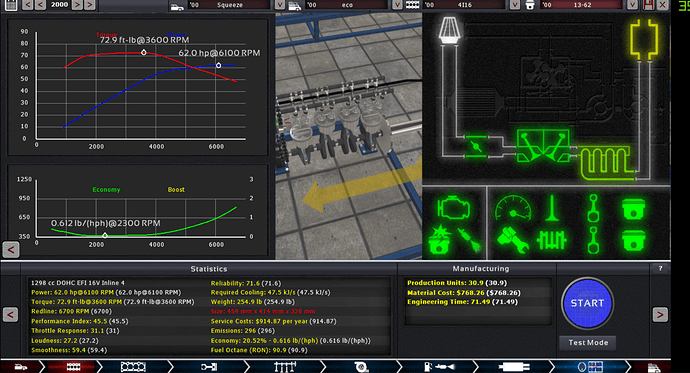 Well, the term “Cac” clearly doesn’t have any meaning where you live

lol I’m guessing it doesn’t mean anything good where you live?

Thank god I didn’t add a K then huh…lol

And “kac” means “hangover” in Polish

Don’t worry, I’ve had hard time with shorts too. xD

How the hell do you even pronounce that?

you need to be actual Pole (like me, szafirowy and Kubboz if I remember correctly)

After success of the squeeze, experts at CAC decided that they need to keep the momentum going and introduce a wider variety of cars over the next 5 years. They already had a solid platform, so they put their designers at work on project called “project minimalist”. This was a line of cars to be built on the design elements of the squeeze that reaped success with these 3 targets in order of importance: affordability, reliability, practicality.

The company decided that trim levels would be classed as X: base, L: premium/luxury, Sport and SuperTourer for all upcoming models.

The first car out of that project was the Matilda. It was a 1.5 litre 16 valve engine that produced 120 hp. It was also light weighing in at 2600 lbs, which meant it felt quite sporty when paired with a 5 speed manual. It was quite practical with 5 seats and standard equipment, and returned a respectable 36 mpg. The car was retailed at just over $14000 which also meant it was quite affordable, so it sold quite well. 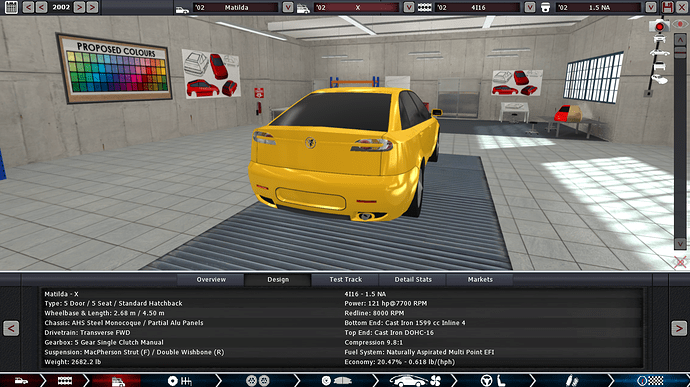 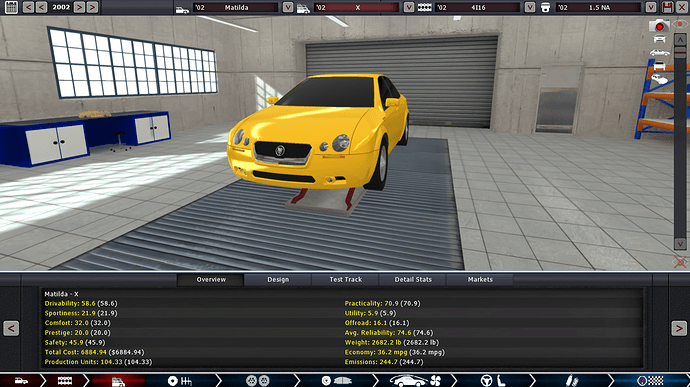 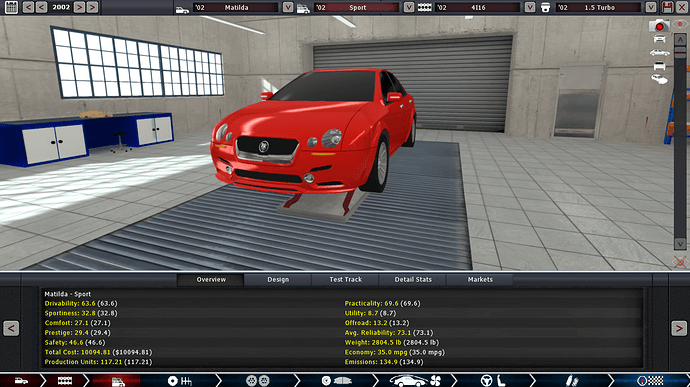 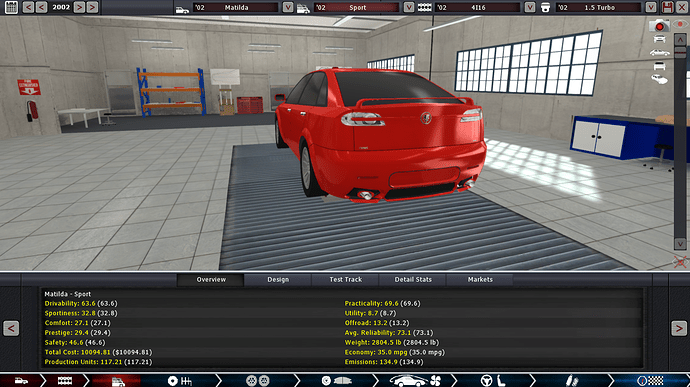 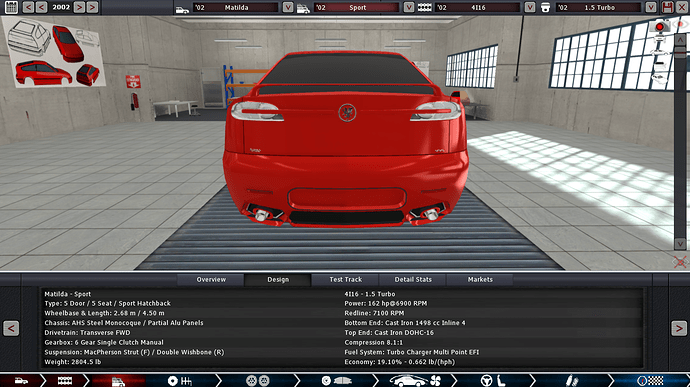 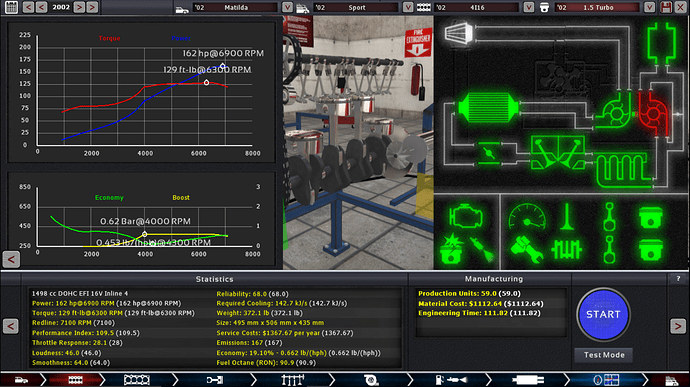 Eeee, wait what? How did you get higher drivability with the turbocharged variant?

came with better tires, brakes and suspension, but also added weight and cost.

Psst… buddy… ya’ll got any more of them horsepowers? I can check. I like the car, want to make a tuned version for it at KHT. You interested?

The turbo on the Matilda spools up too late. I suggest that you shrink the compressor to avoid this.

And since direct injection is available in 2002, why not use it to improve the fuel economy figures even further? I reckon it will be worth the extra outlay…

It could be tuned way better of course, but remember I have to role play as a relatively new manufacturer with limited experience. And with that multipoint injection is a little cheaper and we didn’t adopt direct injection til 2005 when the squeeze was refreshed.