Ok so I like making my own history up for my car company, and as we all know sooner or later problems always happen so what I am doing is in 1996 Charma will face a strike where their engine plant feels that they are not being paid enough for their effects considering how successful Charma had recently grown. With this being said Charma has to look to new companies to keep their beloved Hydra from facing extinction!

The Challenge Requirements are as followed

year 1996
No limit on man hours So have fun with the tech!
Engine must be INLINE 6
must use a dohc
and valve covers must be orange as is Charma history and tradition
produce over 300hp but not exceeding 430hp
engine can be either na or turboed
car must run smoothly and get min of 20 mpg
keep in mind this is a performance engine
no race intake
tubular and long tube headers are ok but no race headers
and it needs to have a mtbf of arond 70-100k

Can we have the car it needs to be stuffed in?

you sure can! Although I had wanted it to be a surprise chassis because the styling has changed so much over the 60 years it has been produced. but here ya go! hope ya like it, its my favourite car to date.

also doubt you will have any issues stuffing an engine in. I have made a special edition for fun that I may or may not release with almost a max displacement inline six for this, its massive lol
Charma Hydra MK6 - Rev - 0.lua (23.1 KB) 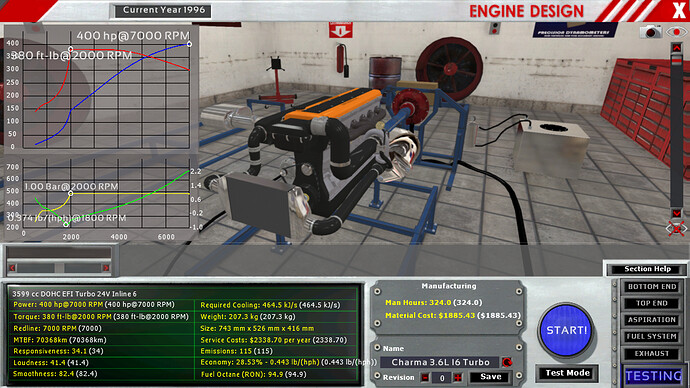 Two days left to get your engines in

The Cief Designer, and CEO of Charma Automobiles.

I would modify an engine (and car) that I built earlier (they actually happen to fit all the requirements exactly, EXCEPT the year D:), but I’m sleep-deprived, somewhat sunburned, and probably have a mild case of heatstroke. Oh well, maybe tomorrow. 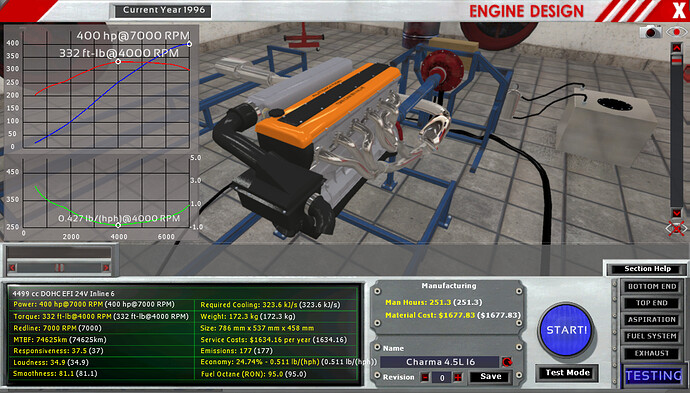 Will you only announce a winner or will you give thoughts and grades to all entries?

hmm had never really thought about grading the others but that does seem like a fun thing to do, it will allow the others to know why their engine were not chosen I may take 2 engines one turbo and one NA but that is undecided. Tomorrow the winner shall be announced I got back really Late tonight or else I would have done it tonight.

Yes Manche There is finally some news I just got off work and have a few days off. In a couple of hours I will have the results up I am just at the stable with my gf enjoying a nice relaxing night with the horses

First off I would like to thank all of the competitors who took part in my challenge! It was awesome seeing all your amazing engines and just how close the competition really was. I had planned on grading all the engines but sadly I wont be able to do that as I have been called back out to work So I dont have a lot of time before I have to leave the house and would still kinda like like to try out the open beta before I lose all my platforms.

I will say that I am not kidding when the top 3 engines were extremely close to each other, they all made good power, and followed the guideline very well. So without making you guys wait any longer here is the MK6 Charma Hydra Featuring a Smolensk Tuning Engine!

Congratulations Jakgoe for winning The challenge, and thanks to all who participated! Continue making awesome engines guys and Im sure there will be many more challenges for this same year but different requirements. Hope too see you all on my next Challenge but this time the challenge will only run on a set of days off so I can actually focus on the challenge and not work

are you going to comment about the engines you recieved?

Thank you for selecting my engine! As Manche said, it would be nice if you posted a few comments on each engine.

Jakgoe- Your engine was actually Statistically better in every aspect except for MTBF then all the other engines This is why your engine was chosen. This is not saying you had the most HP or TRQ , its saying that it has the best average per litre this makes for a very wide range of usable power and the fact you used a naturally aspirated engine did help keep it this way as there was no aggressive power curve. Congratulations again for winning the challenge!

Manche- Your engine actually did very well in the challenge, it sported the second most powerful engine in the competition and even had more MTBF then Jakgoe’s. However it lacked in responsiveness, smoothness and economy. Until Jakgoe had entered his revised engine you had the upper hand in this challenge and placed a close second, good job!

OppositeLock- I was very impressed with the economy you were getting with your turboed powerplant and it had actually got the second best economy rating out of all the engines submitted. It did fall behind almost everywhere else though.I feel this engine could have benefited from a bit more response and power but this also would have come with trade offs like less economy.

Nialloftara- I reall did enjoy the concept of a 7.2L inline six! as soon as I seen the name I wanted to dig into it and see what she could do! Your engine was actually the most powerful engine I had got and the most economical but most of all blew everyone away with its insane 472 FT-LBS of torque!, so congrats on all the mini wins! this engine was a serious competitor taking the last podium place in third. sadly it scored low on smoothness and responsiveness and had these two issues been addressed I dont see how it wouldnt have won.

There were a few engines that had been sent to me via PM and I did include these in the challenge but I cleaned out my inbox and now cannot remember who alls engines they were. To these competitors if you would like me to explain why you didnt make podium please feel free to let me know which was yoursas I have not deleted them but am updating now so if it gets lost in the new beta update I am sorry.

so between these engines the official standings were,