I recently left a comment in a wishlist thread on the Steam discussion board - and I ended up tumbling down a rabbit hole of possibilities.

So I sketched out a flowchart for how companies can be funded in Automation’s Grand Campaign beyond just setting a very generous starting balance and/or borrowing from a bank.

Take a look and let me know your thoughts! (Image Preview below, but best viewed on Google Drive) 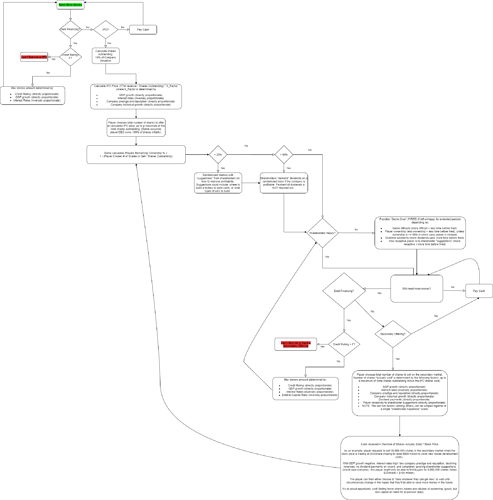 Really cool idea, maybe add stock buybacks too so you can reduce the threat of being fired if you are planning something risky

Thanks for the reply! I actually have a moral objection against stock buybacks. They were illegal in the United States prior to 1982 (and I think they should’ve stayed that way). That being said, if the company is flush with cash and you decide to buyback stock - technically the company would own it. Not the player. So you’d still be at risk of getting let go. That’s the way I envisioned it anyway.

The only way it would make sense for the player to be able to buy back stock (to bypass the potential to be fired) is if the player has the ability to buy other car companies (private or public). I’m not sure if that’ll be a “thing” in Automation 1.0.

I understand you moral objection in the real world, however in Automation the player agent is not that well defined, your main objective is to sell cars, not enlarge your personal fortune. I still think there should be some way to recover control of the company if you wish, maybe not buybacks
but maybe going back to being a private company. Now you can argue that the money would be better spent on R/D and you would probably be correct, but it might be fun to let the player shoot himself in the foot too.

Thanks for sharing this

we’re at this point unsure how much in terms of financing options there will be in the GC, but we’ll definitely considering IPOs! Cheers