Something I’ve noticed to be seemingly missing from Automation is door options, as in what kind of doors should be on the car. Its quite a big design consideration and while we can put the handles in different places cosmetically, it should be said that in game terms the changes to a car can actually be quite drastic depending on the option.

Cars with fancy doors straight away seem more prestigious for example, but they add cost, weight, complexity and are sometimes actually a safety risk (gullwings in a rollover, i’m looking at you…).

Fancy doors don’t have to be the preserve of the rich as well. The old Fiat 500 had suicide doors, and the Fiat Multipla 600 has suicide doors “the wrong way round”. 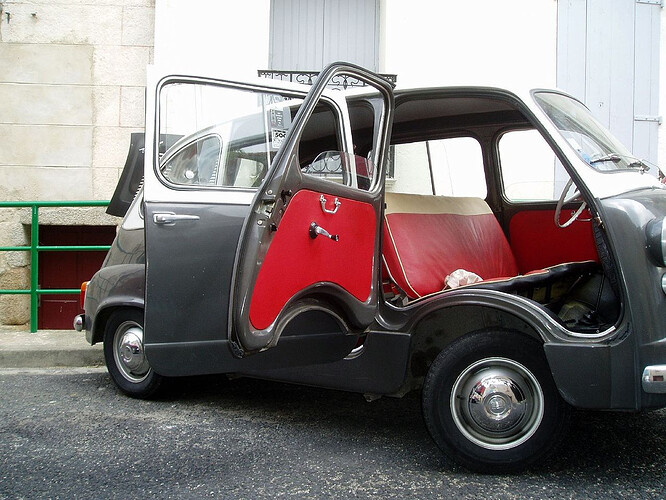 With Tesla’s new SUV gullwing doors are now no longer the preserve of supercars, or how about the Peugeot 1007 and its electronically operated sliding doors? The range of door designs is actually huge.

Would love to know what people think?

To be perfectly frank, I think some things are best reserved for the power of imagination. Door design and configuration would reach a level of complexity that rivals the engine designer and for what exactly? Suicide doors are notably absent from most modern cars because they’re, well, suicidal - unsafe. Gullwings are too for the same reason; what happens when the car is on its lid? You’re trapped because the hinge is on the roof. Sliding doors - really only seen on vans and people movers but are so pervasive I think they’re an expectation now on such vehicles more than a luxury. And the same goes for scissor doors but replace vans with supercars.

My point is so much complexity for so little added gameplay. Certain door configurations are inherent to certain cars and everything else usually fits neatly into the 2 or 4 standard door schema.

Don’t we just need fixture placement and imagination for this?