Engine designer is feature locked and so on, HOWEVER

Older car bodies get a reduction in safety, desirability and probably some other relevant aspects as in-game time progresses. Engine families designed at an earlier date should get similar penalites, like reductions in weight, volumetric efficiency, emissions and so on and so forth. As is an engine family designed in 1940 that has been updated for the year 2020 (extreme example used to prove a point) gets no penalties compared to an identical engine family introduced in 2020, apart from weight due to the limited choice of materials.
An example: 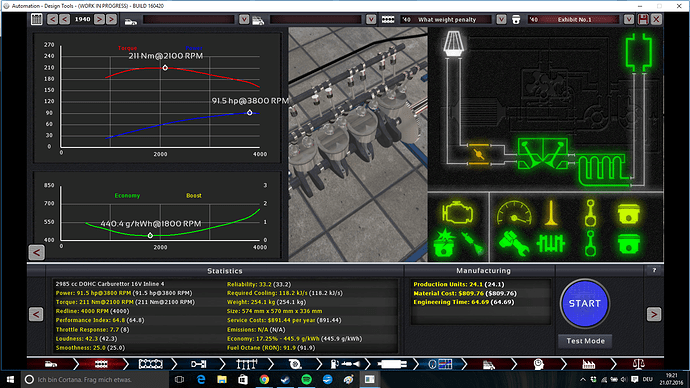 ^ This is a reasonably overengineered DOHC 16 valve inline four introduced in 1940 for a purpose. 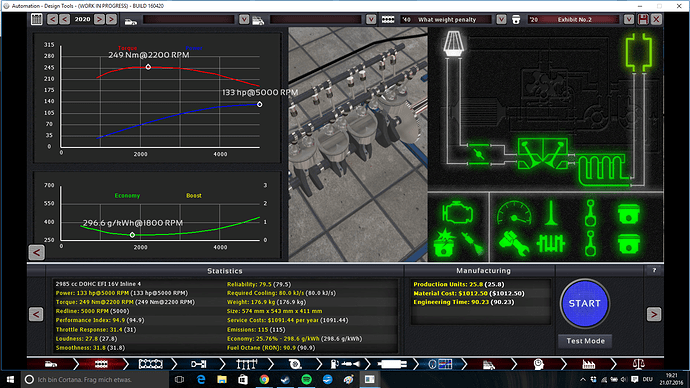 ^ This is the exact same reasonably overengineered DOHC 16 valve inline four that has been slightly updated for the year 2020 with fuel injection, a catalytic converter and a raised compression ratio but left otherwise unchanged. Somehow, during those past 80 years it lost 80kgs of weight and manages to be reasonably competitive against modern engines, a feat that would normally require reengineering the entire thing and thus rendering designing new engine families unnecessary.
In my not so humble opinion an engine family should be “weight-locked” to the year it was introduced, while also being limited in terms of the maximum fuel efficiency and minimum emissions it can achieve. I have not yet figured out a balanced way to calculate these penalties but I think letting the penalty grow with each passing year might be sensible. Hell, this might actually benefit the tycoon part since this prevents “gaming” the system by upgrading ONE family for the duration of the game and forces players to innovate every now and then.

To put this into perspective: Engine families are normally only capable of staying competitive without total reengineering for 20-30 years, 40 at a stretch, but most of the time a lot less than that. Even the greatest of engine designs must be put to rest eventually.

Am awaiting the devs response how this is a preposterious suggestion that is impossible to implement.

I wouldn’t consider 133hp out of a 3L I4 to be competitive with modern engines, especially with that kind of efficiency. But later I’m gonna give it a try myself to see how much I can wring out of a 1940-base engine.

It’s running a cam profile of 18 (aka Mellow AF), 8.5:1 compression, no VVT, VVL or Direct Injection and the same heavy cast pistons as the 1940 base engine. Optimized for maximum efficiency with all the go efficient bits I was able to get that up to 35.4% Volumetric efficiency as well as 200hp & 298Nm with a FLAT torque curve. Keep in mind that the bore, stroke and total displacement also play a part in this.

Okay, I can confirm, any engine variant built in 2020 will be exactly identical no matter if the family was first built in 1940 or 2020. 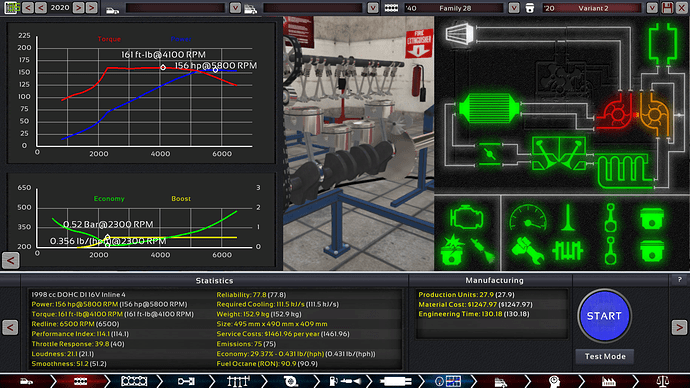 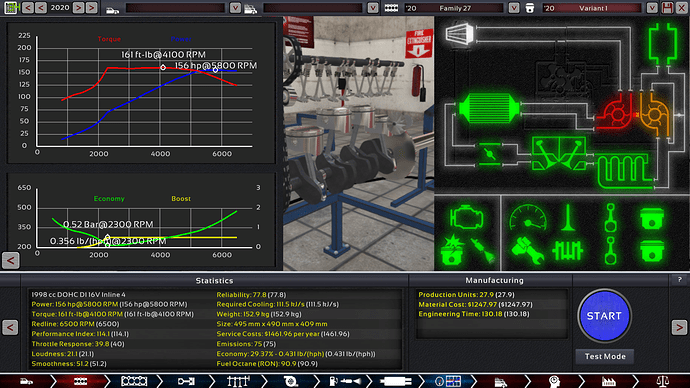 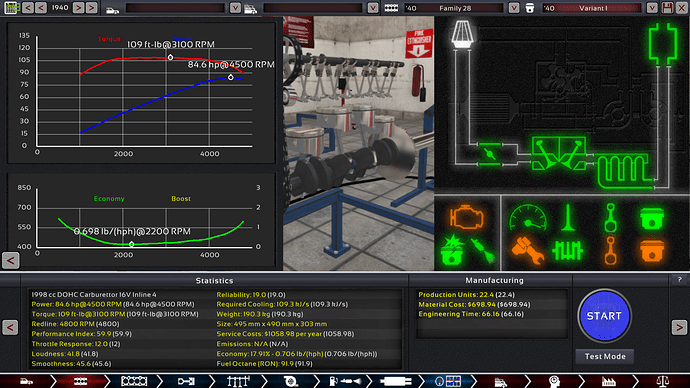 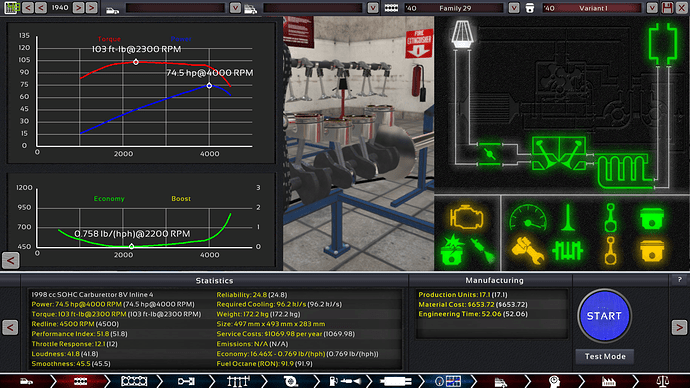 As you can see the SOHC-2 is not only cheaper and easier to produce, but way more reliable and lighter. As the years go by DOHC becomes cheaper and more reliable, making it more feasible. The progression naturally encourages the development of new engines. Not to mention VVL in 1994 changes everything. Plus, the development of new engine parts will favor different engine dimensions (forged parts favor undersquare designs). I don’t think this is impossible to implement, but I don’t think it’s something worth spending time implementing when there’s already plenty of incentive to innovate.

That’s odd. I had a go at comparing SOHC vs DOHC and couldn’t help but notice they were nearly identical. Must have something to do with the fact that mine have the same redline and use heavy cast pistons to compensate for the immense torque. 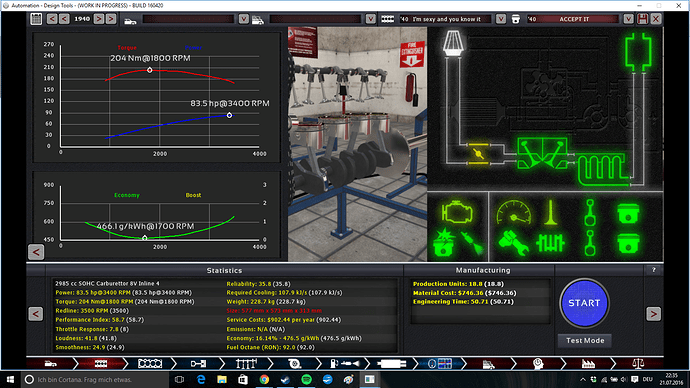 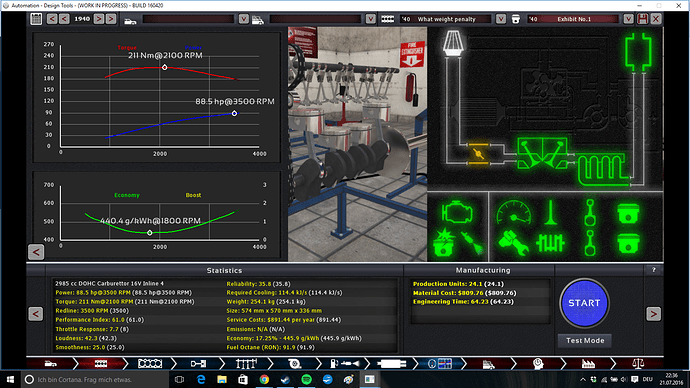 The main advantage of SOHC apart from the 20% cheaper production costs was weight. Of course DOHC makes more power (it could make more but level playing field) and is slightly more efficient, but reliability was identical and oddly enough the servicing cost of DOHC are cheaper by $10.
And to be honest I personally don’t use VVL as IMO it simply adds too much weight to offset the negligible cost advantage over a 5 valve head. Now THAT is something that makes me innovate.

Its not, I did a similar thing with my truck six, however I don’t want it to magically lose 40kgs by adding throttle body injection and increasing the block height to accomodate a longer stroke thirty years on.

So an engine that is in production for over 60 years and got constant improvements with new fuel systems and other stuff should be worse than a brand new engine?
I would suggest the other way around. It has a proven bottom and top-end setup - the only difference would be the Injection Systems which would get almost no benefit - it should be slightly lighter and more reliable in that department than a brand new one…

The reliability thing I can get behind. A proven design with all its issues ironed out should always be more reliable than a brand new engine, but how could it be lighter than a new engine without considering the whole OHV vs. OHC argument?

This is an interesting observation overall. I agree that the extreme situation of:

is not reasonable, but rather an exploit that needs addressing. On the other hand, in this situation:

makes perfect sense and I would go as far as to say it should probably be better than the modern counterpart in reliability but a little bit worse in performance.

We will have to look into how to handle this situation better.

I wish you the best of luck trying to implement THAT. I’d just like to see a slight bump up in weight, reliability and emissions for older engine families, and while we’re at it a mild increase of RPM limits as in less susceptibility to valve float across all head types because why not there are tons of 1960s pushrod engines that can withstand 5500+rpm without the need for excessive quality sliders.

I ran periodic updates to my engine, largely as major changes were made, like a new carb available, or the switch to unleaded. Essentially all that’s the same is the block and head. Compare the first generation to the most recent side by side, and you’ll hardly be looking at the same engine if done right.

I tried the same approach - new families are only worth creating if you want to take advantage of a recently introduced family component (AlSi block and/or heads, magnesium block, VVL, etc.) but the introduction of new variant technologies (such as VVT, direct injection, or anything that requires a CNC shop) only requires creating a new variant.