This is in the regular game! No beta here.
Today i’m asking all of you guys what your fastest REAR wheel drive car 1/4 mile car is. I’ll go over mine quick, feel free to post yours down below. P.s. I have a modded verison if you guys are into that, that i’ll post below,

I’m also wondering if you guys would like to make something like a street outlaws list?
Front Engine, Rwd. Top 10 people. That kinda stuff. Please let me know. 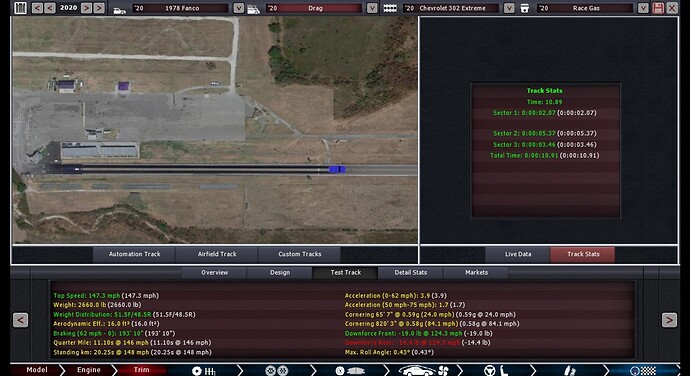 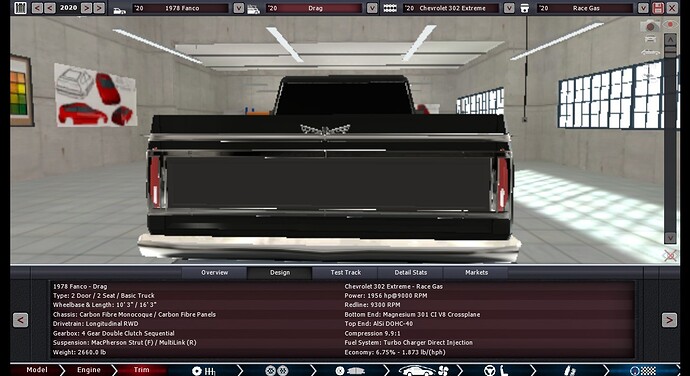 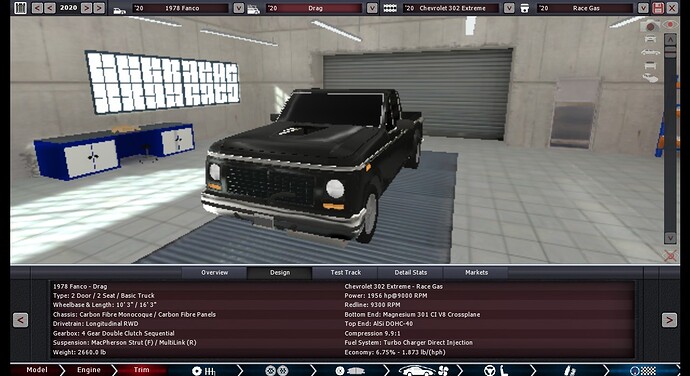 When you say your car is ‘modded’, what do you mean by this? Have you modified the text of the .lua files in any way, or are you using steam workshop mods?

If it’s the former, then it’s very difficult to then make comparisons. If it’s the latter, then that’s no problem at all.

This also seems like a fun way to test the new balance in the open beta release.

Oh, ok. Not everybody likes to modify the bones of their car bodies, so we couldn’t acknowledge this as official… but it’s still a good exercise to try and beat it.

I take it that this is for FR cars and not MR cars, right?

Yes. If you guys want it to be offical, I have plenty of other cars that I didn’t modify that are pretty fast rwd if you want me to rework this post to where its stock game car.

For the purposes of an official ‘Street Outlaws’ list, that’d be great! Having lists for modified .lua cars has been frowned upon since the beginning of Automation time, mainly because, well, if you modify one thing, what’s to stop somebody else from modifying something else… and so on and so forth until somebody breaks their game going too far

[size=85]I myself have no problems with altering the bones to accommodate ridiculously wide tyres![/size]

Here’s the lua modded car. Im pretty sure this is the fastest rwd car ever made in this game. The weird thing is that it’s NA. Its got the big 662 in there tho. 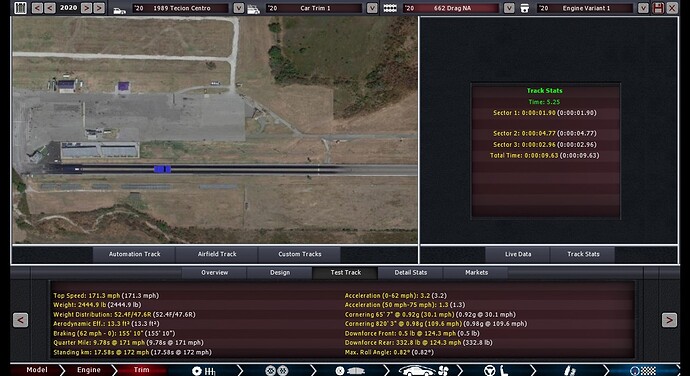 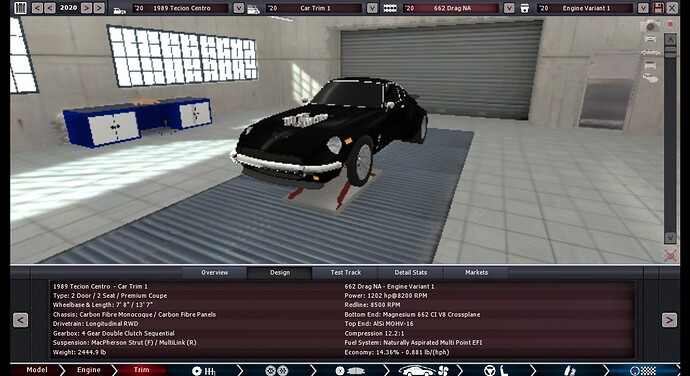 If you want a competition - give us a set of rules.
Also - if this is about lua modding then it’s not a competition with the game, its’ about who can cheat better.

Well here’s my dirt simple 1985 all steel, solid leaf rear G-body dipping into the mid 11’s with a swapped modern 10 liter OHV making 876 hp, all motor, on pumpgas. No quality sliders were used and with advanced safety for the inevitable crash.
note the time is with the vents taped off until the engine can barley still run, allowing full cooling costs me, as i have it set on the stats page for reliability, costs me about 2 tenths. 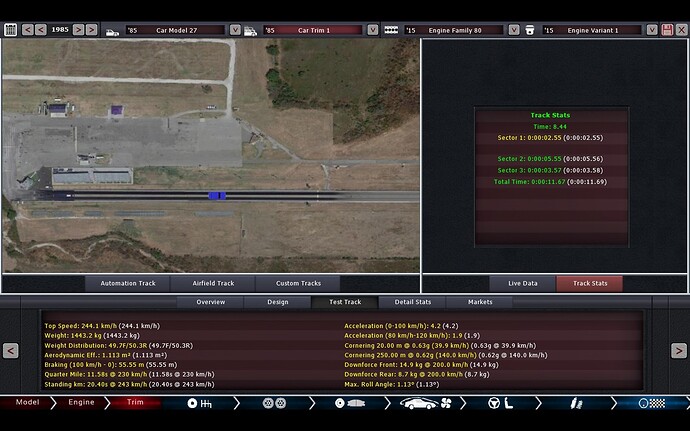 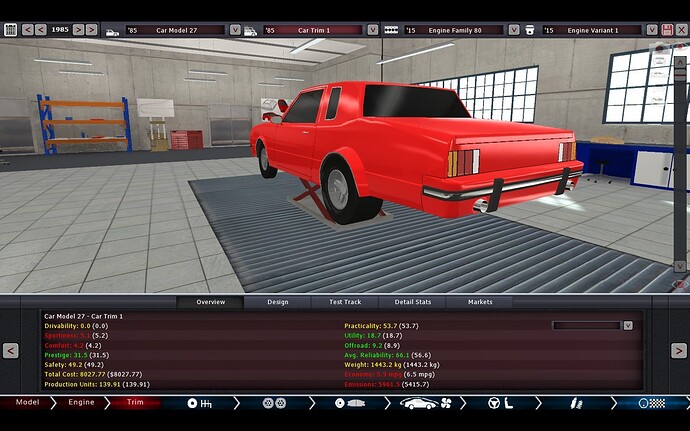 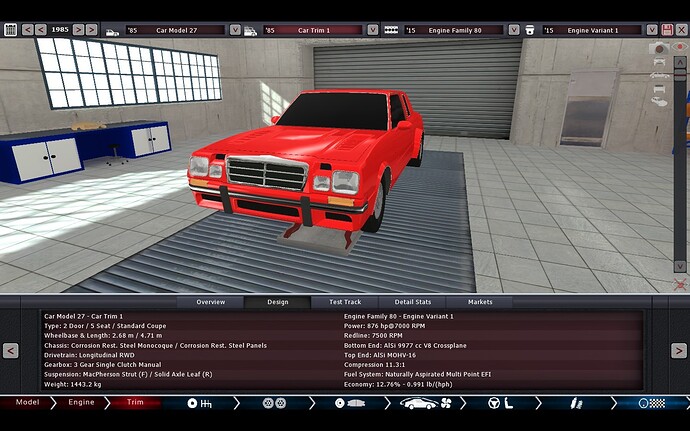 Anyway, here is mine. Not based on anything, other than that it uses a small block Chevy for its powerplant. 2015 chassis and engine producing 603hp, naturally aspirated 4.9L OHV V8 power. Yes, there is gratuitous quality slider abuse going on here, because racecar. Drivablity, Comfort, and Safety are all 0.0, because this isn’t meant for a street. It only has to go forward in a straight line, one quarter-mile at a time. Front tires are 155/75 and rear tires are 365/30 on 14" wheels.

I haven’t messed with anything to do with track or grip. If you look where Tulsa drag strip was posted people have ran faster times and also Youtuber, Tom Henks, gets faster times on Tulsa also. I have a feeling that its all about the suspension setup. 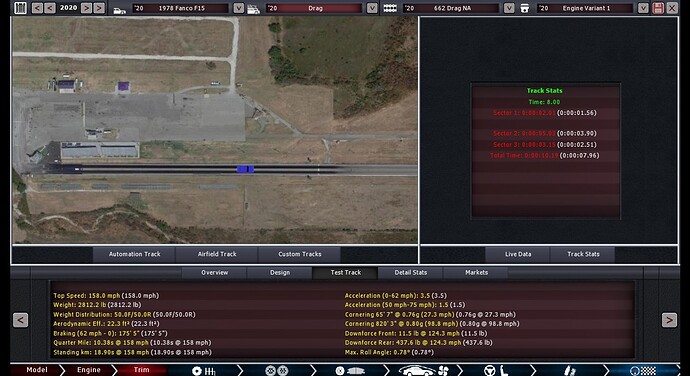 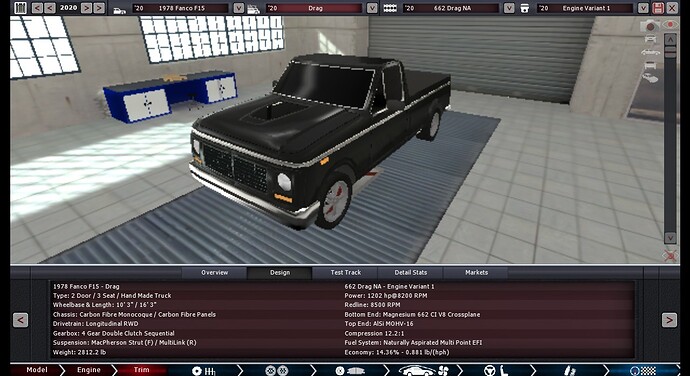 Damn, I’m told that the game won’t revert to pre-beta calculations once it’s run beta, so I guess I can’t join this until it takes up the new calculations.

Strop just feel free to post. It doesn’t really matter if your in the beta version.

Well, abusing everything within the bounds of the game by maximising rear weight, minimising front weight, using a strange NA 7L v6 (I didn’t really give much thought about this part, and don’t worry about the name, it was from a test car using the 10s coupe which turned out to be disappointing and will ensure I don’t use turbos in modern cars until the modern tech comes out), with flagrantly unrealistic tech slider in 2020, I can at least up the ante a bit after some minutes of fiddling. 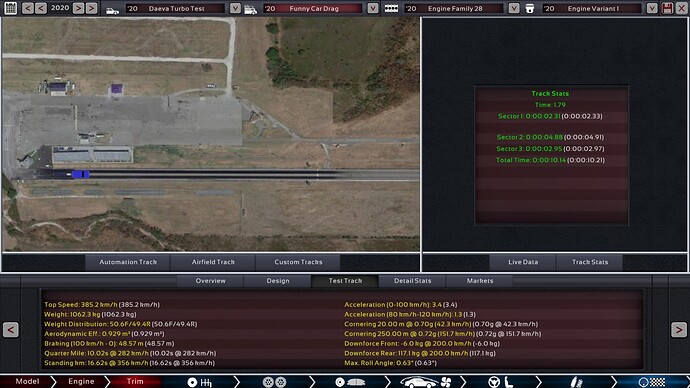 Well damn it strop I just got the G body past him too. 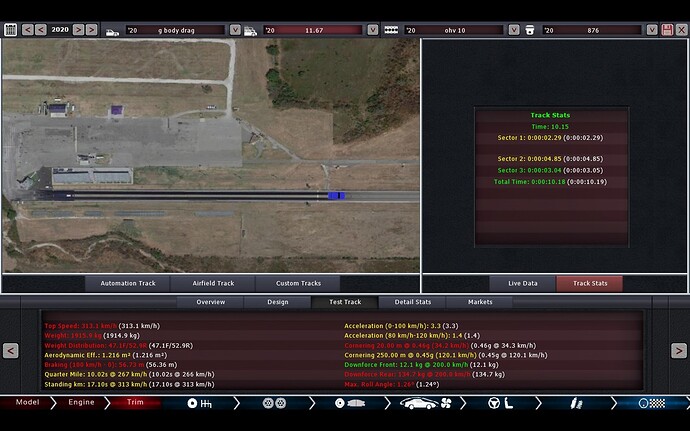 Yeah well, it’s kind of apples and oranges since I’m using DOHC and a completely different setup, but hey. I think there could be other bodies with more potential than the one I’m using. And I’m quite sure I’m not really maxxing this out, I only had time for one shot.

Fine fine, guess I have to abandon the all steel car. Here’s my carbon chassis G-Body pushing into the 9’s, now but with a 10 liter DOHC 40v and over 1400hp 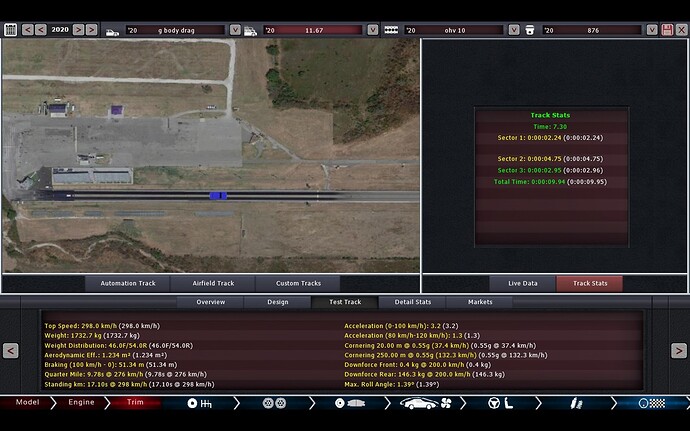 Just going to put this here. 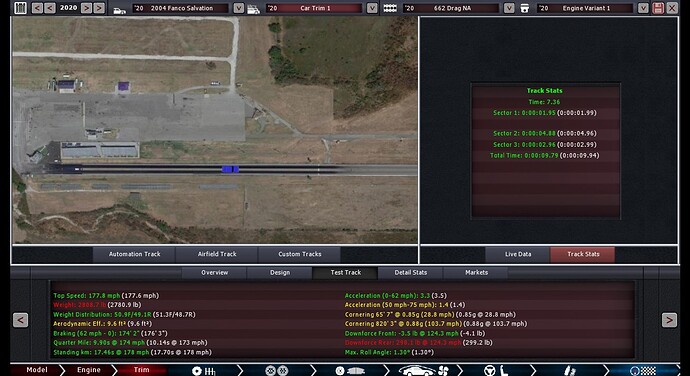