I’ve recreated the Ford Windsor V8 Family in Automation to the best of my abilities.

Family size is 255ci to 302ci. I left out the 221ci due to Automation Variant Limitations (I cannot get the bore small enough.)

The mundane and standard engines are recreated with ease in Automation, while the higher performance variants are a bit more quality spammed to achieve something close to the prototype.

All pre-unleaded fuel engines are tuned using 98 RON, as this best represents the high octane fuel avaliable in the 60s. Do note all engines have been tuned as close as possible using compression ratio, but some leeway is needed due to these engines being recreated before the big engine overhaul. I cannot tune the intake/head reasonate values at this time. I have run all engines with no mufflers to simulate coser to SAE Gross standards, and run most 0.2 points above max AFR (peak Automation power point) to give best-case scenario to all with SAE Gross ratings. All engines in Automation are slightly heavier than their IRL counterparts due to Automation’s generalizations of V8s.

Now this is a special performance engine Ford made in 1962-63. It was not offered to the general public in any regular cars, outside of the Shelby Cobra and a few '63 Fairlanes, but was probably planned to be the factory HiPo version before the 289. Inital reports showed only 100 engines made. This is later challenged by the discovery of engine serial number 137 which was purchased in a 1964 Shelby American clearance sale (Shelby and Ford regularily clearance sold old stock to make room for new stuff, even rare race parts like Boss 302 heads.) Most places claim a 10.0:1 compression ratio, but I did find at least one mention of it having 9.2:1 compression, so for the sake of Automation recreation, I chose to use the 9.2:1 compression. (source via the way back machine: More CSX2000 Photos. )
Also, MetaphosInMotion.com website backs this 9.2:1 compression claim with a picture of a test data sheet in this linked article (though the test sheet also calls out a 6500rpm hp peak and much lower 3600rpm torque peak, so grain of salt, they may be slightly mixed numbers due to the 335hp race version, or just general fluffing for the press). (Metaphors in Motion ) 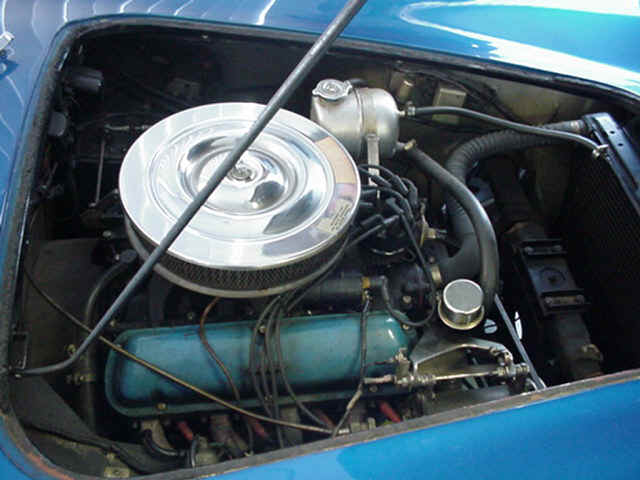 Picture of XHP-260-1 (the first one) in cobra chassis CSX2000. Photo from the defunct csxinfo.net website. 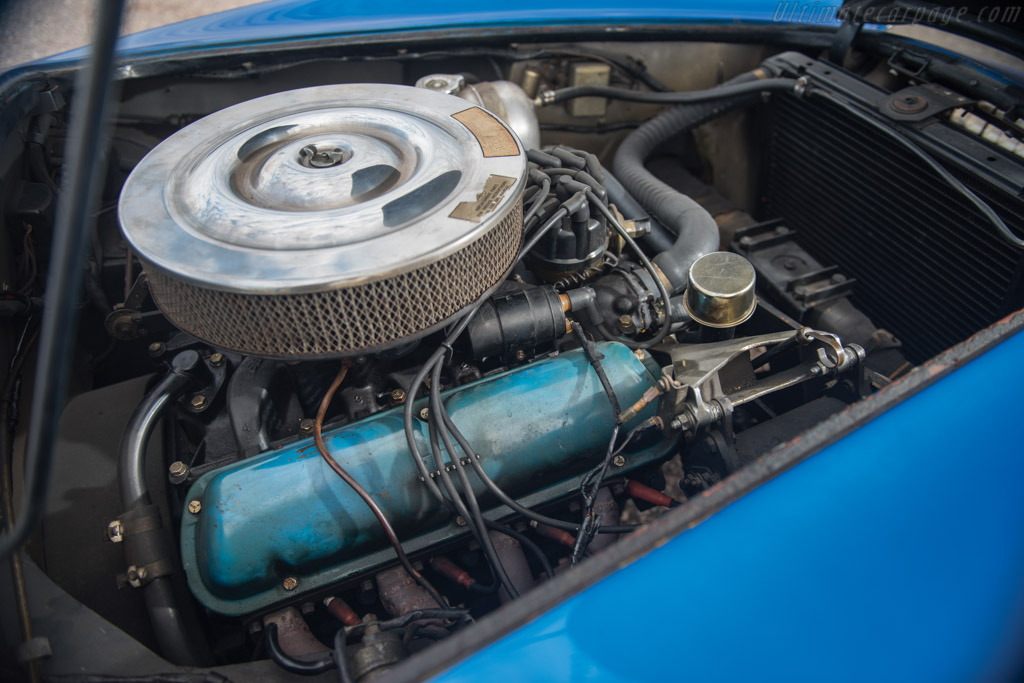 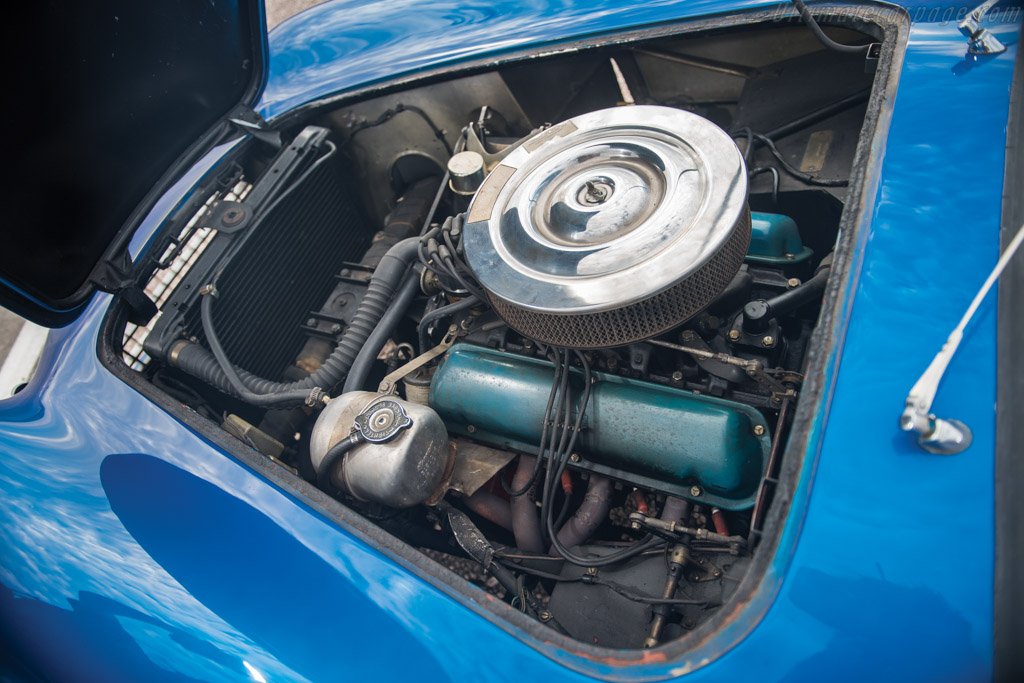 The XHP came in 2 flavors, the standard 260hp version, and the reported 335hp all out race version. The 335hp race version is a bit of a legend, with plenty of rumors around it as well.

First, let’s establish the baseline. The 260hp version was taken, Webbers thrown on it, a flaming cam, and more compression added to get reportedly 11.0:1 get it up to the 335hp rating. The RPM at where it makes 335hp is, well, murky. There are reports that usually say the engine can rev to 8500rpm (some even claim 9000rpm!), and that claim being the redline would make the 335hp no higher than 8000rpm. This still seems like a tall tale. More conservative estimates, and examples of other engines of the same build and family would put the 335hp much lower, likely closer to 6500-7000 rpm as the data sheet above incorrectly used for the 260hp version. Further study against Shelby’s own 306hp 289ci variant with it’s peak at 5800-6000rpm supports this. So, yes you probably could wing the 260 out beyond 7500rpm, but it likely didn’t need it to get to 335hp.

Lastly, and not just limited to the 335hp version, there were no validatable aluminum versions of this engine, in any power level or form. The aluminum rumor seems to stem from the development of the 255ci Indy engine Ford was also producing around the time, as this engine used up to 3 260ci blocks cast in aluminum during development. These blocks were only cast with the sole purpose of research and development toward the Indy race engine. If you want to learn more about that engine, follow the link to JalopyJournal.com (Ford Indy V8 | The H.A.M.B. )
Some sites may still claim the 335hp race version had an “alloy” block, but that is a mixed term that may have confused some to believe it meant aluminum. Alloy is any combination of metals together, and as such a term the cast iron blocks can still be classified as an iron alloy (with other metals like nickel). While most of the time an alloy block will be referring to an aluminum (or aluminium) block, in the case of the 260, it refers to the iron alloy blocks, not aluminum. 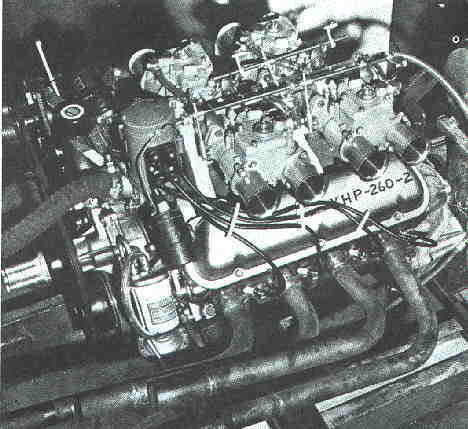 Photo of XHP-260-2 the second 260 engine produced, and the first 335hp version with the Webbers. Curtesy of defunct website 289register.com via the Way Back Machine.

In the Automation recreations, I took some liberties due to the nature of the game.
The XHP-260 260hp version with 4bbl was recreated using the previously mentioned 9.2:1 compression (easier to lower compression to achieve results in Automation when making high-compression 1960s american engine replicas). I used the Performance intake with 4bbl, high timing, and tubular headers to simulate the rough, hand-crafted headers on the first engine XHP-260-1. Results were 261hp at 5600rpm and 268lb-ft at 4500rpm with a 6100rpm redline. Of note, I had to use quite a lot of cylinder head quality to get this engine up to spec.

1964 The year of the 289.
While the 289 was technically introduced late '63, for all intensive purposes we will move into 1964 as the official wide spread release year.

I had to use some high timing to get this power curve near the original.

Automation Replication:
Just like the previous 260hp 260, I had to use quite a bit of quality in the cylinder heads to get this to rev reasonably enough. Also there’s +5 quality in the fuel system, even with the lower 9.4:1 compression I had to use for the Automation replication. The final results: 275hp at 5800rpm, 301lb-ft at 3500rpm and a redline of 6200rpm.

I used some extra quality on the fuel system to keep it from knocking.

Easily the most common 4bbl 289ci V8 Ford made. The K-Code was an option, by default the GT mustang package came with this 225hp engine. I used a little lower compression ratio at 9.5:1 and some fuel system quality to achieve the power curve.

In the next installment, I will continue on to the 302ci variants, the Boss 302, and possibly into the 255ci emissions special in the early 1980s.