Fulland Zingara - time for a sequel

Quick note before I begin: This is an LCV4.1 car.

I’ll start at the beginning. The very beginning. Just over a year ago, I decided I would try to make something similar to the legendary McLaren F1, but in the modern day. The working title for the car back then was ‘Anima Mea’; ‘My Soul’. And it went… Very badly. It was a complete disaster, to be honest.

Even after ditching the car, grabbing a new body, and starting completely anew, the only result I ever got was mediocre at best, and undriveable at worst. Didn’t look brilliant, either.

Skip ahead 5 months, and a DRIVETRIBE video shows up in my feed talking about something called the GMA T.50. I fall in love instantly. So much so, in fact, that I give myself the challenge to make something like it in Automation. I had since learned much about the game’s finer workings, so I figured it might just work out. This time though, I would only take the car’s spirit and mindset, not the full concept - the car had to be it’s own thing to work.

The result was the first Zingara, an early racing version of which made an appearence on this forum. To keep it brief, they worked. VERY WELL.This racing version would go on to be developed to high h*ll (at least, as far as it could go without losing its sense of realism), so much so that it would become the fastest track car I’d ever made, by miles: 1:27,251 around Automation in its final BeamNG form. 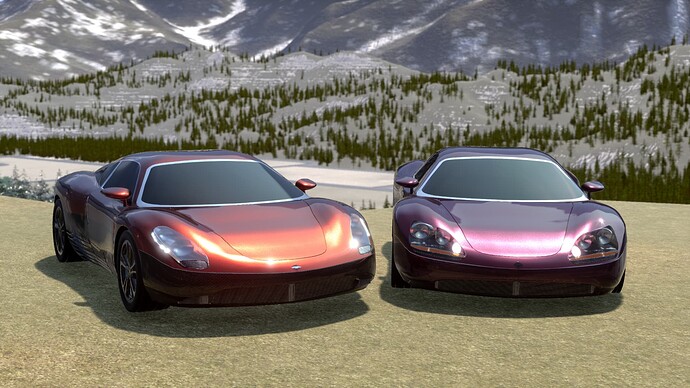 After this, and having learnt a lot about BeamNG’s aerodynamics from the track car plus a load of fixture practise from making the Dimensionale Cinque Molida (see also: JPA Dimensionale Cinque Molida, my most detailed project yet! - #6 by ManBoe), I decided to do a complete rework of this concept. I wanted a prettier body, a full interior, the underbody aero all flushed out, the works. Didn’t care how long it would take.

I pitted three bodies against one another, which got the codenames of Zingara Due, Tres and Quatro respectively. Same engine, options, drivertrain, everything, to see which I preferred. Body ‘Quatro’ won out, hence the presence of the word ‘quatro’ in the model name. I then went on to try and make every little detail of the car, from the headlights, taillights and dashboard to the storage bins and chassis.

Inspiration along the way came from many places. The shape of the taillight housing came from a piece of wood I found, the taillights themselves come from the Volvo C70 and Lampadati Tigon (as does the paint), bits of the interior come from the T.50 itself, the list goes on. In the end, as opposed to the previous Molida’s 24, it took just over 32 hours of constant work and 11 backups (hence the ‘XI’) to get to the final product - BeamNG testing not including.

And boy, am I proud of what I have made. 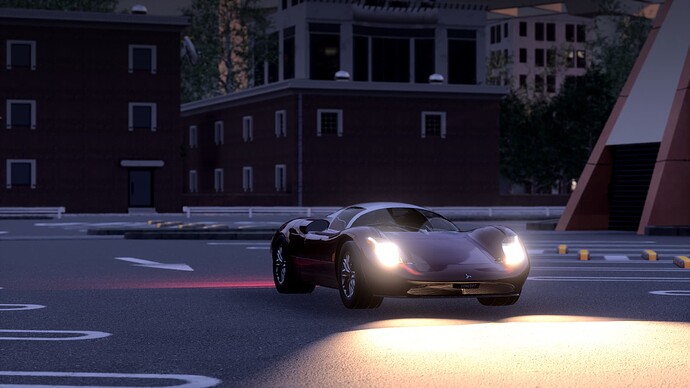 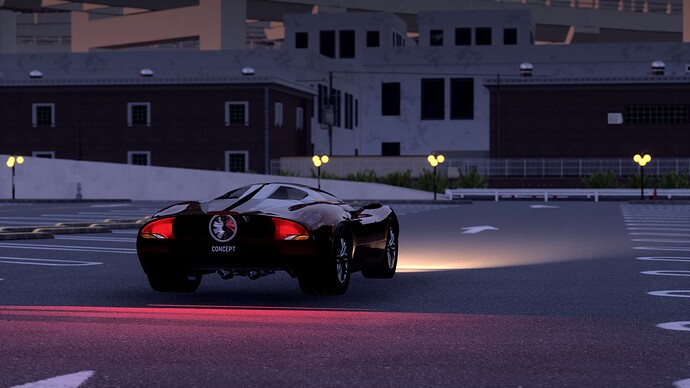 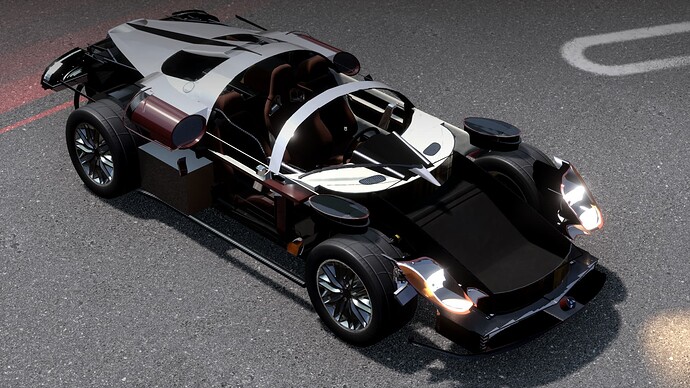 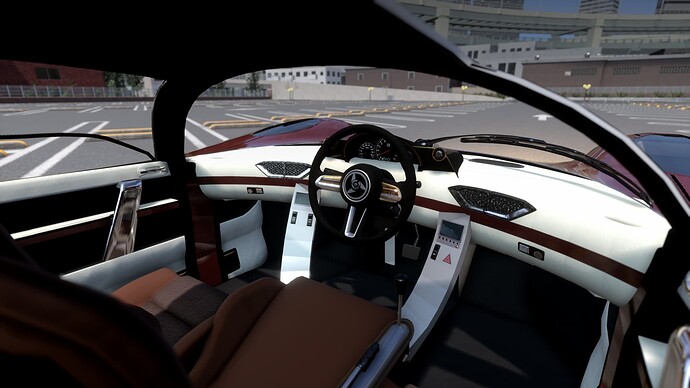 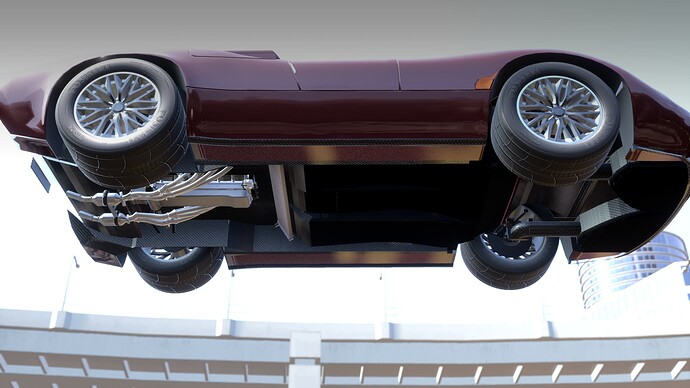 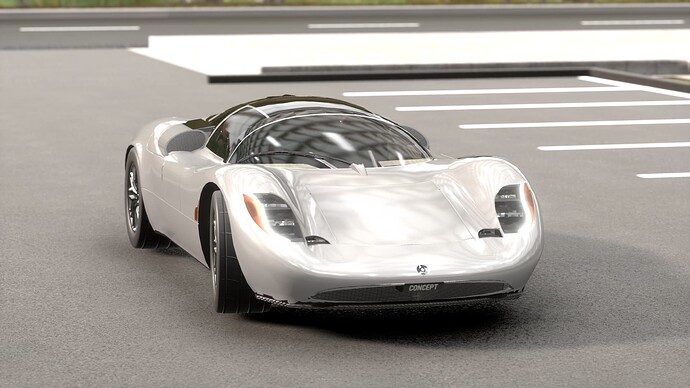 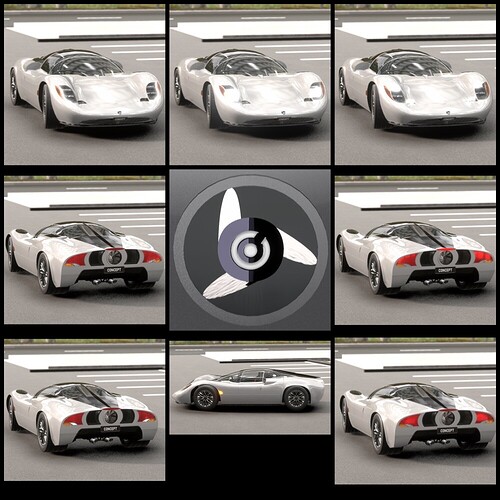 This is easily my best work so far, and it was scheduled to be my last true project before making the switch to LCV4.2 - in fact, on another computer, I was already learning 4.2’s ropes while this car was still being made.

Now, obviously she isn’t perfect. This was a massive undertaking for me, far more detailed than anything before it, so corners had to be cut. I stuck to a favourite CGP Grey quote of many as I was making the car: ‘The cost of perfection is infinite.’ As such, several large elements of the car (most notably the two pillars next to the driver’s legs and the engine bay) are nowhere near as flushed-out as I’d like. But, then, the parts that came out just right were well worth it.

Allow me to walk you through some of the finer details.

The headlights, taillights and indicators are all a fully custom design - not a single pre-existing light fixture was used to make the shapes. They were cut out of the body, filled with halogen reflectors and LED strips in their proper place, and then covered with glass.

The chassis… Doesn’t really exist. In fact, the combination of the frunk, underbody aero, cabin floor and bits of the engine bay ARE the chassis. I got this idea from seeing the chassis of a W30 Toyota MR2.

The mirrors are funky, as well. They’re contained withing the front wheel… bit…, under a piece of glass that’s flush with the body. Cool? Yes. Safe? Absolutely not, you’d be blinded the very first moring the sun is out.

Besides the frunk, the car has two storage compartments just behind the doors. These fold upwards like gull wing doors, and are just large enough to carry one KLM-approved suitcase (the one you can take in the cabin with you) each. Yes, I checked - although, in hindsight, my methods of finding the dimensions of the fixture may not have been completely reliable. You can see where the case would fit in, too - in the screenshot where the body is disabled, the case is represented by that big grey cube just in front of the rear wheel.

There are less fine elements as well, though. The engine bay, for one, is very desolate. I had wanted to place the exhaust much higher up, add proper intakes (including ram air) batteries, and so on, but due to how ****** low the engine sits in the car that wouldn’t work. Again, 4.1 car here.

I am working on a 4.2 port, but I ran in to some trouble with the wheels, so that will come in a different post once it’s fixed.

The underbody aero on the front of the car is meh, as well. I wanted the section that redirects ait from the first radiator to the front brakes to be smooth, so as to allow for the air to flow up, create a low pressure zone, as as such suck the car down - but I didn’t have the patience, didn’t have the skill, and was being annoyed by the fixtures constantly sliding around when you scale or rotate them, so I let that be.

Now, the rest you’ll have to see for yourself. Zip file with everything is at the bottom, more on that later - now let’s talk about the car itself.

She has a 3.965cc V12, revving to 11.700RPM and making a smidge over 600BHP. The car weighs only 800-and-change kg, so this thing is BALLISTIC. Thanks to the aero, she has an unreal amount of downforce, as well, able to reach over 3 cornering G’s. I probably should have made the suspension stiffer, shouldn’t I… Yeah.

I didn’t do much precise performance testing, but I can tell you that the top speed sits somewhere around 415KM/H (way too high if you ask me, that should really be around 390, if not less), and 0-100 can take place in about 2,6 seconds, maybe even less. I got somewhere around 2,4 once, if I remember correctly. What I can also tell you is that she handles surprisingly well, both at high speed and at low speed.

Anyways, before I give you the ZIP file an IMPORTANT SET OF DISCLAIMERS.

1.This car has, to my best estimate, around 600 fixtures. If your PC is not up to spec, your game will NOT like having this car, so just take the Beam mod and roll with it.

With that out of the way, here’s the mod list and ZIP file. I’d be most glad to hear your feedback! Enjoy!
Mods:

Certainly the closest thing to a T.50 replica I have ever seen - the use of the 60s Le Mans race car body certainly helped. Well done!