Gasoline though the years

Ok this is what I have hunted down for the U.S. First two different post from people who might or might not know what they are talking about and then i do a second post from a source I would trust more.

#1 The History of Gasoline Octane

As the high compression engine era was gaining steam in Detroit during the early to mid 1950s, the need for higher octane gasolines was becoming more and more apparent. When automobile production resumed in 1946 following World War II, gasoline octanes in the United States averaged at 79 for regular and 85 for premium and those numbers climbed year after year until 1954, when premium gasolines were rated as high as 94 octane and regular at 86. Oil companies were promoting their gasolines, especially their premium grades, with claims that their fuels increased power and gas mileage while cleaning out the carburetor and other engine parts to wash away accumulated carbon and other deposits while regular usage prevented the future buildup of such. Among the additives widely promoted by leading oil companies were Texaco Sky Chief with Petrox, Super Shell with TCP, Mobilgas Special with a Double Compound ingredient and Sinclair’s Power-X featuring a nickel additive.

As Detroit continued the horsepower race unabated in the mid-to-late 1950s, the oil industry responded by continuing to increase the octanes of their gasolines, and a few even went the extra mile by introducing “super-premium” fuels which were even higher in octane that the premium grades. In 1956, Sunoco introduced its “Dial A Grade” blending pumps that could dispense five different grades of gasoline, later increasing to eight, ranging from subregular Sunoco 190 to superpremium Sunoco 260. That very same year, Esso introduced a third grade of fuel called Golden Esso Extra, which came in a gold pump and had an octane rating of just over 100. That was followed in the spring of 1957 by Gulf, which introduced its super-duper Gulf Crest that was dispensed from a purple pump, and Chevron debuted its Custom Supreme grade in the western states.

By 1958, oil companies generally took a position concerning the number of gasoline grades offered with the greatest majority choosing to stick to just two (regular and premium) and simply increasing the octane ratings of both grades of gas with the premium fuels coming very close in octane to the super-premiums offered by some competitors. That year, regular gas averaged at about 90 octane and premium hit the 98-99 mark. With compression ratios on Detroit’s hottest engines reaching the 10 to 1 plateau and higher, nearly half of all 1958 automobiles were powered by engines requiring premium fuel. And that included virtually all medium and higher-priced automobiles, leaving only a few lower priced cars powered by engines capable of using regular fuel including most Ramblers and Studebakers, as well as Ford, Chevrolets and Plymouths with standard six-cylinder or small V8 engines.

But the advent of smaller compact cars with more economical engines, both domestic and foreign, along with detuned engines in some larger cars, slowed down the octane race a bit and by 1961 only one-fifth of new cars were powered by engines that required premium or super-premium gasolines. Motor Trend magazine noted the trend toward economy that year by pointing out that Chrysler Corporation had reduced compression ratios across the board on standard engines to burn regular gas, a move that may reduce miles per gallon fractionally but give you more miles per dollar. “Five years ago, new car buyers swallowed premium gas as a necessary evil; today a salesman has to have a good reason for specifying it.”

With a smaller proportion of new vehicles on the road requiring high-octane gasolines and the octane ratings of both regular and premium grades continuing to climb, demand for the more expensive super-premium grades, never really that high, dropped dramatically. In the fall of 1961, Esso and Gulf both discontinued their super-premium grades of fuel in favor of lower octane fuels to supplement their regular and premium offerings. Esso increase the octane of its premium Esso Extra and introduced a new middle grade of gas, Esso Plus, which was inserted in price and octane rating between Extra and their regular fuel. Gulf took a different direction by replacing its super-premium Gulf Crest with a new sub-regular product, Gulftane, which was priced about one or two cents less than its Good Gulf regular - and also designed for vehicles that could use gasolines with octane requirements lower than regular grades. In the process, Gulf created a subregular product that was priced on par with regular gasolines offered by cut-rate independent gas stations that generally sold gas for a few pennies less than major-brand stations - sparking off “gas wars” in many areas of the country where prices often dropped as low as 18 cents per gallon for regular and subregular grades (compared to the prevailing normal regular fuel price of 25-26 cents per gallon).

As the subregular and middle grades of gas came to market in 1962, the average octanes of gasolines in the U.S. now stood at 93 for regular, 99 for premium and 102 for the few super-premiums still left on the market. Those numbers would increase only slightly in the next few years to around 94 octane for regular, and 100 for premium by 1967.

By this time, other oil companies jumped on Sunoco’s bandwagon by offering blending pumps dispensing several grades of gasoline from one pump to tailor fuels to a particular vehicle’s octane requirement. Signal Oil Co. offered seven different grades of gasoline through its blending pumps at its Hancock and Norwalk stations in the Western United States. In the Mid-Continent region, Conoco began testing four-grade blending pumps in some markets in 1965 and introduced the concept throughout its marketing area two years later. In addition to Regular and Premium, Conoco offered its sub-regular Conotane (similar to Gulftane) and a Super grade between Regular and Premium similar to Esso Plus. A similar four-grade pump setup was offered by Skelly that included Skeltane (sub-regular), Regular, Special (intermediate) and Keotane (premium).

The development of true high-octane gasolines came to a screeching halt (along with the musclecar era) as a result of the Clean Air Act of 1970, which stipulated many federal mandates for automakers to reduce emissions of their engines. With that, General Motors President Ed Cole announced that his company’s engineers found the answer to meet these ever toughening standards - a catalytic converter, which got the job done but required the use of unleaded gasoline. As a first move toward the 1975 models that would be equipped with such devices, GM reduced compression ratios on all of its 1971 engines to permit the use of low lead, regular leaded or unleaded gasolines and other automakers soon followed. This move spelled the end of the “octane race” and as unleaded gasoline was being phased in at most U.S. service stations during 1974 in time for the 1975 and later models that would require such fuels, the higher-octane premium and super-premium leaded fuels gradually disappeared from most stations - leaving only lower-octane leaded regular and unleaded grades. By the late 1970s/early 1980s, the last of the leaded premium grades disappeared as oil companies introduced new premium unleaded fuels that were higher in octane than the unleaded regular fuels (91-83 vs. 87) - but still lacked the moxie of leaded premium fuels, leaving drivers of older cars with engines requiring high-octane gasolines with few options to keep their classic rides intact without undue engine knock, creating a cottage industry for octane boosters and, with the recent phaseout of leaded gasoline altogether, additives to replace lead as a lubricant against valve recession.

#2 By the way, the 93 octane of today is actually not that much less octane than the octane of the Premium pump gas of the 60’s and early 70’s. Here is why:
I used to work for Hess Oil company back then. As many of you may remember, 100 advertised octane was common and Hess even had 101 octane for a few years. Sunoco260 gasoline was 102 octane. Those octane ratings sound very high compared to today’s octane ratings, but they were not as much higher as you would think. That’s because the advertised octane back then was based on a different measurement than we use today. The reason is that there are 2 ways to rate octane. One is called the “research” octane number and the other is called the “motor” octane number.
The research octane number is a higher number than the motor octane number, so when oil companies used to advertise their Hi-Test gasoline, they used the more impressive research octane number, in this case, around 100 octane.
But “motor” octane is a number about 10 points lower than the Research number. The oil companies didn’t advertise that lower number.
In the early 70’s, the government decided to require oil companies to post an average of the 2 different octane ratings, which lowers the octane rating number for the same fuel that had higher numbers before. So, ever since then, when you look on a gas pump, you’ll see a sticker for the octane rating that says “R+M/2”, which stands for Research octane plus Motor octane divided by 2, which is the average of both rating numbers.
Therefore, the old Premium from the 60’s, that was 100 Research octane, also had a Motor octane rating of about 90. So that same old 100 octane Premium would today now be posted as an average of 100 Research octane and 90 Motor octane, and would be 95 octane. That’s still a little higher than the 93 octane of today’s Premium, but not as big a difference as most people think.
In 1975, all NEW cars had to use Unleaded Only fuel. It became against the law to put leaded fuel in an unleaded car. Unleaded gas prices were a little higher and some people would try to put leaded gas in their car to save a some money. There were adaptors sold so you could adapt the larger leaded gas nozzle to the smaller hole of the unleaded gas filler. Some people just cut the hole bigger, so the larger leaded gas nozzle would fit. Attendants were asked to put leaded gas in unleaded cars sometimes and the customer would get mad when the attendant said it was against the law for them to do so. Anyway, the stations had to convert gas pumps to unleaded gas, change the nozzles, the signs, etc. The stations still sold leaded gas too for a while, and still had some of the higher octane premium leaded fuel for earlier cars that were allowed to run leaded gas. It would’ve been rated at about 94 or 95 octane, because of the new R+M/2 octane rating system. Gradually, leaded fuel was phased out though, and I think it was only a year or so before you could only get unleaded.
Probably more than you wanted to know, but some might find it interestin

And now the good stuff from Popular Mechanics Feb 1971. Note the graft on the bottom of page 125. 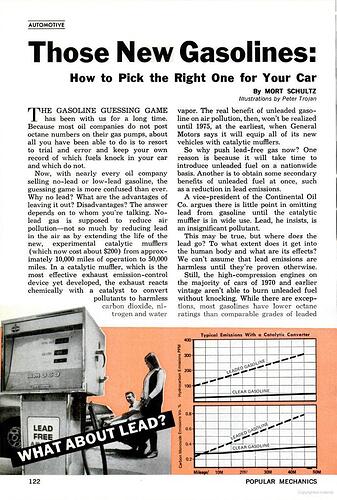 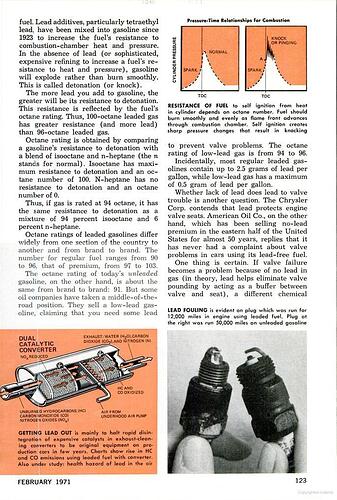 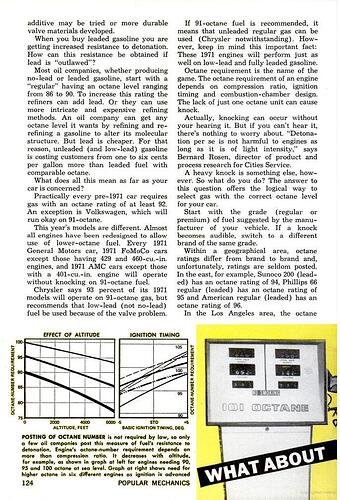 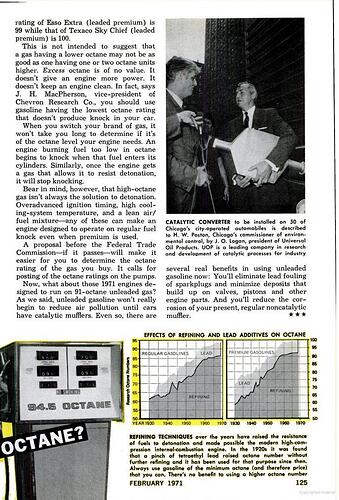 Top stuff! This will be very useful when we get to the stage of setting up when fuels arrive where

That’s great, and it really was a great loss when real high octane petrol left the market. However, E100 is also 100 octane RON, if you have a flexible-fuel car, or a pure ethanol powered one (Koenigsegg… or pre-2003 brazilian cars).