Here is what "Old body penalty on saftey" IRL

difference between advanced safety vs basic 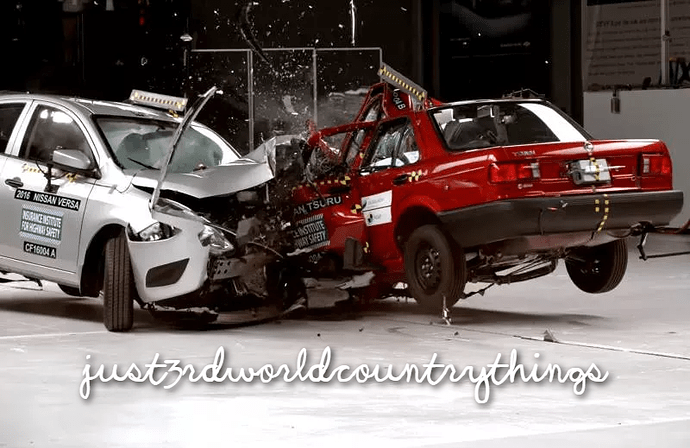 This is a brilliant example of it, glad that this video exists so people can stop complaining about it

Leo is from Brazil.

Talk about some #UnsafeAtAnySpeed cars right there

I love this video. Whenever I hear people getting nostalgic about old cars because supposedly “they don’t make like they used to” I just show them this. Now don’t get me wrong; I love classic cars as much as any car enthusiast. But I like them as historical artifacts and for their simplicity, not the delusion that they are somehow better than modern cars.

Its actually kind of amazing how poorly educated people are in terms of automotive safety. Another thing I frequently hear is people buying trucks, SUVs, and full size sedans because “big cars are safer.” It baffles me because its not just wrong; its the antithesis of the truth.

Another thing I frequently hear is people buying trucks, SUVs, and full size sedans because “big cars are safer.”

Quick, somebody post a video of a small overlap frontal collision test on a big SUV or 4WD!

thanks. That’s actually not that bad, compared to previous years, before small overlap became a big thing. There’s a little bit of shift but minimal cabin intrusion and the passenger cell stays remarkably with the shock passing right through considering that it looks like a good 50mph against an immovable object.

I agree that old cars are technically inferior in essentially every way, but the styling of modern cars is very questionable. Granted modern styling is safer and more aerodynamic, but I think there is much room for improvement, especially if some aero is sacrificed.

I think most of the time they say this, it’s really about the minimal use of plastic on an older car.

My family recently hit a white-tail deer with our 1997 suburban at about 45mph (while braking hard). The deer was a 6 point buck we estimated to be 200 lbs or so.

The insurance “totaled” the suburban just due to the low value of it, but the damage was relatively minimal:
Bumper pushed back slightly
plastic in gill cracked
headlight busted (was already partly broken due to a turkey hit)
upper turn signal busted
bug shield shattered
hood slightly buckled (and this being the MOST OBVIOUS damage) 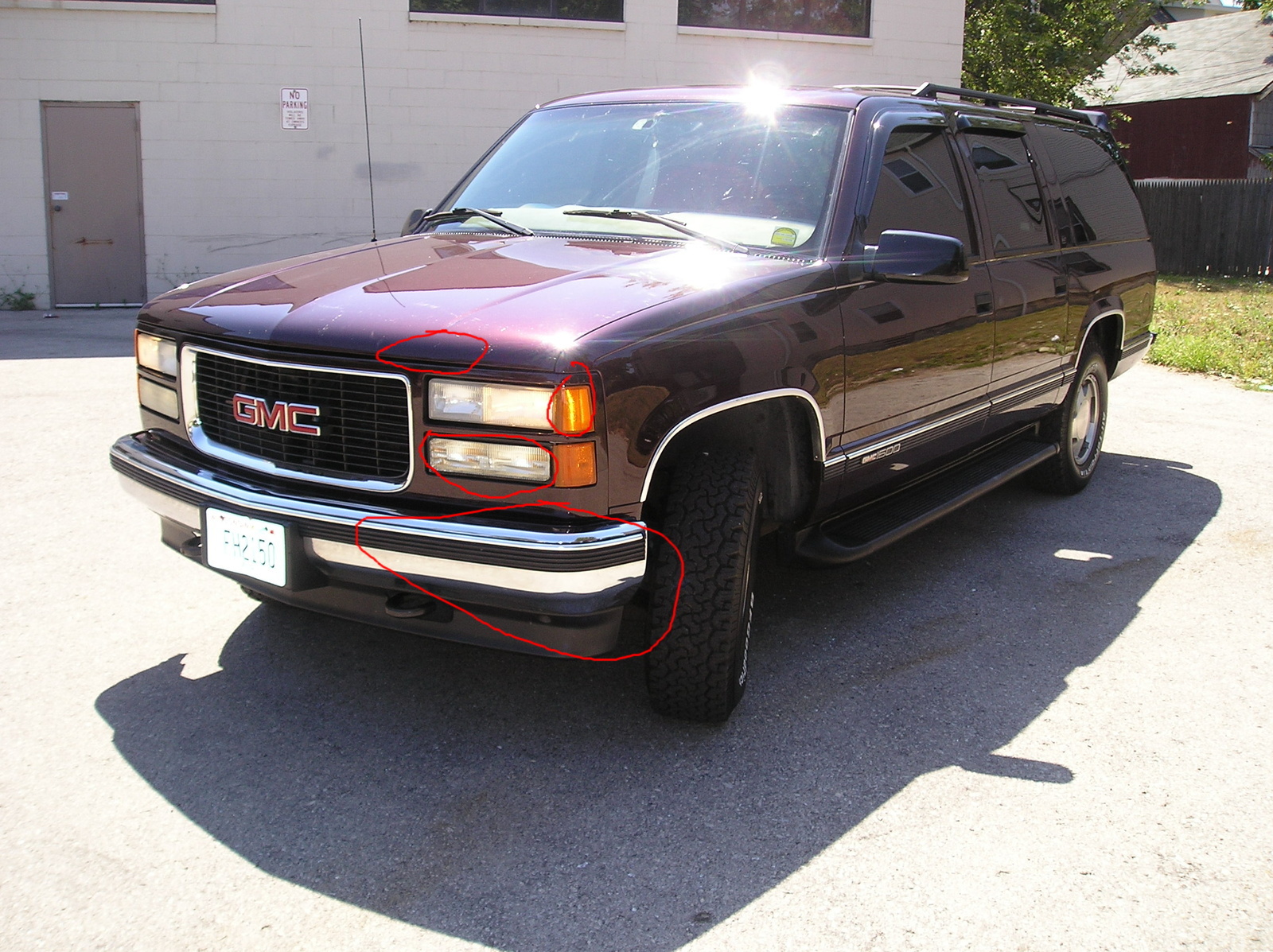 The suburban was 100% drive-able and no person was hurt.

The body shop that did the estimation stated that we were lucky our suburban was as old as it was. The reason? The bumper and its mounting. Our 97 has a steel bumper mounted directly to the steel frame.

If we had hit the deer with an 2008 Suburban, it would have been much more damaged in the same circumstances. Why?

The front bumper on an 08 is also steel mounted to the steel frame, but it also has a lot of plastic molding to make it more “aerodynamic and sleek looking”. The deer hit would have more visual damage, as well as actuall due to how all the plastics are molded and connected.

Here’s a picture of an 08 suburban to illistrate what I am saying:

###Point is: Due to the new cars use of plastic, especially as plastic molded bumpers, along with many other factors, people get the impression that newer cars are “cheap” and therefore “not built as well”.

If a car feels “light” and “cheap” due to the extensive use of plastic, it gives off the impression of “poorly built” and “less safe”. This is a known phenomenon.

Example:
My Grandpa use to sell hand crafted wood miniatures and carvings at Renaissance festivals. He is a fantastic woodworker, but whenever people inspected his miniatures, they would always associate a “heavy” or “weighty” feeling with “quality” and “craftsmanship”. If it didn’t feel weighty when they held it (ie it was hollowed out in the bottom) they were less “impressed” with it.

Point is: Due to the new cars use of plastic, especially as plastic molded bumpers, along with many other factors, people get the impression that newer cars are “cheap” and therefore “not built as well”.

Not to sound like an asshoole, but doesn’t this just prove my point? Judging a car’s build quality based on the incorporation of plastic is incredibly superficial because it ignores any and all benefits of modern engineering in favor things that are of lesser importance than occupant safety.

The only time a large vehicle holds an advantage is when being hit by a larger vehicle, but it’s mostly about height. The floor of a car is one of the strongest parts, so an SUV t-boning a sedan will be catastrophic for those in the car. SUV t-boning another SUV, not as big a deal, the impact is better distributed. New trucks and SUVs have a lower front end to avoid these issues, but here’s a crash test using an older model that’s substantially taller:

Clearly the extra height doesn’t help with stability, so rollovers are the dangerous downside of it. Of course there’s also the issue with transport trucks (another thing not yet entirely solved by regulation). A truck or SUV wouldn’t underride like this because of its height:

A truck or SUV wouldn’t underride like this because of its height:

I’ll try looking for it, but an F150 rear ended a school bus earlier this year somewhere in Quebec, which ripped off the whole passenger side roof (where thankfully no one was sitting). They aren’t tall enough to not underride.

Will edit when I find the article.

An other thing I’d be interested in seeing is a more modern video of an SUV vs sedan crash, as side crash protection has come a long way since '92. 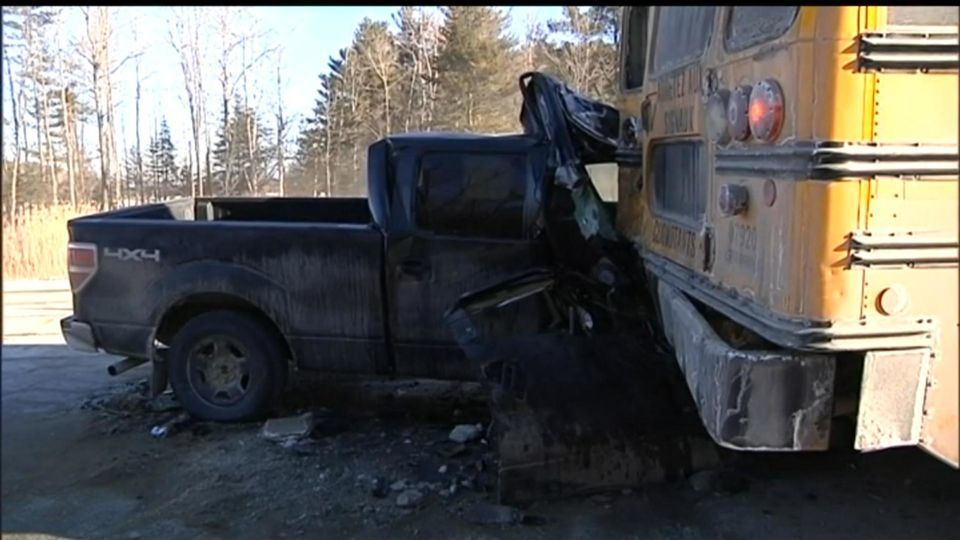