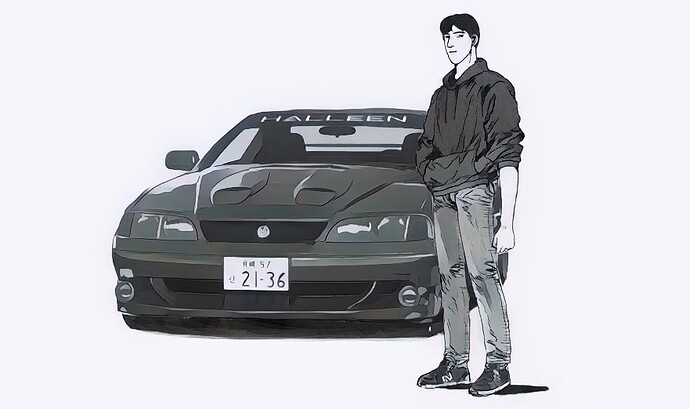 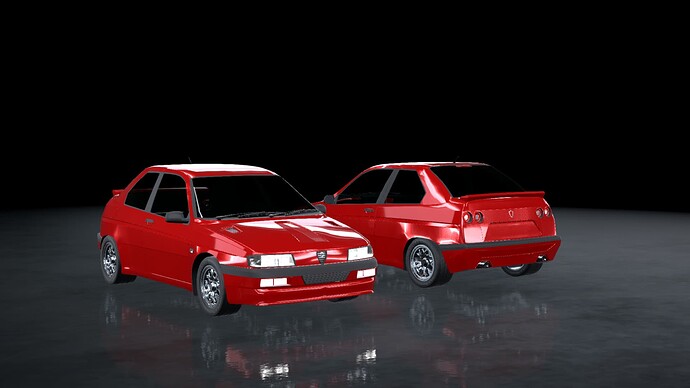 This low production homologation special shares its bodywork and chassis with Chittai C, a competitor of BMW E36 compact, although here, the body is entirely fashioned in aluminium.

6T/2000 refers to the all-new turbocharged four-cam 24 valve 2 litre 60° V6 with all forged internals. It is designed to compete in 2 litre classes and features in the street car in a detuned version producing an ample 250 hp moving 1100 kgs. Also, the car tax in Italy is kept acceptable. 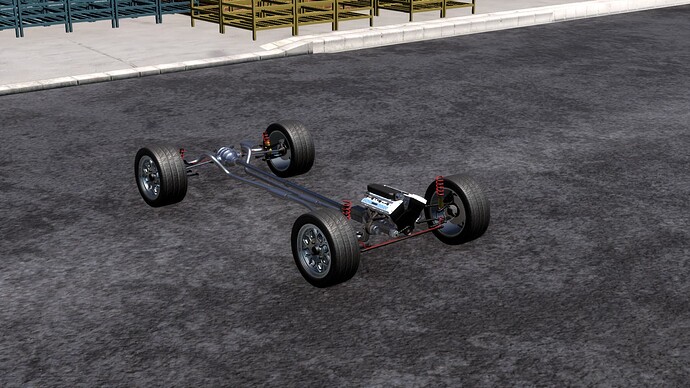 Tiffosi Nippon is proudly representing a select number of examples imported as a variant of regular Chittai C, which our lawyers say is definetly very legal. Starts at 3.780.700 Yen (~ Automation$37.000) 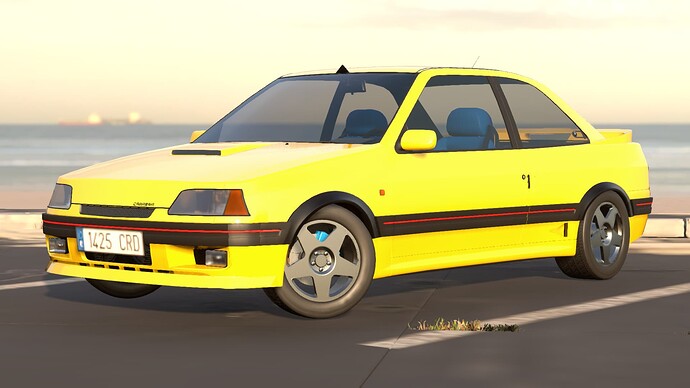 People want their cars to be safe, economical and environmentaly friendly. Everything the XV6 wasn´t. The last mainstream RWD car Cabrera made after the Boreas discontinuation, it aimed at getting all the performance they could squeeze out of the last gen Boreas chassis. The body was now made of fiberglass, the top-of-the-line V6 engine was extensively modified to get more than 200hp without compromising reliability and finally the driveline was reinforced to cope with all the extra power. 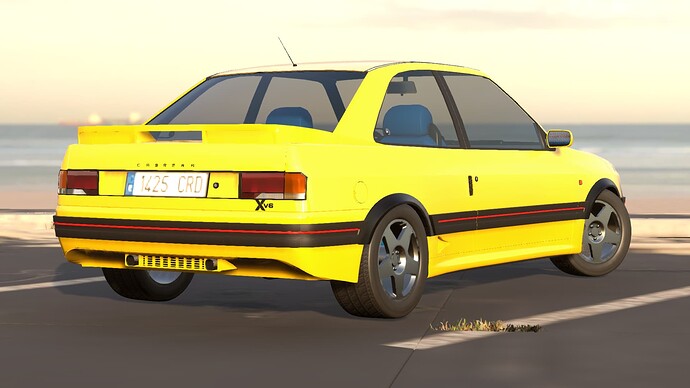 This particular example was slightly modified, equipped with wider wheels and the rear seats have been removed to get weight just under 1000kg 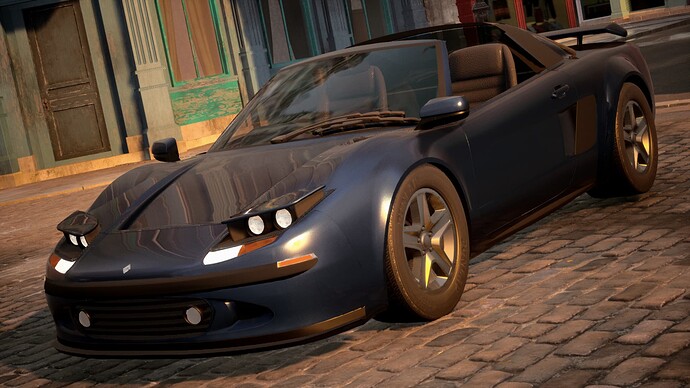 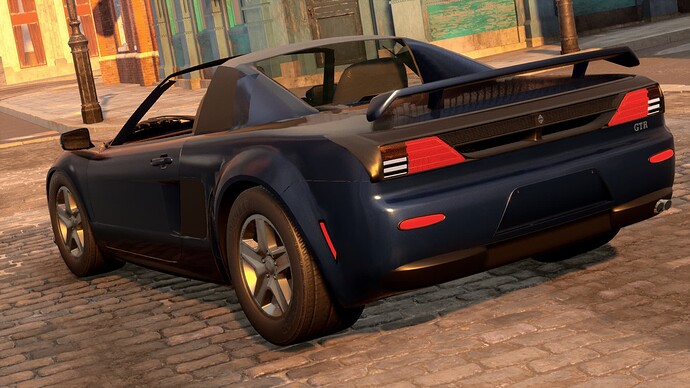 "That’s a great deal if ever I’ve seen one." 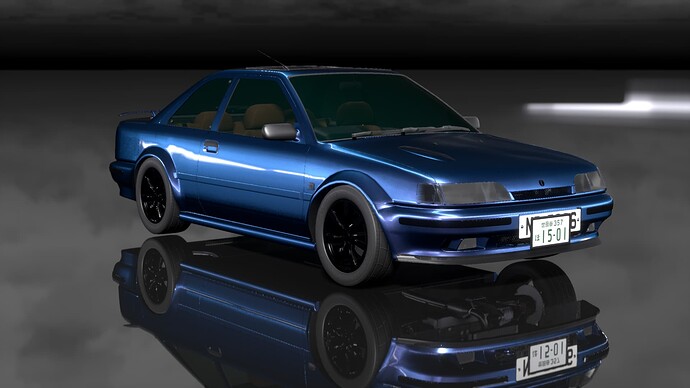 Using the same platform as the Steed sedan and estate the coupe offered a more sporting design and driving feel. The coupe is slightly wider than the sedan model with standard fitment removeable glass panels in the roof for open air motoring.
The Turbo was the top model available with a 2.0 four cylinder KT16 engine, driving the front wheels through a 5 speed gearbox and mechanical limited slip differential.

This particular model was registered in the UK and imported into Japan for touge racing. It has a range of upgrades increasing power and road holding ability. 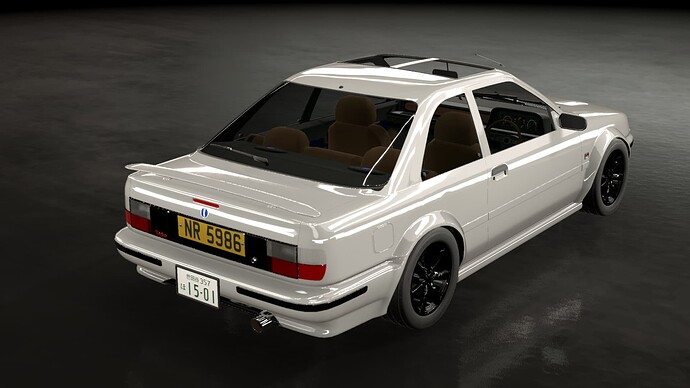 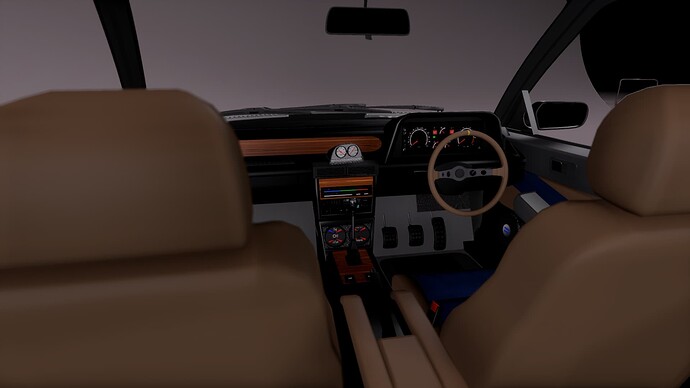 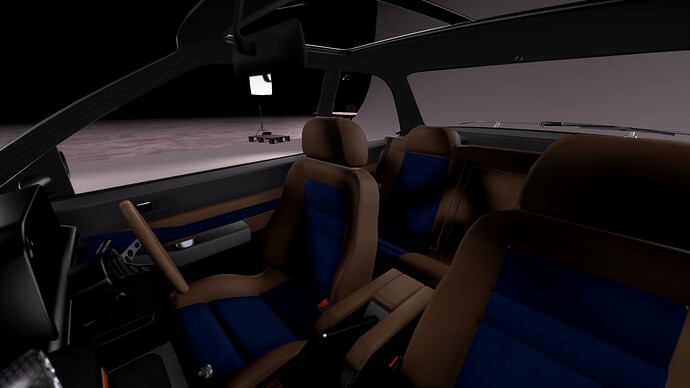 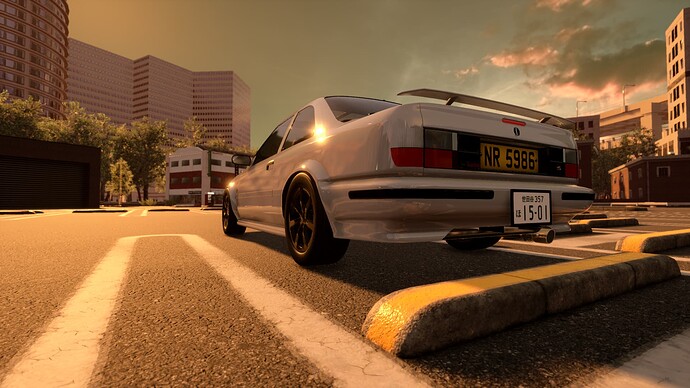 i’m too lazy to do CSS 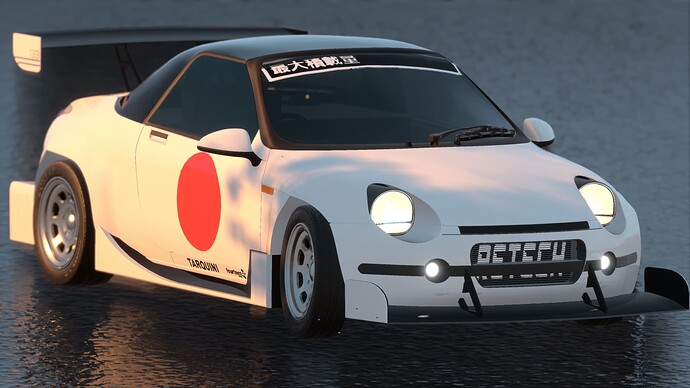 This Karuma Ghee began life as a normal production car, until one day it had it’s engine ripped out and replaced with some 2.0 litre V6 found in a nearby junkyard.

now you can see where it earnt it’s name. 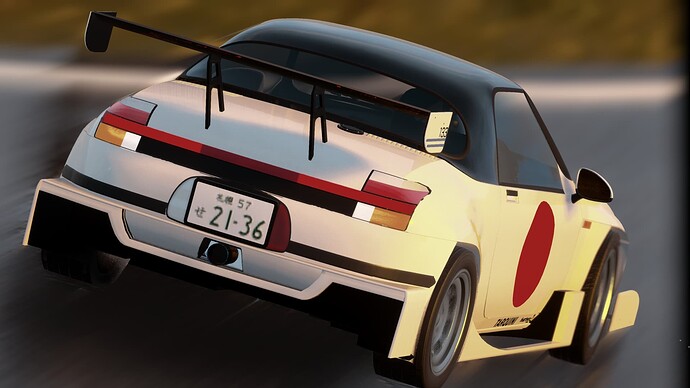 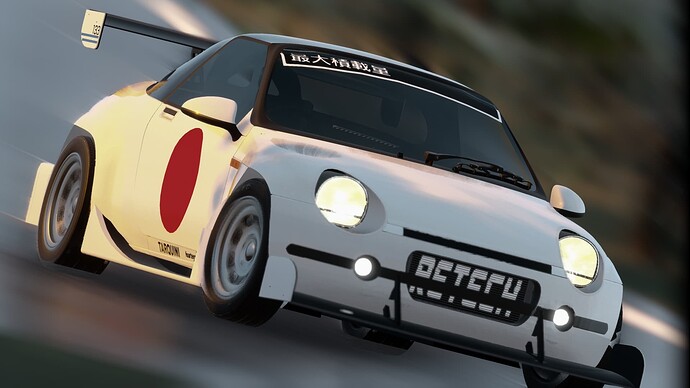 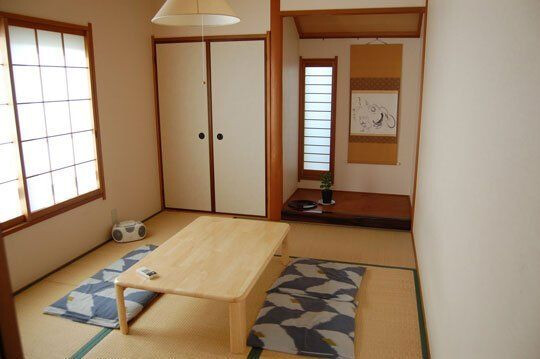 Tanaka was just hanging out in his reading room, reading Option’s magazine while listening to his favourite music on his portable radio. Suddenly, he heard a car parked infront of his house and he peered out from his window and saw Yui getting out from her car with a basket full of papers on her hand.

Tanaka was curious why was she bringing those to his house, he then walked to the front door and opened the door even before Yui knocked on the door.

“Yui? What’s with these papers? You have problem filling these tax papers? Heh…” Tanaka sarcastically said to Yui.

"No dingus. Remember when you said you’re looking out for new people for our club? Here they are, i asked them to come to my house and filled out these registration forms. " Yui replied.

“Wait. With all of these registration forms? We’re street racing club, not an entrepreneur club. Anyways, just come in and drop these in the living room, we’ll check out on how many are these guys interested on our club.” Tanaka greeted Yui to came in while grabbing a few forms from her basket to read some.

After Yui puts her basket on the table, she said “Alright, we have 23 people at the moment and may expecting more after this since they are more people interested in this challenge and can you be a sweet prince and check out each people’s info to make sure we’re not dealing with wannabes?” Yui asked to Tanaka.

“Alright fine, my dearest princess. I will do that…” Tanaka sighed and checks on each forms.

After an hour of checking each form’s details, Tanaka felt relieved and let out a huge sigh afterwards. Yui shook her head and putting back the forms in the basket.

“Tired already? I thought you’re the best driver on Hakone has alot of patience and such.” Yui snickered.

“I like to pretend to act tired, heh. Oh by the way, Takaki from Wangan division is coming here this night and wanted us to hang out with him at ramen shop. Wanna come?” Tanaka asked to Yui.

“Oh sure i’m up for it but uh, i gotta go. I got some important matters to deal with.” Yui looked at her watch and picked up the basket. “Thanks for helping me, by the way.” while Yui heading out to her car.

“No problem, my princess! Always happy to help.” Tanaka then grabbed the magazine and continuing his read.

Just one more day left! Whoever is not done yet, please send in before the deadline hits and whoever did send in their entry but did not get mentioned, just let me know.

Thought it was bins, if it was because my car would be at the frontline 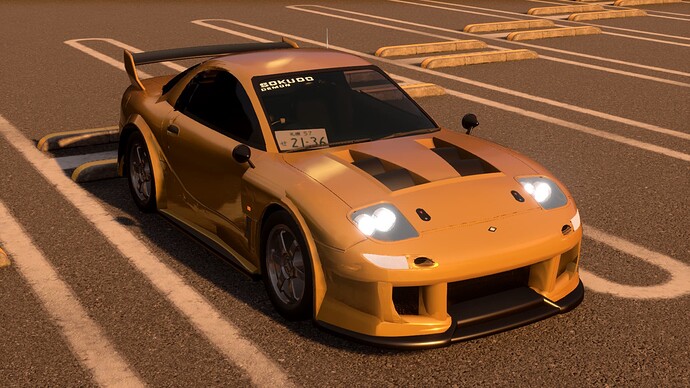 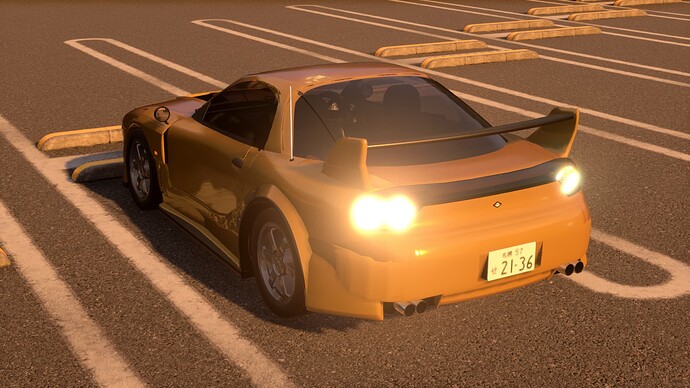 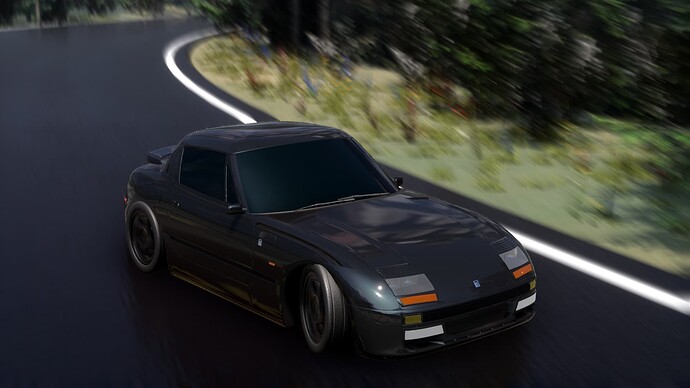 Daiya Murakami is a 27 year old, moderately well to do tech professional, with a penchant for cars that go fast. And who could blame him - the whole engineering behind them was fascinating, and he grew up in the time of Keiichi Tsuchiya and other greats! Now that he’s made enough money to afford a nice, fast car, he wanted to get started on fulfilling his dream of being a racer. Where better to get started than with a local club down the Hakone?

His choice of ride here is an all-black 1994 Munot Levant, a hardtop roadster, in the topmost GS Turbo Super trim which he calls “Kurokaze”. Moderately lightweight, with a 2.2L turbo inline 5 and AWD, Daiya hoped that it would be an ideal car for tackling Hakone. Since it’s also his daily car and more importantly, not cheap, Kurokaze is actually largely stock, with Daiya’s only major modification being the addition of high quality performance tires and a retune of the suspension. Not that Kurokaze necessarily needed much more, since it came with a 300 PS engine. Plus, he was already driving at his limit.

With his app sent into the club, Daiya waited anxiously for the fated tryouts date. Would he be able to compete against so many skilled drivers?

Welcome to the big leagues 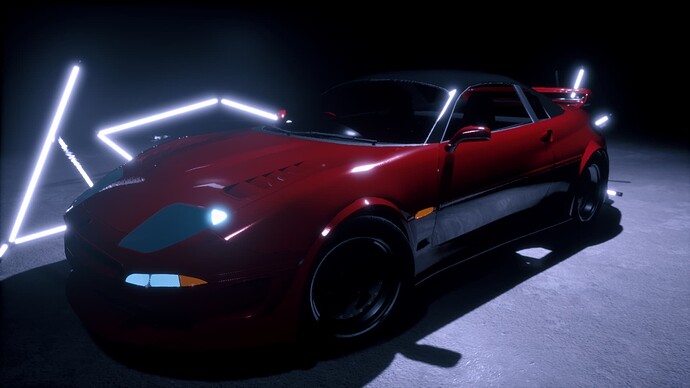 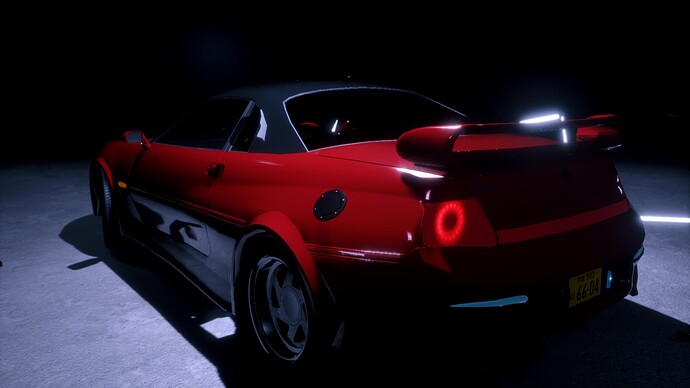 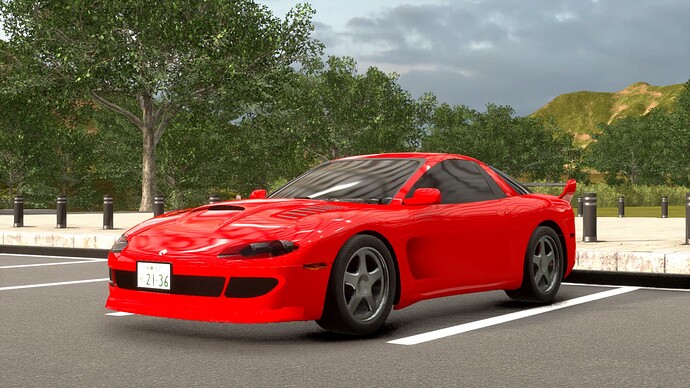 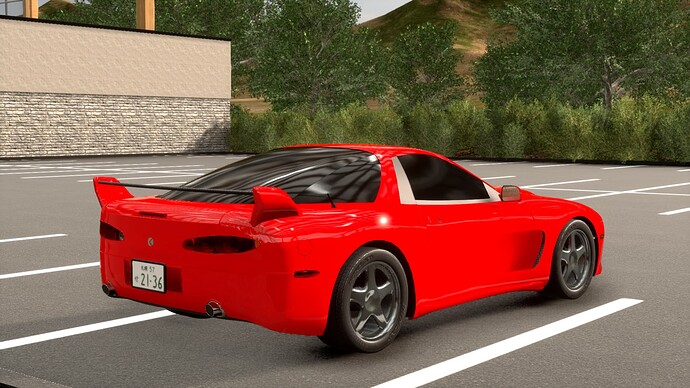 This vintage kei sized sports coupe has been brought up to date by its artistic owner, Storm Breedlove, a transplant from northern Britain who’s just accepted a position at TEGA as an animator. 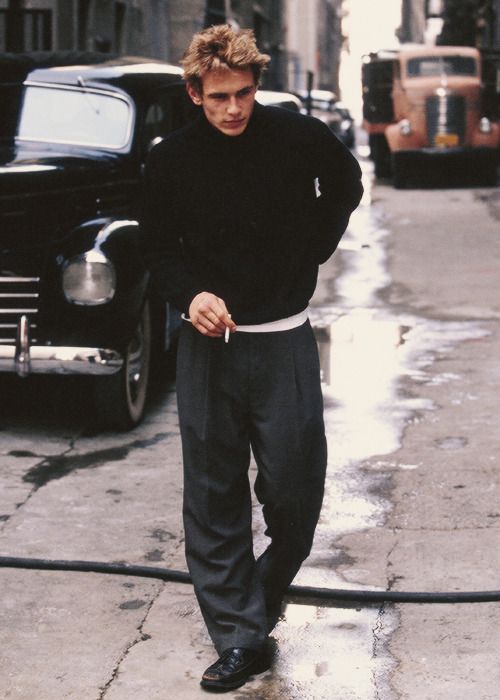 Since he wanted to live in a slightly more rural setting and commute in to work like he did back in Britain, bringing his '70 Midlands Io sprint over with him was an immediate decision. Nimble enough to make it through small Japanese streets with ease and powered by a 1.6 l motor small enough to not be hit too hard by displacement taxes, the sprint fit his needs nicely and as he found out, was a joy to throw into the curvy mountain roads of japan. Since arriving and discovering what he equates to a Japanese version of the Nürburgring as his daily commute, Storm has since upgraded the Io sprint to match contemporary 1994 sports cars like the eunos roadsters he sees blitzing down the motorway. He’s also taken to putting stickers from brands he’s used to modify the car on each of the mechanic’s doors either side of the bonnet, where he keeps all the essential tools to deal with any foibles that come up from owning a classic British sports car. He has upgraded the interior with the higher level of tech he has access to now that he’s living in Japan, fitting a premium sound system and figuring out how to heat the seats. He’s also begun timing his commute and other trips to see how his performance modifications, like fuel injection, wider, stickier tyres, and aero bits, have made a difference. His aggression in these tests and the fervor with which he works on tinkering has given him and his car the nickname of Shiroi ōkami (The White Wolf) among his friends at TEGA. It also comes from how they both go howling through Japan’s forests in the late evening, where there is less of a chance for his liberal use of speed to be noticed. The Io sprint may only have 130 hp, but it can top out at an aero limited 150 mph and has a 0-60 of about 7 seconds. He’s also timed one of his frequent routes down the Hakone Turnpike at 4 minutes 46 seconds (when he’s found time to do so “uninhibited”). 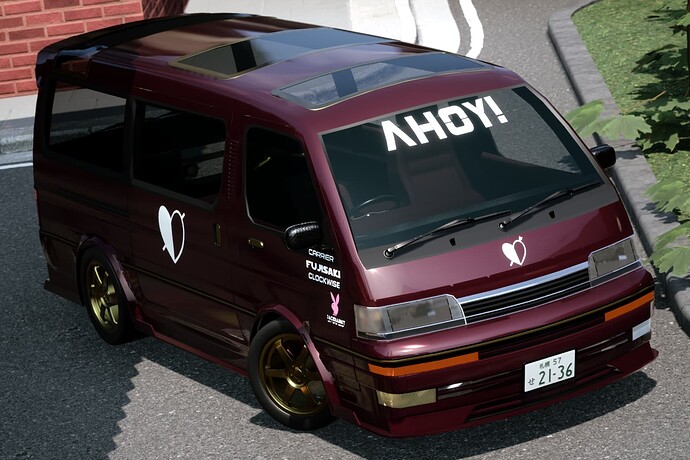