So I had sort of shower thought the other day about the campaign mode I figured I could share here. I feel the game really needs a little flavor to entice you to stay in a campaign other than watching the numbers go up. Some version of this may already be planned with the “News & Messages Archive” or the Grand Campaign, I’m not sure.

I think it would be neat to be able to take press shots for your marketing. Then at the end of the year (or whenever makes sense) your pics would be used in a generated newspaper clipping, magazine cover, or online article depending on the year. The titles could be based on any sort of achievements (or failures) your company or cars have accomplished. For example: “Your Company Named Premium Brand of the Year” or “The Facelifted Model 1 Trim 1 Continues to Be a Best Seller.” The article could have a small blurb based on the car’s stats and sales.

Another direction to take that is with brief car reviews and comparisons. Something like a “1998 Luxury Shootout” for the title and a statement or two like “The Model 1 is best in class in (insert stat above competitors), but falls short with (insert low stat) making a rival company’s car our pick for best luxury car of the year.”

I think stuff like this would help players develop a sort of headcanon or even create rivalries against AI companies which would make some players more invested in their playthrough. I understand if it would for a nightmare for translation etc. though.

Y’all feel free to post more suggestions below, this thread doesn’t have to be only about this idea

I had another idea for the campaign I don’t think I have heard anything about yet. It would be cool to have the option to spend the money to create a concept car trim while your car is developing to increase brand awareness and try to boost sales. It would also be a bit more incentive to design your cars in a campaign. I think this ties together with the news article idea from the first post as they would be a good way to see the market’s reaction to your concept car.

I seem to remember concept cars being planned back in the Kee version, where there were options for the type of production you wanted (Mass, limited, concept, or none). I think the idea was at least shown in little dev updates or something. Not sure what happened to that, maybe it got scrapped or maybe I imagined it from nothing.

I think back then the idea was that it would be a cheap way to improve familiarity with parts.

Bit of a weird one and not much use, but has a bit of “coolness”

Say you produce luxury cars or something high end. “notable” people drive it, these could be made up names, names of the devs or whatever, the president of that country you name it, and it would gain you loads of prestige or awareness for a few months as it circled the papers and news etc. Idk, small thing but its interesting.

To expand on that a little, your fancier cars could be featured in movies and whatnot too.

What I think would be nice is being able to divide your company into specialized divisions, such as for example a performance or luxury division of your main company (though that is quite a popular suggestion and probably something the devs might implement eventually). Just make sure to not go pre-bailout GM.

On the topic of GM, if you piss off your factory workers enough they should have a strike or something along those lines that just kills off your profit

On the topic of GM, if you piss off your factory workers enough they should have a strike or something along those lines that just kills off your profit

Yes. Similar to one of my favorite all-time games, Wall Street Raider. To bring a more “human” element to business decisions, it would be nice to see the odd ethical scenario that plays out that can affect prestige/reputation and/or sales.

For example, if sales are declining the natural inclination would be to cut shifts, outsource, or even idle/close a factory. That’s easy to do when you’re just “dealing with numbers”… but having/showing the human cost of decisions like that would bring an element of realism that I believe would take this game to the next level.

I spent countless hours back in the day playing Wall Street Raider, not just because I was fascinated with finance/trading/business - but because making those difficult decisions and seeing the outcome was really exciting.

Another game that I enjoyed with a similar, “how you behave affects the outcome” type gameplay was Fallout 3.

I’d love to be able to see my ai “competitors”, generic auto companies that represent the rest of the market.

Throw in a few “giants” that field a product in the major categories and a constellation of smaller companies that specialize in a niche, like what Jeep is.

That would give the players boundaries to bump against, push against, and be pushed back by. Toss in some numbers like company value and a successful enough player could buy their competition.

I got another idea actually, maybe the ability to cooperate with AI companies. As in, they’ll have some randomly generated parameters, you design a car to fulfill their criteria, and they will split the production and engineering costs & time between your company and theirs (so for example if you built a 50 ET car, you might only have 25 ET while the AI company shoulders the other 25 ET). So my idea is not full-on rebadging, more like cooperative engineering like the Toyota-BMW partnership in the A90 Supra/G29 Z4

I love this idea, maybe think of it as a “contract” with some requirments, maybe not random but to hit a specific market. To make that interesting maybe there should be bigger “rewards” for branching out and accepting a contract where you have low awareness in that demographic or something. It doesn’t have to be that complicated but i think this is a solid idea that really should make it into the main game.

This is more of a quick general idea than a campaign idea, but theres isn’t really a good place for it. Someday in the future it would be nice to take pics in different aspect ratios. A drop down menu for aspect ratios and an option for a guide to help line photos up would help (especially symmetrical shots). It could look something like this in photo mode. 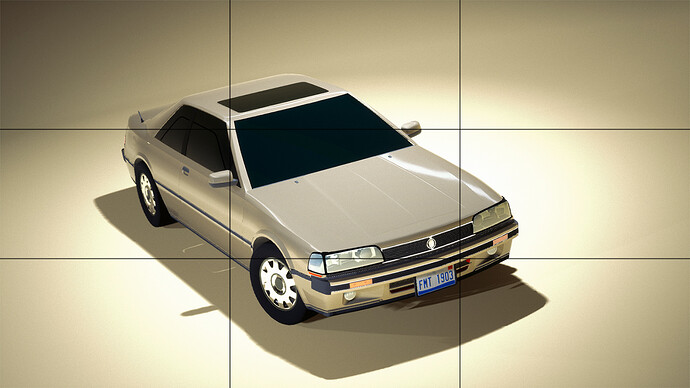 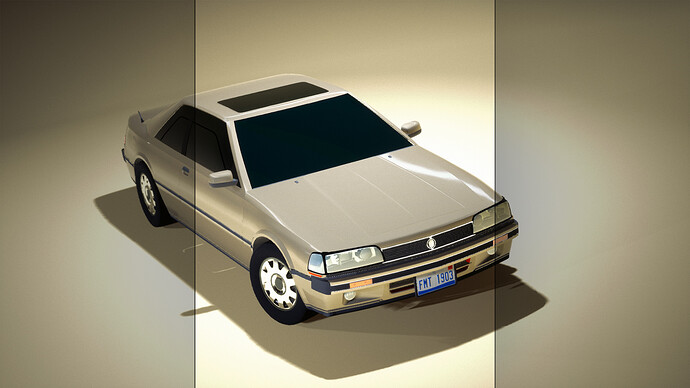 Could help with those Instagram photos too wink wink