Kevin loved tinkering in his garage. So much so, that when his wife Beth divorced him, that’s all she left him. He even wound up selling many of his projects to pay his legal fees. The Mustang he worked on with his dad, his Beemer that all his friends envied, and even the truck his dad left him when he died.

Depressed, Kevin started leafing through the magazines he kept at his tool bench, he had been collecting since high school. Caught up in the nostalgia of his glory years, he felt the need to start a new project, but which one? 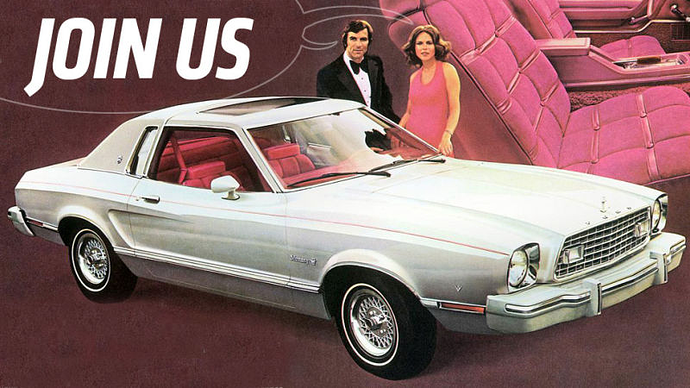 For this, submissions should be period correct, American cars, from the Malaise era (1973-1988), and have some ‘character’. In return, Kevin will reminisce, and share his thoughts on the vehicle. Since I’ve made this a review, rather than a challenge, there will be no winner, per se. There won’t be any particularly nasty commentary, but Kevin will not hesitate to call out BS for OP, min/max, or 3 fixture cars.

Quick question; are we to introduce our entries here in the thread, or is it better if they have a bit of a surprise effect going on?

I have one that is not American (it’s British actually), but made for the American market… if that is applicable?

Love the idea. I can have an excellent barge prepared in a matter of hours. Brace yourselves!!

To answer the questions:
@Nicking_HC: A single picture ad would be appreciated. As I said, I’m not big on deadlines. I would like to do a round of between 5 and 10 by the 3rd, so if I get more than that, I’ll just put them in a future (as I get to them) review. A single picture ad would allow other and future posters to conjure up their own memories, inspiring them as well.
@machalel & @Elizipeazie: Short answer would be, as long as it’s realistic for the time period. Long answer is, Kevin grew up in the Midwest of the U.S. Places like Detroit, Lansing, Milwaukee, Kenosha, ‘foreign’ was the “F” word. That didn’t mean there weren’t foreign cars; they were usually owned by the rich snobby people in the suburbs. Pertaining to my self imposed deadline, and goal of 5-10 cars, American cars will get priority.

EDIT
There will be subsequent reviews if there’s enough demand. Right now, I’m filling up for my 3 day weekend. After that, I have one more week of overtime, and then I am supposed to be cut back to part time; at which point, I’ll be looking for supplemental work, but should have more time to review and write. That being said, politics of the workplace being what they are, all of this is subject to change. I don’t want to exclude anybody, so in saying American cars will get priority, that just means that ‘foreign’ builds will be pushed back in the queue (not excluded). I just want to be fair, and of course “write what I know” (to be honest, I never saw a British car that wasn’t in a Bond movie, until I was an adult, and outside of Beetles and Golfs, German cars were another mystery) 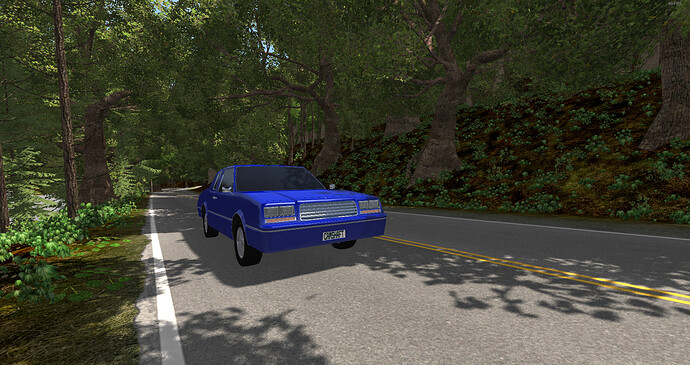 From Albatross Motor Company comes the latest in American 2-door luxury, the 1979 Albatross 570C. Designed and built in Glendale, California, this car is propelled by a powerful 350 cubic inch V8, producing 193 horsepower and a meaty 254 lb-ft of torque. Power is sent to the front wheels by a 3 speed automatic transmission, allowing a 0-62 time of 9.3 seconds, and a top speed of 116 mph. Despite this impressive performance, the Albatross 570 is able to run on regular unleaded gasoline, and manages a respectable 16 MPG highway thanks to the standard ALBERT (Albatross Lean Burn Emissions Reduction Technology) carburetion system. Pricing starts at just $10,999. Please see your local Albatross dealer to learn more.

That didn’t mean there weren’t foreign cars; they were usually owned by the rich snobby people in the suburbs. 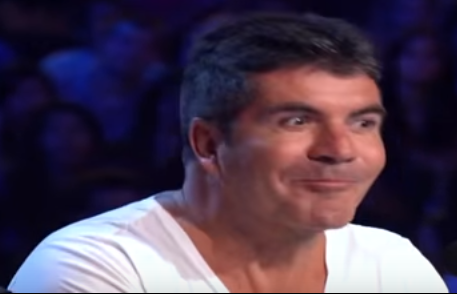 Oh, I could FLOOD you with malaise… lol

Let’s see which design I’m going to foist on you for this.

I’ve for a few ideas myself…

Designed to be Epoch’s “World Car”, it was obvious from the styling that America was the main target market. The Augustus ended up being a compromise in almost every aspect, with the exception of passenger comfort and safety. Whilst the interior fitout was fairly standard for its day, the Augustus featured several innovative and class-leading safety features such as 3-point seatbelts for all passengers, front passenger and driver airbags, and anti-intrusion bars. The car’s engine, a 2694cc (164cui) straight-6, put out 77.5kW (103HP) at 5400rpm. When combined with the 4-speed automatic gearbox, the Augustus 27 could reach 100km/h in just under 13 seconds, and topped out at 158km/h (98mi/h). Pricing for the Augustus 27 came in at $2,768 ($10,697 adjusted, 0% markup). 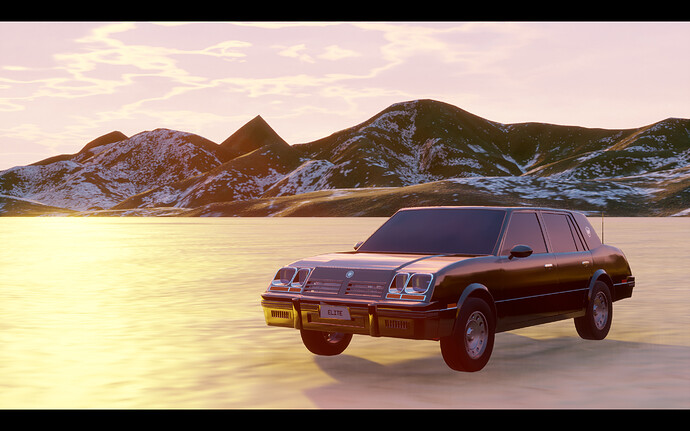 Alongside the standard car, was the “sports” model, the Augustus 27 Rex. Based upon the same platform and engine, Epoch’s engineers managed to wring out more power to the tune of 115kW (154HP) at 6100rpm. This improvement was somewhat dampened by the more luxurious and well equipped interior, however performance still improved to demonstrate a 0-100km/h time of 9.6 seconds, with a top speed of 175km/h (109mi/h). All this came at a premium of around 20% extra cost. 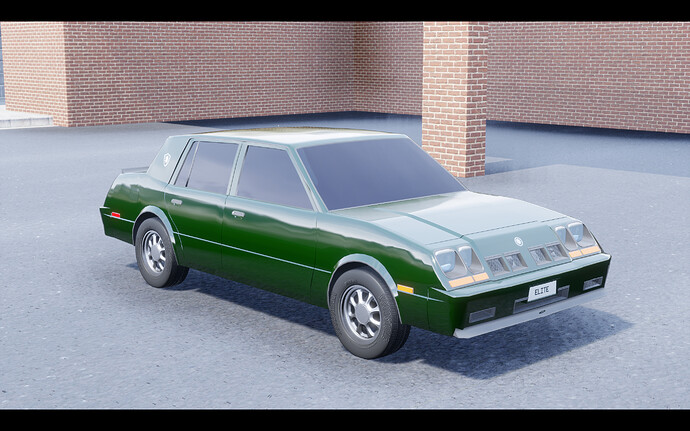 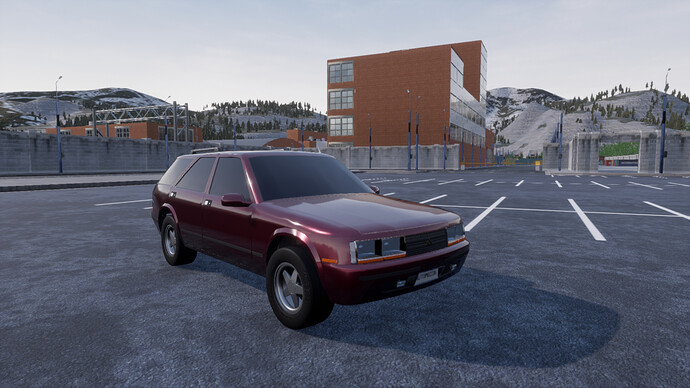 In 1983, Ardent Motors unveiled their second generation Chancellor. For the first time, Ardent’s mid-large size car sent power to the front wheels, eschewing the traditional rear wheel drive of generations past. Not only that, but gone was the solid axle suspension, replaced with a semi trailing arm design.

Though the engine choices were the same familiar 4.0L V6 (DL and GL) and 4.8L V8 (Optional GL, standard Limited), both were upgraded from carburetion to throttle body injection.

The weight of the cars and power robbed by early smog equipment translated in rather poor economy, particularly for the V8 model. With a rating of 13 MPG city and 19 MPG highway, V8 Chancellors were not sought after by the thrifty crowd.

They did, however, pack a punch. With 180 horsepower, a V8 Chancellor with the 4-speed electronic automatic transmission could hit 60 MPH in 8.5 seconds, and reach a respectable 128 MPH. A tad slower if you were packing the family and luggage.

By far the most popular trim was the mid-range GL, with about 70% of those being produced with a V6 (15% of all V6’s were manuals), and the remaining 30% being V8 automatics. Chancellor GL models had plush pillowed, veloured seats with driver’s seat power adjustments, front deluxe wide buckets, power steering, mirrors, windows, and door locks, and central locking activated from the driver’s keyhole. Additional creature features such as cruse control, a 60-watt 4-speaker AM/FM radio with equalizers, full carpeting, tachometer, and lighted vanity mirror in the glove box were also standard on the GL trim. 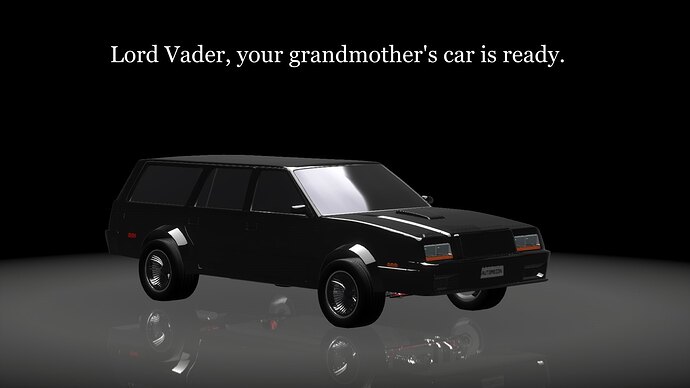 It’s got a 5-speed because I like to row my own gears, a 60 degree turbo V6, and a chassis that’s probably a little too firm for a proper 80’s car. I like it a lot in Beam NG. It might make a good parts chaser for Kevin if he doesn’t mind the abysmal fuel consumption.

edit to add: this was inspired by a real car. back in the early 90s (?) some guy competed in Car and Driver’s One Lap in a fullsize wagon with Grand National power. I thought it was the coolest thing.

That is an excellent clone and I appreciate it. Though it’s malaise by definition, I’m not sure its malaise in spirit. Nonetheless, it did inspire me to write something, so I’m going to use it. I would just ask that future entries be a bit malaiser

I’ve sent you 2 versions of the Gavril Barstow from the malaise era. 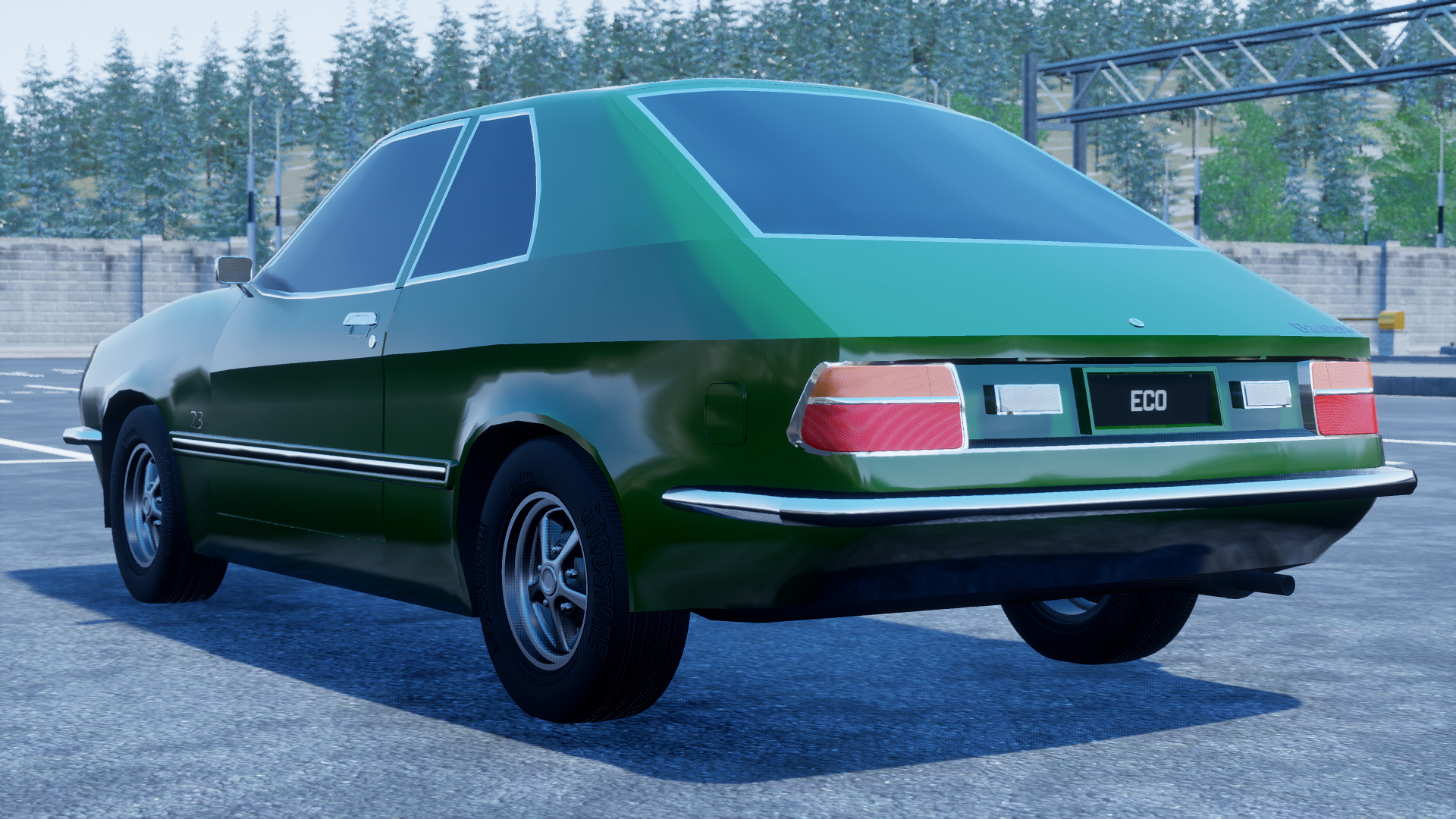 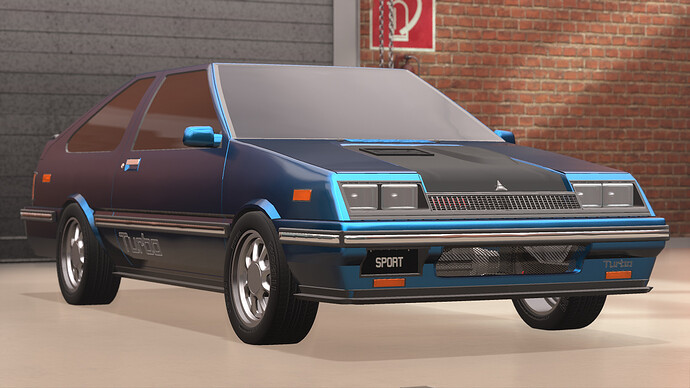 Top of the line in… nothing, really. 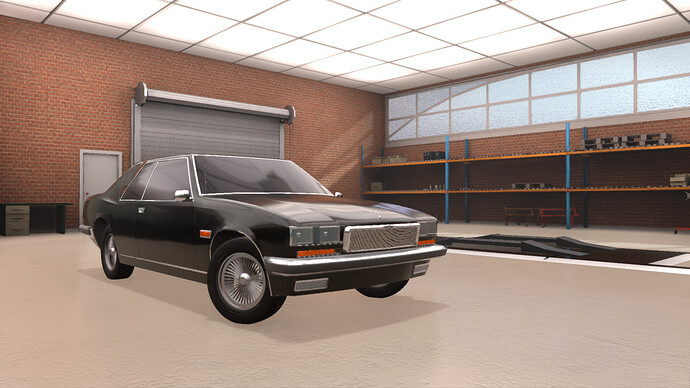 The 1985 Vexata Virage. Too chrome for its own good. 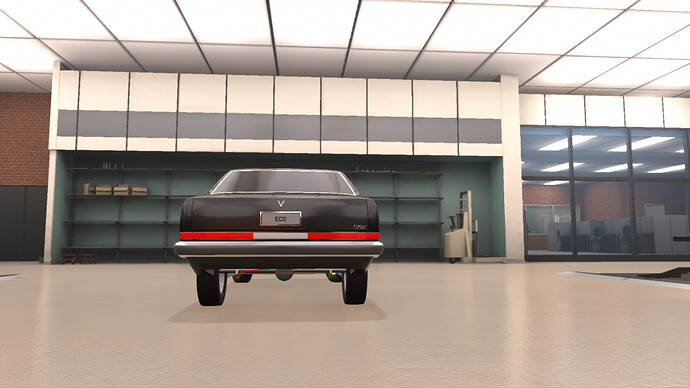 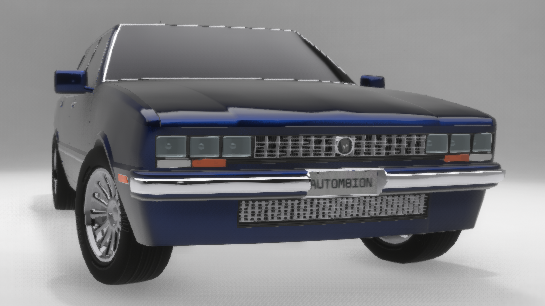 In response to the new Ardent Chancellor being released, Bogliq USA refreshed the Mutineer to ensure Bogliq would remain ahead of their rival in the sales race…

Despite being an older design, the Mutineer had superior fuel economy, 0-60, top speed and the engine was also more powerful than the Ardent’s boat anchor, packing 230BHP standard!

The only benefit the Ardent had was purchase price; the Mutineer Empower was just over $508 US more expensive per unit. 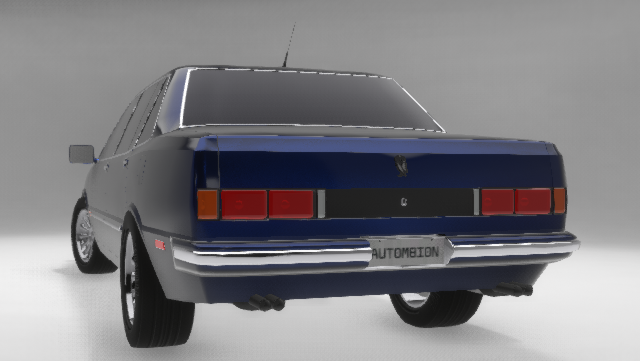 However, if you’ve already got $9500 then you’ll be unlikely to begrudge the extra $500 for what is clearly the superior luxury sedan! No wonder Bogliq USA is the best known brand in all America!!!

LORE here for those who want to know more…

(OOC: @VicVictory, let’s find out who will reign supreme this time!

After the much-maligned and underpowered second-generation car, Morton’s engineers knew they had to bring back at least some of the performance which was lost in the Corsair’s first redesign. The resulting car, the Corsair III, was powered by a 5.0L V8 driving the rear wheels via a five-speed manual gearbox (as shown here), with a four-speed automatic transmission being optional. 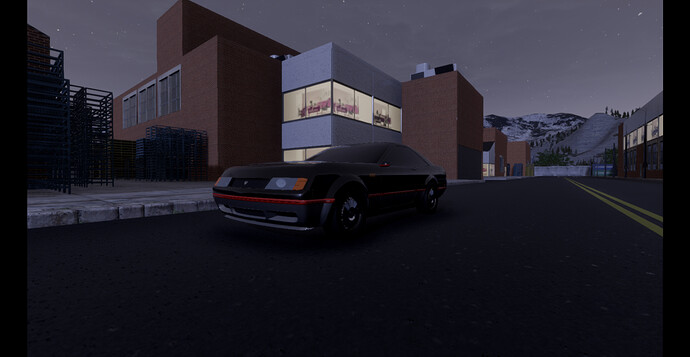 The cleaner, more aerodynamic styling raised some eyebrows, but gave the Corsair III an unmistakable look on the road. And with 225 horsepower on tap, it was less likely than its predecessor to embarrass itself when lining up at the traffic lights against other pony cars.

To me, the North American malaise scene means “wasted potential” above all else. And there is one car in my lore that proves that more than any other… 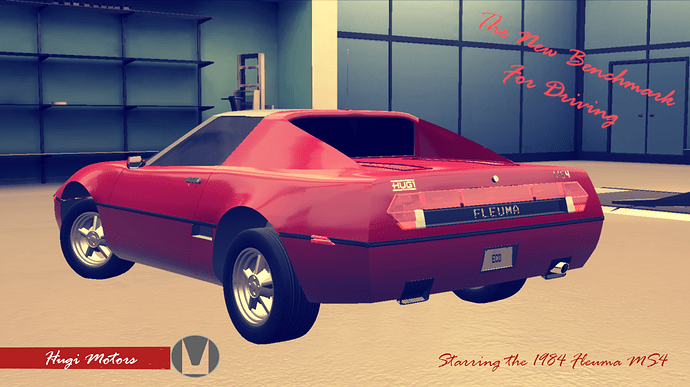 The Fleuma MS4. Monocoque body, all-around independent suspension, a very aerodynamic body. Sounds like a nifty cheap sports car, doesn’t it?
Well too bad, because Hugi did not want the Fleuma to garner the attention that could be going to the Rioter. And the MS4 is the most basic, most detuned Fleuma of all. So you also get a 102-horsepower, 2-barrel carburettor 2.2L inline-4; a family car engine going by the nickname of “Steel Severn”.
Even at 920kgs, no miracles could happen in an underpowered MR coupe, one that also offers a predisposition to oversteer…

And this also counts as the Fleuma Mk.1’s official debut! Through its weakest possible side, but I didn’t say this was sports driving’s Eldorado (the ad says it, but you know marketing).