I tried to create the engine and car similair. So the Body has a 2.5 m wheelbase, similair to the original car and the engine is a 3.4L Inline 6.

The largest inline 6 engine the body i chose takesis a 1.6 L, which is a joke. And I cannot replicate the power 277 bhp of the M88 engine on a 1.6L. Mid Engine cars need to allow for larger engine in my opinion, because this is really lacking.

Which body exactly are you using, and in Transverse or Longitudinal placement? that matters a lot for what you are trying to do. Suspension will also matter, as certain suspension types cut into engine bay space 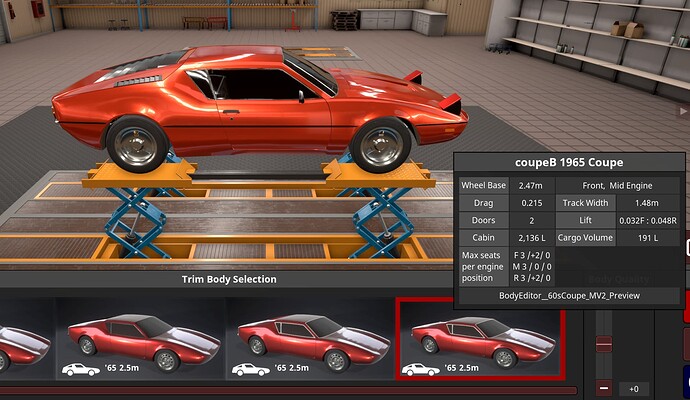 I tried in all configurations actually, both Transverse/Longitudinal and each type of suspension. None work

Acutally, I feel stupid, I found a combination that works, Transvers and Rear Struts… I was pretty sure i selected every permutation. Ok will work this for now. Should be Double Wishbones on Front and Rears, but oh well, better than nothing

It’s not just that the bodies need bigger engine bays, it’s that their engines are now mounted too far aft in mid-engined configuration, forcing us to move the weight distribution slider all the way to the front - but this places the engine so far forward that some components will overlap with 3D interior fixtures, assuming those are fitted.